A 72-year-old male is admitted to the Intensive Care Unit (ICU) with anuric renal failure and haemofiltration is commenced. On the morning ward round, the haemofiltration effluent bag is noted to have a reddish colour.

[picture of effluent bag is not from the official college paper] 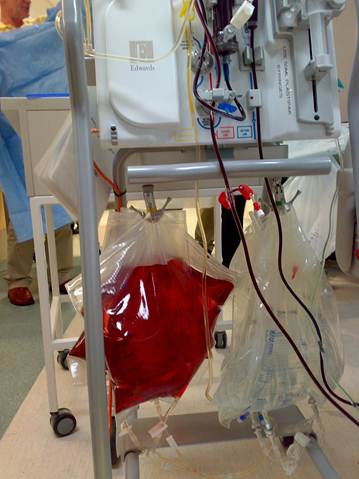 His blood test results are given below:

The question is very similar to Question 5.3 from the first paper of 2009, and though the college uses a different image for this version, the two photographs are so nearly identical that the author was compelled to re-use the image from 2009. Essentially, both pictures show a full effluent bag which is filled with a translucent red fluid, uniformly red. This is in contrast to a picture of circuit rupture, which looks a little different: because of the fact that whole erythrocytes have made it into the effluent, the fluid separates into layers (the erythrocytes sediment at the bottom). Free haemoglobin, in contrast, would remain suspended for much longer, though conceivably if the bag were left neglected somewhere, then it too would probably separate into layers over time.

b) Question 5.3 from the first paper of 2009 only asked for two causes, and the pass rate was 39%. Clearly that was too easy.  The possible explanations are: