Diffusion as a mechanism of solute removal

This chapter is related to the aims of Section H3(i) from the 2017 CICM Primary Syllabus, which expects the exam candidate to "describe the principles of dialysis and renal replacement fluid" to a "L2" level of competence, which presumably equates to vague recollection and superficial understanding. Nowhere else is dialysis mentioned in the syllabus document, and none of the Part I past paper questions have ever interrogated this subject.

Given that dialysis is a major player in the armamentarium of the critical care specialist, the lack of college attention to its fundamental scientific principles is surprising. The topic occupies a strange gap in the CICM curriculum; nothing whatsoever is done about it in the early stages of training, and then suddenly in the Part II exam the trainees are called upon to troubleshoot the dialysis circuit, define items of nomenclature and comment on the different methods of anticoagulation. One can of course see the reason as to why the basic sciences and fascinating engineering challenges of ICU dialysis are neglected by the CICM examiners. Every curriculum is a finite space within which much material must be crammed, and not every single little thing can be shoved in there - by necessity there must be some omissions, and in particular such material is omitted as would increase the "irrelevant difficulty" of the exam. Into this category, unfortunately, must go a lot of the interesting stuff about dialysis. Therefore, the inclusion of these detailed discussions of dialysis here is made with the expectation that the savvy exam candidate will not allow their time to be wasted, and will limit their reading to the summary boxes.

Diffusion is one of the mass separation processes which underpin the principle of dialysis.

Rate of diffusion (the solute diffusive flux, Jd) is influenced by several factors:

Probably the best single reference to discuss diffusion as it relates to dialysis is the introductory article by Ronco et al (1998), which has aged gracefully because it came well after all the major modernising changes took place in membrane technology. There is also the excellent vintage article by Sargent & Gotch (1979) which is more pertinent to old-style filters (but of course the physics are the same). The definitive text to answer every possible permutation of question on the topic of molecular diffusion would probably have to be Transport Processes and Separation Process Principles by Genkoplis (2003, 4th ed). It seems unreasonable to offer the entire 1100-page book as a reference - probably just Chapter 6.3 (Molecular diffusion in fluids) will suffice.

Diffusion describes solute transport across a semi-permeable membrane generated by a concentration gradient.

This is the definition one would want to quote whenever a dialysis question brings up the question of diffusion. It is also the definition used by the excellent 2016 article by Neri et al, where the "et al" consists of an all-star cast including Claudio Ronco, Rinaldo Bellomo and Jean-Louis Vincent. Exactly how much these rockstars contributed to Mauro Neri's article is unclear, but the dull thud made by their names makes it a good reference for quoting at professional enemies. Other definitions obviously also exist, and they vary in their level of cumbersomeness (cumberosity?). For instance, the same rockstars edited a textbook of critical care nephrology in which Edward F. Leonard defines diffusion as "the molecular movement of a species that is induced by microscopic random movements coupled to the non-uniform distribution in space of the species". 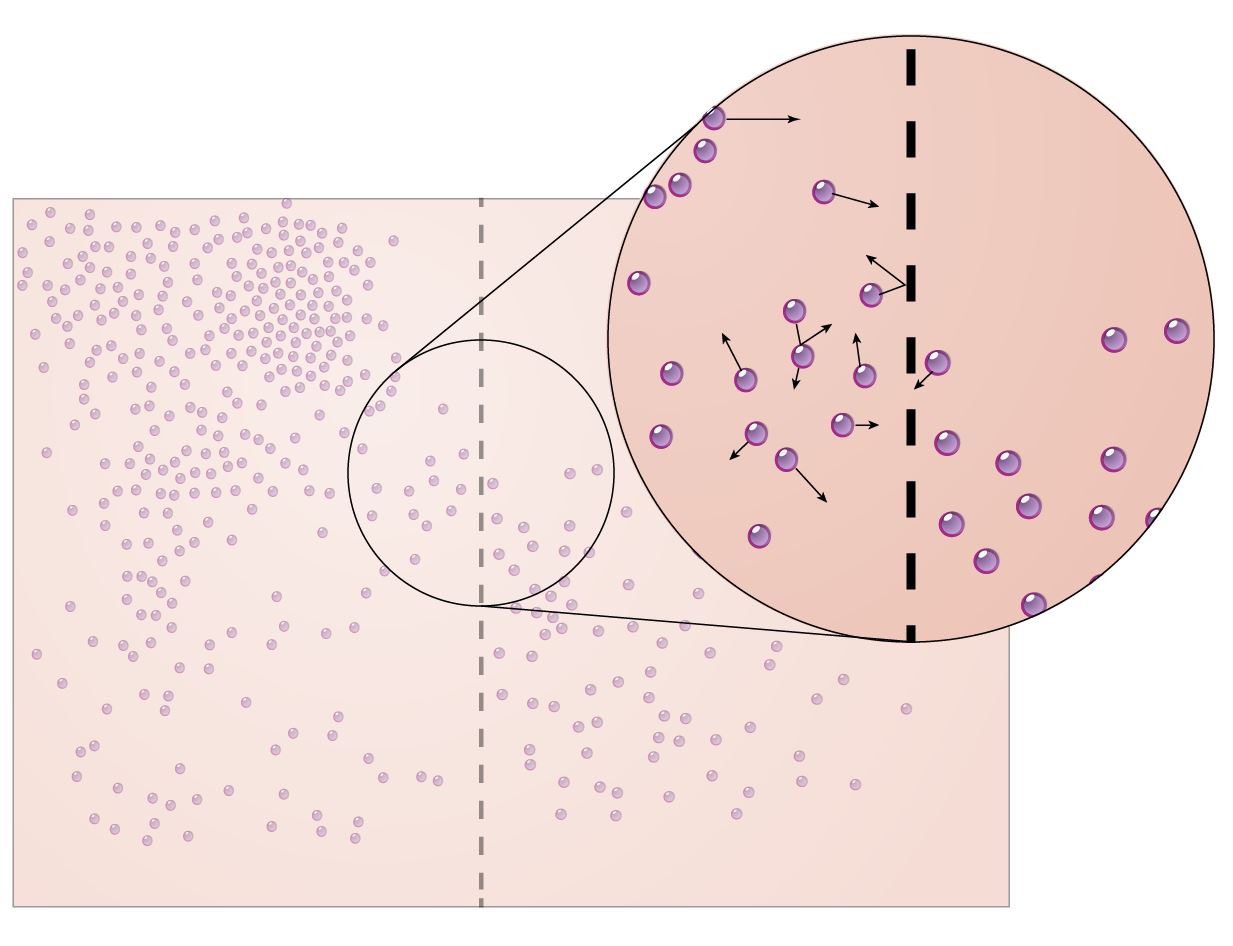 Diffusion depends on the fact that molecules move randomly around a chamber, and statistically, they will eventually distribute themselves equally on both sides of a semipermeable membrane. For the purposes of this chapter "diffusion" will always refer to diffusion across the dialysis filter membrane, but in reality diffusion is diffusion, and it is exactly the same for all semipermeable membranes and solutes, whether they be biological membranes, plastic filters, alien forcefields or ectoplasm. This is otherwise known as "ordinary" diffusion, or Fickian diffusion (after Adolf Eugen Fick whose law of diffusion everybody learns about at some stage or another of their medical degree). There is also "forced diffusion", where diffusion is driven by something other than concentration gradients (eg. by electrical, magnetic, gravitational or centrifugal forces) but this is well outside the scope of even this thematically promiscuous chapter.

The main force determining the rate of diffusion is the concentration gradient, for which dialysis-related literature uses the abbreviation dc. The equation describing this gradient is unsurprisingly simple: it is the difference between two concentrations, i.e. one concentration subtracted from the other.

Ordinarily, membrane characteristics would be the most important factor in diffusion. A thick nonporous membrane is unlikely to permit diffusion no matter how high the concentration gradient. However, in the world of dialysis this issue is less relevant because of the fact that the dialysis membranes are designed against very specific engineering characteristics, among which is high permeability. In the presence of a nicely permeable membrane, the concentration gradient becomes the next most important factor.

Factors which govern the rate of diffusion (the solute diffusive flux)

The rate of ordinary Fickian diffusion is determined by several factors:

The overall concept is the concept of the solute diffusive flux, Jd.  "Flux" in this context is a term which describes the number of molecules of a species that passes through a unit area per unit time.  It is usually expressed as moles per square meter per second. Solute diffusive flux is described by the following equation: 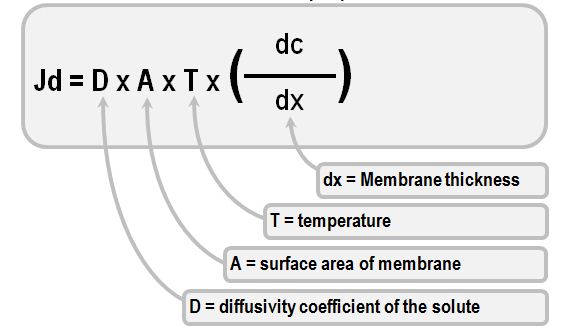 The concept of a "diffusivity coefficient" demands closer attention and probably a H2 level heading.

This is a measure of how fast a substance diffuses across a solvent volume, expressed in  length squared per  second. The higher the diffusivity coefficient, the faster the substance moves across a membrane. Obviously, this is different depending on which solvent the solute is moving through. For example, in air carbon dioxide has the diffusivity coefficient of 16 mm2 per second, and 0.0016 mm2 per second in water.

We owe the concept to Einstein, who came up with the diffusion coefficient equation, which is too complicated to be discussed here. But, lets go at it anyway, using small print to diminish the emphasis on this ridiculous digression into physics.

Thus, the diffusivity coefficient is determined by the gas constant, the temperature, the viscosity of the solvent and the radius of the solute particles. Of course this equation generally assumes that all molecules are spherical blobs, which is plainly wrong nearly all of the time, but which is close enough for government work.

If diffusivity coefficient is inversely proportional to the molecule's radius, then it would therefore be inversely proportional to the cube root of the molecule's volume (assuming it's a perfect sphere). Making another assumption about the relationship of molecular mass and molecular volume, if you increase the molecular mass of a solute by eight times, you only halve the diffusivity coefficient (i.e. it diffuses twice as slowly even though it is eight times as heavy). This is well demonstrated by the difference between the diffusivity of albumin and urea: albumin is about 1000 times heavier, but only diffuses 15 times more slowly.

The abovequoted diffusivity coefficients for carbon dioxide might lure the reader into thinking that diffusion is usually rapid and over relatively large distances. This is not the case. Generally speaking, for physiologically relevant small molecules (i.e. ones which you think about when you dialyse somebody, like urea and the ions) the diffusivity coefficient values are in the order of 10-5 cm2/sec, ie. measured in square microns per second. One also needs to remember that this diffusivity coefficient is in solute -  ie. the membrane has not been factored in. The addition of a membrane slows things down quite dramatically, and at a certain level abort the transport entirely. This is the "pore size barrier", which limits the usefulness of dialysis alone for the removal of molecules larger than 3000-5000 Da.

The best resource for such definitions seems to be the ADQI site, which (in the "ADQI Reports" section under "CRRT") has a "Definitions/nomenclature" workgroup statement. The definitions in this statement are used wherever possible in the following text.

Sargent, John A., and Frank A. Gotch. "Principles and biophysics of dialysis." Replacement of renal function by dialysis. Springer, Dordrecht, 1979. 38-68.