Physiology and pharmacology of colloid fluids

This chapter is relevant to Section I2(i) of the 2017 CICM Primary Syllabus, which expects the exam candidates to "An understanding of the pharmacology of colloids and crystalloids (used in Intensive Care Medicine)". It is of course pure speculation, but one can imagine the smoke-filled room of a late night board meeting where somebody's raised objection from the Court of Examiners resulted in the grudging inclusion of that parenthesised appendix ("Gary, we're all just really tired ok? Fine, whatever, let's just put it in"). Even more tempting for the imagination is the fact that all the colloid-related SAQs pre-date this syllabus document, and ask about colloid fluids which are basically never used in the modern ICU, such as dextrans (Question 1(p.2) from the second paper of 2009) or hydroxyethyl starches and gelatins (Question 10 from the second paper of 2010). Even in the controversy-loving world of the CICM Second Part exam, there has been no colloid-related questions since Question 29  from the second paper of 2007 and Question 1 from the second paper of 2001.

In short, it appears that this is no longer an area which the examiners are interested in, and does not need to be included in exam preparation. This is fortunate, as it renders the following series of irrelevant digressions more forgivable. For example, one has not seen a bag of hydroxyethyl starch in an ICU since ANZICS smote its ruin upon the mountain side, which means one does not need to take the discussion of this substance particularly seriously. That is also the spirit of the colloid vs. crystalloid chapter in the Fellowship Exam preparation section, which has little in terms of useful content but a liberal plenty of historical trivia.

Frustrated by a lack of medical or physiological text on the topic of colloids, the author was driven out of his comfort zone and into the cold wasteland of industrial chemistry, finding shelter under an old copy of Duncan Shaw's Introduction to Colloid and Surface Chemistry (4th Edition, 1992). For an explanation of the theoretical benefits and the actual pharmacological properties of colloids, the best reference turned out to be a really old paper by Dasta et al (1984).

What the hell is a "colloid"

The term "colloid" gets tossed around a lot (colloid osmotic pressure, anybody?). In chemistry, the term "colloidal" has a specific meaning, which (like everything) is defined by IUPAC:

"A state of subdivision such that the molecules or polymolecular particles dispersed in a medium have at least one dimension between approximately 1 nm and 1 μm, or that in a system discontinuities are found at distances of that order."

Without delving into the deep lore of colloid chemistry, one needs to point out that these strict boundaries are in fact at least partially arbitrary, and at no stage during the development of the field could anybody stand up and draw scientific lines between a solution, a dispersion, an emulsion or a suspension. Originally, Herbert Freundlich (1925) used particle size to discriminate between them, on the basis of the fact that particles in a size range of below 1 nm tend to behave differently, and particles above 100nm tend to behave differently, and what's in between also has some unique properties. For example, when you dissociate into particles smaller than 1nm (about 10 times the diameter of a hydrogen atom), you tend to be unaffected by the Tyndall effect (which causes light to scatter from particles, and makes colloids and emulsions opaque and usually white). On the other hand, if your particles are larger than 100nm, they will tend to settle and separate under the effects of gravity.

Only the group of particles in this inbetween medium size range can be colloids. Further more, to be a colloid rather than just a plain dispersion, you need the following characteristics:

Those last two are rather important, and rather difficult to grok. It does not help that the entirety of medical literature (including this website) refer to colloid solutions and say that, for example, albumin is dissolved in water, when in fact it is most definitely not. Real chemists use terms like dispersed phase and dispersion medium to refer to colloids out of respect for scientific fact. Perhaps it helps to look at a table like this, which describes the breadth of the term "colloidal system": 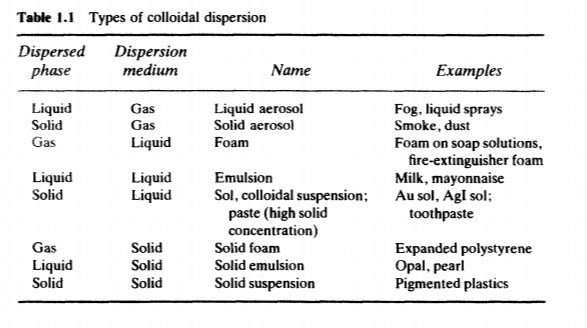 This bunch of properties lends colloids some interesting characteristics which are common to the entire group:

The main reasons behind these properties, it is thought, is the massive surface area between the solvent and the particles, which is made possible by their tiny size. That massive surface area is also the reason these substances can exert a colloid osmotic pressure effect.

At initial inspection of the concept, one would not think that any such pressure would be generated, as the colloid is by definition a mixture of a solvent with something that remains insoluble. So, how could it possibly contribute to osmotic forces, you might ask? Well. The surface of the particles which comes into contact with the solvent is solvated by the solvent, meaning that at least one molecular layer of solvent forms on their surface, and this bound solvent must be treated as a part of the particle. In that sense, the 50 kDa particle surrounded by a layer of solvent will be osmotically identical to a 50 Da ion, from the solvent's point of view, i.e. they are both one particle and therefore osmotically equivalent. Still, in practical terms, anything that gets into the million-Dalton range is going to be too large to exert a measurable osmotic effect (purely because there's not going to be that many particles).

Putting aside for a moment the cries of unreformed albumin-lovers ("But the antioxidant scavenging, the glycocalyx!"), the main rationale for the use of colloids in medicine is most often to expand volume, and the rationale for their use can be summarised as follows:

There are other pharmacological effects which people may point to, such as the binding effects, antithrombotic properties and bloodflow-affecting rheological changes which might make these substances appealing for specific tasks (eg. to perfuse a delicate vascular pedicle of a free flap), but looking at the college comments to the colloid questions, none of those were viewed as an essential part of the answer. So, for the purposes of the CICM First Part exam, the point of a colloid infusion fluid is to increase the capillary oncotic pressure and influence the Starling equation in a way which favours the movement of fluid into the intravascular compartment.

Properties of the ideal colloid

This came up in Question 1(p.2) from the second paper of 2009,  which very clearly references The Fluid Book by Kerry Brandis. Specifically, the linked page from his online fluid physiology textbook matches the wording of the examiner comments a little too precisely to be purely coincidental. Looking for a common source for all of these works working backwards through date-filtered search results and bibliographies, one comes across Roberts & Bratton (1998):

"The ideal colloid fluid for intravascular fluid resuscitation would be free of antigenic or allergic properties, exert a sustained intravascular osmotic pressure and pose no infectious risks. It would not require cross-matching, would have a long shelflife with simple storage requirements and, of course, be very inexpensive".

A similar-looking but slightly different shopping list of properties was generated by Dasta et al, in 1984:

"The ideal colloid should possess the following properties: an oncotic pressure comparable with plasma; a reasonable duration of intravascular volume expansion; a lack of reliance on renal excretion alone for elimination; no antigenic, allergenic, or pyretic properties; no interference with typing or crossmatching of blood; easy sterilization and pharmacologically inert; and they should be inexpensive and easy to manufacture."

The term does not appear in any earlier publication other than as a reference to ideal chemical properties, i.e. a colloid which does not have any weird nonlinear behaviours unpredictable through standard equations. Remixing these published works with Brandis yields this:

The Fluid Book lists a few other criteria (eg. "Half-life should be 6 to 12 hours") which have been omitted from the above as a means of saving space, and because their desirability is questionable (perhaps one would prefer a longer or shorter duration of action for their colloid?). Additionally, one could go on listing an infinite number of undesirable side-effects which you would not want the ideal colloid to have (eg.  "does not cause pregnancy"), but  thats seems like an ineffective use of the author's time.

Apparently in 2010 this seemed like a topic with a "high and common clinical relevance". Needless to say, there's no real "official" classification system here, and the exam candidates were left to guess what the examiners were thinking. Turns out, they wanted a classification along the lines of industrial origin: "Candidates were expected to mention colloid intravenous fluid were either semi-synthetic or plasma derivatives". That, reader, is difficult to argue with, as it has the same legitimacy as any other possible classification.

As these matters no longer seem to have priority in the minds of the examiners, it would be wasteful to squander the reader's attention on the fine details of hetastarch pharmacokinetics, and so instead this table from  Langer et al (2014) is offered here, detailing the content of the most common colloids: 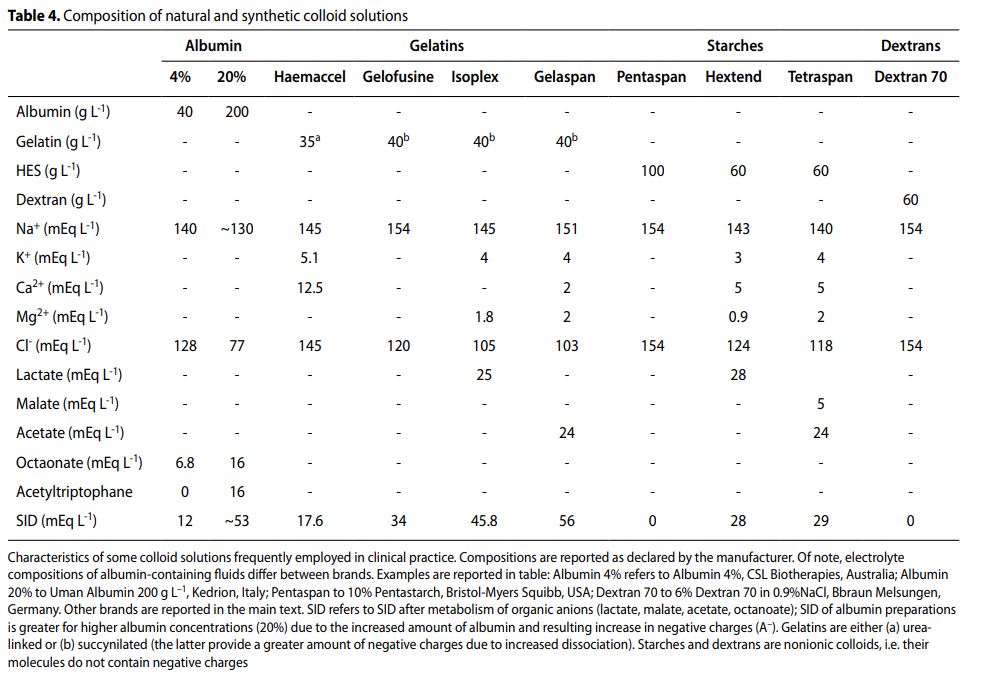 Additionally, an even better table from Dasta et al (1984) gives pharmacokinetic and pharmacodynamic properties. It is left here as a reference, mainly for historical and documentary reasons. 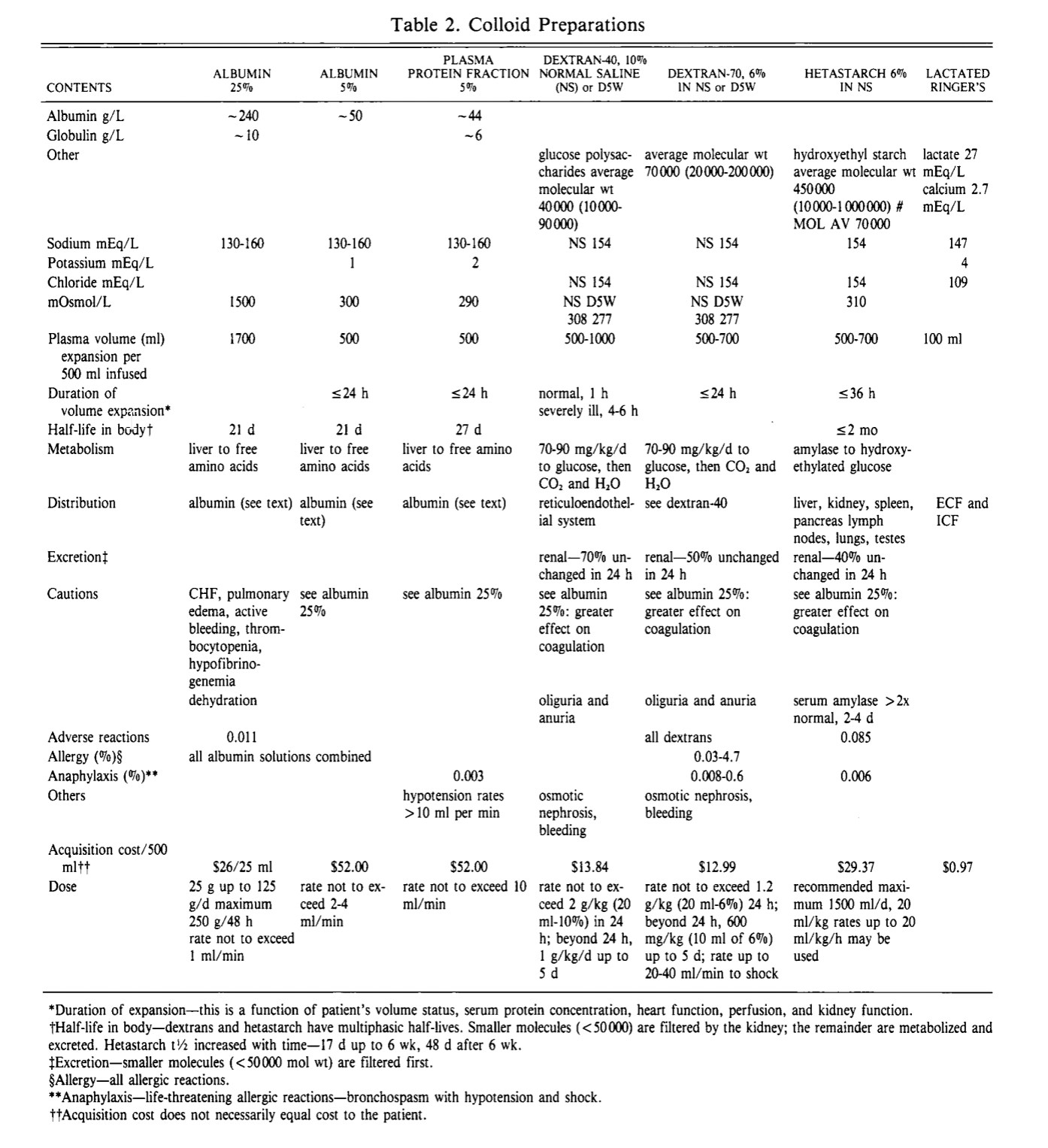