Response to 1L of 5% dextrose

What am I giving? The litre of 5% dextrose is 278 mmol of dextrose (d-glucose). Every litre contains 50g of glucose.

The dextrose is taken up rapidly into the cells. Its rate of uptake varies. Usually, plasma half-life of a dextrose bolus is no greater than 15 minutes, in the absence of diabetes.

What remains is free water. This, needless to say, is not going to hang around in the intravascular space. It distributes itself according to its normal compartment proportions; that is to say, 2/3rds will go into cells within the hour, and of the remaining third 75% will join the interstitial fluid.

Not only does the body gain 1 litre of solvent water from the actual bag of dextrose; each molecule of dextrose itself is metabolised into 6 molecules of water and 6 molecules of CO2. Thus, from 278 mmol of dextrose the body gains an additional 1668 mmol of H2O, or about 30ml. The numbers below do not contain the extra 30ml of water, because the contribution of such minutae is confusing and bewildering. All the compartments become slightly diluted, to an equal degree (because the proportional gain of water is the same). The osmolality decreases by about 6.5mmol/L – from 290 to 283.5.

The change in osmolality is 2.3% - within the osmoreceptor sensitivity threshold. Vasopressin release in decreased, and over its next 3 halflives the urinary excretion of free water gradually increases.

The intravascular compartment volume increases by 80ml – from 5000ml to 5080ml. The increase in intravascular volume is 1.5% - outside the volume receptor sensitivity threshold. Has the BSL increased?

Yes, it certainly has. Lets do a quick calculation on a hypothetical hypoglycaemic patient who presents to triage with a BSL of 0 mmol/L.

Let us assume you grabbed your hypoglycemic patient and cannulated them with some sort of massive rapid infuser sheath, rated for a maximal flow rate of 1000ml/second; thereby you have managed to infuse the entire bolus of 5% dextrose into them within the blink of an eye, miraculously avoiding a catastrophic rupture of the right atrium. 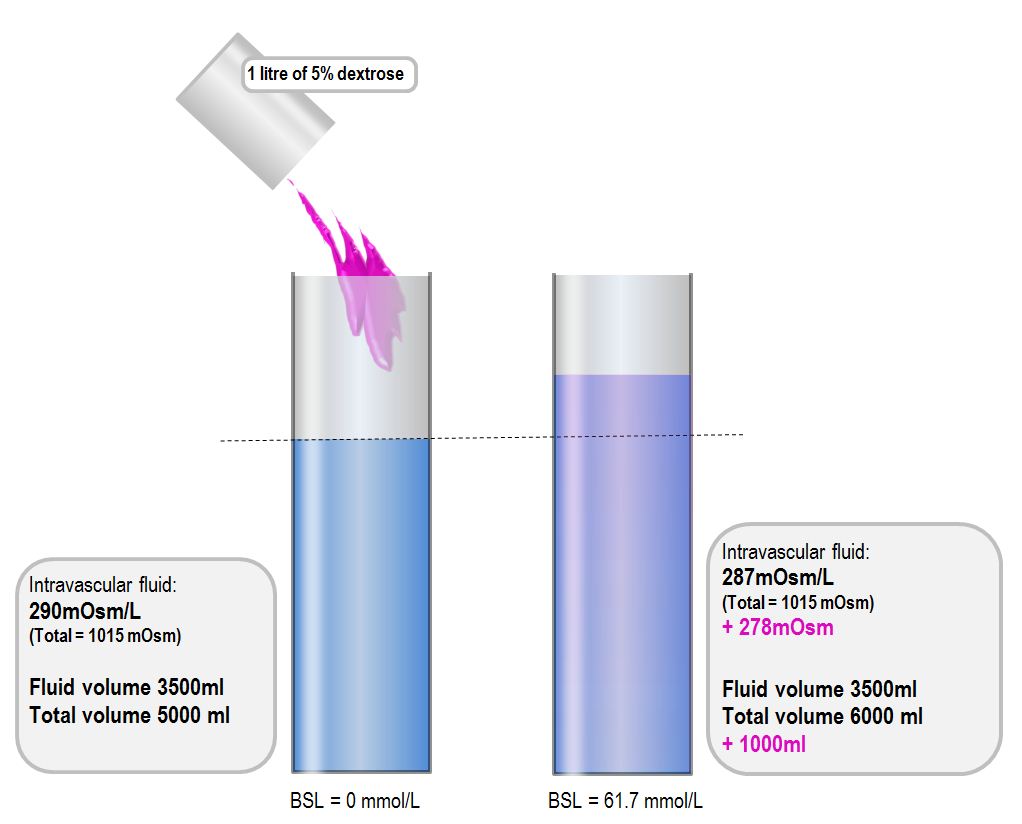 This infusion has suddenly contributed 1000ml of water and 278mOsm of dextrose.
The plasma volume is now 4500ml, and the plasma osmolality is now 287 (1015 + 278 divided by 4500). This is the split second after our rapid bolus, and the dextrose has not yet had a chance to get absorbed by cells.

The metabolic fate of infused dextrose

Various GLUT transporters are responsible for the uptake of glucose into tissues, and these will one day be discussed elsewhere, with loving attention to detail.

The rate of dextrose uptake (and thus the rate of BSL returning to normal) varies wildly even among healthy individuals. In a more realistic situation, with a less insane method of dextrose administration, the cells would have plenty of time for dextrose uptake.

This one time, Lobo et al infused some healthy volunteers with 2 litres of dextrose over 1 hour. The average BSL at the end of this hour was around 15. At the end of the second hour, it had already dropped to normal (actually, on average it was slightly low).

This gives the impression that even at brisk rates of infusion, the dextrose absorption mechanisms of a healthy person can keep up.

Not only that, but the aforementioned healthy volunteers all ended up with glucose in their urine, which suggests that osmotic diuresis was taking place. It is difficult to quantify the amount of additional water lost in this way.

Also, see Dileep N. Lobo's excellent thesis on fluid physiology, which contains some interesting studies performed on healthy male volunteers.
People dont do that sort of stuff any more, which is sad.