Response to 500ml of concentrated (20%) mannitol

The stages of a response to mannitol infusion

As one might expect, injecting a large amount of a hyperosmolar chemical into somebody has some unusual effects.

The physiological consequences of mannitol infusion are complex, and there are several distinct stages.

The stages of a physiological response to mannitol infusion

What are we giving?

20% mannitol is 100g of six-carbon sugar alcohol, delivered in 500ml of fresh water. 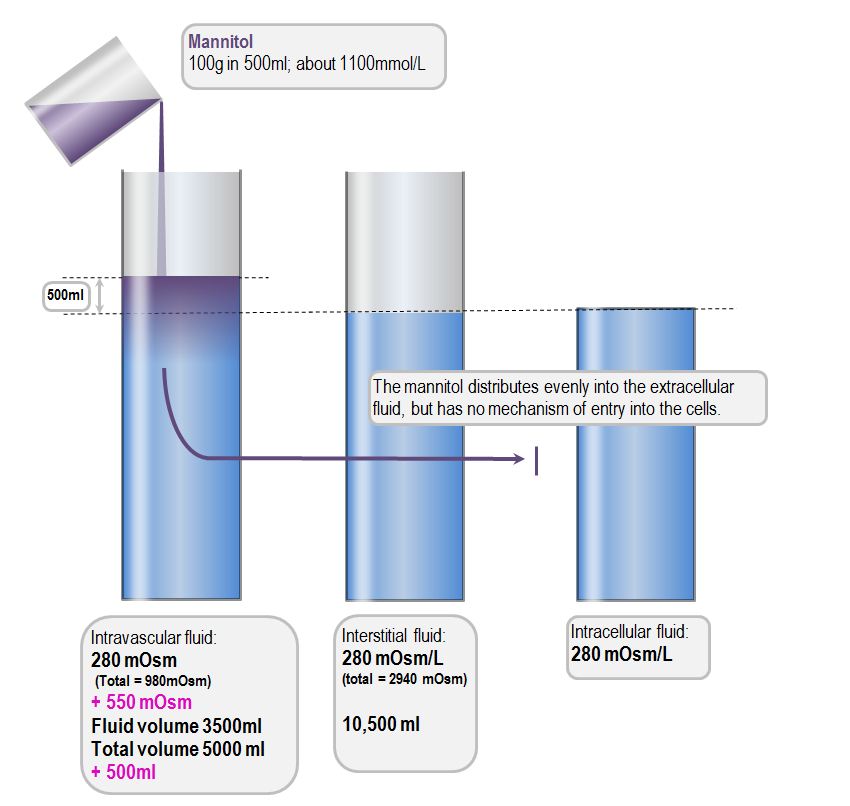 When you are racing two molecules against each other, you must remember Ficks Law of Diffusion. Within the same racetrack, the smaller molecule always wins. And so it is with mannitol and water. Briefly, after it is administered, the mannitol is exclusively intravascular, and the hyperosmolarity of plasma sucks water out of the extracellular space. Water is a smaller molecule, and therefore diffuses faster into the bloodstream - faster, anyway, than mannitol is able to diffuse out of it. This effect is very shortlived, as both molecules readily equilibrate between the intravascular and extravascular spaces of the extracellular compartment. This sort of rapid volume expansion would probably be seen more frequently with a rapid bolus of mannitol.

It would be unusual to receive the whole half-liter within 2 minutes, but it is not a completely ridiculous notion given large lines and strong hands doing the pumping.

Most authors assume this has been seen by their readers. Instead of demonstrating such an effect in vivo, they merely suggest that pulmonary oedema may occur in patients who are already fluid-overloaded, or who have poor quality myocardia.

Let us envision a scenario where the mannitol is administered rapidly, as a bolus over a few minutes.

The distribution of mannitol within the extravascular space is reasonably rapid, and within a few minutes the serum and extracellular fluid concentration of mannitol has equilibrated. This extra litre is distributed mainly into the interstitial fluid.

Blood volume increases by about 7%, which does not attract very much interest from the baroreceptors.

The increased tonicity triggers an osmoreceptor- driven release of vasopressin, which under normal conditions would increase the resorption of free water from the cortical collecting duct. Of course, with the mannitol in the tubule, much less resorption takes place than would be normally expected. Overall mannitol is still a diuretic, though it should by all rights induce a mighty vasopressin-driven water conservation response.

The dehydration of the intracellular compartment predictably has an effect on the circulating component of that compartment - the blood cells. The removal of water from an erythocyte actually has some benefit for the behaviour of that erythrocyte; its size decreases and it becomes more squishy and deformable. This has implications for its ability to squeeze though small vessels. In particular, the improvement in erythrocyte deformability leads to decreased blood viscosity, particularly at high shear rates where deformability determines viscosity. Thus, the rheological effects of mannitol should improve microvascular perfusion.

So, of this missing 0.9 L of intracellular water, how much is driven out of the swollen brain?

A CT study which measured cerebral water content by Houndsfield units had found that the change in electron density had vaguely corresponded to the expected cerebral parenchymal water loss. So there is radiological evidence.

But of course in the ICU we prefer more direct evidence, ideally collected in a maximally invasive fashion.

The early pioneers did just that. in 1974, Leech and Miller from Glasgow captured 10 baboons and subjected them to extradural balloon compression. The animals were then injected with mannitol, with or without hyperventilation.

The poor baboons show us that the response to mannitol is rather rapid, taking maximal effect by about 5-15 minutes. Furthermore, the maximal effect fade rapidly, and the ICP returns to a new (slightly lower) plateau, which persists for maybe 2-3 hours.

The duration of this effect was better investigated by a 2005 randomised controlled trial which compared mannitol and a hypertonic saline/dextran cocktail. On average, mannitol kept the ICP below their threshold for about 90 minutes, whereas the effect of hypertonic saline lasted longer - about 130 minutes.

An excellent NEJM article, peeking at us from behind a paywall, recalls for us the year 1961 - a time during which clinical interest in mannitol was "limited and sporadic". However interesting it sounds, I was unwilling to pay the editors their pittance. Pubmed took pity on my poverty and returned a very similar, if less seminal, article about the effects of mannitol on blood volume. It involved seven healthy young males, who (the authors are keen to report) were "trained to void on command".

These seven healthy males had their blood volume estimated from their haematocrit. The increase in extracellular volume following mannitol infusion was not profound. The males enjoyed an increase ranging from 420 to 1400ml (on top of the 500ml contributed by mannitol alone).

According to the disgracefully crude Gamblegram above, the extracellular fluid in total gains about 1422ml of fluid.

Let us assume that neither new electrolytes are added to the body via other infusions, nor is there any migration of ions from the intracellular compartment.

Following this calculation, if the sodium was previously 149mmol/L and the extracellular fluid suddenly gained and extra 1422ml of water, the new sodium concentration is 127mmol/L. This is quite a drop.

Indeed, one might expect all the other electrolytes to behave in a similar fashion (i.e. to decrease in concentration by about 9%).

Does this in fact take place in vivo?

It would seem so. In fact, among the seven healthy males in the abovementioned experiment the serum sodium dropped to about 130 (from about 145), which means that crude volume and concentration calculations can predict its behaviour with some degree of accuracy. But it turns out, only sodium behaves in a predictable fashion. And it is really only ever seen in patients with renal failure, who have no hope of excreting the mannitol - in these people, the extracellular fluid volume expands for a prolonged period of time, making them the subjects of case studies in hyperosmolar hyponatremia.

However strangely, the serum potassium increases.

Hyperkalemia in response to mannitol infusion

Potassium increases, instead of being diluted. There are two mechanisms in play here.

Firstly, the water moving out of cells creates an "osmotic drag" similar to the effects of ultrafiltration in dialysis. Solutes are removed along with the litre or so of intracellular water, and potassium is the main solute involved in this (being the most numerous intracellular cation). This is a purely osmotic effect- it doesn't matter which agent is used, and it is also observed in infusion of hypertonic saline.

This hyperkalemia can become a problem. In vivo case studies of craniotomy patients reveal the magnitude of this effect can be profound - Subject 2 in this Japanese case series suffered a rise from a serum potassium of 4.1 mmol/L all the way up to 6.1mmol/L.

Diuresis due to mannitol infusion

As it makes its way through the nephron, mannitol encounters few obstacles. Being a tiny monosaccharide molecule, it negotiates the glomerulus effortlessly, and finds itself completely ignored by the tubule. There, it is neither absorbed nor secreted. However, its presence in the lumen upsets the concentration gradients for water reabsorption, and "osmotic diuresis" results.

As a result, water and electrolyte loss occurs, and the magnitude of this is difficult to predict. Early experiments have revealed that a loss of sodium and potassium occurs; in general it seems more water is lost than sodium.

The scale of these electrolyte changes has prompted some authors to advise that frusemide be used instead of mannitol to control ICP in cardio-fragile patients. This inequality of losses results in a concentration of total body fluid. In essence, this is a way to pee out your intracellular fluid volume.

Hypernatremia and volume depletion due to mannitol infusion

In these enlightened times we are conscious of his complication, and never subject patients to ridiculous doses of mannitol. Back in the olden days, of course, things were a-different. I am able to link to an amusing NEJM case report from 1965, where a man with "recalcitrant ascites" was dehydrated by 18 liters, with a severe hypernatremia ensuing as the result.

The presence of hyperosmolar solute in the renal tubule can cause a acute tubular necrosis, in a fashion similar to the effects of hyperosmolar radiological contrast. This "osmotic nephrosis" can usually be avoided if one remains within a reasonable dose range, without trespassing into the absurd.

UpToDate recommends we keep our total dose of mannitol below 1100g in renally competent patients.

A less insane guideline recommends to administer no more than 0.25g/kg, no more frequently than every 4 hours.

Baxter helpfully provide a fact sheet for their Osmitrol brand of mannitol solution.

Shenkin, Henry A., et al. "The use of mannitol for the reduction of intracranial pressure in intracranial surgery." Survey of Anesthesiology 8.5 (1964): 405-406.

Aviram, A., et al. "Hyperosmolality with hyponatremia, caused by inappropriate administration of mannitol." The American journal of medicine 42.4 (1967): 648-650.