The catechol ring is a mere 6-carbon phenyl ring.  3,4-dihydroxybenzene, to be nerdishly precise. What makes it catechol  is the presence of the exciting hydroxyl groups at the 3 and 4 position.

Yes, there is an actual chemical called catechol, and according to Wikipedia about 20 million tons of it are produced annually, as a precursor to pesticides flavours and fragrances. Its rapidly soluble in water. The factories manufacture it by reacting phenol with hydrogen peroxide. Phenol is essentially the same benzene ring but with only one hydroxyl group; it originates from benzene when benzene reacts with nitrous oxide. Catechol is called catechol because it was first derived from the juice of Mimosa catechu. In case you needed to know.

β- Phenylethylamine, who begot all sympathomimetics

Mighty phenylethylamine is the grandfather of all these sympathomimetic drugs, ranging from inotropes to antidepressants bronchodilators and party pills. This basic backbone is what its all about. The absence of hydroxyl groups permits phenylethylamine to penetrate the blood brain barrier. 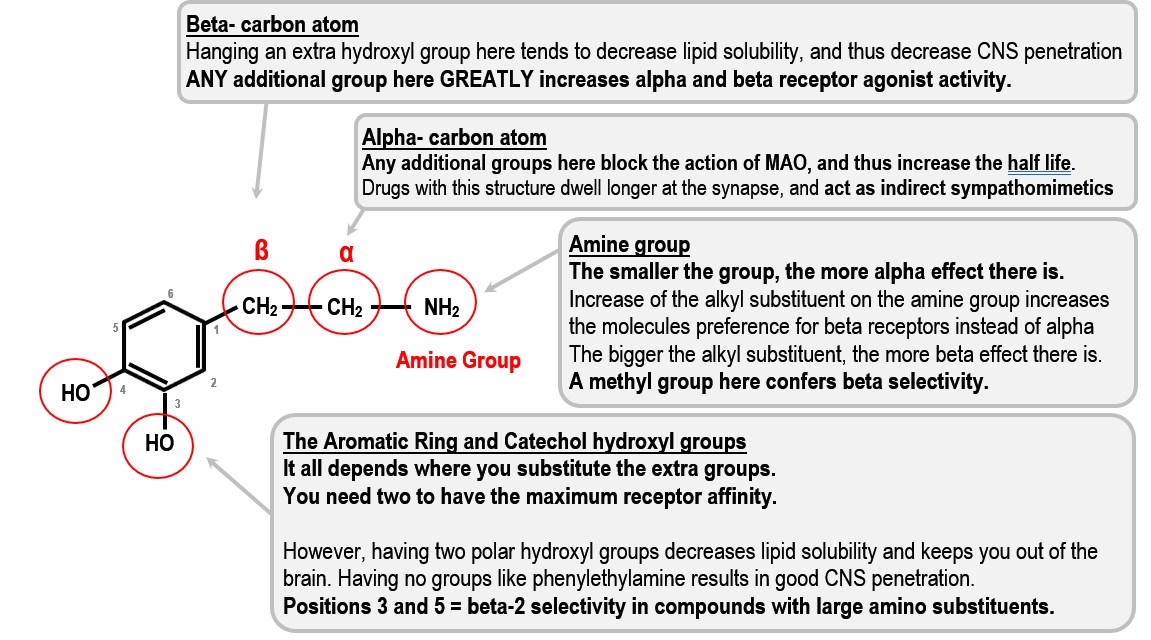 Any additional groups here block the action of MAO, and thus increase the half life.
Drugs with this structure dwell longer at the synapse, and act as indirect sympathomimetics

The smaller this tail group, the more alpha effect there is.  For example, noradrenaline has nothing here, and is a potent alpha-selective agonist. Add a short methyl group, and you get adrenaline, which has a potent nonselective beta effect. Make it longer, and you get something like salbutamol. In short, increasing the alkyl substituent on the amine group increases the molecules preference for beta receptors instead of alpha, and the bigger the alkyl substituent, the more beta effect there is.

The Aromatic Ring and Catechol hydroxyl groups
It all depends where you substitute the extra groups.
You need two to have the maximum receptor affinity.

However, having two polar hydroxyl groups decreases lipid solubility and keeps you out of the brain. Having no groups like phenylethylamine results in good CNS penetration.
Positions 3 and 5 confer a beta-2 selectivity in compounds with large amino substituents.