Urinary pH and urinary anion gap are the two tests which are required to investigate the renal acidification process; the urinary anion gap being a proxy for urinary ammonium (which is rather difficult to measure). This test can help discriminate between the gastrointestinal and renal causes or normal anion gap metabolic acidosis. 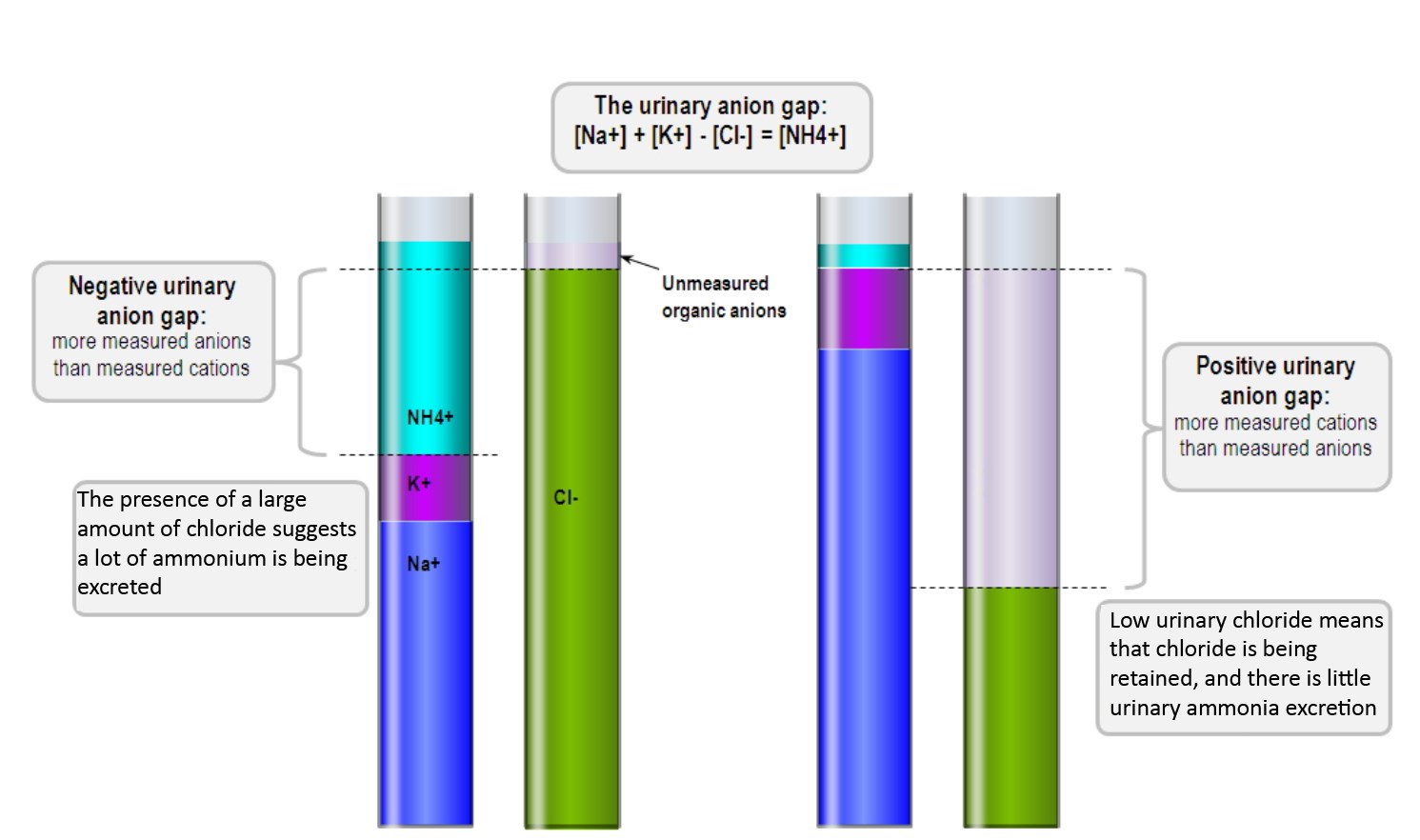 Under normal circumstances, in the presence of a metablic acidosis, the urinary anion gap will be negative; that is to say, there will be a massive increase in the urinary excretion of ammonium and chloride. This is a totally normal response to a metabolic acidosis.

Conversely, in the presence of a distal renal tubular acidification defect, the urinary anion gap would be positive, reflecting the impotence of the diseased distal tubule, its utter uselessness in the role of an acid-base regulator. The urinary ammonium remains low and the amount of chloride excreted is inadequate, giving rise to the impression that the kidneys aren’t doing their job.

The usefulness of the urinary anion gap is in distinguishing whether or not a patient has a renal or a gastric cause of hyperchloraemic acidosis. The pH of the urine may actually be reasonable neutral in an acidosis like this. The renal ammonia excretion may actually be sensibly high, but the overall volume of renally cleared chloride may be inadequate, as it may be hampered by decreased glomerular filtration (due to dehydration).

Thus, looking at the urine pH, one may think that this acidotic patient has a renal tubular cause for their acidosis. But by calculating the urinary anion gap, one may discover that the urinary ammonia is high, and thus the urinary chloride excretion is appropriate; which would mean that non-renal causes of acidosis are to blame.

Why the urinary anion gap is occasionally wrong

It is possible to fool oneself with the urniary anion gap.

In general our use of it is the result of there being a generalised unwillingness among laboratory staff to perfrom a direct urinary NH4+ level. Why, you might ask? Who knows. Perhaps it is an expensive test to run. Either way, we end up having to calculate the urinary anion gap to assess the amount of "unknown" cations, and then assume that the NH4+ is responsible for all of that gap.

What if along with chloride, an excess of anions is being excreted which are not measured? These could be hippurate in toluene poisoning, or ketones in ketoacidosis, etc etc...

How does one get around this source of inaccuracy?

If one suspects that one is being misled by the urinary anion gap, one can measure the osmolality of the urine, and calculate the urinary osmolar gap. It does not rely on the measurability of anions.

The laboratory may be good enough to measure urinary glucose and urea for you. If the laboratory happens to be useless, one may estimate the glucose (generally, it is zero- unless the BSL is above 10 mmol/L). The urea, however, needs to be measured.

So, how does this help?

The entire process of calculating all these gaps is all for one purpose- to estimate a urinary ammonium (NH4+) level, without having to actually measure it (because apparently there is no convenient way of routinely doing so).

Thus, the osmolar gap can only consist of ammonium and some matching anion (all others being accounted for by the measured urinary electrolytes). In fact, one might say the urinary osmolar gap is exactly twice the urinary ammonium concentration.

The urinary osmolal gap should be around 80-100 (Halperin et al, 1988). It is almost inevitably raised in high anion gap metabolic acidosis (the extra excreted anions increase the gap). In RTA, the osmolal gap is usually under 40.

Impaired urine acidification in chronic renal failure and in distal (Type 2) RTA is associated with an increase in urine anion gap and a decrease in urine osmolal gap  (this has been emiprically demonstrated by Kim et al, 1996). These patients tend to excrete less ammonia than is expected.