Describe the effects of a tachycardia on myocardial oxygen supply and demand in a normal heart.

The main points expected were the determinants of myocardial oxygen supply. These include
arterial oxygen content and coronary blood flow. Coronary blood flow depends on coronary
perfusion pressure and coronary vascular resistance and that most left coronary blood flow
occurs in diastole. Tachycardia reduces diastolic time and hence left coronary blood flow. In
comparison blood flow in the right coronary artery is continuous both in systole and diastole
and is little affected by heart rate. A correctly labelled diagram of left and right coronary
blood flow attracted extra marks. Unfortunately most diagrams were inaccurate, not labelled
and had no units on the axes. Systolic compression particularly reduces blood supply to the
left ventricular subendocardium which is most susceptible to ischaemia. Extra marks were
given for describing metabolic autoregulation, the high oxygen extraction, explaining that
oxygen supply cannot be increased by increasing oxygen extraction in the coronary
circulation and describing the driving pressure differences in both coronary arteries in
systole and diastole.

A description of the determinants of myocardial oxygen demand was also required (e.g. left
ventricular, preload, contractility, afterload and tachycardia This part of the question was
particularly poorly answered.

A helpful way of creating headings for this answer would have been to separate the question into supply and demand, list the factors determining each, and then briefly mentioning how they are affected by tachycardia. What follows was devised as an exhaustive list, for trainees to check their own written answers agains. It is not a "model answer", as nobody could be expected to reproduce all of the points over the time allotted to each SAQ in the written paper. This also demonstrates the limitations of the question: one cannot simply ask "explain human cardiac physiology in ten minutes" and then complain that it was "poorly answered".

The "correctly labelled diagram of left and right coronary blood flow" would have probably expected something like this, reproduced from the  6th edition of Barash's Clinical Anesthesia. An alternative to this official image is also offered. 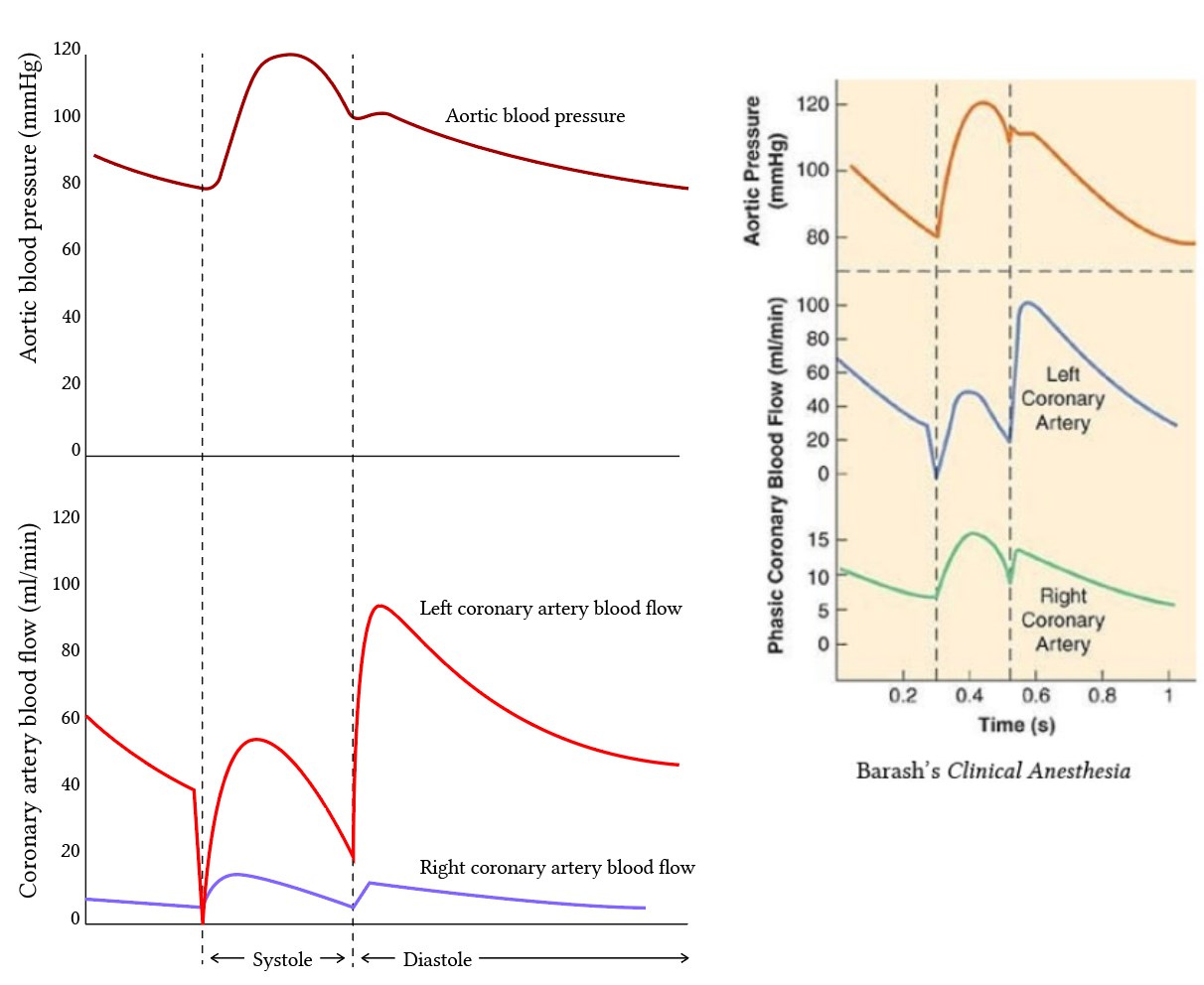 An important feature to point out is that the upper half (where the aortic waveform is) represents pressure over time, whereas the lower half represents flow. That could be a costly labelling mistake.  Also, the x-axis on the non-canonical diagram is labelled with events of the cardiac cycle rather than with seconds, and there is solid rationale for this. No matter which time intervals you decide to memorise, they will likely be inaccurate (as the values depend considerably on the heart rate and which textbook the examiners have been reading) and pointless (because the exact numbers don't really reveal any additonal understanding of the physiological concepts, whereas the events of cardiac cycle do). Thus, the time scale values should probably be omitted from the trainee's exam diagrams, as it would be inadviseable to reproduce something in the exam which you know is both inaccurate and pointless.