Outline the abnormalities in pulmonary function testing of a person with severe obstructive lung disease (40% marks). Describe the physiological changes that explain these abnormalities (60% marks).

The majority of candidates were able to state that obstructive lung disease resulted in a reduction
in the FEV1 and the FVC. Very few gave any indication of how much these parameters might be
reduced in severe obstructive lung disease or that FVC is usually only slightly reduced, whereas
the FEV1 is markedly reduced and therefore so is the FEV1/FVC ratio. Candidates were also
expected to indicate that peak expiratory flow rate is also reduced (by 50% or more in severe
disease), that carbon monoxide diffusing capacity is also reduced, and residual volume and total
lung capacity are increased. A reasonable proportion of candidates commented that the forced
expiratory flow (FEF) 25-50% being reduced and this results in a ‘scalloped’ flow volume loop.
Accurately reproducing a normal flow volume loop and a flow volume loop of a patient with
severe obstructive lung disease on the same graph could have depicted most of the above points
and scored the majority of marks available.
The second part of this question was poorly answered. Whilst the majority correctly stated that an
increase in airways resistance was present, few stated what changes gave rise to this. Dynamic
airway compression, was mentioned by many, but why this occurred was explained poorly. The
effect of closing capacity rising above the FRC was seldom mentioned and why the FRC
increased again was seldom mentioned or explained. A detailed knowledge of what is a core
subject in intensive care medicine was expected.

This is one of those things where one's answer would probably benefit from being in a table, with a column for "abnormalities alongside a column for "physiological changes which explain them".

The college also alluded to a picture which might be worth one thousand marks. In fact the examiners were weirdly specific in spelling out this request. They wanted "a normal flow volume loop and a flow volume loop of a patient with severe obstructive lung disease on the same graph", depicting the spirometry changes of COPD. Such a graph would probably look something like this: 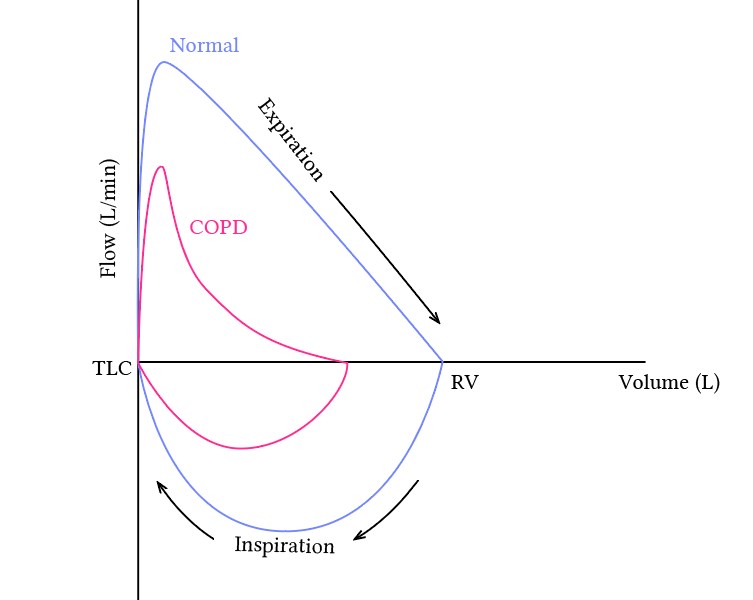