Classify anti-emetic agents by describing their mechanism of action and provide examples.

It feels important to convey an understanding to the readers that "GABA" is the  agreed-upon conventional abbreviation of γ-aminobutyric acid, whereas "GABBA" is an iconic cricket stadium in Brisbane. Beyond spelling weirdness ("scopalamine"?), this table is outrageously inaccurate. For example, granisetron is definitely not a "++++" histamine receptor blocker. Moreover it is not clear what exactly "+" means here; does it reflect receptor affinity, or an agonist effect? It can't possibly be agonist effect, because "scopolamine" is definitely not a "++++" muscarinic agonist, except then what do we make of the "-" signs?

Here is a better, slightly more scientific table from Tomassino (2012), in case anybody still insists on using this system. It is sufficiently similar to all other such tables, in the sense that they are all different, and none of the source material for their data is referenced. At least this one explains what "-" means. 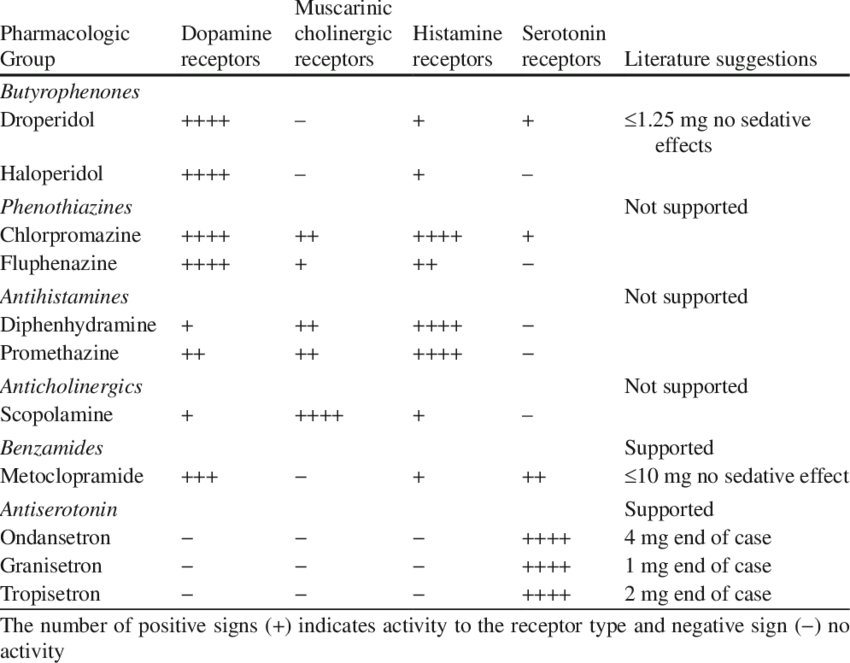 An alternative classification could instead concentrate on the specific receptor effects, for example:

Lyons, Samantha, and Ben Ballisat. "Antiemetic drugs: pharmacology and an
overview of their clinical use" Update in Anaesthesia 31 (2016).

Sanger, Gareth J., and Paul LR Andrews. "A history of drug discovery for treatment of nausea and vomiting and the implications for future research." Frontiers in pharmacology 9 (2018): 913.