History of the glass electrode

The history of the glass electrode enjoys a thorough and well-developed exploration in a 2011 article by Fritz Scholz, from which much of this information is derived. Generally speaking, the explanation of a concept like this probably benefits from an exploration of its origin, so that the trains of thought can be followed from early observations all the way to the modern era (so that one can understand how the current state of the art ABG analytic technology performs its basic functions). This photo is probably from 1925; it was provided to Fritz Sholtz by Cremer's grandson, and is reproduced here as a respectful tribute to Cremer and his work.

Max Cremer, in his 1906 paper, was the first to report that an electrical potential which develops across a glass membrane is proportional to the pH difference across that membrane.

Within the context of this already massive digression (the initial intention was to write a brief summary of the ABG analyser), one would be forgiven another nested digression into electrochemical territory. I console myself with the delusion that a discussion of the Giese-Helmholtz cell is somehow a prerequisite for the understanding of the basic principles underlying glass electrode function.

H.L.F. von Helmholtz and his gifted assistant Wilhelm Giese had discovered, to everybody's surprise, that glass can act as a conductor (or rather, as an electrolyte - similar to an aqueous solution of salt.). This was unearthed in the course of Giese's work on the residual charge of Leyden jars (1880). Giese had discovered that in an evacuated glass cell, some current still flowed between electrolytes which were supposed to be sealed off from one another by a layer of glass. This current was related to the concentration of the electrolytes as well as to the thickness of the glass. In his 1881 Faraday lecture von Helmholtz had discussed this concept, and proposed that this phenomenon would not be observed "if the septum of glass did not behave like an electrolyte".

Above: The Giese-Helmholtz Cell (using a diagram from the original 1906 Cremer paper)

Of this, Max Cremer wrote:

"The idea that the glass as a diaphragm between the two liquids may possibly lead to a rather considerable electromotive force, obviously did not occur at that occasion to Helmholtz, and in any case no experiments have been arranged to test such possibility."

Obviously, it must have seemed important to place emphasis on the fact that his (Cremer's) was the priority claim in the development of this technique. He explains:

"I recalled the bulbs which the glassblowers used to fabricate when they join glass tubes;
therefore I decided to perform experiments with such glass bulbs. Only later I carefully searched the literature in how far glass membranes have been used earlier for similar purposes."

Cremer's experiment differed from the classical Giese-Helmholtz cell in the contents of the glass chambers. One was acidic and another was an alkaline solution. The resulting potential difference was documented by him, and he observed that there was a change in the potential difference associated with changes in the acidity and alkalinity of the contents. However, though he is widely credited with the discovery of the glass electrode, it appears he did not envision that his experimental apparatus would ever become an instrument of measurement.

The glass electrode for the measurement of pH

F.Haber and Z. Klemensievics made the next steps in the development of this concept in 1909. Their contribution is celebrated in a 2010 article by Barbara Marczewska and Krzysztof Marczewski, to commemorate the 100th anniversary of the glass electrode. According to the Marczewskis, Zygmunt Klemensievics was an intern in 1909 and would go on to publish nothing else of great importance (but he did get to meet Marie Curie). Fritz Haber, on the other hand, was already a celebrated scientist in 1909 and would go on to receive the Nobel Prize in chemistry (1918) for his work on the synthesis of ammonia. His work on chemical weapons is less remembered but no less memorable.

The experimental setup used by Haber and Klemensievics, as it appears in the diagram below, was retrieved not from their original publication (which was not available to me) but from a 2009 article by Peter Kurzweil. The major contribution of these authors was to generate a series of measurements, relating changes in the titrated pH to changes in potential difference measured across the glass membrane.

The glass electrode for the measurement of blood pH

This next step was taken by Phyllis Margaret Tookey Kerridge, who in 1925 developed the first glass electrode for analysis of blood samples. An extensive discussion of the practical problems in building the apparatus was presented. Among her concerns, Kerridge lists the high resistance of glass (50-150 megaOhms) with the resulting tendency of the device to short-circuit in the presence of dirt and humidity. There was likely a series of ...shall we say, current-associated problems. "The high tension battery used for charging the electrometer needle was supported on paraffin wax blocks, and was on a wooden table separated by an air gap from the table carrying the electrodes". Everything was embedded in paraffin, soaked in paraffin or somehow otherwise encrusted with it. Adding to the steampunk quality the electrometer was operated by an "ebonite switch with brass conductors and ivory handles". In spite of these precautions, on humid days the amount of current leakage was "considerable".

Kerridge also lamented the frailty of the thin-walled glass bulb; "in stirring the solution in the beaker, or in washing and drying the bulb, great danger of breakage is incurred" she complained. Indeed, the membrane had to be pretty thin (about 0.1mm). One can imagine a lab strewn with the fragments of numerous smashed bulbs, crunching under the feet of her assistants. She proposed an alternative method of construction, a bulb-within-a-bulb which she claimed was "very easily glass-blown after a little practice". One is reminded of this being the heroic age of science when you ended up having to make your own equipment. The apparatus, as sketched by Kerridge, is reproduced below from her original paper.

Kerridge used a hydrogen electrode to produce a reference buffer solution to calibrate this glass electrode, which is a similar step to the routine self-calibration of modern ABG machines. The subsequent experiment she performed involved 450 measurements of pH, performed with various substances, of which human blood was one (with a measured pH of 7.42). Other substances she tested for some reason included a turbid watery mixture of flour (pH 6.15) and an aqueous extract of bean seedlings (5.87).

Kerridge's paper briefly discussed the properties of different types of glass. In contrast to Haber and Klemensievics (who used only Thuringian glass, particularly suited for blowing) Kerridge used common "soft soda laboratory glass". She found that there were no results whatsoever with pure silica, at any thickness.

If some glasses were so insensitive, then surely others would be more sensitive, and therefore some ideal composition might be arrived upon through experimentation. Thus, in 1929 MacInnes & Dole experimented with different types of glass to find the one which was most sensitive. The ideal mixture was found to be 72% silicon dioxide, 6% calcium oxide and 22% disodium oxide. The abovementioned 2009 Kurzweil article references a 1991 textbook, suggesting that subsequently, manufacturers had settled on a mixture 63% SiO2, 28% Li2O, 5% BaO, and 2% La2O3. Also, apparently the addition of trace amounts of uranium and titanium improves the performance of the membranes in alkaline solutions.

In any case, though the technology has enjoyed eight decades of market-driven refinement, the basic principles remain the same. However, in the dim past, everybody thought the electrode worked because Brønsted protons migrated through the glass as if it were a semipermeable proton-selective membrane. Today, the much weirder reality has been revealed to us.

It is no wonder that Kerridge was unable to use pure silica glass for her electrode. It is now known that the ionic impurities (and particularly the sodium content) in the glass play a major role in its utility as an "electrolyte"; specifically, it is no accident that MacInnes and Dole found that the ideal glass composition for the electrode membrane was composed of almost one quarter disodium oxide.

This diagram represents the microscopic events at the glass electrode membrane. 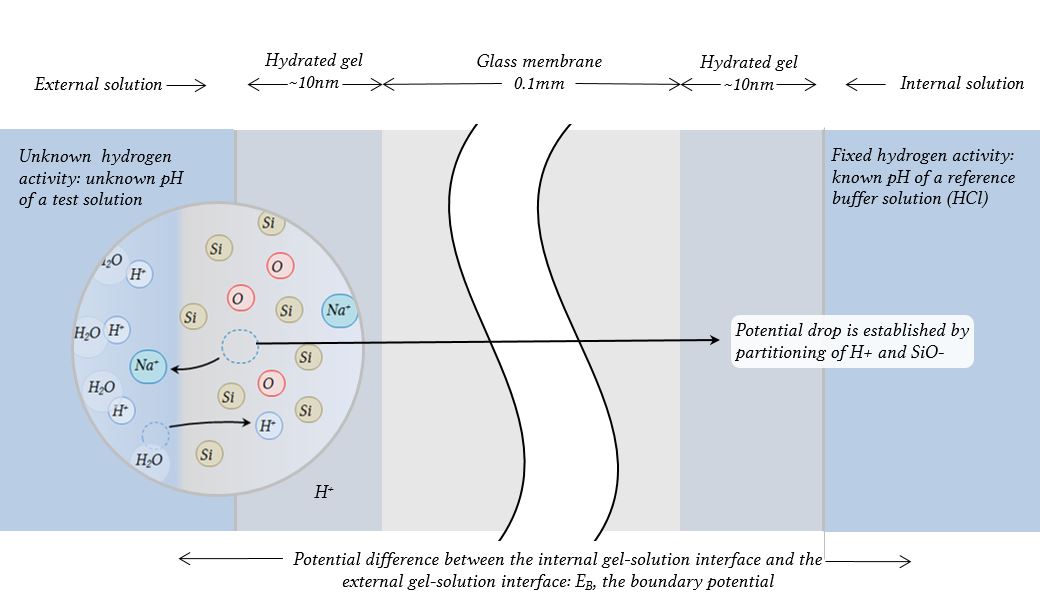 The glass membrane itself does not conduct any hydrogen ions, per se. Instead, a "hydrated gel" forms at the interface between the aqueous solution and the glass. This layer is incredibly thin (~ 10nm) and is composed of water-saturated glass. It may be weird to think of glass as an absorbent material, but in fact, this absorptive property is critical - if a glass electrode is allowed to dehydrate, it will cease to function as a pH measurement device. Sharma's Instrumental Methods of Chemical Analysis reports that the formation of this hydrated gel layer involves the absorption of about 50mg of H2O per 1 cm3 of glass.

Thus, glass is far from solid; but rather, it is an amorphous silicate sponge, composed of anionic fixed sites and cationic vacancies. And so, as a solution of increased H+ activity encounters this hydrated sponge, a cation exchange occurs. Experimentally, it appears that on average about 2.9 - 0.97 × 10-8 mol of the cation is exchanged in a commercially available electrode (Metrohm) within a pH range of -1.0 to 1.0. This cation exchange can be represented as an equilibrium equation:

(where the H+(glass) is a Brønsted acid)

Obviously, each side of the gel has a separate equation to describe its equilibrium. In a case where the pH is different for each solution, the equilibrium would favour a different H+/Na+ balance; thus there would be a difference in positive charge between the two hydrated gel layers.

This results in a flow of positive charge through the dry glass. The exchange of sodium ions at the interface is the first stage of the conditioning ("watering") of the electrode.  Though bold arrows in the diagram might lead you to believe that a sodium atom will bravely charge across the massive 0.1mm membrane, in fact, each individual atom probably only moves a few atomic diameters at the hydrated interface. After that initial conditioning, the potential drop across the glass/solution interface is established only by partitioning of the protons and the SiO- groups. Sodium ion exchange across the glass does not occur.

This, of course, is a childishly brief overview. If one is for some reason possessed by an insatiable lust for electrochemical potentiometry, one may satisfy it with the help of Nallanna Lakshminarayanaiah's 2012 opus, Membrane Electrodes. Alternatively, the 2011 paper of Fritz Scholz makes reference to Bobacka et al (2008) as a review of the complex problem of potential formation at membrane electrodes.

Scholz, Fritz. "From the Leiden jar to the discovery of the glass electrode by Max Cremer." Journal of Solid State Electrochemistry 15.1 (2011): 5-14. - To Fritz Scholz, I am grateful for translating sections of Cremer's articles, and in general for an excellent overview of the history of the glass electrode, and for contacting me and settings straight some of the misunderstood sections of this page- not the least of which was the correct spelling of his name! As a Yartsev (Yartzev, Yartsov, Yartav, etc), I totally understand.

Abe, Yoshihiro, and Masunobu Maeda. "Origin of pH‐Glass Electrode Potentials and Development of pNa‐Responsive Glasses." Journal of The Electrochemical Society 147.2 (2000): 787-791.

Belyustin, Anatolii A. "The centenary of glass electrode: from Max Cremer to FGK Baucke." Journal of Solid State Electrochemistry 15.1 (2011): 47-65.