This chapter is relevant to Section I1(ii) of the 2017 CICM Primary Syllabus, which expects the exam candidates to "define osmosis, colloid osmotic pressure and reflection coefficients and explain the factors that determine them". Some of those properties are colligative properties of a solution, i.e. those properties which depend upon the number of molecules in it, rather than on what sort of molecules they are. It’s all determined by the ratio of number of solute particles to the number of solvent particles.  Introducing solutes into your solvent changes the colligative properties. Doesn’t matter what solute- these properties don’t discriminate. The number of particles is the most important issue.

Conventionally, the colligative properties are listed as:

Osmotic pressure, interestingly, is not a colligative property of a liquid, as it can also be applicable to a gas or a supercritical fluid. But it is usually discussed alongside "proper" colligative properties because it shares with them a certain linear dependence on the concentration of particles, and tends to be taught together with them.

Vapour pressure, boiling point and freezing point (as well as of their respiratory-related matters such as humidity) are "proper" colligative properties of liquids because they are applicable only to liquids, and they are discussed in a separate chapter on the physics of humidity and evaporation. Multiple CICM Part One exam papers ask for details of those properties, partly because humidity is relevant for the understanding of mechanical ventilation, and partly because much of this exam was clearly plagiarised from the ANZCA primary, which is understandably obsessed with vapours.

There does not seem to be any single published article that confronts these definitions in simple language without trying to bludgeon the reader with calculus (Staverman, 1951, or Kramer & Myers 2012 are great example of this). Textbook chapters are better, but fall into the trap of trying to explain the concepts using examples or clinically relevant material instead of short pithy definitions (seriously people, we just want to memorise a fact to pass an exam here).  The osmosis chapter from Feher is probably the best example of a good explanation with the optional side of hardcore maths.

And, if one were prepared for a truly transformative journey into the heart of osmosis and osmotic pressure, one may commend themselves to the epic two hundred page dissertation defended by David Guell at MIT in 1991.

The term "osmosis", from Greek ὠσμός ("a push"), has a different definition depending on which textbook you choose to use as your definitive official exam resource. Considering that CICM prefer Ganong and Guyton & Hall, it seems logical to borrow the definitions from those:

There is at least a million others. From a brief Google search it appears that every adult human has at one stage or another scribbled their own slightly different definition of osmosis on some surface somewhere. To borrow the excellent opening words from a 1927 textbook of botany, "the word osmosis has been given such a variety of meanings by those who have used it that is thas lost any precise meaning whatever".  The reader is therefore invited to create their own, and it will be as valid as the next. In case one needs a plausible-sounding third option, here is the definition from Ferner in Quantitative Human Physiology (2nd ed. 2017):

"Osmosis refers to the movement of fluid across a membrane in response to different concentrations of solutes on the two sides of the membrane. "

The key points here are that, unlike diffusion considered more broadly, osmosis narrowly refers to  the movement of the solvent itself, rather than particles or molecules of the solute. Most of the definitions also seem to incorporate a semipermeable membrane of one sort or another, and so it seems essential; various unofficial sources claim that without a semipermeable membrane in the way it's not osmosis, it's just diffusion.

Osmotic pressure is defined as:

That one is from the IUPAC Gold Book, and therefore definitive (as those people are literally responsible for defining the terms used in chemistry and chemical engineering).

Or something probably with more Druckkraft in it. Anway, the point is that osmotic pressure is literally a hydraulic term. Specifically, the definition is a fluid pressure, which can be expressed in normal pressure units (be it kPa or mmHg), and which describes the pressure necessary to oppose the movement of solvent.

Observe, a simple experiment where, to two chambers filled with some solvent and separated by a semipermeable membrane, some sort of solute gloop is added. 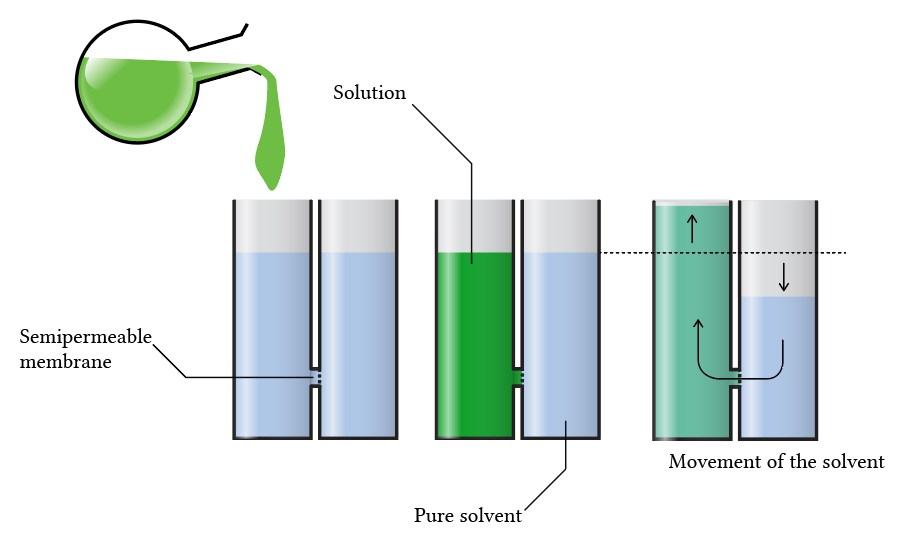 The gloop disperses into one chamber only, the membrane being gloop-impermeable. Owing to this, solvent moves into the gloop chamber, and the fluid level rises. So far, so osmosis.

Now, for the most important part: the osmotic pressure is the pressure that would need to be applied to the gloop chamber in order to keep this fluid movement from happening: 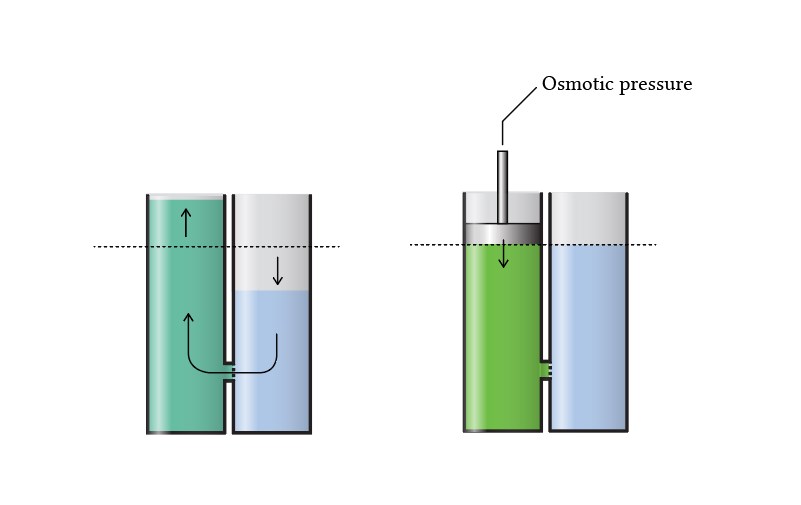 How much pressure would that be, one might ask?

This view of osmotic pressure originates with Jacobus Henricus van 't Hoff. In popular textbooks and other resources, the van 't Hoff model is used to imagine that a substance dissolved in a fluid medium behaves as if it were a gas in a vacuum. In short, the salt in the beaker of water is said to exert the same pressure on the walls of the beaker as it would if the water was magically removed, leaving the salt in a weird gaseous form. Obviously this oversimplification is not correct, as it would only apply to inert gas mixtures where particles do not interact, whereas in a solution the solute and the solvent are constantly exchanging energy, so the resemblance between the ideal gas equation and the osmotic pressure equation is purely superficial. Still, there must have been something attractive about being able to explain osmotic pressure as a partial pressure of the solute, so it keeps coming up in textbooks even though this "solvent tension theory" was discredited in the 1970s. For a deliciously mathematical takedown of this concept, the interested reader is redirected to Kramer & Myers (2012).

The official form of the osmotic pressure equation from the IUPAC Green Book (3rd ed., p. 59) is:

Other variations exist. For example, if you assume the solution is behaving ideally, you can simplify this even more, as:

where MB is the average molar mass of the solutes, and

ρB  is the mass concentration of the solutes

where CB is the amount of the solute

At this stage it would be possible to launch into pages of derivations, but it would not be useful, as it would not add very much to the otherwise rather basic points this chapter is trying to make. The bottom line is that there is a considerable amount of pressure being applied to fluids because of osmotic gradients. Using Π = n × (c/M) × RT and plugging in some plausible numbers for human plasma, Kerry Brandis has calculated that the osmotic pressure exerted by all of its dispersed contents is 5409 mmHg, or 7.1 atmospheres. An osmotic gradient of even 10 mOsm/kg could give rise to a pressure difference of 190 mmHg.  The same value can be seen in other reputable resources.

Also, speculating a little about this concept: if pressure can oppose the movement of the solvent into an area of higher solute concentration, then, surely, with enough pressure... 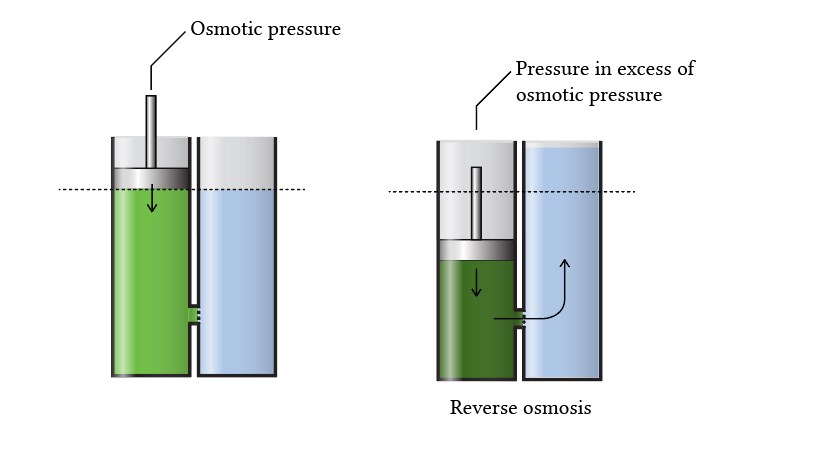 Yes, the application of hydraulic pressure to the solution can be used to force solvent through the semipermeable membrane. The pressures used in commercially available personal reverse osmosis water purifiers is usually about 2.5 atm (i.e. 250 kPa). The concentrated effluent is discarded. This is usually how SLED dialysis units are operated, as it would not be possible to supply enough premixed dialysate fluid with the sort of flow rate they require. For the person who enjoys official definitions, IUPAC defines reverse osmosis as: