This chapter is relevant to Section I3(ii) of the 2017 CICM Primary Syllabus, which expects the exam candidates to "describe the measurement of body fluid compartments". It is another one of these massive and fascinating topics which have never attracted any attention in the CICM exams, and which can therefore be abandoned completely by the revising exam candidate. In case they are for whatever reason attached to completeness, they may wish to limit their revision to the contents of this summary box.

As always with these fundamental concepts in physiology, the only place you ever find detailed explanations are the chapters of textbooks, and they don't always feel the need to expand on anything with detailed references.  There are few peer-reviewed articles to cover this material broadly as an overview; all you end up finding are very specialised and specific articles describing an individual technique. Non-peer reviewed resources which must be mentioned include anaesthesiamcq.com, and by extension the Kerry Brandis Anaesthetic Viva book (everyone should have one).

The principle of measuring a fluid compartment

The broad term to describe most of the techniques used for the measurement of body fluid compartments would be "indicator dilution technique". The key is to pick a marker substance that is distributed into the compartment of interest, administer a known amount of it, and then measure its volume of distribution. Thus:

Volume of the compartment = (dose of marker) / (concentration of marker)

That sounds easy in principle, but in reality it relies on the good behaviour of the marker substance, which would have to be:

Most commonly used markers fail at least one of these ideal requirements, but this has not stopped anybody.

Hilariously, when Prentice et al (1952) were researching the use of this dangerous radioactive isotope on human subjects, their work was sponsored by the Life Insurance Medical Research Fund and the U. S. Atomic Energy
Commission, and their subjects were "volunteers" from the San Quentin state prison.  They injected the tritium, waited some hours for it to equlibrate, Back in 1963, it was cool to inject healthy volunteers with radioactive isotopes. The process was probably easier in Communist Russia. Bromine 82 had been discovered as a satisfactory ionic tracer for this method. One should wait a full 24 hours before measuring anything. It takes time for tracer to enter the slow compartments of bone and connective tissue. If you measure too soon, all you will get is the volume of the functional extracellular fluid.

Unfortunately, some bromine-82 also distributes into the cells. Thus, bromine measurements of the ECF volume frequently over-estimate the ECF volume.

This technique was first discussed by a Yale group in 1947. They made much of its limitations. Unfortunately, crystalloid tracers don't distribute homogeneously into the various compartments of the ECF.

Also, mannitol drags the water out of the intracellular compartment, because it is osmotically active. This changes the volume which is being measured. Needless to say, this is an imperfect tracer substance.

The injection of Evans Blue dye is used, because this dye binds to albumin. This has also been used to investigate the fate of albumin, and the permeability of the blood-brain barrier. 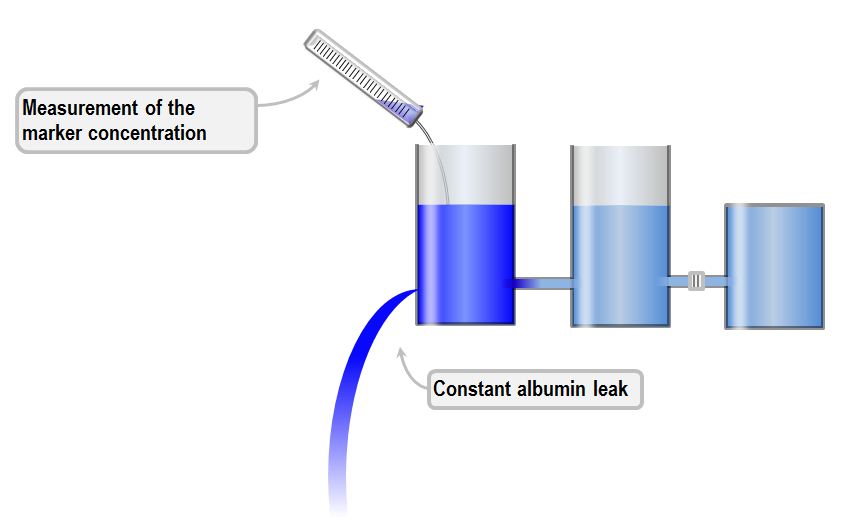 There is a constant leak of albumin out of the circulation, and so the tracer concentration must be measured on a logarithmic curve and then extrapolated to a "zero time" when the virtual volume of distribution is measured.

With albumin-bound tracer, you can arrive at the plasma volume. If you also know the haematocrit, you can calculate the blood volume (as it only consists of cells and plasma) This means there is no need to measure the volume of the red cells. Thus:

The problem is that the venous haematocrit is generally higher as the result of the Hamburger effect. Red cells in vein are bloated with the products of carbon dioxide transport, which is osmotically active, and causes them to swell. Additionally, in capillaries, axial streaming results in the separation of red cells and plasma, which means that the haematocrit of capillary blood is about 0.20. Lastly, red cells in the measuring tube are trapped together with some plasma, and that plasma goes unmeasured. Hence, haematocrit is overestimated.

53Cr labelled red cells are transfused. They are restricted to the vascular volume. 131I (radioactive iodine) can be used simultaneously to measure the plasma volume. Thus, haematocrit can be omitted from this calculation.