This chapter is relevant to Section I1(i) of the 2017 CICM Primary Syllabus, which expects the exam candidates to "explain the distribution and movement of body fluids and their measurement". Well, it's mainly all about the volume of the body fluid compartments. It has never come up in any CICM exam scenario, but because it is a subject full of memorisable facts and numbers, it is fair game for MCQs and could potentially come up in a future viva. The topic probably has some importance for calculating doses of electrolyte replacement; for example sodium and bicarbonate deficit equations call for the use of total body water.

Intracellular Fluid = 33% ( 23.1 litres) ; this volume is regulated by the movement of free water.

Extracellular Fluid = 27% (18.9 litres); this volume is regulated by the movement of sodium.

This material should seem very familiar; it appears in the first chapters of almost every physiology textbook, often as a series of stacked bar graphs describing the body composition of the Ideal 70kg Person. It is rarely referenced (because why would you), but if you dig around you will find that most of these textbooks get their information from the extensive and fascinating Report of the Task Group on Reference Man, by Snyder et al (1974). This thing was originally intended as an instrument to help scientists calculate dose following radiation exposure, and initially "it was agreed that the Task Group would limit its attention to those characteristics
of man which are known to be important or which are likely to be significant for estimation of dose from sources of radiation within or outside the body"
, because "however important or desirable it may be to have a Reference Man embodying all known characteristics of man, the task of defining such a Reference Man is clearly beyond the scope of the present effort". And then they went and did it anyway. It is available for download in its entire 500 page glory, in case you ever need to refer to it for something as granular as the fluid content of a newbortn's thymus, or the normal boron concentration of human hair (0.2-0.8 mg/100 g, by the way).

Volumes of the body fluid compartments

Report of the Task Group on Reference Man is, admittedly, a bit much for most readers. Instead of that, one could look at Bhave & Neilson, who have this excellent table of body water distribution among tissues: 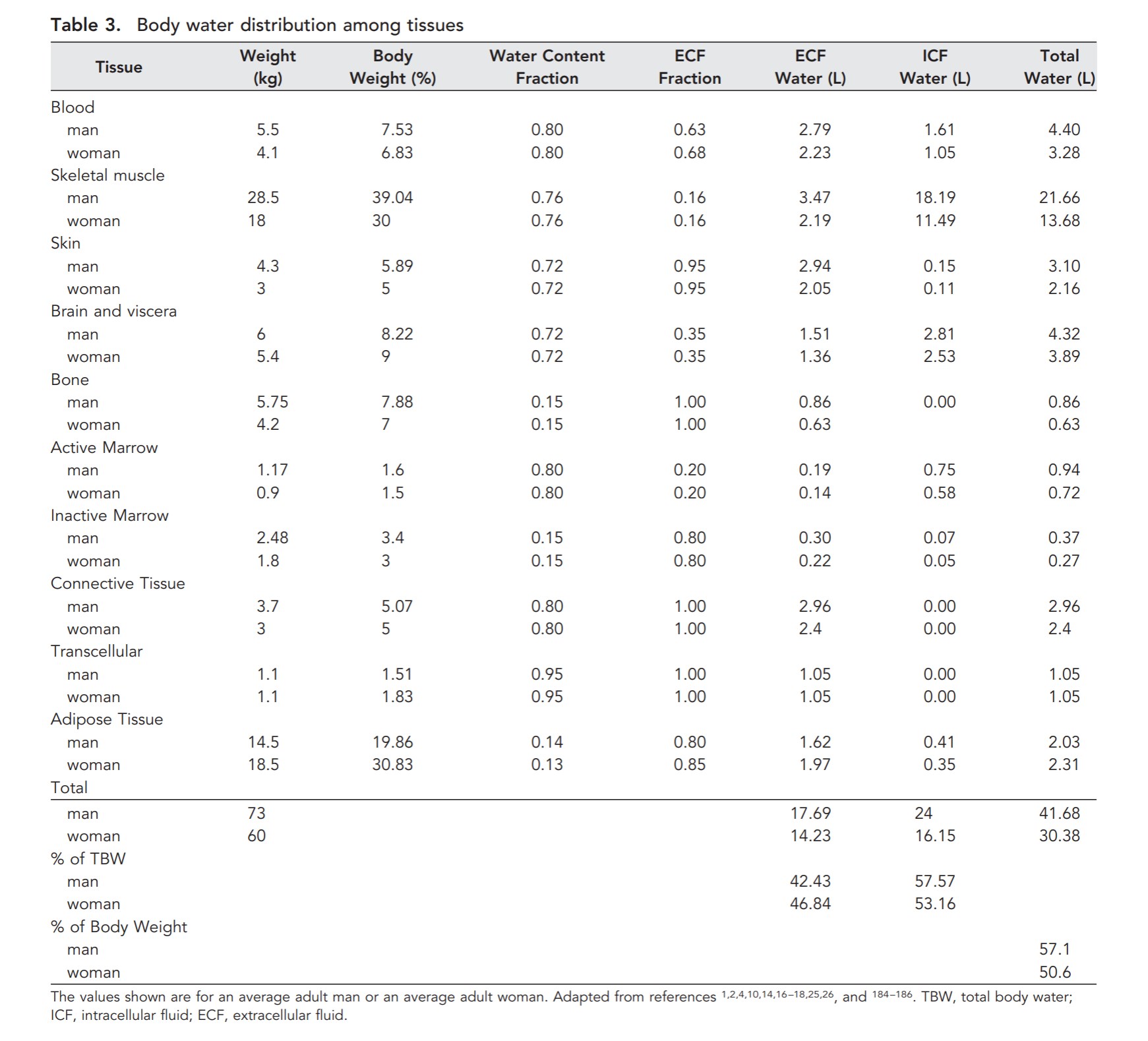