This chapter has some tenuous relationship to Section I1(i) of the 2017 CICM Primary Syllabus, which asks the candidates to "explain the distribution and movement of body fluids and their measurement". Intracellular fluid is the largest body water volume, and water certainly loves to move surprisingly freely in and out of this compartment, so it is probably worth discussing the factors that affect these movements and how they are controlled.

If the reader has some interest in reading the opinions of a legitimate expert in this field, they are invited to review this excellent 2004 paper by Kevin Strange. And if their level of interest borders on pathological obsession, they are invited to explore Kevin Strange's 1994 textbook, Cellular and Molecular Physiology of Cell Volume Regulation. Of this, the most essential chapter would be the first, an introduction to cell volume regulation by Hallows and Knaupff.

The majority of the intracellular volume consists of water. Without revisiting too much content from the chapter on the properties of intracellular fluid, that weird gloop that occupies the non-organelle spaces of a cell is a random soup of proteins lipids carbohydrates and electrolytes all suspended in an aqueous solution which is described as a water compartment even though it is in fact  a million billion tiny heterogeneous compartments all constantly communicating with each other.  That explains why each textbook gives slightly different values for the properties and contents of these weird little pockets, and so it would be impossible to quote any exact number to state exactly how much water is contained inside cells. It is possible to approximate that the non-organelle cytosol contains 20-30% macromolecules (mainly protein), and the most biologically important fraction of its water content exists only a hydrating molecular layer adsorbed onto the surface of the larger molecules. 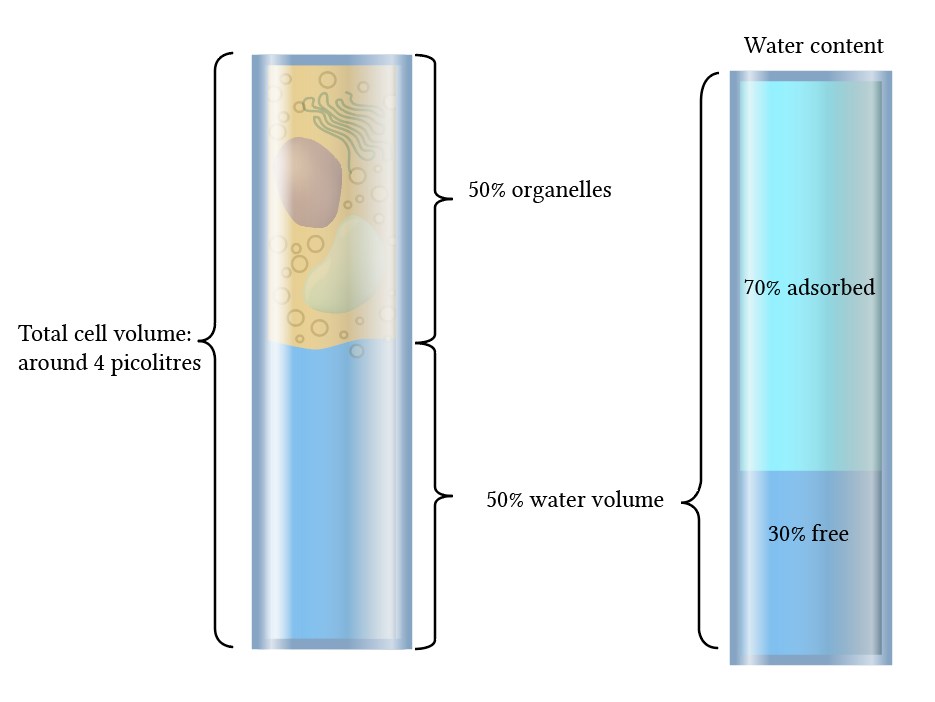 So: in summary, the water content of intracellular fluid is probably close to 70-80% of total intracellular fluid volume, but only a small and variable proportion of this is "ideal" liquid water, and the rest is "non-ideal" - integrated into macromolecules, too close to a surface to be active as a solvent or to move around. That non-ideal proportion can range from 30% to 90% of the intracellular water content, according to some experiments by Cameron et al (1997). The remaining volume of available liquid water is the volume we are concerned with in this section, because:

Yes, theoretically intracellular volume does not necessarily mean "fluid volume", and  massively accelerated synthesis of other, non-water substances could also contribute to large-scale changes in cell size. For example, Streptococcus salivarius can produce copious amounts of sugar polymers, increasing the volume of their cells up to some gross unnatural maximum. Practically speaking, it would be pointless to discuss that, because most mammalian cells would not be capable of this, nor is this process amenable to intervention, and so this material is of no interest to the ICU community.

With water being the main agent playing a role in cell volume, and with the movement of water across the cell membrane being relatively free, we can safely conclude that osmotic equilibria are the most important determinants of the intracellular volume. Osmotic pressure is a massively powerful force, and animal cells do not have any mechanism to resist it (unlike thick-walled plant cells, which routinely withstand many atmospheres of turgor pressure). This means osmotic pressure acting on animal cells is therefore usually close to zero, as they are not going to tolerate sustained pressure gradients. Instead, their volume will shrink and expand:  if anisoosmotic circumstances develop, water will rapidly equilibrate through the lipid bilayer, correcting the difference in osmolalities and changing the intracellular volume in the process.

From this, it follows that the most important factors that determine the volume of the intracellular fluid are those that influence the two Gibbs-Donnan effects acting on cell membranes. Without revisiting the entire chapter dealing with the Gibbs-Donnan effect, the reader is reminded that:

Thus, the main determinants of intracellular volume are:

We should probably deal with these in turn.

Unfortunately the CICM exam candidate probably needs to be at least vaguely aware of these factors even though there's nothing that they will ever be able to do about most of them.

Activity of the Na+/K+ ATPase

This factor is so essential that we can completely forget about it. The words "critical" or "central" would be reasonable adjectives to describe the importance of ATP-powered sodium transport out of cells. Just see what happens when it breaks down. For example, Russo et al (1977) incubated a bunch of rat liver cells in the presence of an ATP synthesis inhibitor (cyanide) and a Na+/K+ ATPase inhibitor (ouabain) to see what might happen to their cell volume. The cells swelled "markedly", and though the authors do not offer specific measurements, they did point out that the intracellular water content increased by about 60%, which means the cells swelled by approximately the same proportion. Though this is interesting, and undoubtedly important from a cell physiology point of view, the pragmatic intensivist would probably point out that the patient with a substantial ouabain or cyanide overdose has many problems unrelated to cell swelling. In other words, widespread Na+/K+ ATPase dysfunction is simply not something you are ever going to see at the bedside, apart from the context of death, and the reader would only ever need to remember this factor for the purpose of siting their exams.

This is of interest because the extracellular fluid is susceptible to our manipulation (whereas there are not a lot of ways in which a clinician could directly influence the concentration of solutes inside the patient's cells). There are numerous examples of extracellular fluid solute changes causing an anisoosmotic environment which results in a change in the intracellular fluid volume. To name a few:

These are not something we ever directly manipulate. These are largely under the control of cellular regulatory mechanisms, which typically act in the acute defense of the cell faced with osmotic stress. Where it is faced with some sort of osmotic stress (be it swelling or dehydration), a cell responds with mechanisms which aim to decrease the difference in osmolality between the internal and external environment. There are actually multiple such mechanisms (Hallows and Knaupff  list several examples) and they are discussed in more detail in the chapter which discusses the control of intracellular volume and composition. In summary:

The attentive reader will notice that in each case the main event is the intake or removal of potassium and chloride, which are the main osmotic actors in the ionic milieu of the cell. Additionally,  the rapid uptake or export of organic molecules (amino acids, polyols, urea, etc) could be considered an option, but it is a fairly minor player in animal cells. They play more of a role in bacterial and fungal cellular osmoregulation. For animals it seems the main amino acid osmolyte is taurine, and Hoffman & Dunham (1995) claim that up to 30% of an RVD response (regulatory volume decrease) could be due to the leak of intracellular taurine.

Otherwise known as "idiogenic osmoles", the concentration of these substances is not something cells can alter acutely, but over time this is the main mechanism by which cells acclimatise to sustained anisoosmotic conditions. Again, it is something already covered elsewhere, but in brief summary:

These "idiogenic osmoles" are also occasionally referred to as "compatible" or "nonpertubring" solutes, because they are chemically quite inert, and do nothing particularly interesting even when they accumulate in large concentrations.

Having patiently finished reading up to this point in the chapter, one might be asking "why do we even care about any of this?" Rightly so, because intracellular volume seems like something quite distant from real medicine, completely separate from the extracellular volume into which we pour all our resuscitation fluid. Well: intracellular volume and intracellular osmolality do have considerable importance. To borrow a list of generic consequences from Ho (2006):

More specific problems which are seen with osmotic stress include:

Most cells, it must be said, do not normally experience osmotic stress, because we mammals are quite awesome at maintaining our extracellular fluid osmolality within a very narrow range. The most important exception is the renal medulla. Medullary cells routinely become severely dehydrated (osmolality in excess of 1200 mOsm/kg), and red cells passing through this area of the circulation are also exposed to extreme osmotic stress.  Hoffman & Dunham (1995) describe their response, which involves rapidly absorbing (and then again rapidly losing) a substantial concentration of urea though high-volume urea channels.

From all these intracellular osmodefense mechanisms, one might surmise that animal cells must have some sensors with which they can detect when their volume or osmolality are changing. It appears these sensors are quite sensitive - osmolar changes of 2-3%, in the case of some renal tubular cells used by Lohr & Grantham (1986), were enough to produce compensatory responses. However, how exactly cells detect these changes remains to be fully explained, to the point where sincere authors on the subject include words like "we know so much and yet understand so little" in the title of their review article.

Several intelligent suggestions have been made. Possible methods of sensing volume change include:

Hoffman & Dunham (1995) describe a lot of other possibilities, but the reader is reminded that most of these data come from studies on yeast and bacteria, i.e. they prove that it is possible to sense volume and osmolality in these ways, but not that the human cells would do so.

Russo, Matteo Antonio, G. D. V. Van Rossum, and T. Galeotti. "Observations on the regulation of cell volume and metabolic controlin vitro; changes in the composition and ultrastructure of liver slices under conditions of varying metabolic and transporting activity." The Journal of Membrane Biology 31.1 (1977): 267-299.

Hoffmann, Else K., and Philip B. Dunham. "Membrane mechanisms and intracellular signalling in cell volume regulation." International review of cytology 161 (1995): 173-262.

Toft-Bertelsen, Trine L., Brian R. Larsen, and Nanna MacAulay. "Sensing and regulation of cell volume–we know so much and yet understand so little: TRPV4 as a sensor of volume changes but possibly without a volume-regulatory role?." Channels 12.1 (2018): 100-108.

Hoffmann, Else K., and Philip B. Dunham. "Membrane mechanisms and intracellular signalling in cell volume regulation." International review of cytology 161 (1995): 173-262.