This chapter is relevant to Section I1(i) of the 2017 CICM Primary Syllabus, which expects the exam candidates to " Explain the distribution and movement of body fluids". Or, to be more specific, "describe the physiological consequences of the oral ingestion of 1 litre of water in a young adult". This was Question 1 from the second paper of 2019. From the college answer, it felt as if they were actually looking for a ADME answer, i.e. they wanted the trainees to treat H2O as a drug and to discuss the pharmacokinetics and pharmacodynamics of oral water, where the pharmacodynamics apparently are all the neurohormonal and reflexive cardiovascular responses to increased body fluid volume.

Sure, if that's what's required to pass this thing:

Absorption is near-complete, rapid, and mainly occurs in the proximal small bowel

Distribution  is equal into all body fluid compartments, and proportional to their relative sizes:

Elimination is by renal excretion, where the filtered fraction is reabsorbed by a highly regulated mechanism

The best, and unfortunately the oldest, of the resources which were helpful in constructing this page was the 1956 review by Jack Rosenbaum, "The Fate of Ingested Water". For whatever reason, nobody in subsequent years has ever taken it upon themselves to go through this subject matter with the patient detailed granularity of this elder scholar. Multiple modern papers are available to discuss the minute details of aquaporin channel genetics, but in the journals of this age the forest cannot be seen for the trees.

Absorption and bioavailability of oral water

Water has basically 100% oral bioavailability, and is absorbed rapidly through the gut wall, mainly in the small intestine. There is a constant water content in the bowel lumen (apparently it is about 1.5% of the total body water, according to cadaver studies), so one cannot say that water is completely absorbed, but it could be if it wanted to be. As pure hypotnic water enters the body through the mouth (or NG tube), it almost immediately becomes isotonic by mixing with saliva, stomach juice and other intestinal fluids (Rosenbaum, 1956). Most of the absorption occurs in the proximal small intestine.  The movement of water across the gut wall is mainly osmotic, following the concentration gradient of other actively and passively absorbed electrolytes, which has implications for the formulation of oral rehydration solution (Leiper, 1998)

The pKa of water is 15,74, and it is arguable whether it is protein-bound, considering that the hydration of proteins contributes so significantly to their tertiary and quaternary structure.

Water is eliminated renally, where he vast majority of it is reabsorbed after being filtered. The ultimate regulatory responsibility for the elimination of water falls to vasopressin and the collecting duct cells, which is discussed below. The half life of a litre of water will usually be an hour, as these regulatory mechanisms are

If we behold the man as a boring isoosmolar soup, the behaviour of the ingested water becomes easier to handle.

As one has just ingested 1L of solvent and added it to the existing volume (40L), one should be expecting for all the solutes in this volume to become more dilute - by precisely 1/40th. This would be the simplest model to describe the changes in body fluid composition. Water, after all, is expected to distribute proportionally into all compartments. The result would be a drop if the plasma osmolality from 280 to approximately 273 mOsm/kg.

Does this actually happen? Endo et al (2001) looked at the question in the finest possible detail. Their volunteers were hooked up to arterial lines, continuous blood density measurement devices and ion selective electrodes for keeping an eye on the electrolytes. The resulting data collected from these experiments had amazingly fine resolution:

Thus, a definite drop in plasma osmolality occurs, which is in magnitude very close to what would be expected from a very simple one-compartment model. This fall (a 2.5% decrease) is enough to stimulate the osmosensitive systems in charge of defending the tonicity of the body fluids.

Consequences of a fall in plasma osmolarity

Changes in osmolality are felt by your personal osmosensor, the organum vasculosum of the lamina terminalis, which is one of the circumventricular organs that does not have a blood brain barrier, and is therefore able to directly perceive changes in the composition of the blood. Its sensitivity, according to Schrier et al (1979), is something in the order of 1% magnitude difference, i.e. the plasma osmolality would only need to fall from 280 to 277.2 mOsm/L.

To paraphrase some dot points from the chapter concerning the humoral control of blood pressure and flow, the following reflex activity takes place when osmolality drops:

The net effect of these compensatory mechanisms is to increase the elimination of water, which typically occurs within the same hour. The plasma half-life of vasopressin is reasonably short, perhaps twenty minutes under the right conditions, and when osmolality changes vasopressin secretion can be completely turned off - according to Robertson et al (1976), all it takes is a 2% decrease in plasma osmolality. The result is a rapid and complete correction of the osmolality and body volume back to its original state.

Additionally, one must point out that it takes a few minutes to dilute the plasma, but if one examines one's own experience of drinking fluids, one will recall that the sensation of relief and reduced thirst one experiences is rather immediate, and therefore cannot possibly be explained by osmolality tricks alone. Bichet et al (2019) were able to identify all sorts of other mechanisms which decrease the subjective experience of thirst, most of which were "extrasensory and anticipatory", involving limbic processing of aversive states. That is not to say that osmolality has no role to play: by injecting hypertonic saline directly into the circumventricular organs of some truly cursed goats, Andersson and colleagues (1953) were able to produce a nightmare polydipsia, with some of the goats drinking up to eight litres of water before feeling sated.

Consequences of a fall in plasma sodium concentration

As demonstrated by the graphed data above, the plasma sodium level drops. Of the aforementioned humoral system of blood pressure and flow control, the vast majority are sensitive to even small fluctuations in plasma sodium. Of these, the most important is probably the renin-angiotensin-aldosterone system. The aldosterone specifically has the effect of stimulating sodium reabsorption throughout the tubule by changing the expression of an apical sodium channel.

Consequences of an increase in the circulating volume

The conventional teaching is that the circulatory effects of oral water (or IV water surrogates like 5% dextose) can basically be summarised as zero, as the volume does not increase very much. The distribution of the ingested water into every compartment means that no single compartment increases in size dramatically, and therefore neither does the blood volume. Theoretically, the blood volume should increase by something like 80-100ml, which will not have very much effect on the blood volume and venous return. And if the preload does not change much, then the stroke volume and blood pressure does not increase either, which means there is no need for the regulatory cardiovascular reflexes to get involved. In short, the blood pressure, heart rate and other cardiovascular parameters should remain stable.

A small fall in osmolality and a trivial change in blood volume are what the college expected to see in the written answer to Question 1 from the second paper of 2019. "The volume load after distribution would be lower than the plasma volume triggers for the circulatory reflex responses", they insisted in their comments. It goes without saying that any additional or contrary material would probably be viewed as heretical, and would (in the best case scenario) simply score no marks.  Or potentially it could enrage the examiner to the point of destroying the paper and a part of the desk it was on. It is simply impossible to guess. Nonetheless, it would be amiss to omit some interesting physiological effects of drinking water that do not fit into the normal clockwork universe of the CICM First Part paper.

Specifically, it appears that drinking water has some sort of unexpected vasopressor response, associated with a decrease in heart rate. This has been demonstrated in numerous ways and by numerous authors. For example, there's the MAP graph from Endo et al (2001): 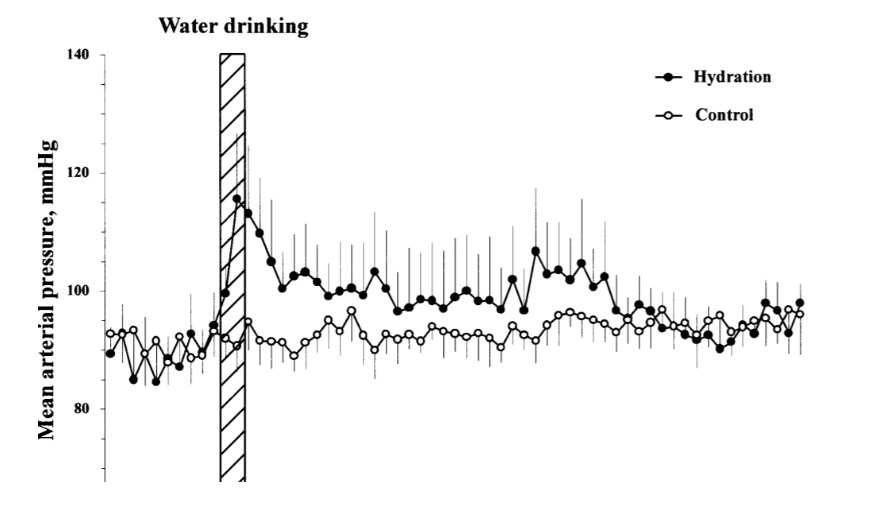 This was also demonstrated Jens et al (2000), who had giving half a litre of water to normal human subjects,  andfound that it increased the systolic blood pressure by about 11 mmHg in the elderly patients (though by less pin young healthy people). Schroeder et al (2002) experimented on patients with severe autonomic dysfunction and found that drinking water markedly improved their haemodynamic tolerance of posture changes. This seems to be a sympathetic thing: Scott et al (2001) directly measured sympathetic nerve activity and serum noradrenaline levels to demonstrate that both were raised, and Jens et al (2000) were able to completely abolish the effect they found by giving their patients a ganglionic blocker. Classically, as one might expect in response to systemic vasoconstriction, a vagally mediated fall in blood pressure is seen - in normal healthy subjects, the magnitude of this change was about 7 beats per minute for Routledge et al (2002).

So, some kind of weird autonomic thing happens when people drink water, and it even happens when they drink relatively trivial amounts of water (eg. in most of the studies above, the intervention volume was only about 500ml). What could possibly account for this? Because there is no way that this could be mediated by any volume effect of the water itself. ICould it be that this is some sort of strange effect related to the hypoosmolarity of the ingested fluid? When Brown et al (2005) fed isotonic saline to their volunteers, they found none of these blood pressure raising effects. "That these effects were absent after drinking physiological saline indicate that the cardiovascular responses to water drinking are influenced by its hypoosmotic properties", they concluded. But then, looking at the first half an hour of data from Endo (2001), the blood pressure rise happens well before the change in plasma sodium (which takes about half an hour to manifest).  Moreover, the effects were accentuated when the temperature of the ingested water was lowest, and with water at body temperature, Girona et al, (2014) were unable to detect much of an autonomic response whatsoever. In short, nobody knows what the hell is going on, and certainly nobody can guess what coalface bedside relevance it has. To finish on an unintentionally hilarious turn of phrase from Endo et al,

"It is not certain whether or not this kind of blood pressure change occurs in normal daily life, since the drinking of 1 l water in 2 min is not a common activity."

Andersson, Bengt. "The Effect of Injections of Hypertonic NaCl‐Solutions into Different Parts of the Hypothalamus of Goats." Acta Physiologica Scandinavica 28.2‐3 (1953): 188-201.

ROBERTSON, GARY L., and SHAHID ATHAR. "The interaction of blood osmolality and blood volume in regulating plasma vasopressin in man." The Journal of Clinical Endocrinology & Metabolism 42.4 (1976): 613-620.