Response to haemorrhage: the loss of 1L of blood

This chapter is relevant to Section I1(i) of the 2017 CICM Primary Syllabus, which expects the exam candidates to "explain the distribution and movement of body fluids". In this specific scenario, the movement of the body fluids is out of the body. It has come up a couple of times, as the college has asked direct questions about "what happens when you lose X amount of blood?", specifically in Question 2 from the second paper of 2009, and Question 11(p2) from the first paper of 2008.

Weirdly there is no specific category for this in the syllabus. Fortunately, there's plenty of non-specific categories, and they cover the area in substantial granularity. Section G6(i) talks about "the response of the circulation to ...haemorrhage", and those are lovingly detailed in the chapter on the cardiovascular response to haemorrhage and hypovolaemia. The effects of the loss of actual haemoglobin is mentioned in cardiovascular response to isovolaemic anaemia, and the haematopoietic recovery from blood loss is discussed in the chapter dealing with the production of red blood cells.

In Question 2 from the second paper of 2009, the college supplied the candidates with a patient weight. From this, they were expected to deduce that the staging of shock was a part of the marking criteria. "When a weight and a volume are supplied it is expected the percentage blood loss would be calculated and the shock graded or the haemorrhage at least described as severe", the examiners complained when some of the trainees were unable to read their minds. The classification of haemorrhagic shock they were probably referring to is the ATLS system from the American College of Surgeons:

You can read more about the validity of this system in Guly et al (2011). In short, it appears that one does not score marks here unless one explicitly states that the loss of 40% of one's circulating volume is "severe haemorrhage", presumably because to omit this would mean that one does not recognise the situation as being particularly serious.

This is the discussion of the loss of 1 litre of whole blood; that is to say, about 300ml of cells and 700ml of plasma fluid, as well as all the dissolved electrolytes and proteins. So together with 1 litre of blood, you lose about 40 grams of albumin, 140mmol of sodium, 100mmol of chloride, 4mmol of potassium, and so on and so forth. This volume of haemorrhage was chosen deliberately, partly because it is not a “mild” blood loss (to lose 20% of your circulating volume is a rather substantial problem), but mainly because it makes all the calculations very easy. The immediate changes relate to the loss of circulating volume.  The removed fluid is whole blood; what remains behind is also whole blood; provided the haemorrhage occurred rapidly, there has been no time for the composition of the intravascular fluid to change, and if one were to take a sample of the intravascular blood, one would not detect any changes. The haematocrit and the concentration of electrolytes will not be altered at this early stage, as the compartments have not yet had a chance to equilibrate.

The topic of cardiovascular response to haemorrhage is sufficiently interesting that an entire chapter has been dedicated to discussing it in the cardiovascular section. Here, the following brief summary will suffice: 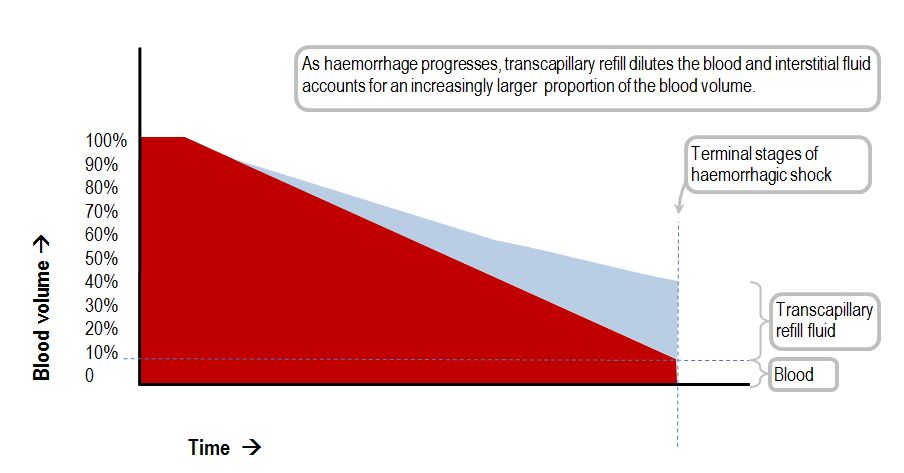 After bleeding for 30 minutes, there was around 20ml/kg of transcapillary fluid in the circulation (which is generally held to be 70ml/kg) – another words, after half an hour of bleeding the blood volume is already diluted and contains about 30% interstitial fluid. These numbers are consistent with the gospel of St. Brandis; the chapter on rapid blood loss reports that up to 1000ml of fluid per hour is restored to the intravascular compartment in this fashion. The interstitial fluid deficit is replaced over the period of some hours by systems which can be broadly described as the humoral defense of blood flow and volume. At a basic level, these can be summarised as hormonal processes (such as the activation of the renin-angiotensin-aldosterone system) which result in sodium retention. Because sodium is distributed into extracellular fluid, this also means the expansion of the extracellular fluid volume, which would be welcome under the circumstances.  There may be some shift of water out of the intracellular compartment, but because the concentration of extracellular sodium does not change very much with haemorrhage, there is little osmotic incentive for water to move out of cells.