Distribution and regulation of sodium in the body fluids

This chapter is relevant to Section I3(ii) of the 2017 CICM Primary Syllabus, which expects the exam candidates to "describe the function, distribution, regulation and physiological importance of sodium, chloride potassium, magnesium, calcium and phosphate ions". For some reason, in the CICM First Part exam this crucially important electrolyte has been rather neglected, with only Question 23 from the second paper of 2014 asking the trainees about its distribution and regulation. The college more than made up for it in the Second Part exam, where hyponatremia is a constant thorn in the candidates' side.

Regulation of sodium and water elimination

Unregulated sources of sodium loss in the ICU

It would seem as if everybody who has ever held a distinguished lectureship of water and electrolyte homeostasis has at some stage written a sodium paper, which means that there really is no shortage of material to recommend the reader who needs a peer-reviewed alternative to all these unreliable online resources. A good representative would be Skøtt (2003), if people really needed somebody else to filter through their search results, but realistically every published resource seems to contain essentially the same information and all of them would satisfy the requirements of the CICM First Part exam. For something truly comprehensive, Michell's The Clinical Biology of Sodium (1995) is an absolute hoot, and despite its age has held up very well (also apparently there is a second edition from 2014).

Distribution of sodium in the body fluid compartments

The average human body sodium content is usually given as 60mmol/kg. Whenever one sees these sorts of figures about sodium in textbooks, the origin is usually "Anatomy of body water and electrolytes" by Edelman & Leibman (1959).   A 70kg male has about 4200 mmol, or about 92g of sodium. Of this, 70% is “exchangeable” and the rest is locked up in bone crystal, as well as being bound to various molecules in soft tissue, and thereby rendered biologically unavailable. Of this remaining 70%, about 25 is confined to connective tissue and "exchangeable" bone reserves, and about 45% is dissolved in the body fluids.

Body fluid sodium is almost exclusively extracellular; only about 5% of the total sodium in the body water is distributed into the cells. Of the extracellular compartments, its concentration in the intravascular and interstitial fluids is similar but not completely equal. 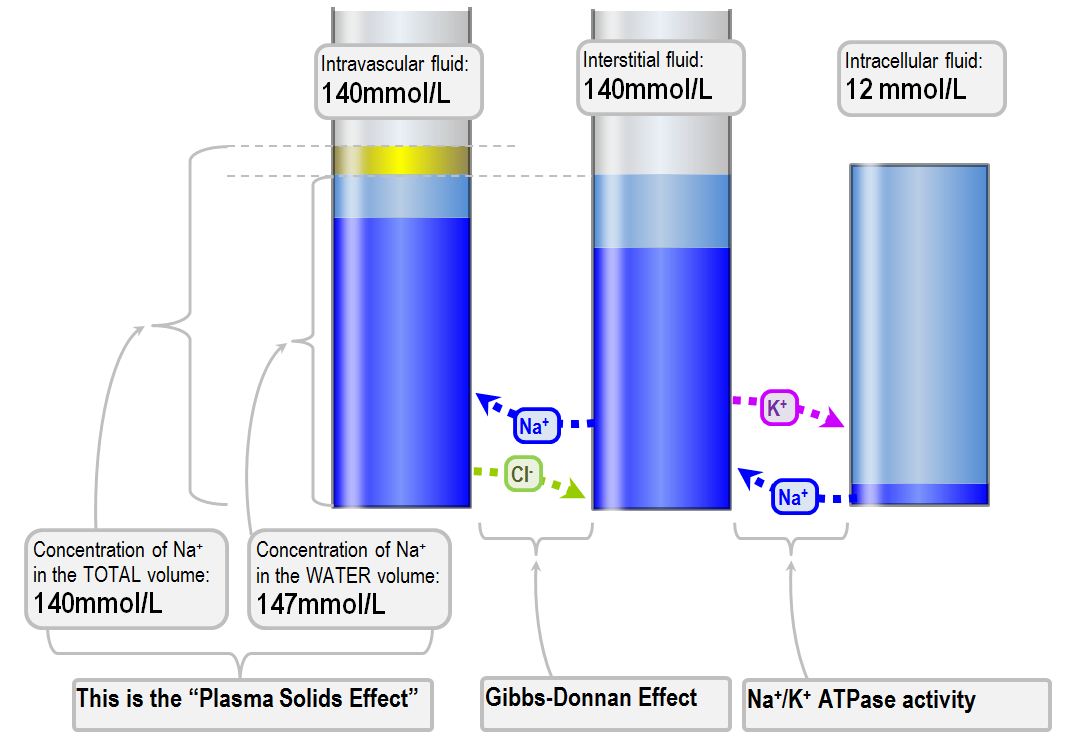 The main reason for the extremely unequal distribution of sodium between the intracellular and extracellular fluid is Na+/K+ATPase activity: sodium concentration inside the cell is kept artificially low because it exchanges 3 sodium ions for every 2 potassium. The distribution of sodium between the intravascular and interstitial compartments is a bit more equal, and is the result of two potentially examinable physicochemical effects

There are three main mechanisms of intestinal sodium transport:

Sodium absorption occurs at every level, though the mechanisms change.

"Sodium intake is essentially unregulated in humans", snorted the college examiners in their answer to Question 23 from the second paper of 2014. This statement is not entirely true, but is close enough for government work.  Like with potassium, the human intestinal tract has no interest in limiting your access to sodium; but unlike potassium, sodium does not just sneak across the border - it is transported by transcellular mechanisms. In fact the human intestinal tract is a highly efficient sodium-extracting machine. The main reason for this is the need to hold on to precious sodium which is secreted along with all the gastric and intestinal fluid.

The turnover of intestinal sodium vastly exceeds dietary intake. A red-blooded Australian carnivore would normally consume 2500mg (110mmol) of sodium per day, which is about 50% more then the AHA would prefer. During the same day, his intestine would churn out approximately nine litres of various weird digestive juices, the content of which is lovingly detailed by various physiology authors. Without nauseating the reader with the stomach-churning detail from Spiller (1994), it will suffice to note that, as a part of this massive fluid load, the ileum receives about 400mmol of sodium per day, and reabsorbs half of it, with the colon taking care of the rest. As the result, normal faecal sodium content is actually rather low - about 30 mmol/L (for a contrasting comparison, there's a shitload of potassium, 75mmol/L). In fact a faecal sodium higher than 60mmol/L  is enough to suspect secretory diarrhoea. Now, one must be reminded that we do not all produce litres of stool per day, nor is the water content of stool very high. Under normal circumstances, perhaps 100ml of water is eliminated along with stool every day, which means to the total daily sodium loss is about 3 mmol.

So, in summary, the CICM examiners were basically correct: there is a massive capacity for sodium reabsorption in the gut, and even if you double the normal salt intake to 220 mmol/day, it will barely compare to the average workload of the intestinal sodium transport mechanisms, and all of it will basically end up absorbed, regulation be damned. All aldosterone and angiotensin can do is decrease the faecal sodium loss from 3 mmol/day down to 0 mmol/day. To borrow a turn of phrase from Michell (1995),

"The gut is not conventionally acknowledged to have an important role in the regulation of mammalian sodium balance, being over-shadowed by the kidney"

Extracellular sodium regulation is mainly a renal thing, where elimination of sodium and/or water can be rapidly and massively adjusted to produce rather abrupt changes to the extracellular sodium content. Anybody who has ever managed a patient with psychogenic polydipsia will recall their infinite capacity to surprise their endocrinologist with pons-demyelinating feats of sodium self-correction. The CICM examiners expected some detailed knowledge of this particular area. "Candidates needed to present the renal handling of Na including hormonal control and present factual knowledge about the level of absorption and GFR effects to attain a pass mark", they grated in their response to Question 23 from the second paper of 2014. What they actually meant by the cryptic terms "level of absorption" and "GFR effects " is of course impossible to determine, and because they are anonymous there's no accountability. However, we can guess what should have been expected by wise elders, on the basis of what we know to be important. So, here is some self-plagiarism, summarising the main points from the chapter on the renal handling of sodium:

Loss of sodium through sweat

Without digressing overmuch on the properties and contents of sweat, it will suffice to say that, in the unacclimatised subject sweating uncomfortably, sweat can account for a surprisingly large amount of sodium loss. Sweat may contain as much as 50-60 mmol/L of sodium, and a maximum perspiration water loss of about 11-12 litres per day is thought to be maximal (Robinson & Robinson, 1954), which means that theoretically it should be possible to lose 720mmol/day of sodium in the form of sweat. This is completely outside the realms of normal human experience, but people do tend to do weird things, and after they are found they tend to come to the ICU, which means intensive care trainees should probably know about this sort of stuff.

Regulation of sodium movement across the cell membrane

The concentration of sodium in the extracellular fluid is mainly regulated by the elimination of sodium and the intake of water. There is really no avenue to adjust the extracellular sodium concentration by moving it in or out of cells, at least not by a clinically significant amount. Or, rather, when sodium does move into cells, it does so rapidly, even explosively, and with the intention of depolarising the membrane to create an action potential. The uneven balance of intracellular and extracellular concentration is almost entirely the work of Na+/K+ ATPase, which pumps tirelessly in the basement of the cell to create useful Gibbs-Donnan phenomena.

So: unlike with potassium, which shifts harmlessly into cells under the direction of insulin each time you get a dietary load, we cannot simply take a pile of sodium and hide it under the carpet until it is convenient to excrete it later. Theoretically, it follows that if you ingest 140mmol of sodium, it should all end up in the extracellular fluid compartment should expand by 1000ml. That's not a huge amount of sodium (3200mg), considering the sort of instant noodles that sustained the author during medical school contain 4800mg (209 mmol) of sodium per packet, and it was totally routine to have two at a time. Why, then, did nobody ever notice their extracellular fluid volume increase by three litres after this sort of lunch?

Skin as an extracellular reservoir for sodium

So; when Heer et al (2000) convinced healthy volunteers to ingest up to 550 mEq/day of sodium chloride (i.e. 225mmol/day of sodium), the expectation was that they would swell hideously with fluid overload. Unexpectedly, the plasma volume increased only trivially (by about 350ml) and the total body water barely budged. At the same time, though their renal clearance of sodium increased, it did not increase enough, and the subjects began to develop a positive cumulative sodium balance - of several grams, in fact.

This extra sodium mainly went into their skin.  The skin, you may be surprised to learn, is a massive and highly flexible reservoir where huge amounts of osmotically inactive sodium can be stored. It lives there in a complex with glycosaminoglycans,  linear polysaccharide chains of variable length which bristle with carboxyl and sulphate functional groups. There's enough negative charge there to bind plenty of sodium, and it sure does this with great avidity. The capacity is massive, and none of it has any osmotic activity whatsoever, as technically the number of moles has remained unchanged - all of the sodium disappears into this glycosaminoglycan void. Amazed, Titze et al (2001) were able to create ridiculously sodium-enriched rats with a skin sodium content 180–190 mmol/L higher than usual. The same is seen in humans (Selvarajah et al, 2017). This salt reservoir can be mobilised in periods of sodium deprivation, and the exact mechanics remain obscure - for example, does it react to high sodium concentrations by sequestering it, or does it proactively remove sodium as it begins to rise?

Plenty of PhDs in there somewhere.