Distribution and regulation of magnesium in the body fluids

This chapter is relevant to Section I3(ii) of the 2017 CICM Primary Syllabus, which expects the exam candidates to "describe the function, distribution, regulation and physiological importance of sodium, chloride potassium, magnesium, calcium and phosphate ions". Magnesium the Sulfate has appeared three times in the past papers, but not Magnesium the Ion, which is sad because the pharmacology is boring but the physiology is fascinating. Question 19 from the first paper of 2012 was the only time this area was touched upon. The pass rate was only 20%, as it must have caught people off-guard.

Jürgen Vormann's 2012 paper on magnesium is probably enough for anybody, or Ahmed & Mohammed (2019) - both are free and written with an excellent structure.

Distribution of magnesium in the body fluids

The total body content of magnesium is approximately 15 mmol/kg. This means a 70kg male has about 1050 mmol, or about 25g of magnesium. Of this, 60% is locked up in bone. 39% is intracellular, and 1% is in the extracellular fluid. That means, the ECF contains only about 10mmol, at a concentration of approximately 0.7 mmol/L (though it can range up to 1.0).  Of the serum magnesium, about 40% is protein-bound (just like calcium), and some is complexed with phosphate lactate citrate, just like calcium, leaving about 55% as a free biologically active ion. In case people prefer a nice table of percentage body distributions, here's one from Vormann (2012). 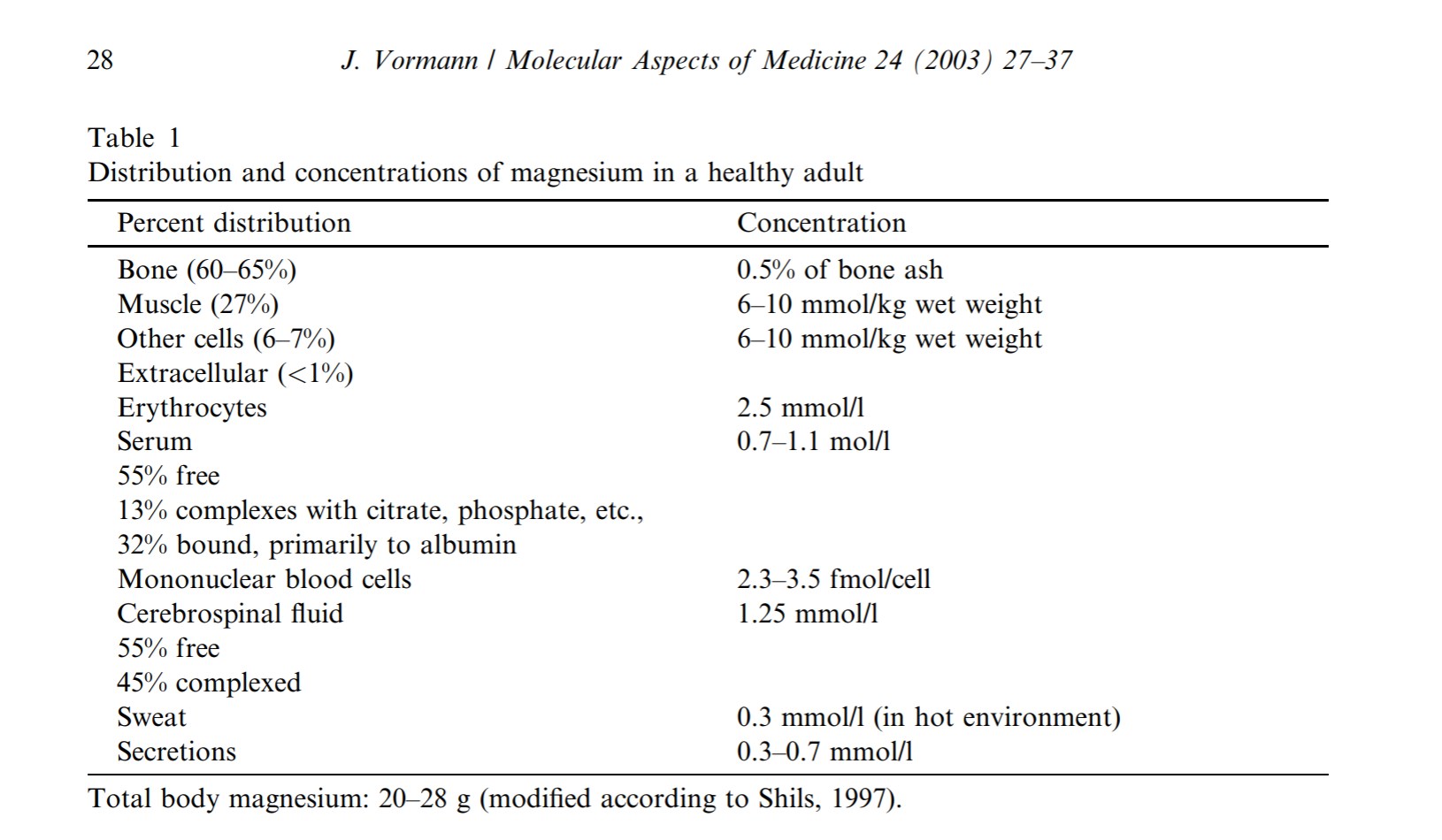 Magnesium equilibrates freely across the extracellular fluid. There isn’t enough of it to matter seriously in any of the Gibbs-Donnan effects, or to contribute significantly to the various osmolar forces, but - if we were going to be nerdishly pedantic - we would have to admit that the Gibbs Donnan Factor for divalent cations is 0.90, which means if the plasma concentration of magnesium is 1.0 mmol/L, the interstitial fluid and lymph has only 0.9 mmol/L.

Intracellular magnesium is bound to ATP, cell wall lipids and many various enzymes, as those enzymes require magnesium to function. Additionally, magnesium, like calcium, binds to the phosphorylated groups of the cell wall lipids, and acts as a membrane stabilizer. The total concentration is therefore massive (perhaps in order of 20mmol/L) but the vast majority of this is not bioavailable.

What is the intracellular concentration of free magnesium? This is difficult to estimate. Intracellular fluid is not a politely well-circumscribed pool of testable liquid, it is a ragged-edged mess of hydrated gel with little actual free water, to say nothing of free ions. Raftos et al (1999) measured a value of around 0.2-04 mmol/L in red cells, which is only slightly lower than plasma; Grubbs (2002) reported the findings of several other studies which got a range of 0.93 mmol/L for frog skeletal muscle, 0.72 mmol/L for guinea pig and 0.85 mmol/L for ferret ventricle, all the way up to 1.5mmol/L for some experiments. In short, something like 1.0 mmol/L should be a safe number to quote in a written exam answer, in the unlikely case that it ever comes up.

Only 30% of dietary magnesium ends up being absorbed, and of this amount, 90% is absorbed by passive paracellular mechanisms (Kerstan & Quamme, 2002). The rest is subject to some sort of saturable transcellular facilitated transport, mainly in the distal small bowel (jejunum and ileum). Interestingly, nobody seems to known what that mechanism is, or what exactly regulates it. It seems to respond to plasma levels, in the sense that patients or experimental animals with low plasma magnesium will retrieve a larger proportion of their dietary magnesium dose, whereas magnesium-replete organisms will leave it unabsorbed in their bowel.

Apart from oral intake and renal elimination, the amount of magnesium in the extracellular fluid can also be influenced by the exchange of magnesium into and out of the bone pool. This does not seem to be a fast or reliable mechanism of getting extra magnesium if you have a dietary deficiency (Maguire & Cowan, 2002). It may be regulated to some extent by PTH, as hypomagnesemia can cause both depressed PTH secretion and impaired tissue response to PTH.

Under normal circumstances urinary magnesium is highly conserved, i.e. only about 3% of the filtered magnesium ends up escaping in the urine (Ahmed & Mohammed, 2019). The first two mechanisms are fairly static in their proportional contribution, but the distal convoluted tubule mechanism is an active transport process that seems to be under the control of a divalent cation sensing receptor, which means it increases or decreases its activity according to plasma levels. Dai et al (2001) discuss this mechanism in great detail; to summarise for the impatient reader, the entire length of the nephron seems to express a calcium/magnesium sensitive receptor which resembles the one you find in the parathyroid gland, and it mediates all sorts of constructive reabsorption-antagonistic activity whenever it is bound to a divalent cation.

"Magnesium plays a vital role in over 300 reactions involving metabolism", "has several critically important roles in the body", or "essential for innumerous functions" is the kind of vague motherhood statement you usually see in the opening lines of a scientific paper about magnesium. Again, as with all "physiological role" descriptions, it seems pointless to call something out as "essential" or  "critically important", as the same could be said for any electrolyte;  the absence of anything would be disabling (just look at the effects of molybdenum deficiency). That "300 reactions" factoid comes from a 1981 paper by T.H. Gunther, and seems to be a randomly chosen number to describe the numerous enzymes which require magnesium as a co-factor.  In short, those opening sentences don't answer anything. If magnesium was called in to a performance review meeting, how would it justify its continuing position in the organisation?

The best answer to that question comes from an old paper by Michael F. Ryan (1991), which literally contains a table titled "physiological functions of magnesium". Here it is, essentially unchanged: