Measurement of glucose (cGlu) and measurement of lactate (cLac) fall with measurement of dissolved oxygen concentration using the Clark electrode into the category of amperometric measurements, the principles of which are discussed in abundant detail elsewhere. As a main reference for this topic, I refer the readers to an excellent overview article by Joseph Wang, which delves into the historical aspects of glucose monitoring, and explores various other methods of measurement.

Structure of the glucose-sensitive electrode

Glucose itself is a molecule which is irritatingly inert from the electrochemical perspective. For this reason, the E7066 electrode in the local unit relies on glucose oxidation by an enzyme, which generates a product (hydrogen peroxide) which is more easily reduced.

One might detect a certain similarity between the diagram below and the diagram of the Clark oxygen electrode, offered in the chapter on polarographic oxygen sensors. This makes a certain historical sense. The first of these glucose sensors was developed by Clark and Lyons, and consisted of a Clark oxygen electrode with an enzyme-filled dialysis membrane strapped to the front of it. 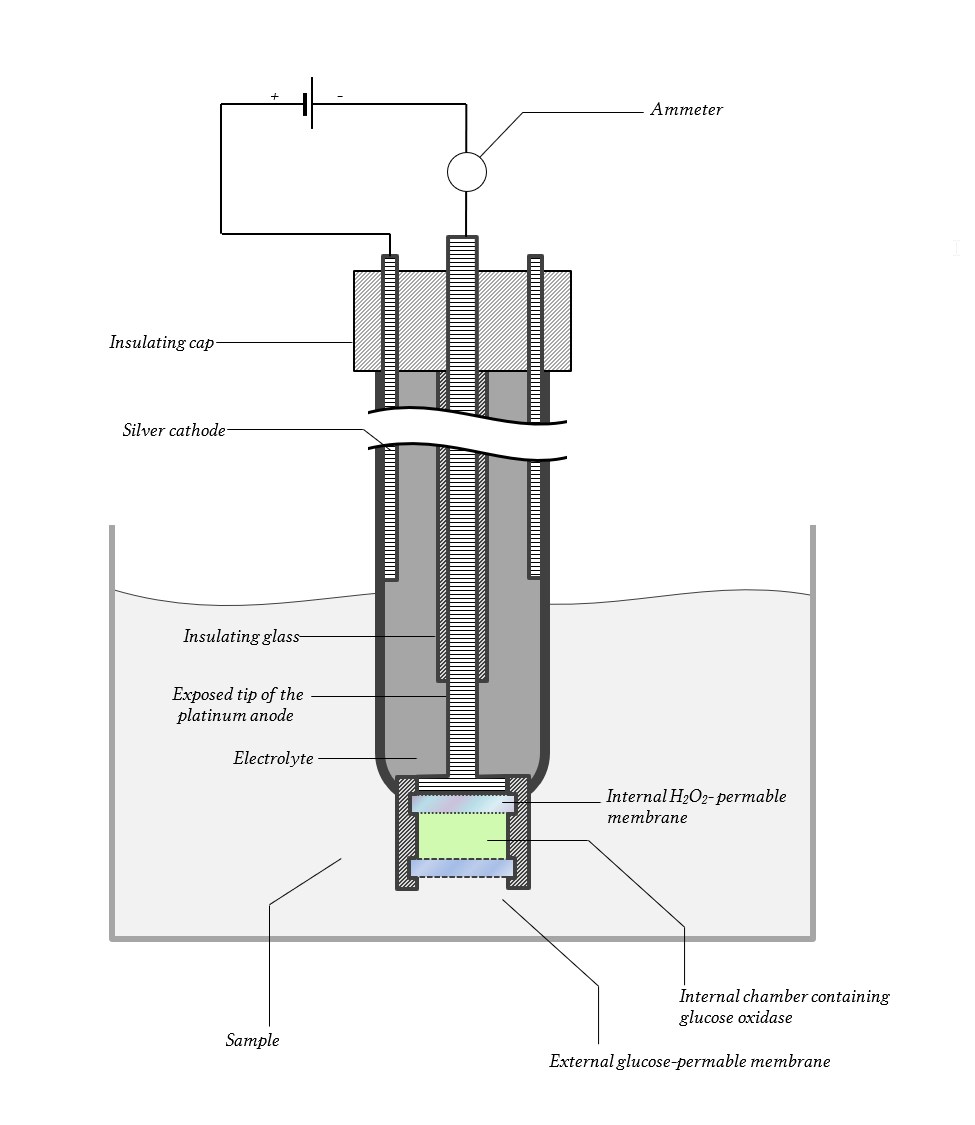 The actual glucose electrode in your ABG machine may not have this exact structure. It would depend on what is being measured. For example, the classic glucose electrode measures the oxidation of hydrogen peroxide, which occurs at a platinum anode (Yoo & Lee, 2010). Other sources, depicting generic electrodese, have the anode and cathode flipped, because they usually discuss the measurement of the reduction of oxygen, eg. in this artwork from Updike & Hicks (1967): 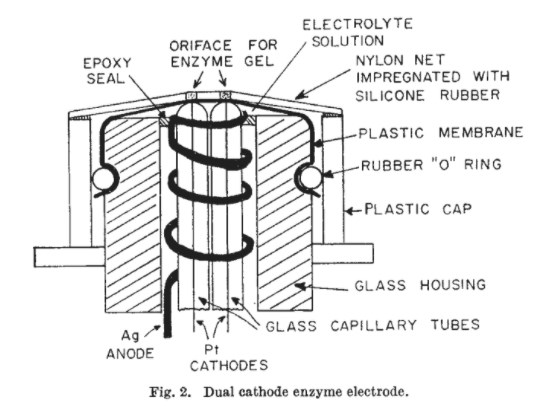 The electrode needs a special multilayer membrane, which is composed of three major components:

Though it is easiest to represent such cells with the use of a "middle enzyme chamber", more modern reinventions of this apparatus typically include the enzyme as a part of the outer membrane matrix, its molecules immobilised in some sort of polymer film. The major complaint with these electrodes is the gradual degradation of the enzyme layer - these proteins are fragile and tend to denature with time, leading to decreasing electrode sensitivity. Embedding them in a polymer seems to protect them from decay. Precisely which polymer offers the best protection remains a matter of debate; numerous publications exist describing the virtues of one polymer or another.

Events which take place in the middle chamber

Anyway. Glucose enters the middle chamber via a glucose-selective membrane. This membrane is probably not as highly glucose-selective as one might think; various other molecules probably come and go as they please. Fortunately, glucose oxidase offers another layer of selectivity - of the molecules which do manage to get into the middle chamber, it is mainly interested in the glucose. Cross-sensitivity does occur, and one may use various correction factors to get around it. The Reference Manual lists a large number of molecules which can potentialy cause interference (notably ascorbic acid, bilirubin, citrate, EDTA, ethanol, heparin, lactate, paracetamol, salicylate and urea). The glucose oxidase enzyme in these sensors is usually a bacterial enzyme. 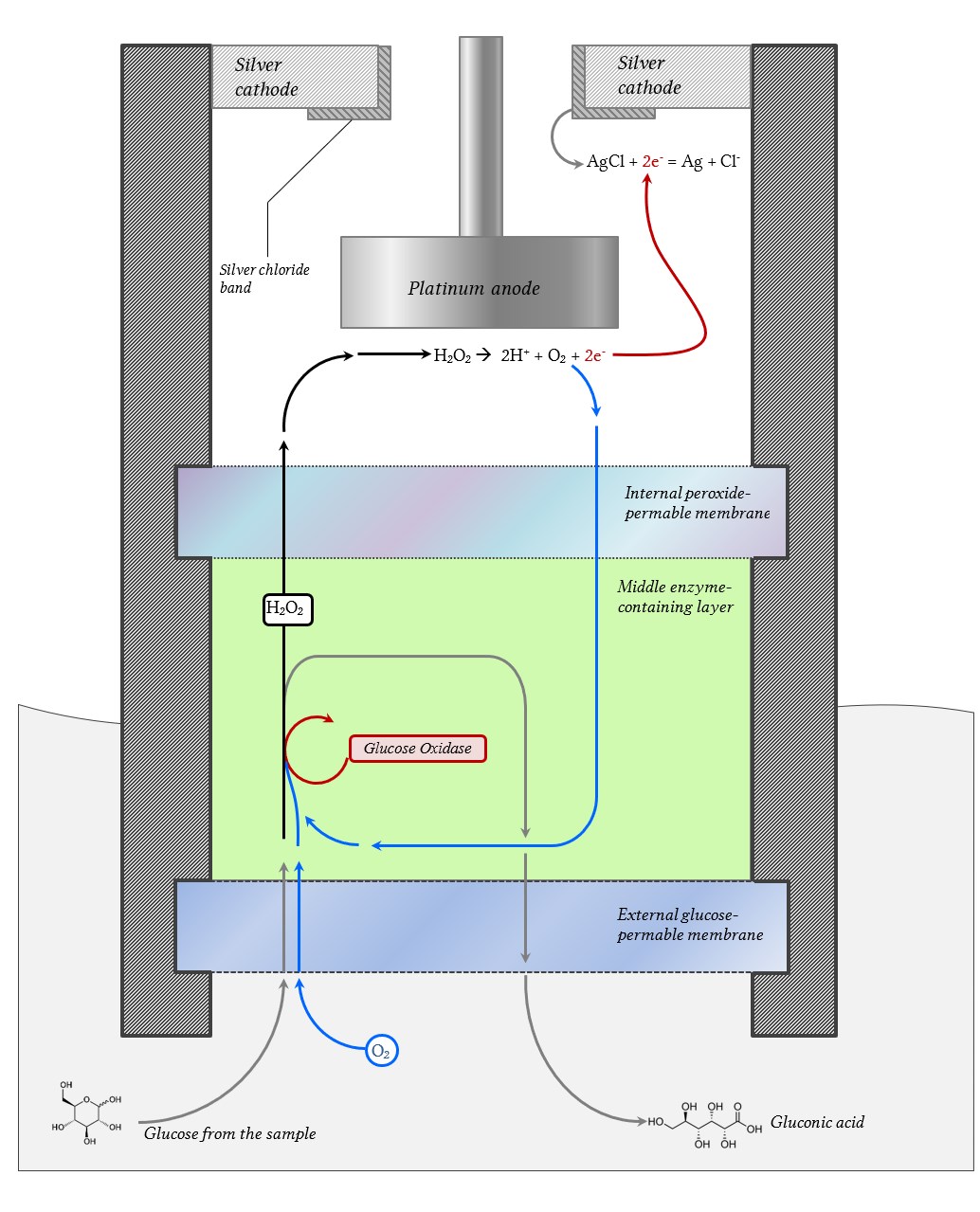 The system is subjected to a polarisation voltage of 675 mV.

The reaction of glucose oxidase and glucose generates gluconic acid, which can make its way out of the electrode reasonably easily, and hydrogen peroxide. The peroxide can certainly diffuse back into the sample just as easily as it can diffuse towards the platinum electrode; however its movement in the useful electrode-ward direction is supported by the concentration gradient, which is maintained by its continuous reduction at the anode. The reduction yields hydrogen (which diffuses away), electrons (essential to produce the current) and oxygen (which is required by the oxidation of glucose in the middle chamber). Thus, overall this system is an electrolytic cell which converts glucose into gluconic acid and hydrogen.

The need for oxygen in the middle chamber raises an interesting problem. A well-oxygenated sample will result in a more rapid rate of enzyme-catalysed reaction than a sample from a severely hypoxic individual. In reality, this rarely poses a practical problem ( the oxygen made available by peroxide reduction is enough), but theoretically, in a perfectly anoxic sample the reaction might never even start (there is not enough oxygen to produce any peroxide!)

Thus, a certain initial "investment" of oxygen is required, for the reaction to begin. This initial investment must be truly trivial, and the reaction in the middle chamber must be almost completely dependent on oxygen recycling from peroxide reduction. Simple stoichiometry demands that this must be the case. In a one-way reaction, at a normal-ish BSl of 5mmol/L the complete oxidation of glucose would require 5mmol of oxygen, which at a standard temperature and pressure equates to about 112ml. Recall that every gram of haemoglobin carries a maximum of about 1.39ml of oxygen. At 100% saturation, this would mean that you would have to funnel 80g of haemoglobin into the blood gas analyser, which for an ICU patient might be over a litre. Obviously, that would be insane. Fortunately for the patients,the microlitre sample required for ABG measurement suggests that at the most, only fractions of a microlitre of oxygen are available to kickstart the reaction, which corresponds to nanomoles.

The glucose electrode has a measuring range between 0 and 60mmol/L. That makes it more useful than the fingerprick point-of-care glucometers, which typically report a "HI" result whenever the BSL is above 30.

Garjonyte, R., and A. Malinauskas. "Amperometric glucose biosensor based on glucose oxidase immobilized in poly (o-phenylenediamine) layer."Sensors and Actuators B: Chemical 56.1 (1999): 85-92.