Starling, in 1896, published a paper on the absorption of fluids from the connective tissue spaces.

The basis of his work were a series of experiments injecting serum or saline solution into the hindlimb of a dog, to track the movement of extravascular fluid.

From his findings, Starling deduced that the capillaries and post-capillary venules behave as semi-permeable membranes absorbing fluid from the interstitial space. Thereafter, the true "classical model" of Starling's Principle finally took its modern form in the hands of Krogh, Landis and Turner (1931). 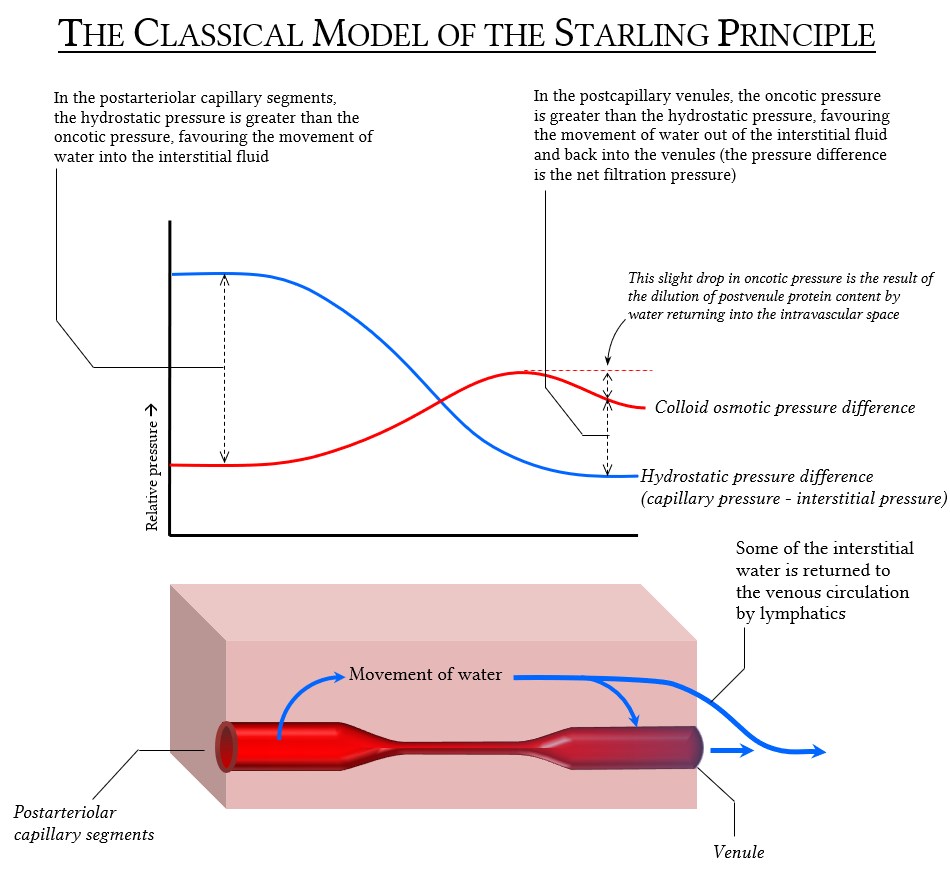 The basis of the classical model is expressed by the statement that transvascular fluid exchange depends on a balance between hydrostatic and oncotic pressure gradients.

At the arteriolar end of the capillary, the hydrostatic pressure gradient is a more powerful force than the oncotic pressure gradient. Oncotic pressure is defeated, and fluid is ultrafiltered into the interstitial space. In the postcapillary venules, the hydrostatic pressure is very low, and the oncotic forces become dominant, attracting some (but not all) of the ultrafiltered fluid back into the intravascular compartment. The remaining fluid relies on lymphatic drainage to mediate its return into the circulation.

In 2004, Adamson and colleagues revealed that the effect of Πis on transvascular fluid exchange is substantially less than what one might predict from the classical Starling model. This discovery had prompted a 2010 revision of the Staring model by Levick and Michel, which is the carefully considered subject of an excellent review article in the BJA.

In short, it is now well established that capillaries filter fluid into the interstitial space along their entire length, and not just at the arteriolar end. The expected reabsorption of interstitial fluid via venules simply does not occur; rather, the ultrafiltered fluid returns into the circulation as lymph.

The endothelial glycocalyx is thought to play the role of the semipermeable membrane in this new revised model. Stated simply, it is a 500-2000nm thick hydrogel-like layer of membrane-bound proteoglycans and glycoproteins, which lines the entire several-thousand-square-meter surface area of the human vascular tree. The gradients involved are not between the interstitial oncotic pressure (Πis) and intravascular oncotic pressure (Πc). Instead, the place of Πis is taken by Πsg, the oncotic pressure within a carefully protected sub-glycocalyceal space - a potential space between the glycocalyx and the vascular endothelium, which is completely free from protein, much of the time. The subglycocalyx may not remain completely protein-free over the entire length of the vessel. Indeed protein diffusion into this space underlies some of the mechanisms which maintain the net movement of fluid into the interstitial space. Increased "proteination" of this layer may diminish the oncotic pressure gradient, which decreases the opposition to hydrostatic filtration. In other words, if the subglycocalyx is "dehydrated" by some sort of transient phenomenon (eg. if the capillary pressure suddenly drops, resulting in the hydrostatic "autotransfusion" of water out of the interstitial space and glycocalyx) the drop in the oncotic pressure gradient maintains the net hydrostatic movement of water out of the capillaries. 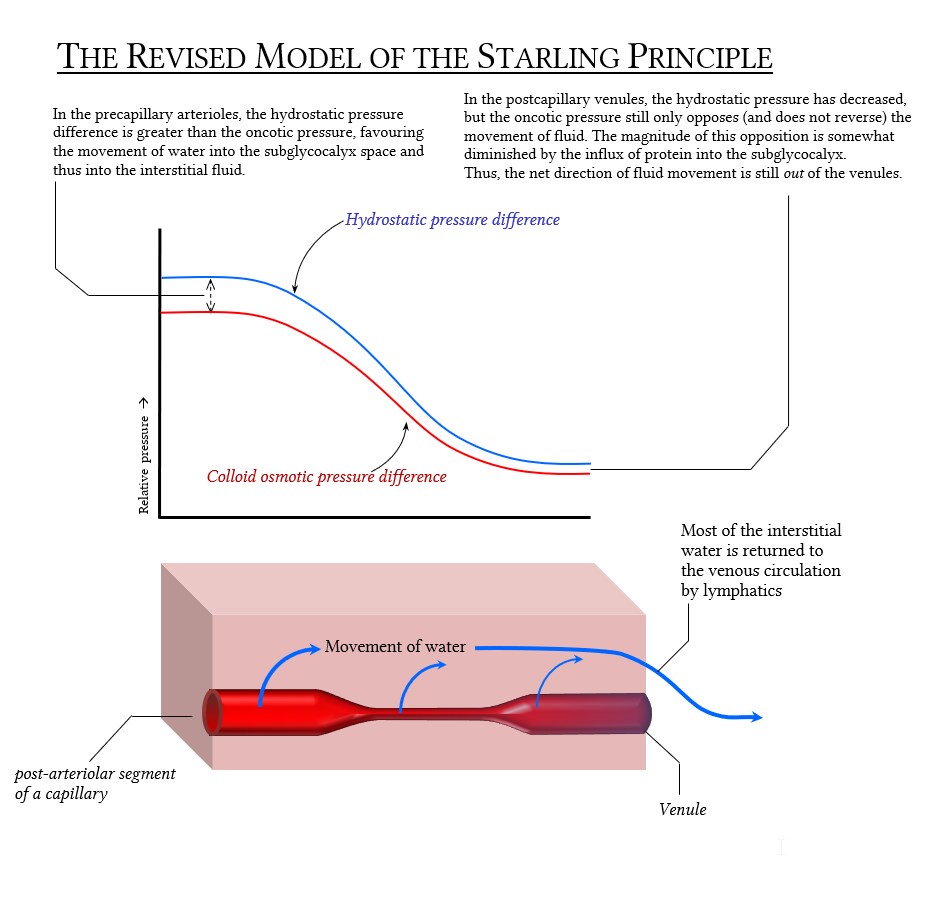 Thus, the oncotic pressure gradient between Πc and Πsg seems to oppose but not reverse the movement of fluid out of the capillaries. This is interesting. For one, it means that the old technique of "attracting" oedema fluid out of the interstitial compartment by intravenous albumin should not work.

This is consistent with the current data:

(It is now thought that the intravascular volume increase which occurs with the administration of hyperoncotic albumin is likely the result of water moving into the circulation out of the non-circulating glycocalyx, which contributes about 25% to the total intravascular volume).

These basic laws should not vary dramatically from textbook to textbook.