This chapter is relevant to Section G1(iv)  of the 2017 CICM Primary Syllabus, which asks the exam candidate to "describe the fetal circulation". By tracking this occurence of an Americanised spelling in an Australian professional document, one can suppose that, like many syllabus items, this was cut-and-pasted from the ANZCA Syllabus for the Basic Sciences. Incidentally, as a member of a Commonwealth country where etymological fallacies are viewed as a marker of cultured literary prestige, the author has chosen to keep his foetuses full of Oe.

The key to learning this subject would be to find an explanation which focuses on the reasons behind the structural and functional differences between adult and in-utero circulations. Without that rationale to stimulate their faculties, the trainee turns to mindlessly memorising the list of differences. This produces suboptimal trainees, but also answers the SAQs, i.e. either approach has merit. The author himself has understood and re-forgotten this topic on at least eight separate occasions, in spite of epic efforts to self-educate.

As far as peer-reviewed articles go, the best one would probably have to be the free BJA article by Murphy (2013), because it's short and to the point. Kiserud (2005) or Kiserud & Acharya (2004) might also be useful, depending on which links die first (in fact, anything by Torvid Kiserud seems to be gold). All of these authors have one flaw, which is the insistence on trying to represent the circulatory system with some semblance of anatomical accuracy. One could, however, make the arguments that CICM trainees are a) never going to operate on the unborn, and b) have a very function-oriented focus in the primary exams, which makes anatomy completely superfluous in this specific topic area. Therefore, a purely functional flowchart diagram is offered, to liberate the trainees from confusing tangles of poorly drawn greater vessels.

Structure of the foetal circulation

This diagram of the foetal circulation is an uncharacteristically austere version which should be reasonably easy to reproduce in an exam setting. 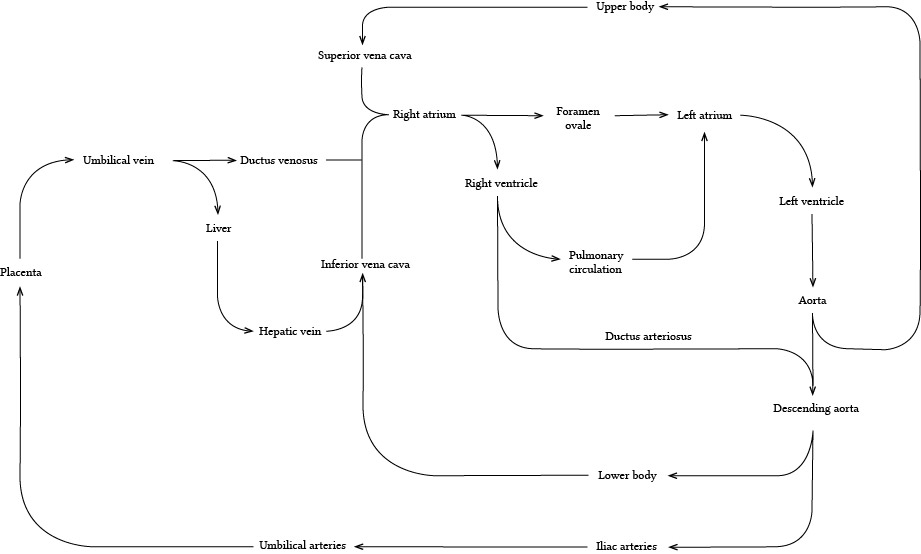 In summary, the path of blood flow is,

In case this information is ever of interest, MRI imaging has been able to measure the following flow rates in these vessels, (indexed to kilograms of body mass in the 37 week foetus): 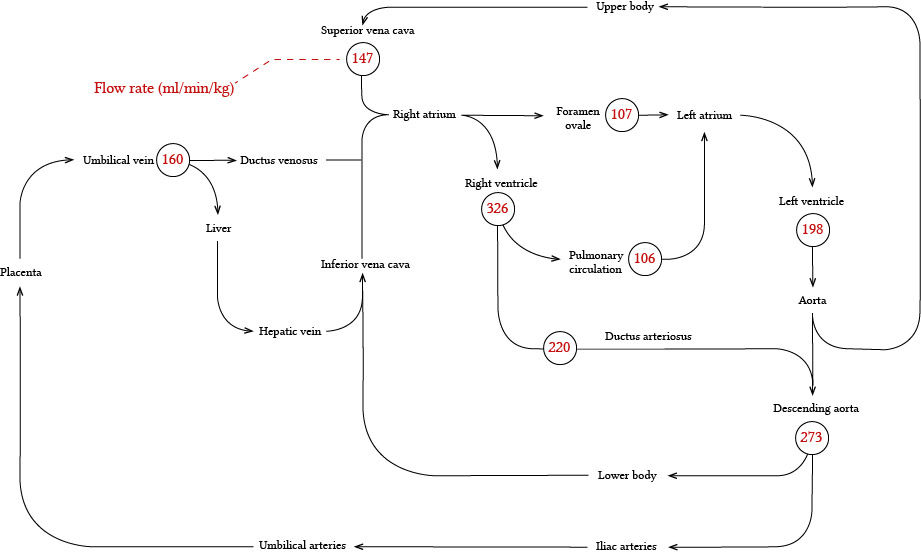 There are a few structures which the trainee should probably know a little bit about, because they are unique to prenatal life. These will be discussed in order of circulatory appearance:

Apart from being structurally quite unlike the adult system, the foetal circulation has enough functional weirdness to fill an extensive list:

Though these differences have never been a topic of an SAQ (none of this has), they are a ripe low-hanging fruit for an easily graded question, where a tabulated answer is expected.  Where possible, the oxygenation values and other numbers came from the Murphy article.

Castle, B., and I. Z. Mackenzie. "In vivo observations on intravascular blood pressure in the fetus during mid-pregnancy." Fetal physiological measurements. Butterworth-Heinemann, 1986. 65-69.

Spurway, Jacqueline, Patricia Logan, and Sokcheon Pak. "The development, structure and blood flow within the umbilical cord with particular reference to the venous system." Australasian journal of ultrasound in medicine 15.3 (2012): 97-102.