This chapter is relevant to Section G2(ii)  of the 2017 CICM Primary Syllabus, which asks the exam candidate to "describe the normal and abnormal processes of cardiac excitation and electrical activity". Almost all the SAQs on this topic ask for a comparison between the action potentials of a normal cardiac myocyte and a specialised pacemaker cell, and so this chapter should probably be considered together with the chapter on the action potentials of pacemaker cells. Multiple past paper questions have interrogated this topic:

As always, the exam candidate who is not inclined to have any more of their time wasted will benefit from looking at the excellent summary of this topic at Part One. The official college textbook (Pappano & Weir) also has an entire chapter on the cardiac action potential (p.11-29 of the tenth edition), and if you happen to own it, that would be enough. For a comprehensive overview with some solid peer-review credentials, a chapter in Comprehensive Human Physiology (Antoni 1996) is somehow available for free from the Medicinska fakulteta v Mariboru. This chapter alone should be enough to surpass most people's needs for ion channel physiology, but if it still somehow does not, one can submerge deep into Grunnett (2010) which has the most detailed explanation of the ion channels of any single article.

All discussions of the cardiac action potential start with something like this: 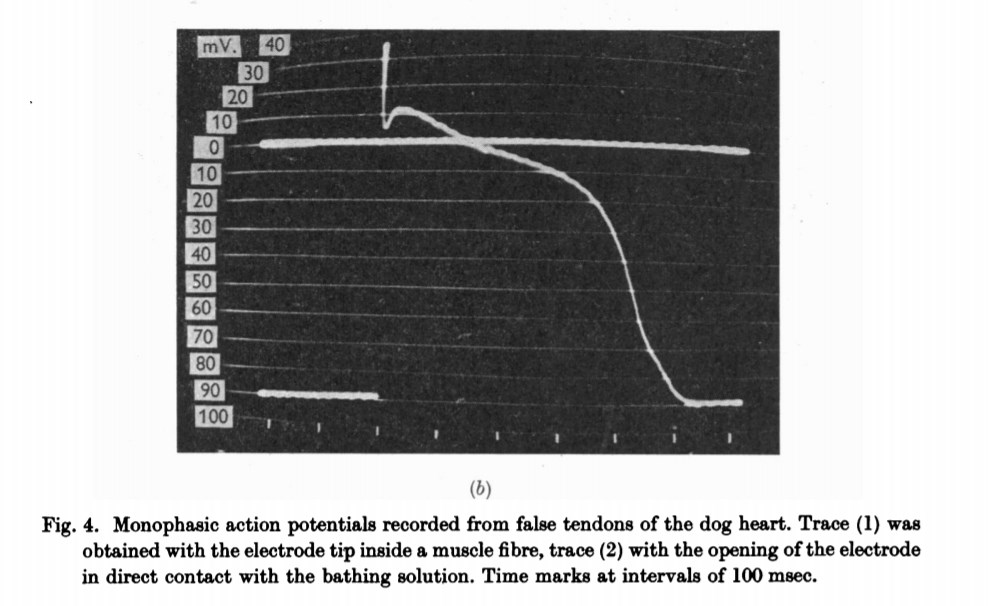 This famous diagram, or at least this specific version of it, comes from a 1951 study by Draper & Weidmann. As far as one can tell, this was the first recording of the cardiac myocyte action potential, measured using an oscilloscope from a selection of sliced-up dog ventricles (specifically, false tendons were used). The original apparatus is lovingly depicted in the excellent hand-drawn diagram below: 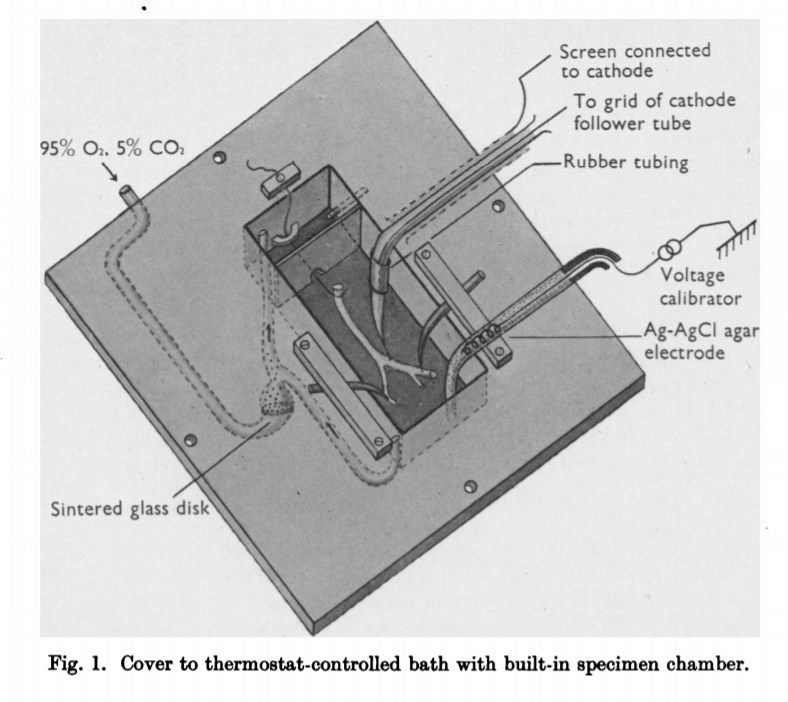 Let's go through these phases in detail.

Phase 4 of the cardiac action potential

Phase 4, or the resting membrane potential, is a quiescent period during which the cardiac myocyte waits for a depolarising signal in a state of silent readiness. During this period, the potential difference across the membrane sits at approximately −90 mV. 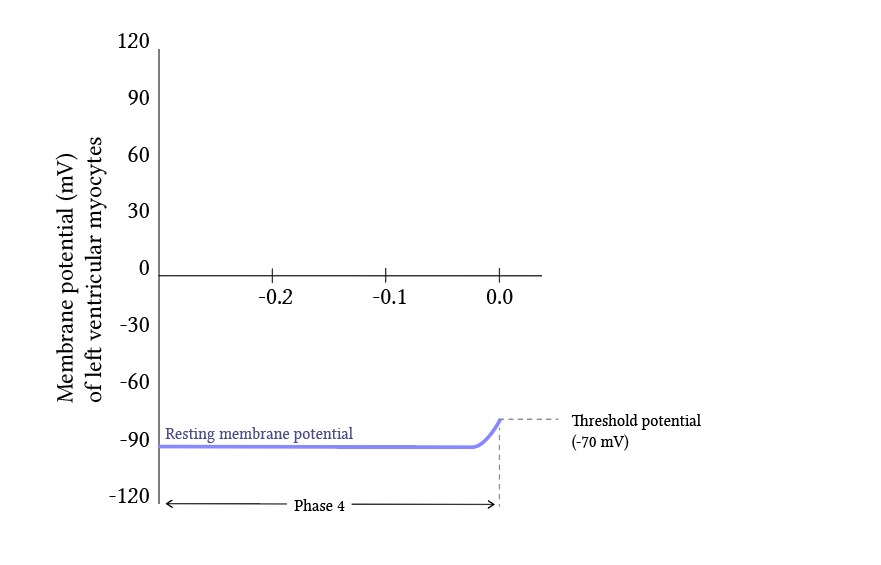 In other words, the inside and the outside of a myocyte have a different electrical charge, with the inside negative relative to the outside. The magnitude of this difference is about 90 mV.

This resting potential is maintained by multiple factors, which are discussed in what some might call excessive detail in another chapter. It will suffice to say that in the cardiac myocyte, this potential difference is mainly produced by the good potassium permeability of the cell membrane, and is close to the Nernst potential to potassium ( the transmembrane potential difference generated when that ion is at electrochemical equilibrium). That permeability is maintained by the inward rectifying potassium channel.

This channel is the Kir inward rectifying potassium channel, and the flow of potassium cations through it is the Ik1 inward rectifying potassium current. There is in fact an entire family of Kir channels, and the myocardium appears to express several subtypes which are responsible for some of its spontaneous excitability and arrhythmogenesis (Dhamoon & Jalife, 2005). The term "inward rectifying"  means "preferring an inward flow of positive charge". A rectifying current preferentially allows current in one direction, as its conductance changes with the transmembrane voltage. The Kir channels, as an example, allow potassium ions to pass out of the cell at very low voltages (around -90 mV), but are basically impermeable to potassium at more positive voltages. Observe this diagram, borrowed from the above-referenced authors: 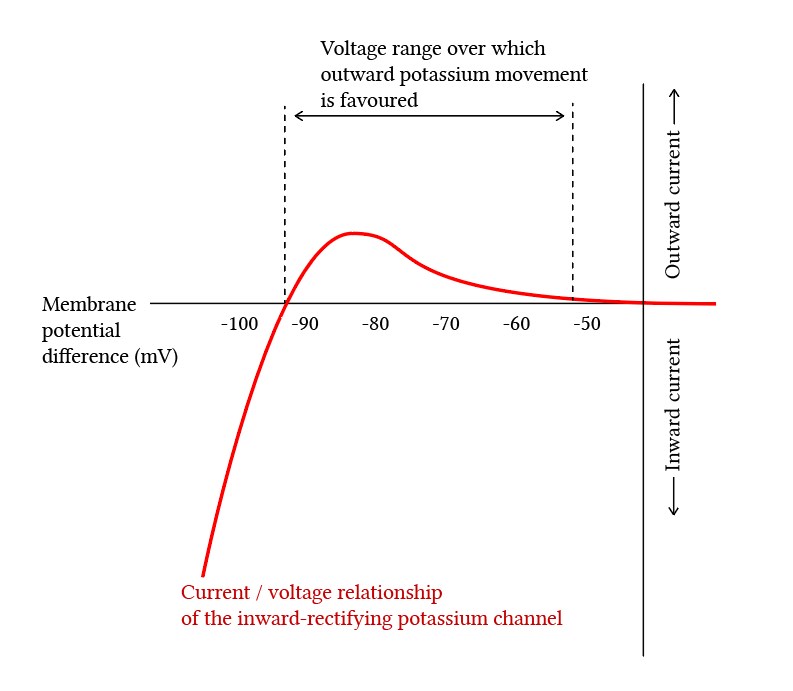 So, the outward potassium current drags positive charge out of the cell (because potassium escapes by following its electrochemical gradient) until the membrane potential exceeds the -90 mV threshold, and then the potassium current turns inward, keeping the potential from becoming more negative. The main upshot of this is that the  Ik1 current produced by Kir channels has a stabilizing effect on the resting membrane potential, keeping it at around -90mV.

This exact -90mV value seems to have propagated through multiple textbooks, and it is not clear which experiment it originates from, or which original literature reference contains it. It is obviously something which will depend considerably on the extracellular potassium concentration because this determines the magnitude of the driving chemical gradient. In short, the less extracellular potassium there is, the more the intracellular potassium wants to exit the cell, and the greater the magnitude of the transmembrane potential difference generated thereby.  The following table is from Baczkó et al (2003), who submerged isolated myocytes in different concentrations of potassium and measured their resting potentials:

As you can see, by extrapolating from these data one arrives at a resting membrane potential of around -90 mV at a normal-ish extracellular potassium concentration of around 4.0 mmol/L.

Anyway. Phase 4 is potentially the longest phase of the action potential, as it basically lasts until the myocyte is ambushed by an action potential propagating from another cell. At that stage Phase 0 begins. This happens when the membrane potential reaches the depolarisation threshold, which for cardiac myocytes is about -70 mV (again a value which appears in many textbooks but which has no clear source).

Phase 0 of the cardiac action potential

Phase 0 is the phase of rapid depolarisation, during which the membrane potential changes from -90 mV to +50 mV. This happens very quickly: the rate of change is said to be about 250 V/sec, i.e the change occurs over about 0.5 msec. 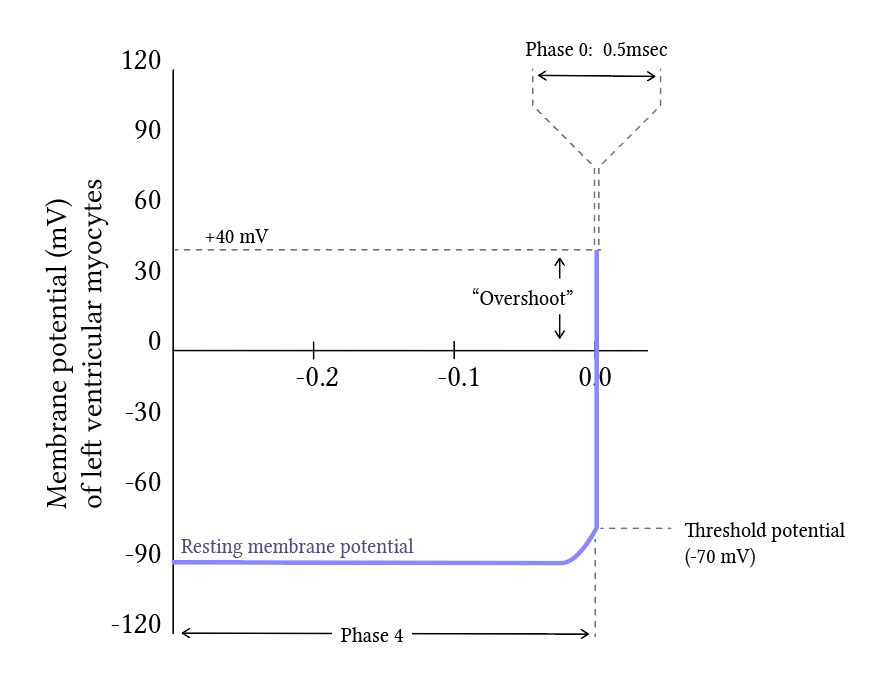 This rapid change in membrane potential is due to the opening of fast voltage-gated sodium channels. Carmeliet & Vereecke (1969) demonstrated this with an elegant study where pufferfish venom (tetrodotoxin) was used to block and disable those channels. As you can see, the height of the Phase 0 spike is much lower with increasing tetrodotoxin concentrations: 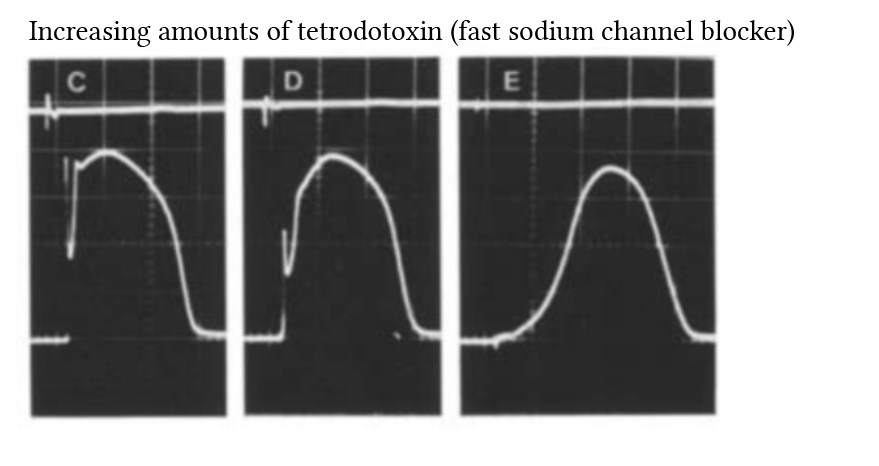 The hump-like depolarisation which is left behind after all the sodium channels are blocked is due to the L-type calcium channels which also open during Phase 0, apparently at a threshold of around -30 mV (Grunnett, 2010).

The inrush of sodium which occurs in Phase 1 is driven mainly by the chemical gradient, which is very strong because sodium is virtually absent from the intracellular environment. Deshpa et al (2002) measured intracellular sodium concentrations of around 9mmol/L in working myocytes, which decrease to around 6mmol/L in heart failure, presumably to attract more sodium into the cell during depolarisation so it can be used to facilitate a larger calcium influx.

The membrane depolarisation does not stop at 0 mV, and keeps rising until the maximum potential difference is transiently much more positive. The magnitude of this transient positive potential seems to be a source of disagreement among textbooks. Santana (2010) gives a value of +50 mV, for example, whereas Antoni (1996) gives something like +30 mV; Pappano & Weir give +20 mV. In terms of real published data, Mary-Rabine et al (1979) had measured a maximum positive potential of around + 40 mV in canine Purkinje fibres. The term "overshoot" is used to refer to this positive potential, which is of course absurd, because it implies that the cardiac myocyte is somehow aiming for 0 mV, and just keeps missing it by a comically wide margin.

Anyway. In summary, the ionic events during Phase 0 are:

Those fast voltage-gated sodium channels are a part of a large family, and are ubiquitous in essentially everything that has any sort of nervous system or excitable tissue, starting with jellyfish. They are present on the surface of myocytes in truly vast quantities (Makielski et al counted around 100,000 per cell) and are therefore able to mediate a massive rapid flux of ions. The specific variety seen in the mammalian heart is the Nav1.5 isoform (Zimmer et al, 2014). A special featue of these channels is their "refractoryness": once they have opened and shut, they will not open again until the membrane has depolarised to at least -40 mV (Antoni, 1996).

Phase 1 of the cardiac action potential

Phase 1 is characterized by a brief initial repolarisation which occurs as the voltage-gated sodium channels close. It is also called the "notch". The action potential is said to approach zero during this period, but some authors (Santana et al, 2010) mention that the membrane potential bottoms out at +30 mV. The exact duration of this phase is not clear and nobody has ever defined its precise boundaries in the literature, a fact which somewhat degrades the credibility of the following diagram: 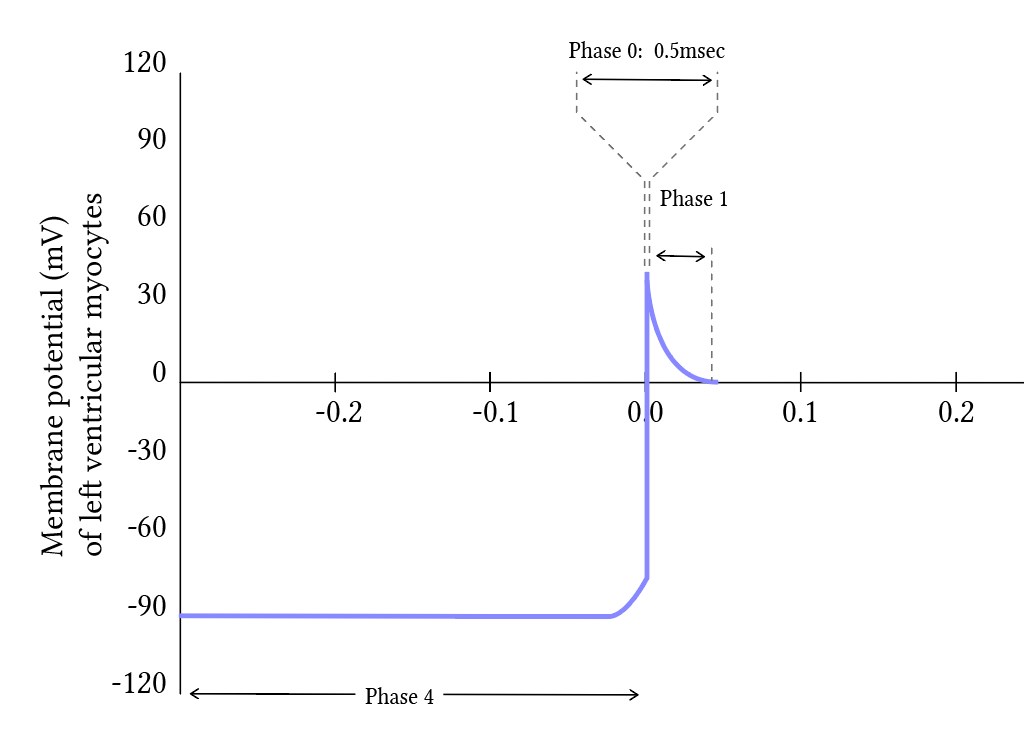 In summary, the ionic events during this phase are:

The Ito current is a potassium current which exists only for a brief period following depolarisation, and which allows potassium ions to leave the cell. Logically, ont he basis of these characteristics they have named it the "transient outward" current, which is where the "to" in Ito comes from. This current is medicated by tetrameric Kv family of ion channels, where "v" stands for "voltage gated". These channels produce a drop in membrane potential while they remain open, but they tend to close almost immediately by  (Oudit et al, 2001).

Phase 2 of the cardiac action potential

This is the phase during which the membane potential remains relatively stable, and near to 0 mV. It is the main feature which distinguishes the cardiac action potential from the neuronal action potential, which does not have this long plateau. 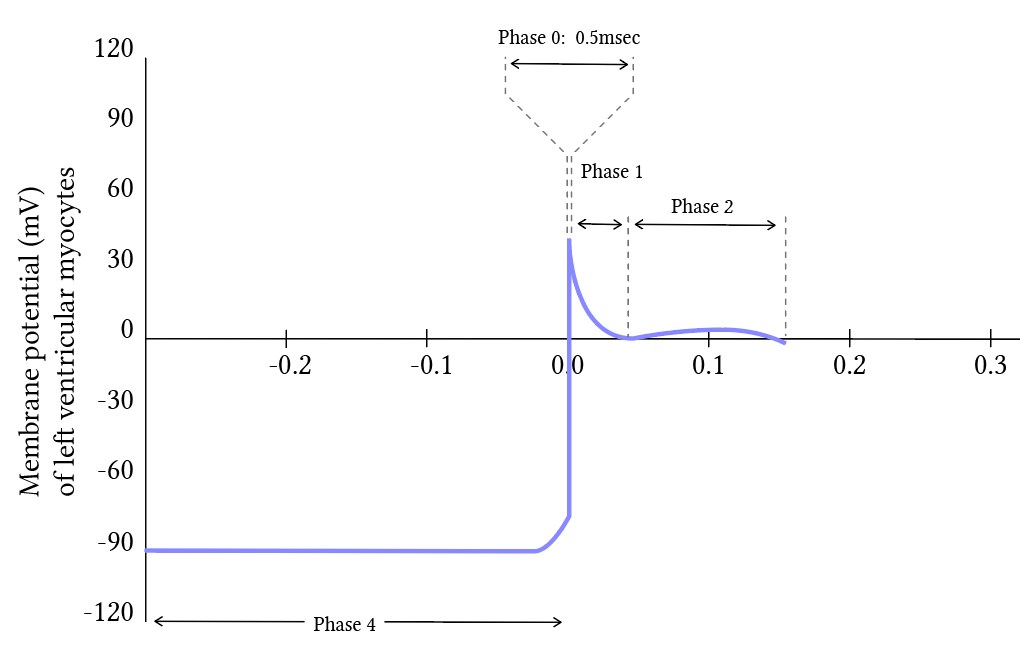 The most important ionic transaction which takes place during this period is the inward flow of calcium through L-type and T-type calcium channels.  Nilius et al (1986) described and named these according to thier function:

These are types of voltage-gated channels which open at -50 mV (T-type) and at -30 mV ( L-type). The L-type channels open slowly, over hundreds of milliseconds, and they are probably responsible for the hump of depolarisation which is left behind when the sodium channels were blocked in the above-described tetrodotoxin experiments.

Thus, during Phase 2, there is a significant entry of extracellular calcium into the myocyte. This, in turn, produces even more intracellular calcium release from the sarcoplasmic reticulum, mediated by the calcium-sensitive ryanodine receptors. The overall effect is a dramatic increase in intracellular calcium, which is good because you need that calcium to contract with.  This calcium also serves to inactivate L-type calcium channels, which brings Phase 2 to an end.

Phase 3 of the cardiac action potential

The slow repolarisation of the cardiac myocyte membrane occurs when the calcium channels close, and potassium channels open.

Three potassium currents are responsible for this process:

To spare the reader a dreary digression into the molecular specifics of these currents, it will suffice to say that these three channels have essentially overlapping functions. They all remain closed at very negative (resting) membrane potentials and at very positive (early depolarised) membrane potentials, which means they can really only remain open from the end of Phase 2 to the end of Phase 3. In other words, they repolarise the membrane and close once they have done their job (except Kir). The opening kinetics of these channels are best described by this diagram from Grunnett (2010):

Thus, the Phase 3 repolarising potassium currents stop flowing once the membrane potential is well and truly in the territory of the Kir inward rectifying channel, which then maintains Phase 4 at the resting membrane potential by remaining open and conducting some minimal amount of potassium.