This chapter is relevant to Section G2(ii)  of the 2017 CICM Primary Syllabus, which asks the exam candidate to "describe the normal and abnormal processes of cardiac excitation and electrical activity". "Abnormal" is the keyword here; normal mechanisms having been dealt with in another chapter. "Abnormal processes of cardiac excitation and electrical activity" in this setting basically means "cardiac cells depolarising when they ought to stay polarised", i.e. action potentials occurring at times and in places where they were not expected to arise through normal cardiac conduction. This refers to all sorts of ectopic pacemakers and foci of arrhythmia, as well as to the conditions which lead to their appearance. The subject can be divided into two main categories: abnormal automaticity (where excitable cells develop a lamentable excess of initiative) and triggered activity (where formerly well-behaved cells are depolarised abnormally by the errant action potential of some nearby firebrand agitator).

To enhance this resource with some borrowed credibility, the author leaned heavily on Antzelevitch & Burashnikov (2011), as it is probably the single most valuable free peer-reviewed paper on this subject. Cranefield (1977) is also good, outdated but still interesting because the article lays out the history of research on the topic in a logical way which promotes understanding.

There are pacemaker cells throughout the cardiac conduction system, and they are all capable of depolarising spontaneously, but they are usually overdrive-suppressed by the sinoatrial node and remain well behaved. Normal working cardiac myocytes should not ever depolarise randomly on their own, but being excitable tissues they are still capable of it. Reduction in potassium conductance and partial depolarisation is the common pathway of all such abnormal automatic activity. This can happen as a result of several stimuli:

Sustained direct current: also known by the archaic term "catelectrotonus", the application of direct current can increase the automaticity of formerly quiescent pacemakers and even stable working myocardial muscle cells. Hohnloser et al (1982), working with a bunch of disembodied guinea pig hearts, found they could induce rhythmic depolarisation by increasing the current. Beyond a certain magnitude of current, normal QRS complexes disappeared, and the cathode recorded broad complexes originating from the muscle fibres themselves:

Hypokalemia causes both increased automaticity and increased predisposition to early afterdepolarisations. Mario Vassalle (1965) found that automaticity of isolated sheep Purkinje fires increased with hypokalemia, to the point where there was reliable spontaneous depolarisation at extracellular potassium concentrations below 2.7 mmol/L. The membrane potential recordings revealed something very weird: the resting membrane potential in Phase 4 underwent some sort of strange oscillation, which gradually became stronger until depolarisation threshold was reached. These "oscillatory prepotentials" increased in their amplitude with decreasing extracellular potassium until "eventually action potentials appeared in regular sequence". A ten-second strip from Vassalle's original oscilloscope recordings demonstrates this phenomenon nicely:

The mechanism behind this is probably poorly understood, insofar as none of the published material seems to have any good explanation of how this works at an ionic level. Odsachii (2010) mentions this phenomenon, but comments only that "reduced outward potassium conductance" is at fault without going into much detail.

Barium ions induces spontaneous electrical activity in previously non-automatic myocardial cells. How random, one might say. Why do we know this, and why would we need to? According to Mugell et al (1983), barium ions are a well-known means of artificially increasing the automaticity of all sorts of excitable tissues, and have been used for these sorts of experiments since Vladislav Kruta demonstrated it in barium-soaked coeurs de lapins et du chats in 1934.  Barium seems to exert this effect by increasing the resting potential of the cell up towards zero, as can be seen in this lightly altered recording from the Mugell paper: 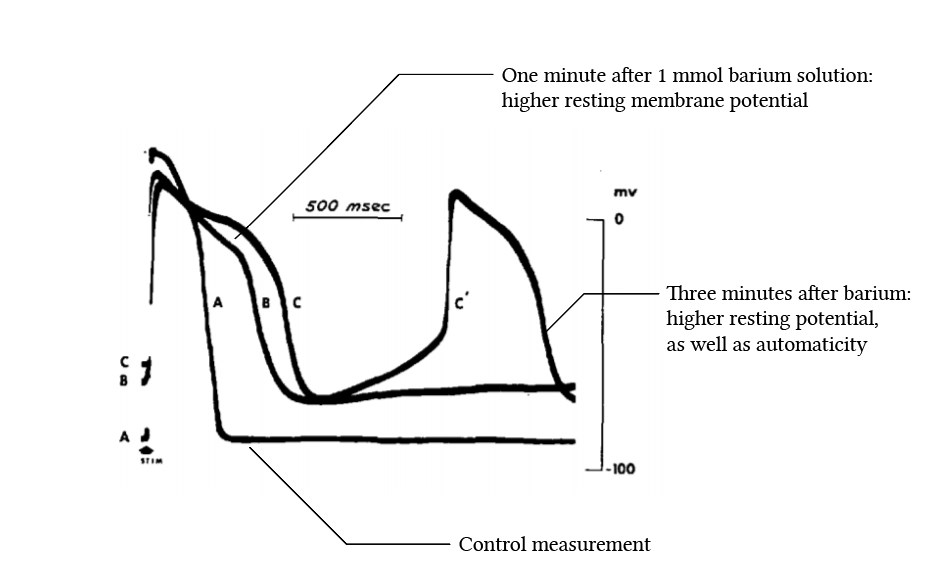 It's hard to argue with what happens here, but why it happens remains the topic of debate. "The mechanism for the genesis of the barium-induced pacemaker activity is obscure", concluded Mugell et al. Apparently, everything is due to the blockade of the potassium selectivity filter region by barium ions, which results in blockade of the potassium conducting pore on the affected channels. "Barium is a potent, non-specific inhibitor of the potassium IRC current and affects all types of muscle at micromolar concentrations", concludes a review of acute human barium toxicity (Bhoelan et al, 2014).  The enraged reader would, of course, be correct in their assumption that having this knowledge is only of use for the purposes of passing CICM primary exams, the community prevalence of acute barium intoxication being thankfully low. Barium compounds (rodenticides, fungicides, shaving powder) have yielded the market to safer alternatives, and modern exposure cases are represented only by random acts of weirdness (eg. where a 35-year-old male with intellectual disability ate a packet of Chinese fireworks).

Mechanical stretching of the myocardial cells can also give rise to enhanced automaticity. Franz et al (1992) mounted rabbit hearts on a compter-controlled syringe servopump and demonstrated that an acute increase in LV volume can give rise to ventricular ectopic beats. The investigators recorded the membrane potential as the pump gave brief pulses of increased volume into the LV:

As you can see, each volume pulse caused a brief depolarisation of the membrane. As the magnitude of the mechanical stretch increased, so did the magnitude of the depolarisation, until it reached the depolarisation threshold of the myocytes. At sufficiently high volumes, the myocytes were being "paced" by the volume pulses, so consistent was the effect. A sustained stretch also increased the automaticity of the fibres, which has direct clinical implications for the dilated atrium of a patient in heart failure, as it gives rise to atrial flutter and fibrillation.

As one might be able to reconstruct from their name, these depolarisations occur early after another depolarisation, in the repolarisation phase. They are not necessarily automatic - in fact, they normally require some sort of trigger, eg. another action potential coming soon after the first.  Delayed repolarisation is the main predisposing factor to promote this sort of thing, as it increases the duration of the vulnerable early refractory period. There are several common reasons for delayed repolarisation:

Hypokalemia is a major cause of early afterdepolarisations, and this is mainly because it produces a prolonged repolarisation phase. The main electrochemical finding in Vassale (1965) was a delayed repolarisation: the cells took their sweet time in Phase 3.  This original oscilloscope recording from the Vassale paper has been labelled with relevant extracellular potassium concentrations: 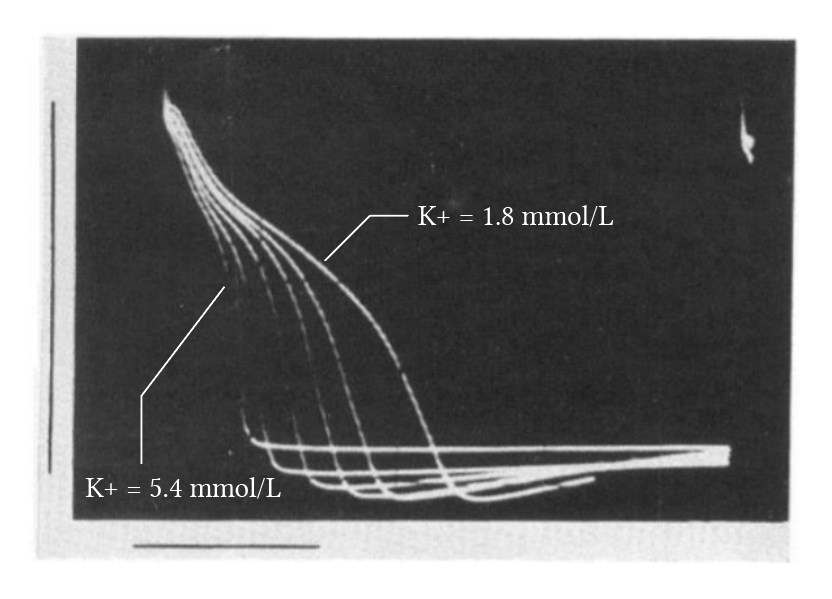 This probably happens because of the hypokalemia-induced inactivation of the potassium rectifying currents in Phase 3. Sure, that sounds strange, as one might expect extracellular hypokalemia would increase the chemical gradient for outward potassium flow, thereby enhancing the current, but in reality the reverse happens. According to Weiss et al (2017), the potassium channels active in Phase 3 exhibit a strong allosteric dependence on extracellular potassium concentration. Normally, extracellular potassium destabilises the channel pore by removing intracellular cations (magnesium ions and polyamines) which normally block the intracellular end of the channel. Without potassium keeping the pore open, these cations continue to stabilise the pore, which loses its potassium conductivity, and the potassium current decreases, slowing repolarisation.

Class 3 antiarrhythmics prolong the action potential duration by interfering with rectifying potassium channels. This effect is also seen with quinidine, which - even though it is classified as a Class Ia agent- also blocks the inward rectifying potassium current. Roden & Hoffman (1985) were able to record these hideously prolonged action potentials in quinidine-soaked dog Purkinje fibres:

This will also be seen with just about any drugs which prolong the QT interval (which correlates to Phase 3 of depolarisation on the surface ECG).

Hypoxia on its own does not seem to cause a prolongation of repolarisation unless it is in the presence of catecholamines. Gaur et al (2009) determined that the added entry of intracellular calcium mediated by β-adrenergic receptors is a necessary precondition; fibres which were merely hypoxic did not seem to have any major abnormality in their action potential duration.

Acidosis also prolongs the repolarisation of myocytes. Rozanski & Witt (1991) submerged some rabbit Purkinje fibres in a bath designed to imitate severe lactic acidosis (pH of 6.7) and found that the action potential duration was prolonged significantly, with over 80% of the tested fibres demonstrating triggered early afterdepolarisations. The authors did not elaborate on what they thought might have been the molecular mechanism of this phenomenon, only to say that they "may involve alterations in Ca2+ binding to sarcolemmal phospholipids and proteins". In case you are wondering, the acidotic fibres regained their composure after about 45 minutes at a normal pH.

Catecholamines play a role in the development of early afterdepolarisations in a way which seems somewhat separate from the prolongation of Phase 3. In experiments by Priori et al (1990), isoprenaline at low concentrations produced a prolonged action potential, but in high concentrations actually shortened it. The increased predisposition to early afterdepolarisations seen in the latter scenario was abolished by calcium channel blockers, suggesting that calcium influx into cells was an important factor (January et a, 1988). Among the things they do, catecholamines increase the intracellular availability of calcium by cAMP-mediated mechanisms, so this makes some sense.

The clinical relevance of early afterdepolarisations is therefore:

Again, as the name suggests, these afterdepolarisations happen late in the process of repolarisation. By definition, they occur after the cell has reached its resting membrane potential, but before the next "proper" action potential.

"A delayed afterdepolarization, by definition, occurs after repolarization is complete, i.e., after the membrane potential has returned to the level seen before the action potential."

When one sees this in the literature, they are usually depicted as oscillations of the membrane potential which occur following some normal action potentials, occasionally translating into a "real" action potential. For example, there is a frequently reproduced series demonstrated by  Ferrier & Moe (1973) in some dog muscle, which seems to be re-drawn for every cardiovascular physiology textbook. The images from the original paper scanned (or printed) so poorly that one might think to reproduce the originals would fail even the low standards of Deranged Physiology. But here we are: 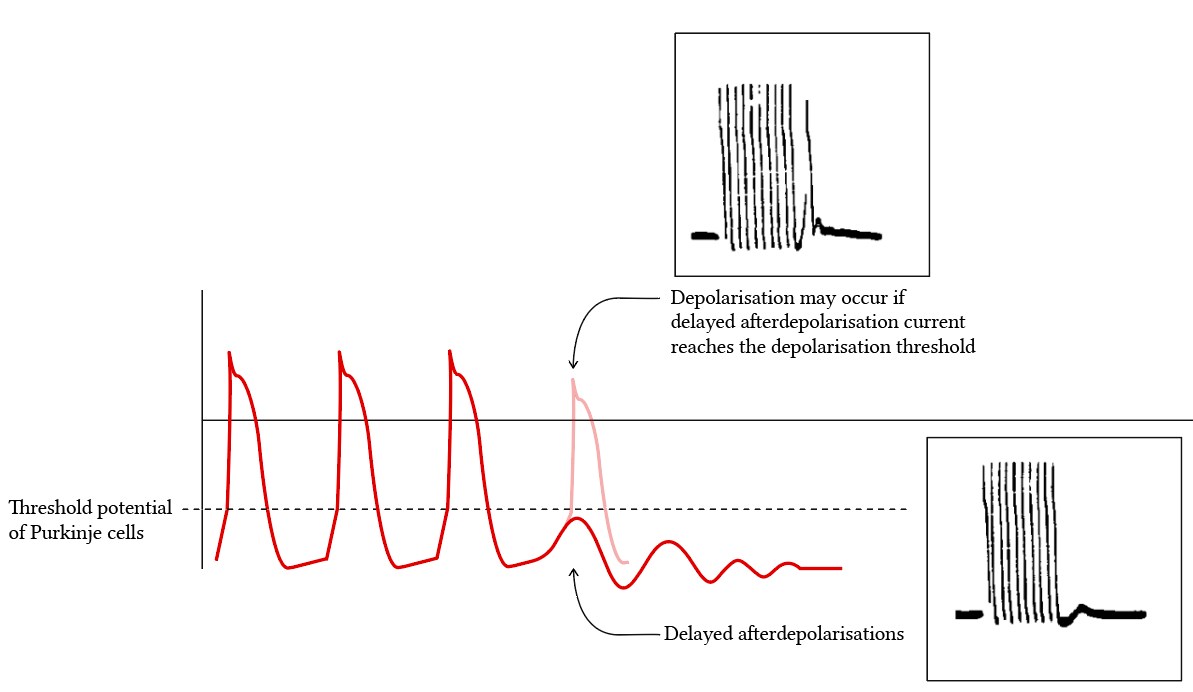 The magnitude of these oscillations following depolarisation appears to depend considerably on the availability of intracellular calcium.  Delayed afterdepolarisations were inhibited by hypocalcemia and enhanced by hypercalcemia, in the aforementioned study by Ferrier & Moe. They are also enhanced by other factors which lead to increased intracellular calcium content; for instance, an increased heart rate (even when paced). Here are some more examples from another old Ferrier paper (1973), with the fibres paced at different rates. As pacing rate increases, so do the Phase 4 oscillations, until several afterdepolarisations are produced:

The authors were also able to demonstrate the same effect with the addition of acetylstrophanthidin, which is basically like digoxin with an extremely short-lived clinical effect. The mechanism behind this is again calcium - cardiac glycosides tend to increase intracellular calcium by inhibiting Na+/K+ ATPase - this increases intracellular sodium, which in turn acts a substrate for the sodium-calcium exchanger active in Phase 1.

Thus, in summary, all things which lead to increased intracellular calcium will give rise to delayed afterdepolarisations, including:

The clinical relevance of delayed afterdepolarisations is therefore:

Hohnloser, S., J. Weirich, and H. Antoni. "Influence of direct current on the electrical activity of the heart and on its susceptibility to ventricular fibrillation." Basic research in cardiology 77.3 (1982): 237-249.