This chapter is relevant to Section G3(i)  of the 2017 CICM Primary Syllabus, which asks the exam candidate to "explain the Frank-Starling mechanism and its relationship to excitation-contraction coupling". Remarkably, the college examiners have never attempted to directly weaponise this section of the syllabus, though it does appear as shrapnel in the casing of other questions. This is mainly surprising because the subject matter is fundamental to cardiovascular physiology, and because there is a diagram which makes for easy question-writing (just ask them to draw and label it).

For the effects of pathophysiology on the Frank-Starling relationship, the best free offering is Jacob et al (1992), which is comprehensive and contains lovely diagrams. Mann's chapter from Data Interpretation in Anaesthesia is also excellent as it is presented in a question and answer format, like a viva station. In case one is unwilling to part with this subject after these twenty pages of text and references, one's weird needs will be satisfied by Keurs & Noble (1988), an entire 150-page book on the length-tension relationship. There is also a series of about ten articles titled "Studies on Starling's law of the heart", published in Circulation between 1960 and 1964, which contains even more permutations on this theme (i.e. every possible combination of cardiac variable and valve pathology you could think of). It would be pointless (also, probably harmful) to actually consume all of this literature in the course of exam preparation, and it is being left here for a purely decorative purpose, like a bowl of plastic fruit.

It is probably misnamed, as neither Ernest Frank nor Otto Frank discovered this thing. It was probably first noted either thirty or sixty years earlier. Apparently, in 1866 Elias Cyon first noticed it in the frog heart he was molesting, but he didn't write anything down and so it didn't happen. Similarly, Bowditch in the 1830s made recordings of the phenomenon, and though he noticed  certain Eigentümlichkeiten in the way the ventricle handled volume, he didn't think to mention it in his paper.

Anyway. Starling's first descriptions of this phenomenon ran to the verbose. In 1920, he wrote:

The greater the length of the fibre and therefore the greater amount of the surface of its longitudinal contracule elements at the moment when it begins to contraxct, the greater will be the energy in the form of contractile stress set up in its contraction, and the more extensive wull be the chemical changes involved. This relation between the length of the heart fibre and the power of contraction I have called "the law of the heart".

The editor of the Journal of Physiology clearly made Starling and Visscher (1926) cut it down to a more easily digestible form, which resembles the modern version:

"the larger the diastolic volume of the heart ...the greater is the energy of its contraction."

There are, unfortunately, as many modern versions as there are writers in the field of physiology; but at least they only vary the wording slightly.  "Diastolic volume" is occasionally substituted with another term like "preload", "pressure", "sarcomere stretch, "length",  etc,  and  "energy of contraction" is occasionally substituted with "force", "strength", "tension", or something more easily measured like cardiac output or stroke volume. No group of authors has given any evidence that any specific choice of language matters, which means that you can literally plot them in a grid and pick any combination of terms at random:

In any case, it all boils down to the relationship between cardiac filling and cardiac contraction. The Frank-Starling law is the observation that cardiac input and cardiac output are matched; it is a description of an intrinsic cardiac autoregulatory mechanism. It is a fundamental and ancient property of the myocardium; all vertebrate hearts and probably also insect hearts possess this ability, which probably makes it an essential engineering specification for building any circulatory system.

In an exam scenario, the unprepared trainee who is confronted with a question like "define the Frank-Starling law" should immediately grab a piece of paper and scribble this diagram: 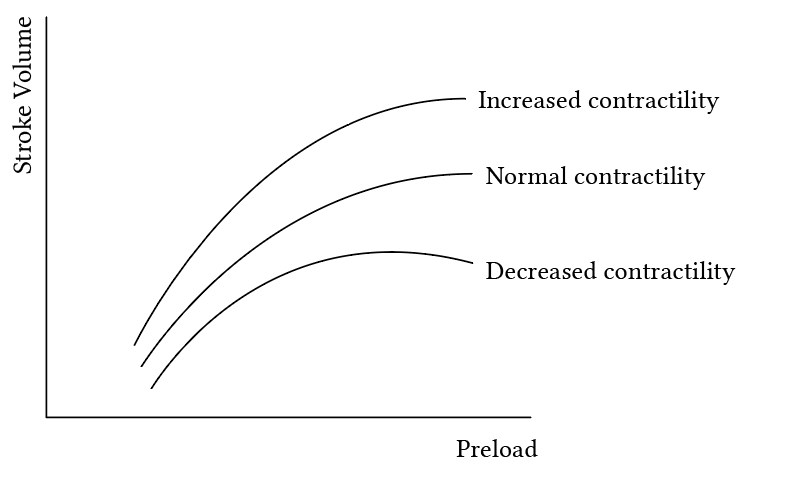 It is a stripped-down version of a graph published by Sarnoff & Berglund in 1954, where the contractility of the dog heart was controlled by means of ischaemia (they basically clamped the coronary arteries): 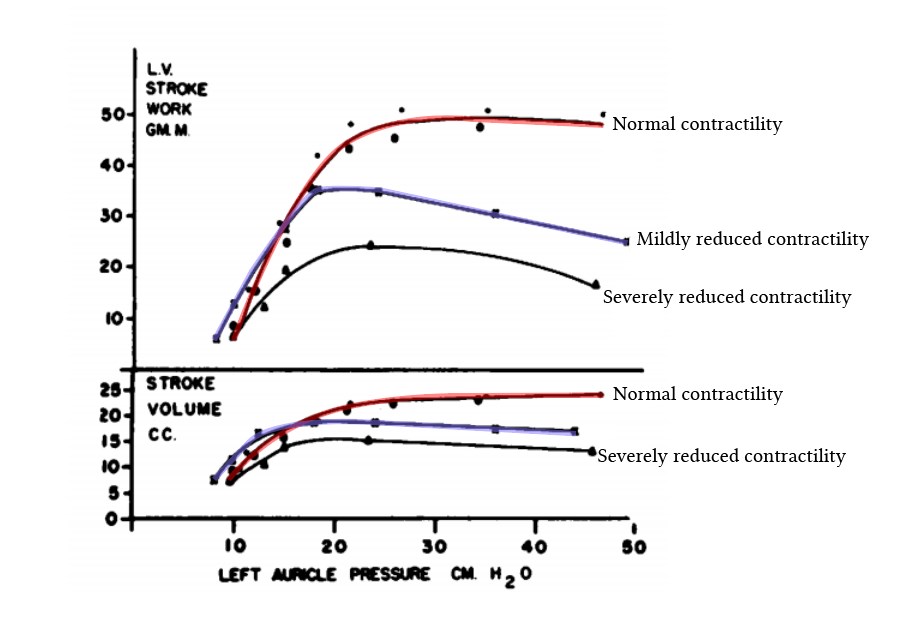 These are "ventricular function curves" and are discussed elsewhere. Here it will suffice to say that:

Cellular mechanism of the Frank-Starling relationship

It would probably do wonders for the credibility of this resource if the author quoted more papers published north of the 1960s. Solaro (2007) gives a very brief editorial rundown, which is actually enough for the casual reader. Zhang (2016) has an entire doctoral dissertation on the subject, available to registered members of EThOS.  The middle ground in detail is held by Fuchs (2002) which is a satisfying compromise of depth and breadth, but you'd have to buy Molecular Control Mechanisms in Striated Muscle Contraction in order to read it. Some effort has been made to melt these excellent works down into short memorable point-form statements, as below:

The Frank-Starling mechanism is closely allied to the generic concepts required to understand the length-tension relationship of striated muscle. Without revisiting a whole chapter of musculoskeletal physiology, the latter can be summarised as the observation that the amount of force a muscle is able to generate is dependent on the degree to which it is stretched, and that that there is an optimal length at which this force is maximal. The main difference between skeletal muscle and cardiac muscle here is that cardiac muscle has a much steeper length-tension response relationship, mainly because of the increase in calcium sensitivity that occurs with increased stretch.

The functional significance of the Frank-Starling mechanism

The main reason for this mechanism is the need to match the output of the heart to constant changes in the right and left cardiac output, and to adjust rapidly (within one beat) to sudden changes in preload conditions. To illustrate the point, let us consider a preposterous scenario where there is no Frank-Starling mechanism. If the stroke volume remained the same irrespective of loading conditions, the ventricle would dilate hideously with increasing preload. If the right heart were to increase its output but the left one did not, there would also be an accumulation of blood in the pulmonary circulation. Similarly, if the RV decreased its output, without adjusting to the change in pulmonary blood flow the left ventricle would rapidly empty the pulmonary circulation.

Thus, in uncharacteristically laconic point form, the main functional significance of the Frank-Starling mechanism is:

Frye, Robert L., Eugene Braunwald, and Estelle R. Cohen. "Studies on Starling's law of the heart. I. The circulatory response to acute hypervolemia and its modification by ganglionic blockade." The Journal of clinical investigation 39.7 (1960): 1043-1050.

GLEASON, WILLIAM L., and Eugene Braunwald. "Studies on Starling's law of the heart: VI. Relationships between left ventricular end-diastolic volume and stroke volume in man with observations on the mechanism of pulsus alternans." Circulation 25.5 (1962): 841-848.