This chapter is relevant to Section G3(i)  of the 2017 CICM Primary Syllabus, which asks the exam candidate to "describe and explain cardiac output curves, vascular function curves and their correlation".  This element of cardiovascular physiology which is a very attractive candidate for vivas and short answer questions, and it is surprising that it has only ever appeared once, as Question 13 from the second paper of 2011. Though the question asked us to "discuss the regulation of cardiac output", what the examiners clearly meant was "explain how the Guyton model describes the relationship of cardiac output and venous return".

The cardiac function and vascular function curves (and their "correlation", which is where you basically just superimpose them on top of each other) is an attempt to answer a series of questions.  What factors are responsible for the matching of cardiac output and venous return? Are the same factors acting on both, or are they independent? And what role does right atrial pressure (CVP to the rest of us) play in determining cardiac output?

Because this whole thing is Arthur Guyton's fault, it would be reasonable to reference his seminal 1955 paper here, but that is not the same as a recommendation to read it. Most normal people should start with watching the lecture series by Jon-Emile Kenny which, over 111.4 minutes, will bring about a feeling of peaceful cosmic oneness with this subject matter. In contrast, reading the reference list at the end of this chapter for 111.4 minutes will have a very different effect. A much better resource for the trainee who still insists on text would probably be this section on doctorlib.info, from what appears to be a free online version of Linda Costanzo's Physiology. Venous return and vascular function curves are handled best by the Venous Return chapter from Young's Control of Cardiac Output (2010).

Otherwise known as the cardiac function curve, this thing resembles the Frank-Starling relationship, except right atrial pressure is used as the x coordinate instead of the end-diastolic volume, and the y-axis is cardiac output instead of stroke volume. Though those parameters are hardly interchangeable, it is possible to continue the discussion without breaking off into a digression about it because they are closely related. Right atrial pressure is an important determinant of right ventricular end-diastolic volume, and is therefore a good-enough surrogate for it. Moreover, it allows the venous return to be plotted on the same graph as the cardiac output, as now both are being measured with the same units. 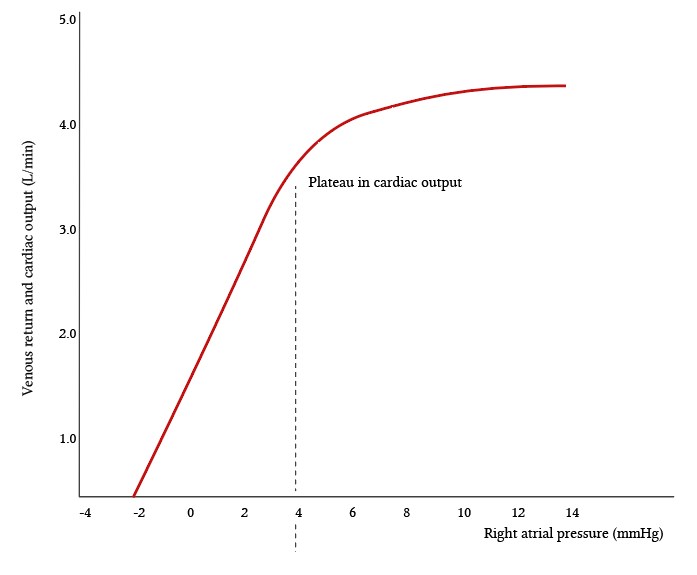 When reproducing this diagram, the trainee needs to keep in mind that every textbook everywhere has made a completely arbitrary choice with regards to the labelling and scale. It seems one can put any combination of numbers on either axis. Some authors don't even bother. For some semblance of authenticity, the diagram above has been modelled on the original Guyton diagram from 1955, but - judging by the values and what we know about the author - these data may well have been collected from a particularly large dog.

It is important to suppress these suspicions in order to function at the exam. For a quick sketch, the essential elements of such a diagram are: 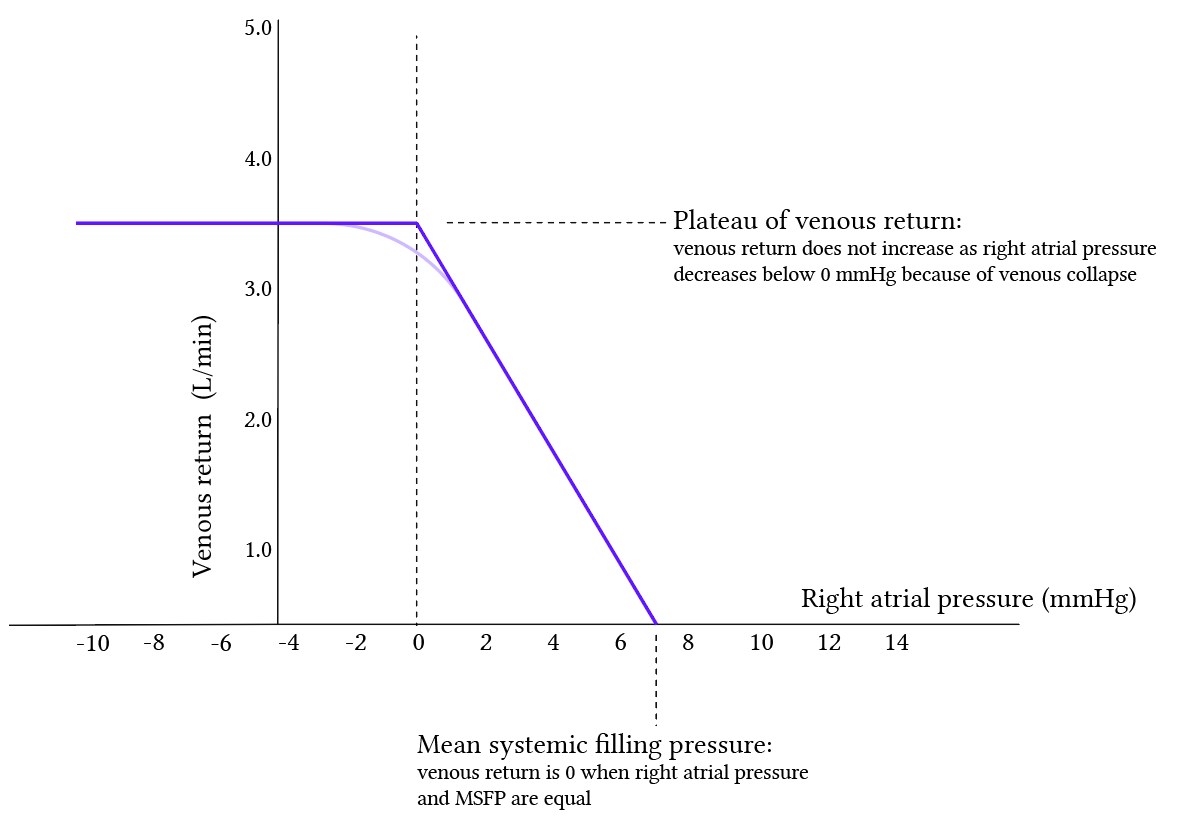 There is usually a sharp elbow to these diagrams, but as the original graphs below demonstrate, the in-vivo relationship is much smoother than that.  Again, all of this comes from experiments by Guyton, in 1950s. Instead of a pulsatile heart, the cardiac output was provided by a pump which sucked blood out of the right atrium and pushed it directly into the aorta. Mean systemic filling pressure was varied by adding fluid, and venous vascular resistance was stable over the course of the experiments.

The following essential elements belong in this graph:

The intersection of the cardiac output and vascular function curves

Now that we have both the cardiac and the vascular curves in hand, and knowing that they are plotted on the same axis, the next natural step is to combine them into one diagram, which is occasionally referred to as the Guyton diagram for some reason. 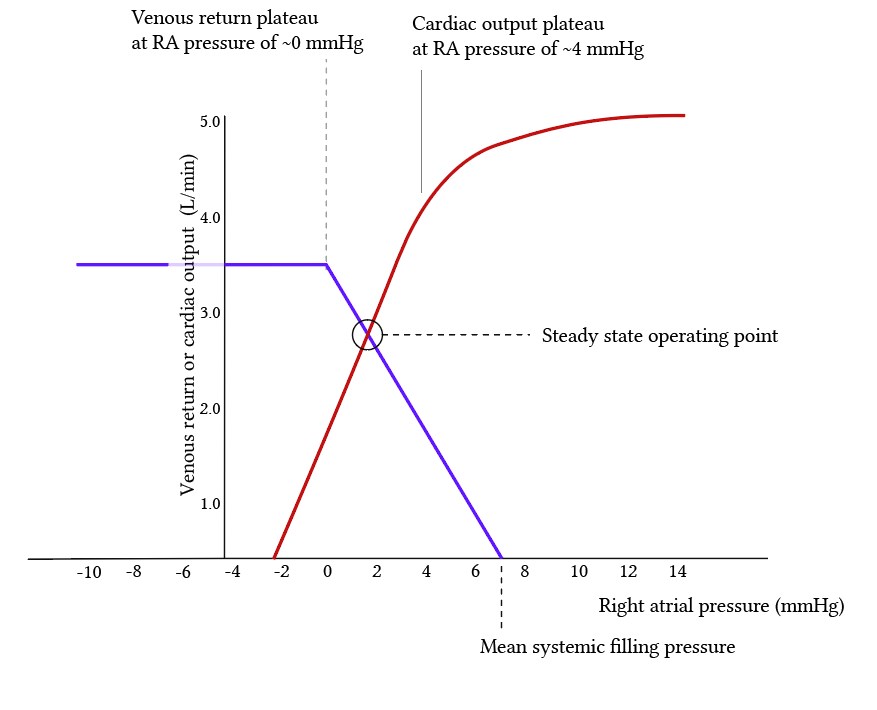 Now, let us see what happens when the variables are altered.

Effect of volume on the cardiac output/venous return relationship

Guyton and colleagues' dog preparation allowed them to vary the mean systemic filling pressure by adding or subtracting fluid from the circulatory system while all the other variables remained fixed. In this way, they were able to record a series of venous return curves which ultimately made their way into all the textbooks: 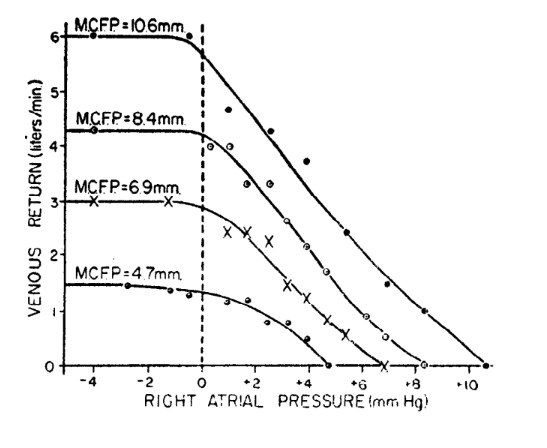 Thus, the linear relationship between RA pressure and venous return remains unchanged (which makes sense, because that is a pressure gradient) but the maximum venous return value increases.

Now, let us plot this on the same coordinates as the cardiac output. Observe what happens to the steady state operating point: 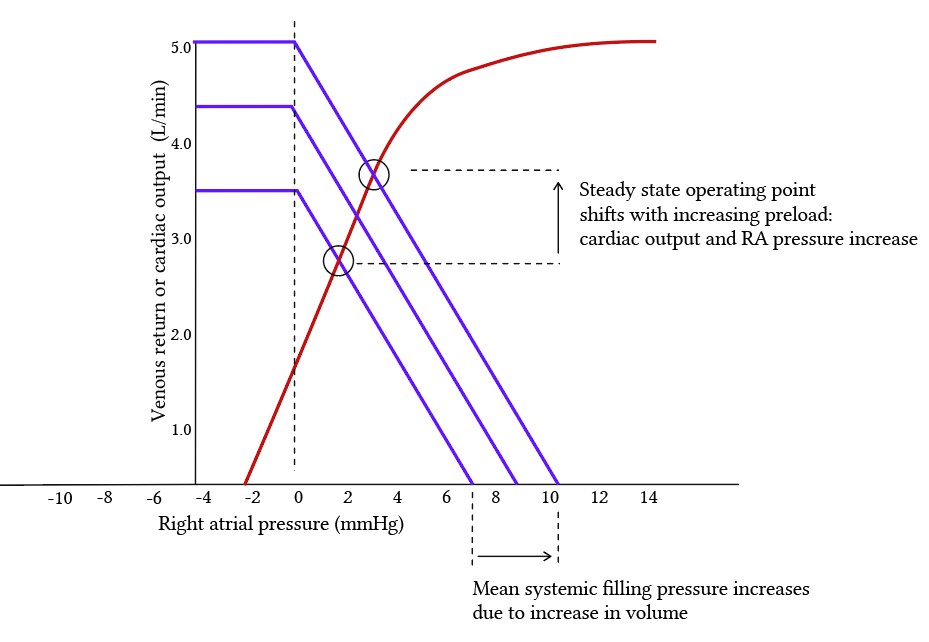 So, with the increase in volume, the RA-venous return relationship shifts right, and the steady state point migrates up along the cardiac output curve. This is exactly what would happen if the venous compliance were to change. The increase in venous smooth muscle tone would increase the size of the "stressed" volume (see the preload chapter again) and shift the curve to the right, i.e. the effect would be identical to giving a fluid bolus. Again, this is something Guyton et al (1954) measured directly, using an infusion of adrenaline.

Effect of contractility on the cardiac output/venous return relationship

If all the volume variables remain the same, but the contractility increases, the venous return and cardiac output both increase: 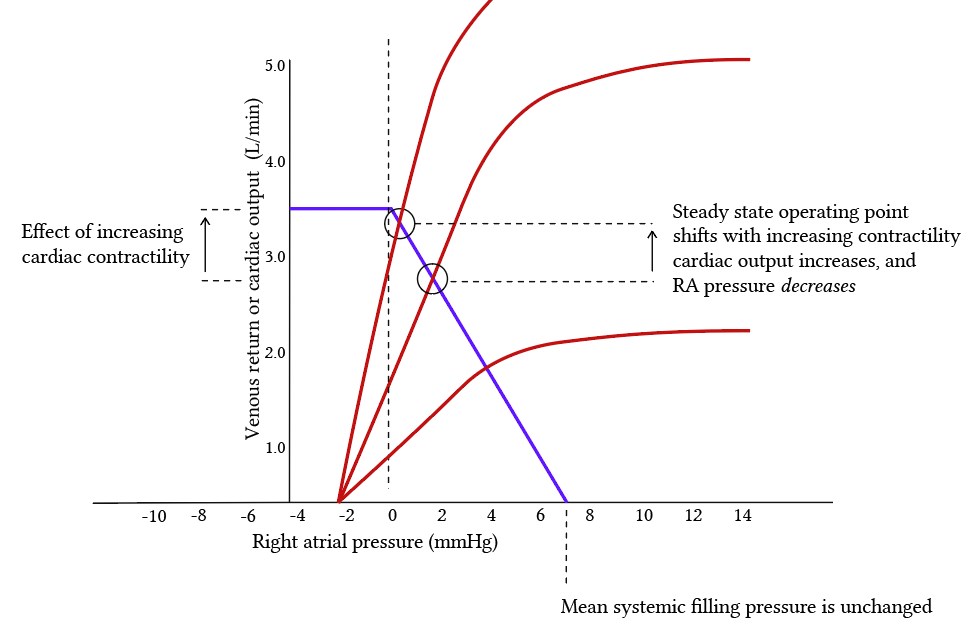 The mean systemic filling pressure remains the same, However, as the cardiac function curve has shifted to the right, so has the steady state point, which means that the increase in cardiac output is associated with a decrease in right atrial pressure.

If the total peripheral vascular resistance (i.e. arteriolar smooth muscle tone) were to increase,  it would represent an obstruction to the flow of blood out of the arterial and into the venous circulation.  Venous blood volume would therefore decrease (more of the blood is now stuck in the arterial circulation). The MSFP would remain more or less the same, because its major determinants are largely unaffected: the total blood volume has not changed, and the vascular resistance in the arterioles only affects about 3% of the total blood volume. So the steady state point would shift down, as below: 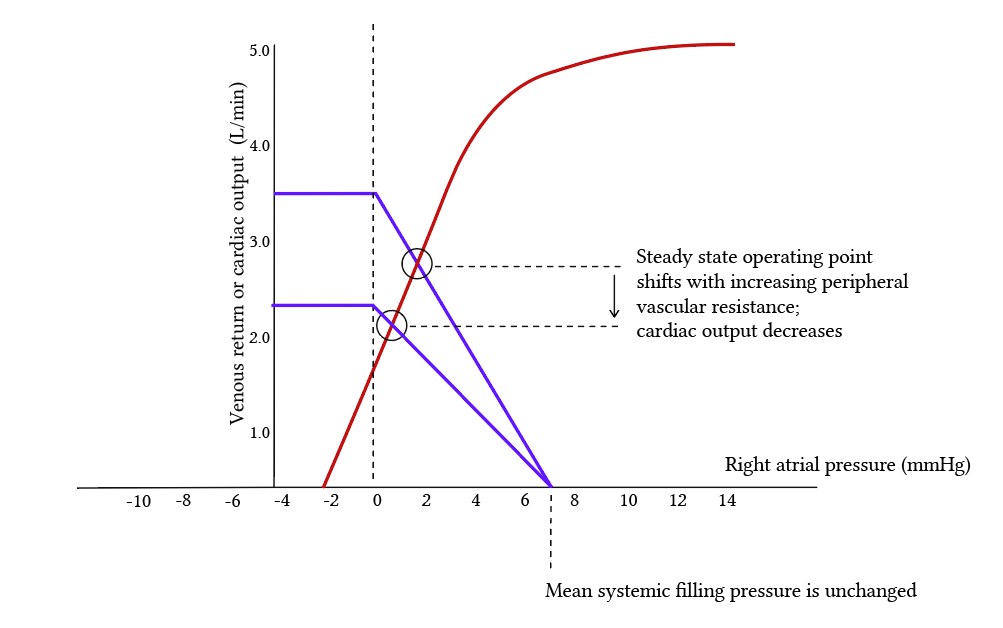 This model, therefore, suggests that as arterial resistance increases, there is an increased amount of blood being sequestered on the arterial side of the circulation, i.e. it cannot make its way into the venous side, and venous return therefore decreases. Cardiac output drops, and the right atrial pressure ...decreases? To borrow a turn of phrase from Beard & Feigl (2011) "At this point the knowledgeable reader has probably become impatient. This is not how the cardiovascular system behaves". Which brings us to:

What the hell is the point of all this

If one had the education of future intensive care specialists as one's primary goal, one would have to say that the main objective of studying these relationships is to generate a simplified model of the cardiovascular system, which:

What is almost certainly not the point of this, is to indoctrinate the trainees with a peculiar Guytonian model of the circulatory system, which maintains that the venous return plays a central role in the regulation of the cardiac output, that the heart plays a "permissive" role, i.e. it pumps everything it is presented with, and where the right atrial pressure is a "back-pressure" which restricts venous return and decreases preload. Henderson et al (2010) are probably the best at describing the main premises of this model in an impartial manner.  Beard & Feigl (2011) do an excellent job of explaining its limitations, and Jon-Emile Kenny does an excellent job of defending it. If we had to reduce this whole argument to point form, it would look like this:

This is of course a grossly oversimplified representation of a debate which still continues in eldritch academic dimensions where ancient entities lash each other with unimaginable energies.  Those of us at the bedside are thankfully insulated from this unpleasantness, and it is possible to carry on with a fruitful career in critical care medicine with only the faintest appreciation of these issues, safely using fluid and vasoactive substances. Therefore the main take home message, after almost three thousand words of this, appears to be that separating the circulatory system into these discrete components makes it easier to explain to novices, at the cost of some accuracy and, some might argue, your soul.

Guyton, Arthur C. "Regulation of cardiac output." Anesthesiology: The Journal of the American Society of Anesthesiologists 29.2 (1968): 314-326.