This chapter has no relevance to any section of the 2017 CICM Primary Syllabus, because the college has never asked their exam candidates what the concepts of mean systemic and mean circulatory filling pressures actually mean. However, these terms crop up in a variety of places. Basically any situation which calls for a discussion of the determinants of cardiac output venous return preload or central venous pressure will come to a point where one will have to at least mention MSFP, if not explain it. Thus, the author felt it necessary to dedicate an entire separate page to it, in order to address some misunderstandings, predominantly his own.

The best introduction to this topic is probably the article by Carl F. Rothe (1993), written with the authority of somebody whose previous three decades were spent doing pioneering research on the subject. Though the concept is well accepted in medical literature, its application to the interpretation haemodynamic physiology is not without its controversy. However, if a CICM trainee were to argue too competently against it, they could put themselves in a perilous position of being more correct than the examiner. For the purpose of successful exam performance, it would be best to skirt around the question of the usefulness of this variable, or the validity of Guyton's haemodynamic model.

Blood pressure in the absence of circulation

Preempting some of the definitions below, one can safely say that the mean circulatory filling pressure is basically the pressure exerted by the blood pooling in the circulatory system of a dead body. Consider the following thought experiment, explained by means of a series of diagrams. Theoretically, one diagram would have been enough, but this website has a long history of overdoing things.

So. Arteries typically have a high mean pressure, and veins typically have low mean pressure, with the capillaries belonging somewhere in between. The high arterial pressure is mainly due to the pressure produced by the cardiac pump action, as well as (to a lesser extent) the muscularity of arterial walls. The low venous pressure is low partly because of the low muscular tone in the walls of these vessels, and partly because the pumping action of the heart continuously decompresses the central veins. 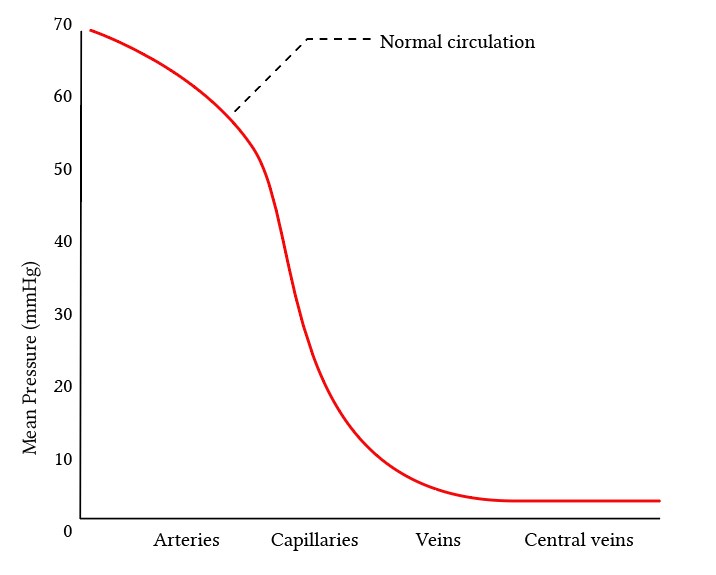 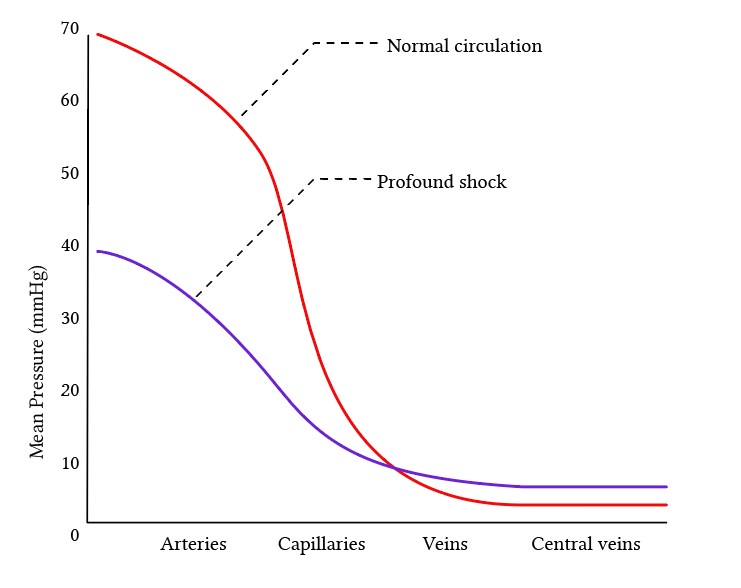 Now, let's say the heart stops. Pulsatile pump action ceases, and arterial pressure drops precipitously.  However, flow does not cease entirely.  The arteries, being more muscular, exert a greater pressure on their blood content then do the veins, and because of this pressure gradient some of the arterial circulatory volume gradually migrates into the venous circulation when the heart has stopped. This volume is about 4ml/kg, i.e. about 300ml in a normal sized human, or about 6% of the total circulation volume. These values come from Rothe (1976) who produced cardiac arrest in dogs and then measured the amount of blood he needed to remove from their central veins in order to keep their central venous pressure at a stable pre-arrest point.

Thus, some volume ends up being redistributed into the venous side of the circulation and after a long enough time venous pressure increases and arterial pressure drops, until both pressures are in equilibrium. This is the mean circulatory filling pressure, or “mittlere Druck der Fliissigkeit”. 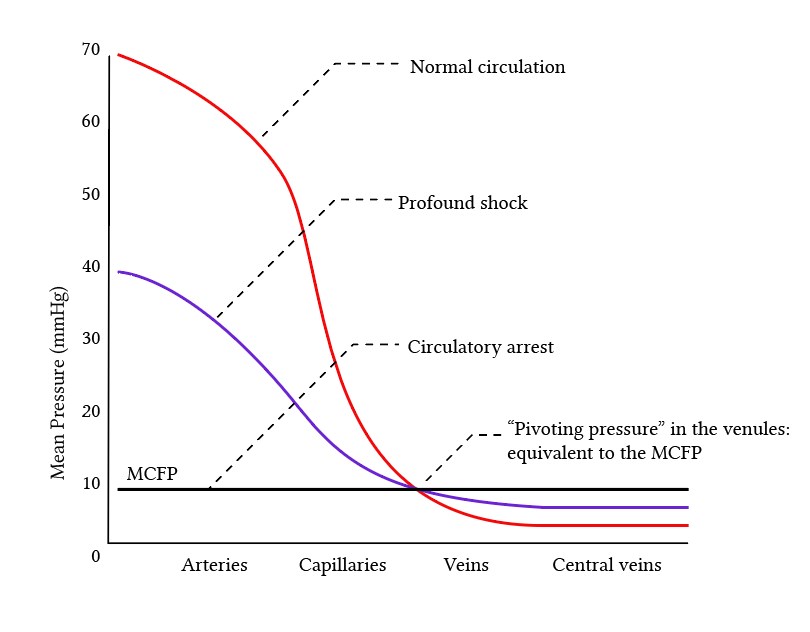 One might notice that during this entire process, somewhere in the circulatory system there is a points which remains at a stable pressure (which happens to be the MCFP),  irrespective of the catastrophic events reverberating through the rest of the organism. Rothe (1993) thought that this probably happens in small venules (less than 1mm diameter), and that it is not constant - present at different points of different organs, and changing constantly depending on prevailing conditions.

Mean circulatory filling pressure (MCFP) is the pressure in the entire circulatory system in the absence of flow. It is the pressure exerted by the walls of the circulation (including the heart and pulmonary vessels) on its fluid content, and so can be thought of as a measure of the elastic recoil potential stored in those walls. It was defined by Arthur Guyton as

"The pressure that would be measured at all points in the entire circulatory system if the heart were stopped suddenly and the blood were redistributed instantaneously in such a manner that all pressures were equal.”

Mean systemic filling pressure (MSFP) is the pressure in only the systemic circuit, i.e. ignoring the heart and pulmonary circulation, also in the absence of flow. This is usually the pressure people are interested in when they are discussing cardiac preload and vascular function curves, because this is the pressure which is thought to push blood towards the right atrium along a pressure gradient.

Mean cardiopulmonary filling pressure is therefore the mean pressure in the motionless cardiac chambers and the pulmonary circulation. This variable is a necessary counterpart of MSFP but is rarely discussed. It is usually about 3 mmHg higher than the MSFP, mainly because of the higher elastance of the cardiac chambers. It can be measured at the bedside by simultaneously clamping all the greater vessels and stopping the heart.

After generating entire mountains of dead mongrel dogs, Guyton and associates were able to confidently say that the MSFP is probably around 7-8 mmHg in most medium-size mammals. Human data were more difficult to collect in the enlightened post-Nuremberg scientific environment, considering that cardiac arrest is one of the main requirements for accurate measurement.  However, the ingenuity of investigators has provided us with some information which basically confirms Guyton.  Schipke et al (2003) managed to convince about eighty people to have their MSFP measured during induced cardiac arrest (VF, in the process of implanting an AICD) and found MSFP values around 12 mmHg. The investigators complained that the duration of cardiac arrest (~13 seconds) was not long enough to get good measurements: the arterial and venous pressures never equilibrated. A later study by Repessé et al (2015) did not have this problem, as they used dead ICU patients who happened to have CVCs and arterial lines; and again the MSFP was around 12 mmHg. Their data is reproduced below, for demonstration of the concept.

Following from the above, there must be two main factors which determine the MSFP:

The tone of the smooth muscle which make up the walls of the circulatory system is clearly something that is going to play a role in the elastic recoil pressure which produces the MSFP. Repessé et al (2015), in the study already described above, mentioned that the MSFP in dead patients who had been receiving noradrenaline was higher (around 14-15 mmHg), which makes sense because noradrenaline is a potent arterio- and venoconstrictor.  For contrast, a much earlier study by Starr (1940) returned measurements of 5.6 mmHg from bodies which had been dead for several hours, which is probably what happens when all smooth muscle tone is irreversibly lost.

Volume in the circulatory system obviously also plays a role. Pouring fluid into a vessel places a pressure on the walls of that vessel, and in the circulatory system the pressure these soft squishy walls produce is mainly dependent on the tone of the smooth muscle (see above).  Often one can find this concept separated into the "unstressed" and "stressed" volumes. The "unstressed" volume is said to be a volume of fluid (presumably, blood) in the circulatory system which does not produce any "stress" on the walls, i.e. where measuring the MSFP would yield a pressure of 0 mmHg. According to Young (2010) and Magder (2016), "unstressed volume" describes about 85% of the total venous blood volume:  in a circulation with minimal sympathetic tone, only about 15% of the total blood volume is contributing to generating the MSFP. 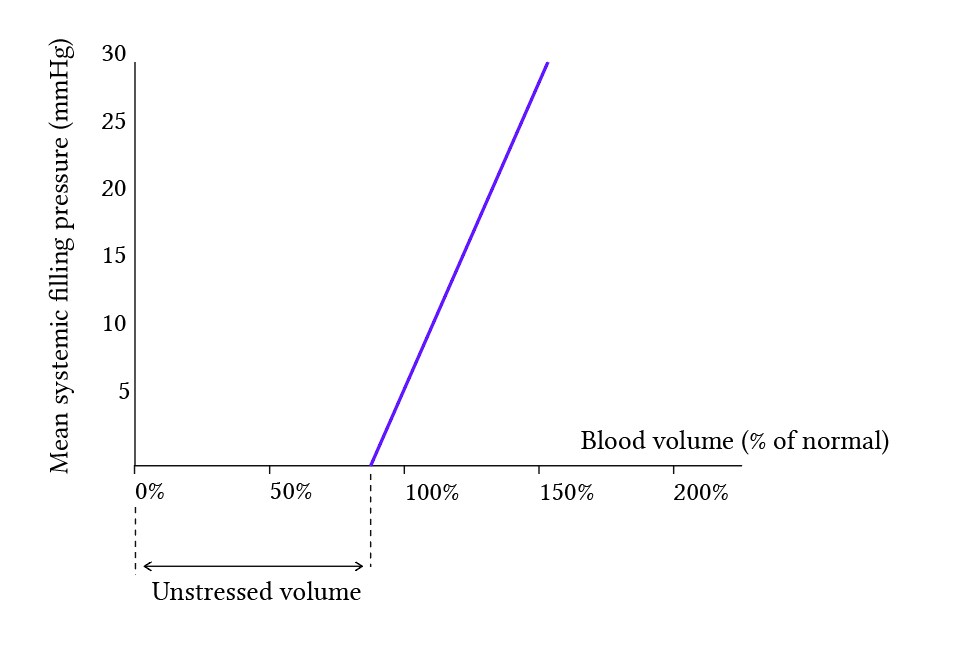 Logically, the "stressed volume" is therefore "the volume of blood that must be removed from the vasculature to decrease the transmural pressure of the vessels from the existing value to zero".  According to Rothe (1983), these volumes are purely hypothetical constructs, "computed by extrapolating the linear portion of the capacitance relationship to zero transmural pressure". The real curve becomes less linear at very low MSFP values (under 5mmHg), as was demonstrated by Lee et al (1988): 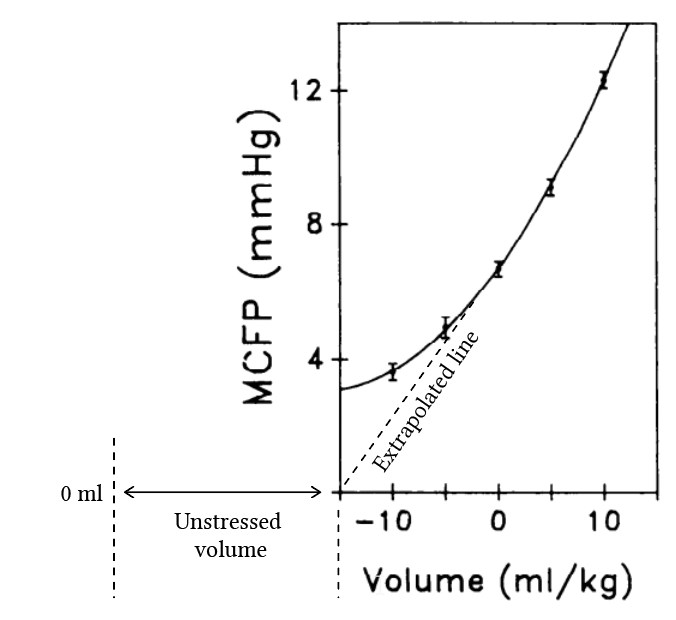 So, the unstressed volume is probably not completely unstressed. In any case, it would defy logic for intravascular pressure to actually be zero mmHg, as even one millilitre of fluid exerts some nonzero pressure onto the walls of the chamber which contain it.

The meaning and relevance of mean systemic filling pressure

The Guyton model suggests that the flow of blood returning to the heart is mainly driven by this mean systemic filling pressure. This is the pressure blood flows from, and CVP is the pressure it flows to, overcoming venous vascular resistance in the process. Cardiac output, in this model, plays no role in determining the pressure in the venous circulation.

Not everybody is in agreement that these concepts have any scientific value. Magder (2006),  Brenglemann (2003) and  Henderson et al (2010) give more detail, but here it will suffice to say that various serious students of physiology have taken exception to Guyton's experiment design, measurement methodology and basic reasoning.  However, the CICM trainee is advised to make peace with this controversy, and memorise this haemodynamic shibboleth as if it were a Newtonian law.  This concept is very popular and there is a risk that the viva examiner sitting across the table from you is a strong supporter. Glittering rockstars of FOAM (eg. Jon-Emile Kenny, of PulmCCM) also lend credibility to it by increasing its exposure. Moreover, in their comments for Question 19 from the first paper of 2014, the examiners mentioned that "additional marks were awarded for descriptions of the relationship to mean systemic filling pressure and other influences beyond this". In short, MSFP passes exams.