This chapter is relevant to Section G3(v)  of the 2017 CICM Primary Syllabus, which asks the exam candidate to "describe the pressure-volume relationships of the ventricles and their clinical applications.".  It is also probably relevant to Section G6(iii), "Explain the systolic pressure-volume relationships of the ventricles and their clinical applications." There is either a hidden educationally relevant meaning in the difference between describe and explain, or there is some significance to the use of the word systolic in section G6. It may be an intentional epimone to increase the emphasis on this topic, it may represent an inadvertent duplication of a syllabus item by a sleep-deprived examiner, or it may indicate that in a broader sense words have no meaning and communication in general is futile. In any case, it appears that this topic has some relevance to the First Part candidate, as this material has appeared in several past papers:

In case a diagram was ever called for, it would be difficult to represent everything mentioned here without making a big mess. However, that's what the college seem to want. So here's a PV loop diagram with all the things: 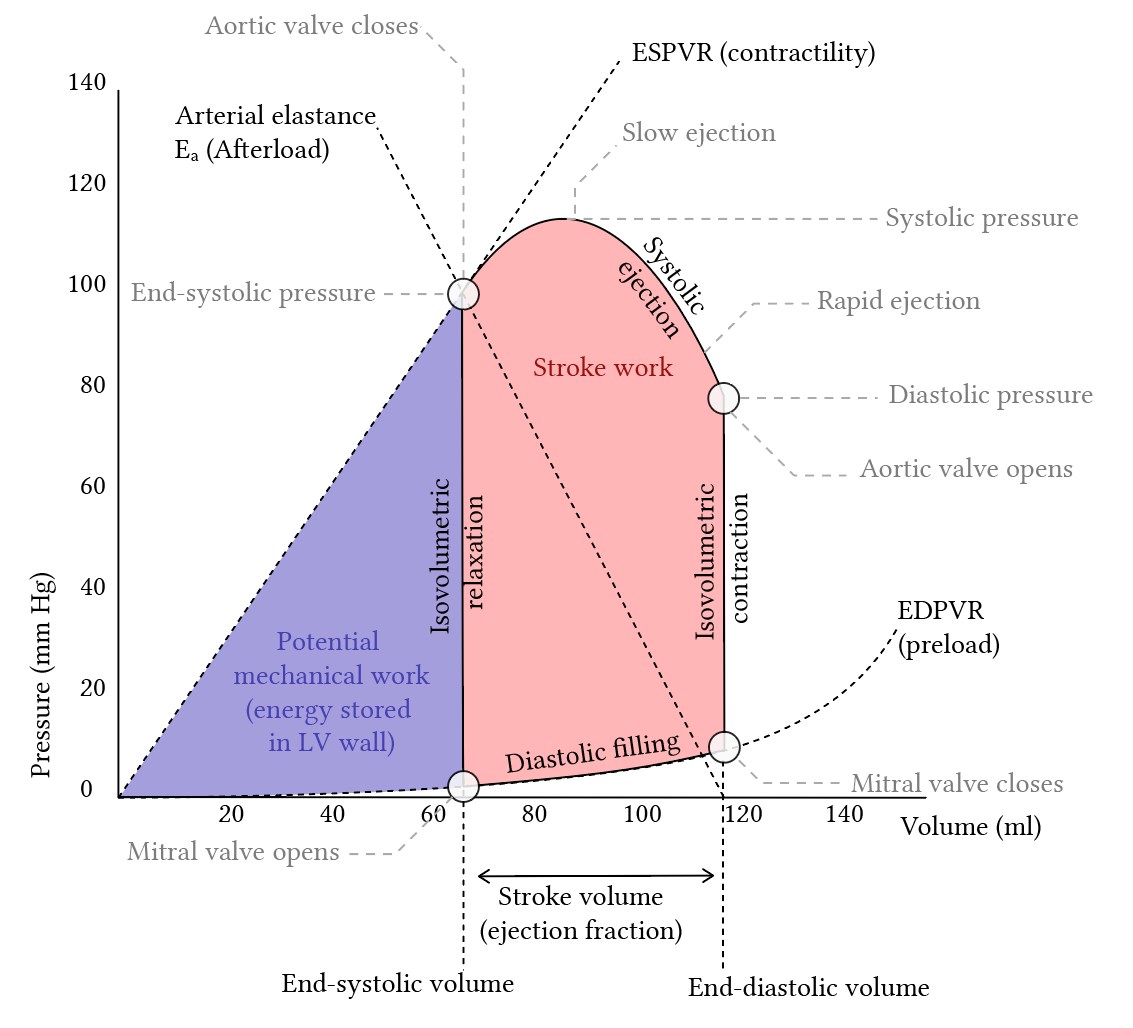 That's a lot of information, and the temptation is to unpack it carefully, but at the same time wishing not to be overgenerous with the reader's time.  For a succinct introduction to this subject which sacrifices no detail, one could do no better than the Part One summary of ventricular pressure-volume relationships. In many ways, what follows is a series of longform footnotes and appendices to this Part One entry. Trainees are reminded that their goal is to pass the exam, and that extensive reading on this subject (beyond the Part One level of detail) is in excess of their specific needs.

In terms of published literature, one cannot look past the first half of Bastos et al (2020).  This would be the recommendation for a trainee who has little time or patience for rambling non-peer-reviewed resources. The second half of that paper degenerates unattractively into a discussion of cardiac resynchronisation therapy and mechanical assist devices, which - though fascinating - scores no marks in the CICM First Part.

At a fundamental level, Otto Frank is to blame for this. In 1899, he published a loop of sorts in "Die grundform des arteriellen pulses", which looked a bit like this: 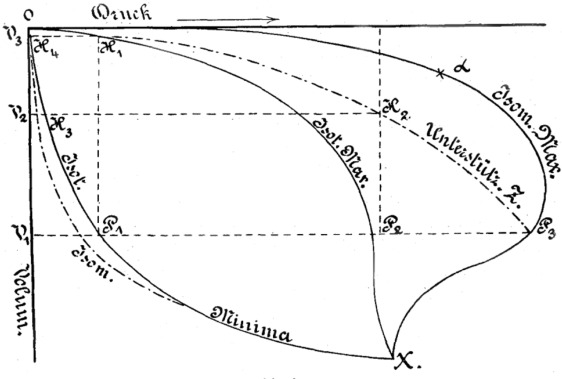 The original Manuskript is of course unerreichbar, but these diagrams are sufficiently famous to get reproduced in all sorts of fanzines (this one is from Middeke, 2016, in J Am Soc Hypertens). Frank recorded them from a frog ventricle which was contracting without any afterload. Later investigators moved onto dogs and humans, added afterload to their experiments, and flipped the axes, resulting in the modern pressure-volume loop appearance everybody will recognise. Here's an example from Pak et al (1996) with a large reassuring label across the top: 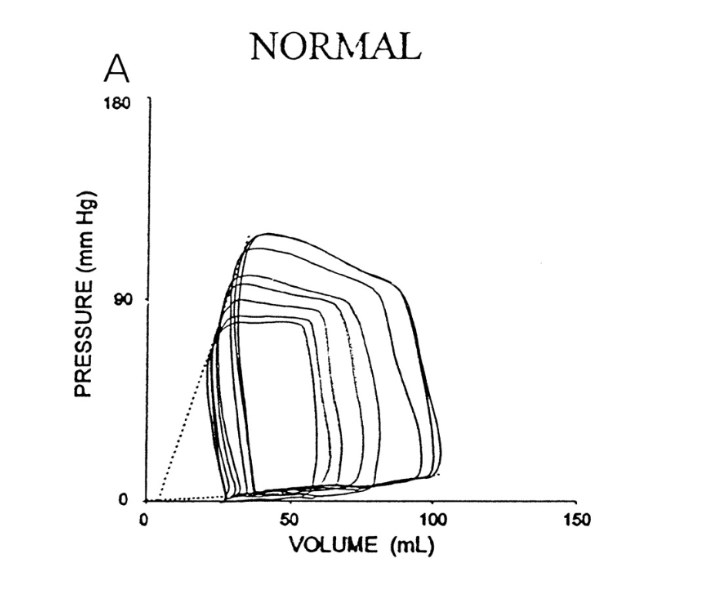 It is of course unfair to say that everybody would immediately recognise this, because it is a real recording from a real human LV and therefore subject to the sort of curvy messiness which makes organic things so difficult to shove into the comforting square mould of physics and maths. Because the real shape of the ventricular PV loop is too squishy to teach PV relationships, most textbooks tend to style it into an idealised form, choosing to focus on the relationships it conveys rather than on the real representation of pressure-volume numbers. Such an idealised loop usually looks something like this: 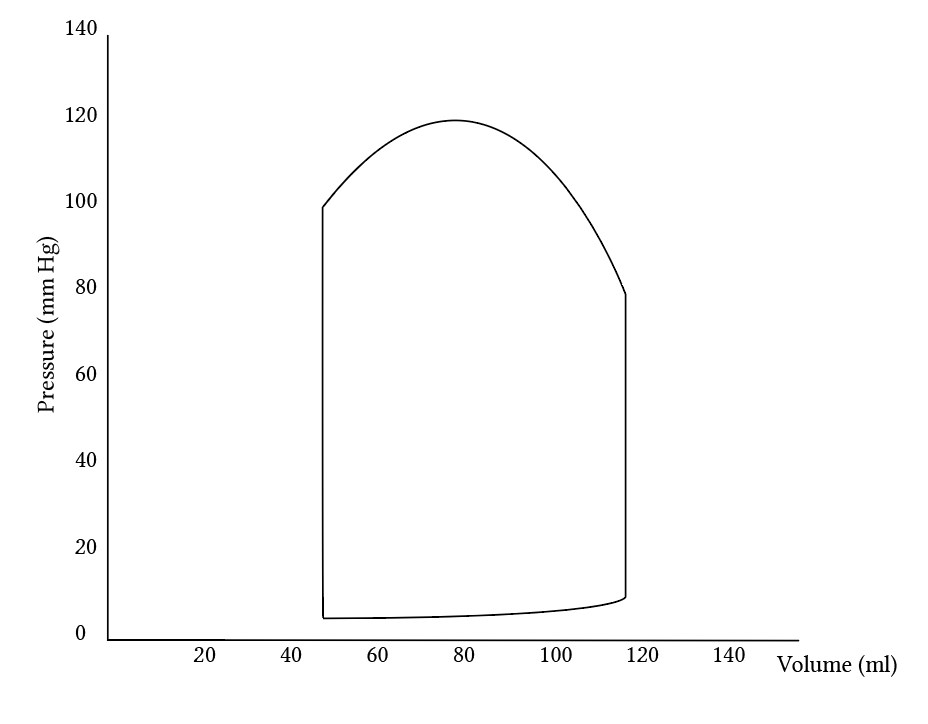 Nobody would ever pass any sort of exam with a naked loop like this, and at a minimum it would have to some sort of labels. For example, one could at least label the major events of the cardiac cycle which occur along the loop:

And it would end up looking a little like this: 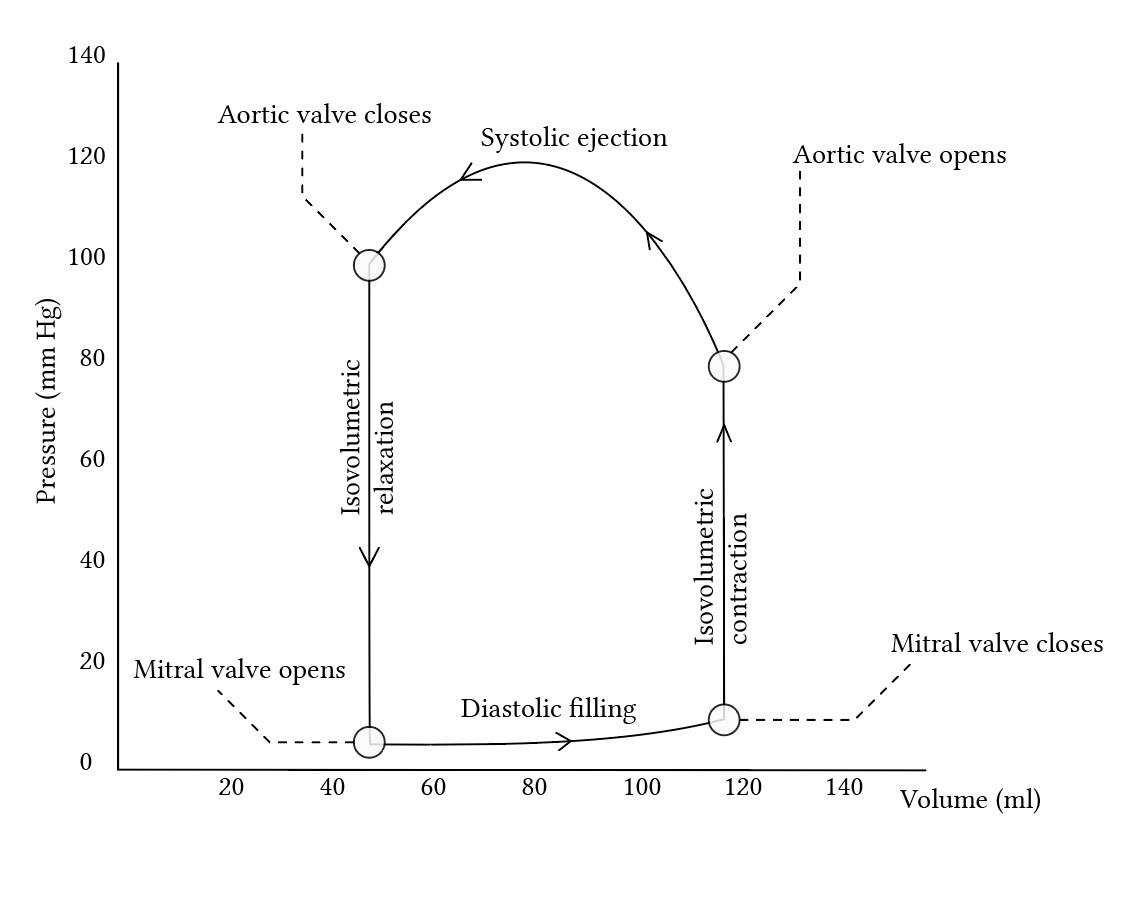 Additionally, one could also label it with the various boundaries and functions of the ventricular pressure and volume relationship:

With these relationships plotted on it, the PV loop would look like this: 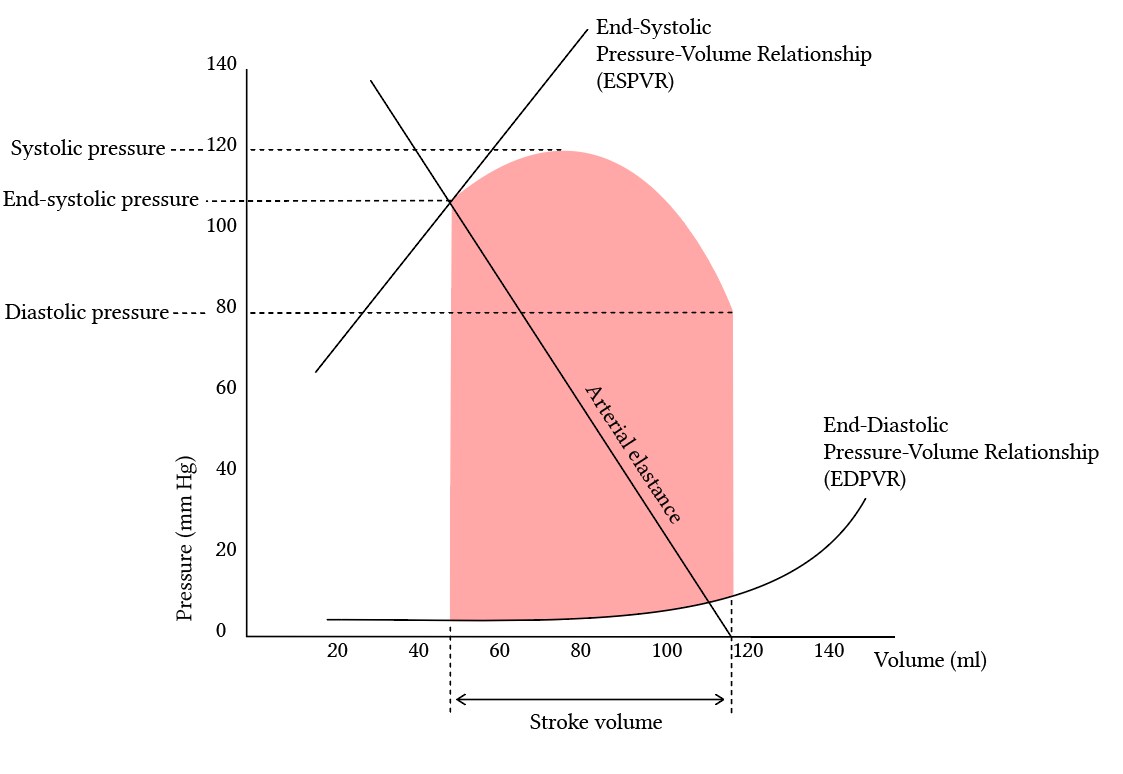 Some understanding of these boundary conditions is probably necessary to fully grasp the interpretation of PV loops, but not for passing CICM written questions, which thus far have been satisfied with accurately labelled diagrams and regurgitated lists of features. A time-poor trainee may wish to stop reading here and move on to more important topics.

This relationship is described by the ventricular diastolic pressure-volume curve, i.e. the increase in pressure observed in the left ventricle which occurs when it fills in diastole. Here is a representative normal curve measured by Zile et al (2004), below and on the left. Working with humans in the enlightened noughties, the investigators could not legally produce unsafe ventricular overdistension to record its effects, and so to demonstrate those effects we have to look into animal studies from the seventies. To the right, for comparison, one can see some dangerously overfilled ventricles from normal and infarcted dogs (Glantz & Parmley, 1978).

To be completely precise (and to confuse things), this relationship describes ventricular elastance, or change in pressure per change in unit volume. Compliance, on the other hand, is a change in volume per unit pressure. Elastance is a better fit for what is being described here, as it relates best to the stiffness of a mechanical system, i.e. its resistance to deformation, or its tendency to recoil back into its original dimensions in response to a distending force. That is exactly what you are interested in when you describe the change in ventricular pressure which occurs when it becomes more stiff, for example following an infarct. To discuss the change in volume which occurs as the result of changing pressure would have less meaning in that scenario, because the volume would be much the same. The ventricular pressure, however, would increase, and give rise to an increased left atrial pressure, which would in turn produce all sorts of clinically relevant phenomena like pulmonary oedema. Ergo, elastance is the preferred term.

Normally the elastance of the LV is low, which allows a wide range of LV volumes with minimal changes to the end-diastolic pressure.  This can be illustrated by again borrowing the normal curves from the abovereferenced NEJM article: 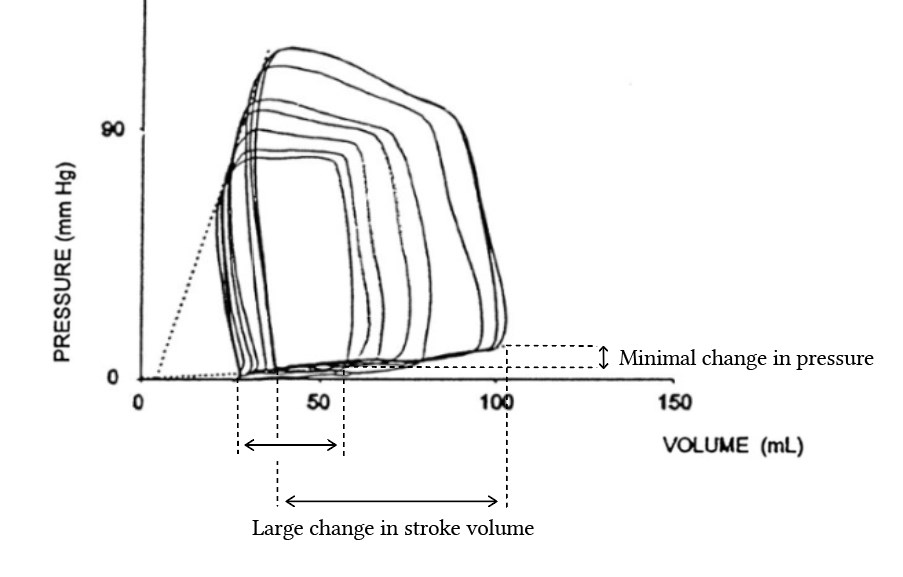 In this fashion, a healthy ventricle can increase its stroke volume (and therefore cardiac output) dramatically, without increasing the left atrial pressure and producing pulmonary oedema.  And, where the left ventricle has increased elastance, the same stroke volume would produce a higher end-diastolic pressure, with all sorts of untoward effects. This sort increase in the elastance of the ventricle (comparable to the decrease in its compliance) is often seen in diastolic heart failure. Because an entire chapter is dedicated to the discussion of this underappreciated disease state, there will be no further mention of it here. Suffice it to say, if one had to wring some sort of clinical relevance from this whole thing, that would be it.

The end-systolic pressure-volume relationship (ESPVR) describes the maximal pressure that can be developed by the ventricle at any given LV volume, and is one of the ways of measuring and describing cardiac contractility. Without restating the content of another chapter, the end-systolic pressure is the pressure left behind after the end of systole, just before the period of isovolumetric relaxation: 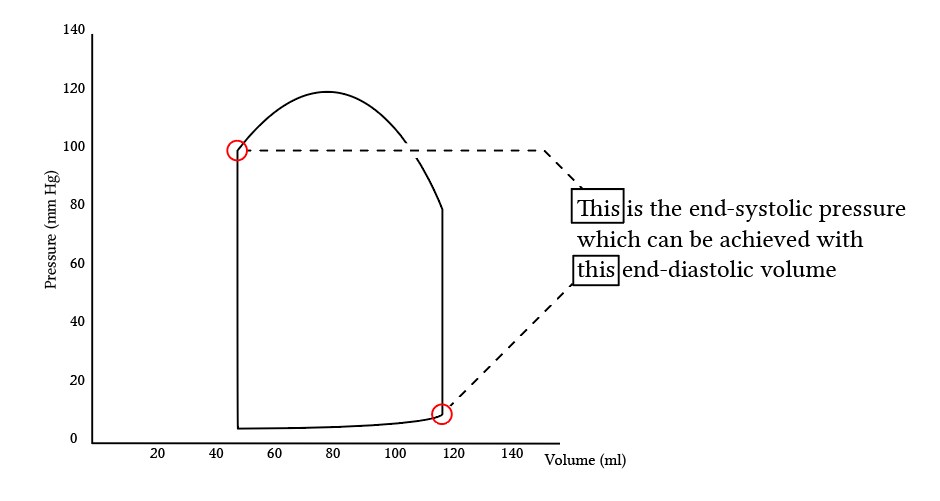 Thus, the ESPVR can be represented by the succession of several PV loops at different volumes, which produces a linear relationship of several end-systolic pressure/volume points: 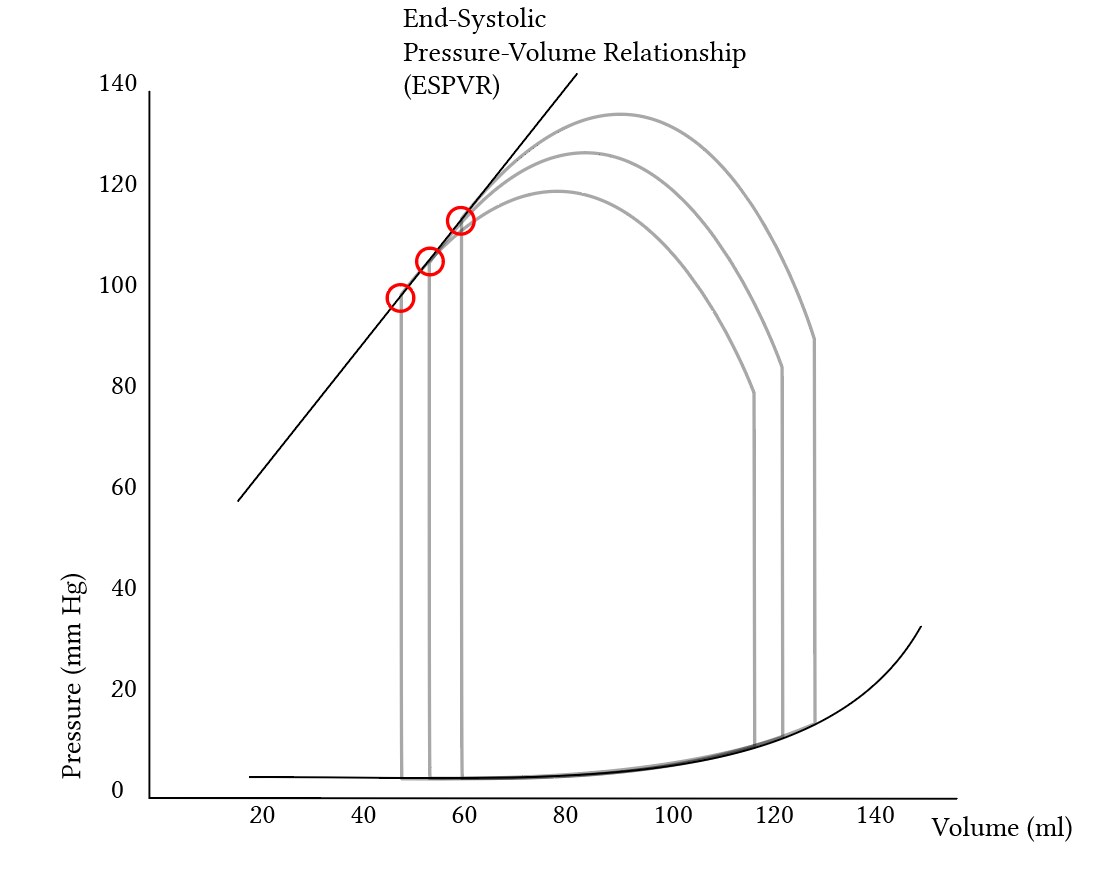 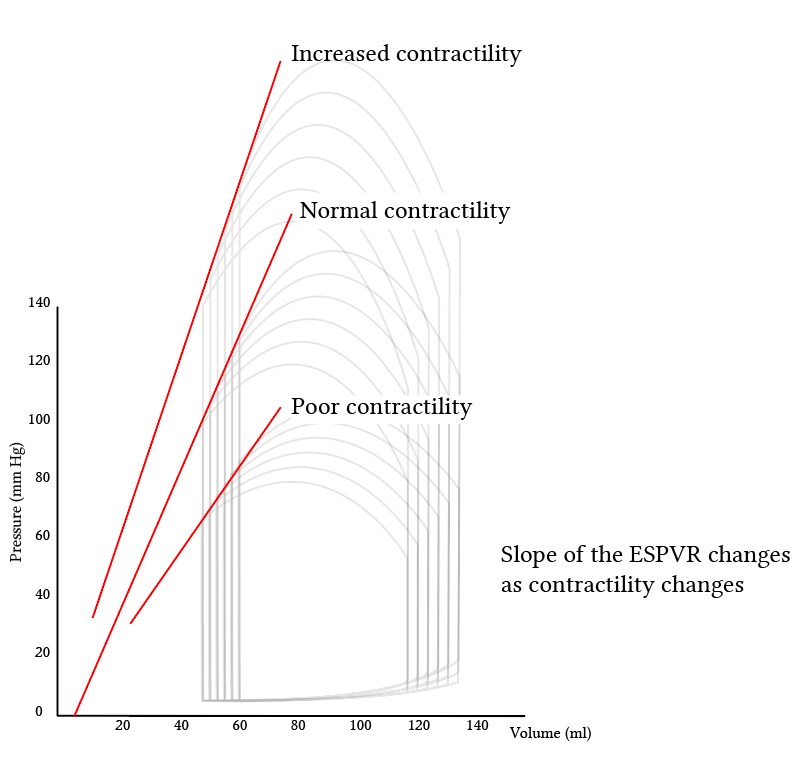 In order to fathom this concept, one needs to understand the ventricular ejection as an exchange of volume between two elastic containers, like one balloon emptying into another. Consider: 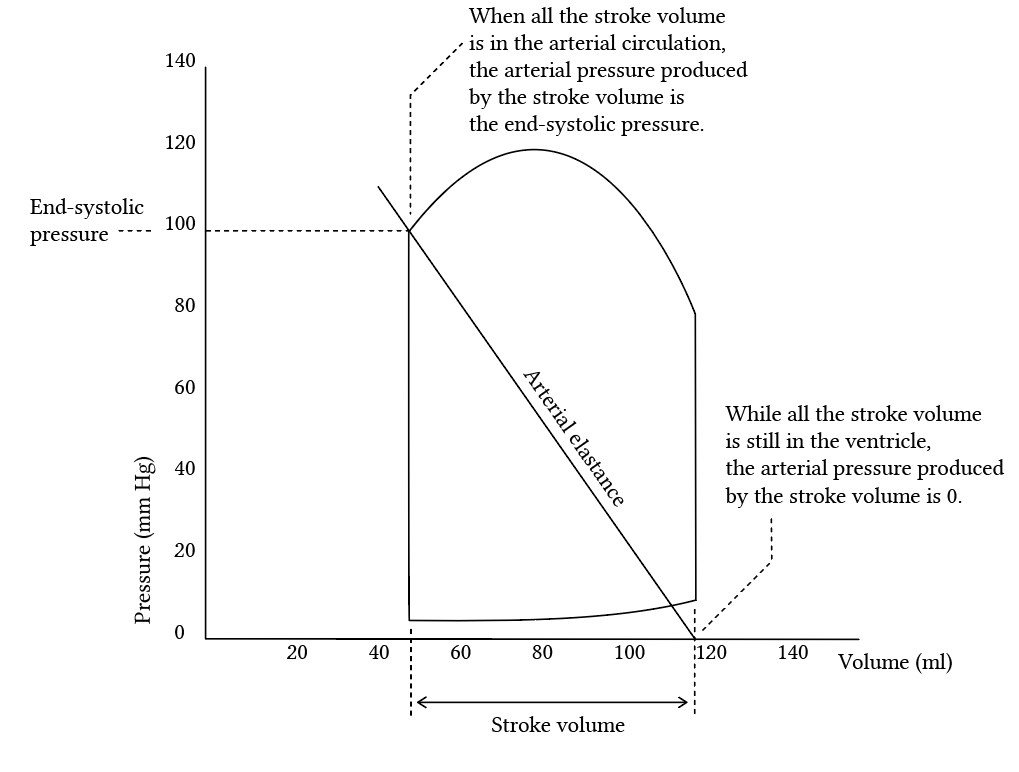 Specifically, this is effective arterial elastance (Ea). This parameter, being pressure divided by volume, represents the elastance of the arterial system into which the ventricle is ejecting:

Sunegawa et al (1983) found that the relationship between the stroke volume and the end-systolic pressure is a handy surrogate for the arterial input impedance, a determinant of afterload which requires complex analysis and which cannot be plotted on the same graph as a PV loop. "Effective" arterial elastance was the term which ultimately stuck, because actual arterial elastance is not what this thing calculates. Rather,

"...it is an integrative index that incorporates the principal elements of arterial load, including peripheral vascular resistance (PVR), total arterial compliance, characteristic impedance, and systolic and diastolic time intervals "

So, effective arterial elastance is a parameter which is often equated with afterload, but which is not actually afterload, and which does not actually represent any specific property of the arteries. It is merely a useful index of arterial vascular "load" which functionally incorporates a lot of afterload-affecting factors (when it is measured directly from a real PV loop).   In simplistic thought experiments where only one variable (Ea) is altered, it can be clearly seen to change the stroke volume and blood pressure. For example, if everything else remains the same and the arterial elastance (i.e. "afterload") increases, the blood pressure will increase and the stroke volume will decrease, as below: 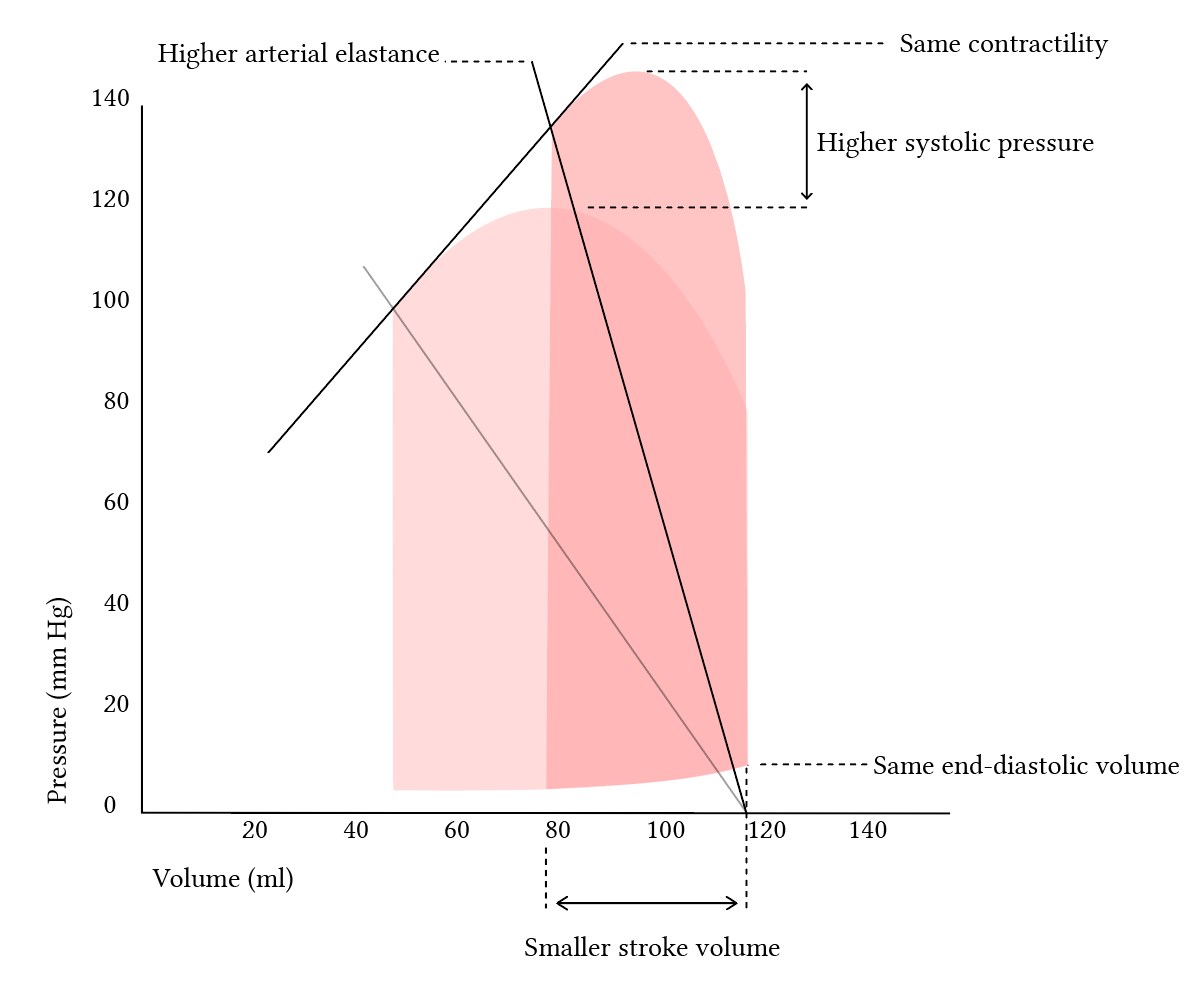 Area of the pressure-volume relationship

Work, conventionally defined as force × distance, can be expressed as pressure × volume (in joules). The derivation of this is described elsewhere and also applies to work of breathing. Thus, we can represent the work done by the myocardium by measuring the area inside the pressure-volume loop. However, that approximation would probably not be completely accurate. Consider: while the myocardium is contracting isovolumetrically, it is not changing its volume and therefore not making any new PV loop area, but nobody would doubt that it is doing work and using up oxygen. 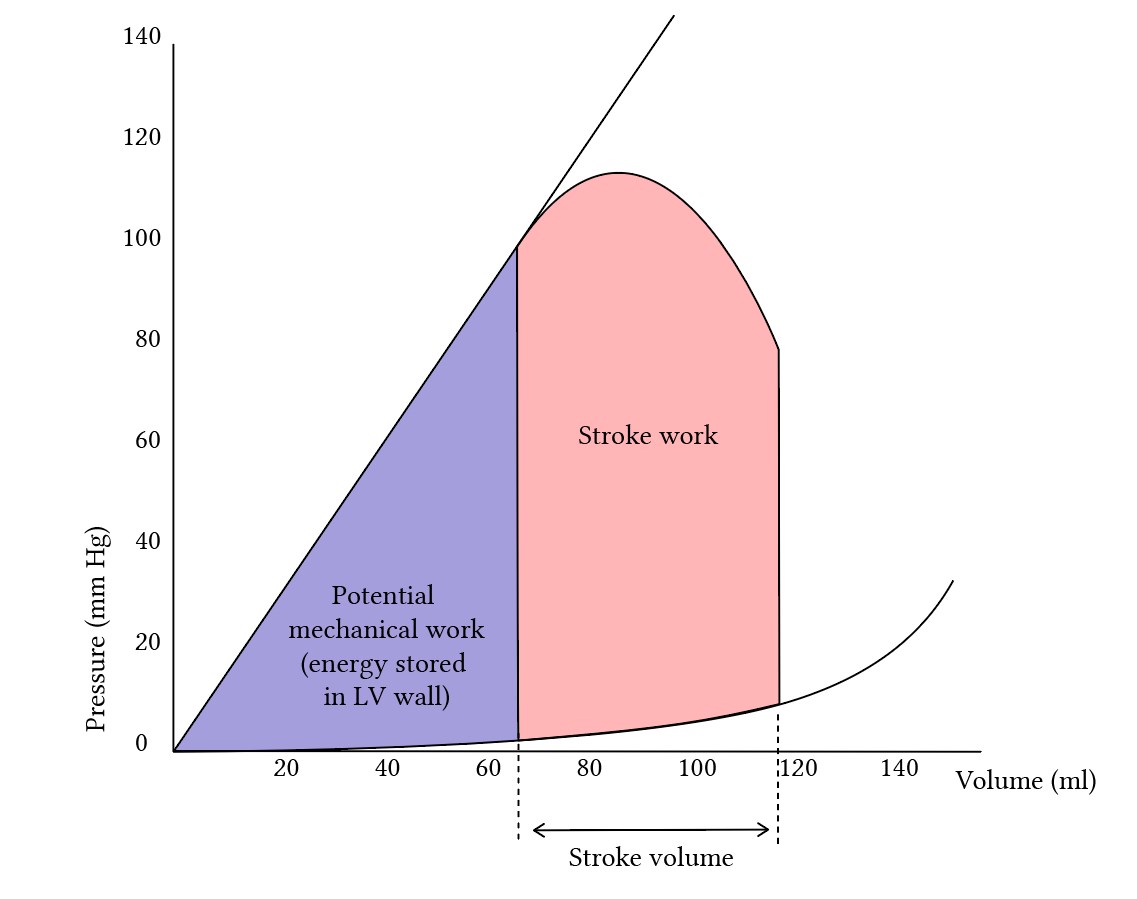 These assumptions appear to be correct. Khalafbeigui et al (1979) were able to find a linear correlation between the PV loop area and the myocardial oxygen consumption. Suga et al (1981) added the "potential work" under the ESPVR curve and determined that the relationship is still linear, but now with a slope of about 30%, which describes the efficiency of myocardial energy utilisation. The area under the ESPVR is the end-systolic potential energy stored in the wall of the ventricle; if the aortic valve didn't close, at least two thirds of this energy would be used to eject even more blood from the ventricle (as demonstrated by Suga et al in 1979).

A comparison of right and left ventricular PV loops

Question 16 from the second paper of 2019 expected the trainees to compare the right and left ventricles along a series of parameters ("structure, function and coronary circulation"). According to the examiner comments, "many marks may be gained by a ....labelled PV loop for each ventricle". So, here is such a loop, cobbled together out of some information in Vonk-Noordegraaf et al (2013), which should hopefully yield "many marks". 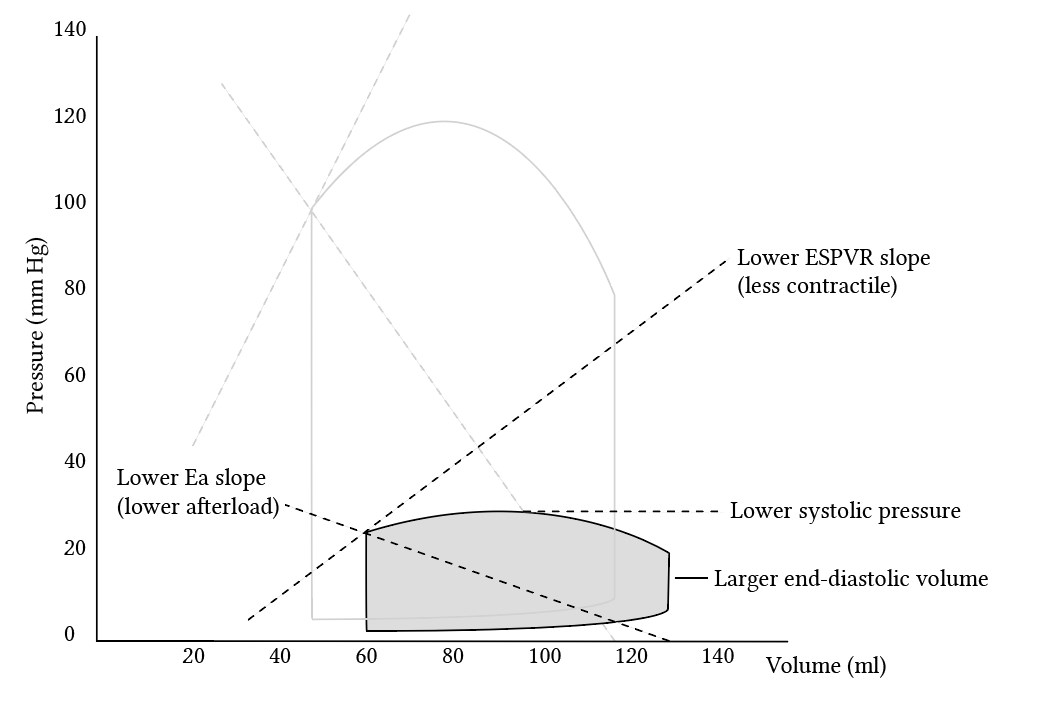