This chapter is barely relevant to Section G4(iii)  of the 2017 CICM Primary Syllabus, which asks the exam candidate to "explain the factors that determine systemic blood pressures and their regulation". Because the college used the word pressures, and because their written records are without reproach, this syllabus item can be extended to encompass central venous pressure. After all, that's blood in there, it's got a measurable pressure, and it is a part of the range systemic circulation pressures (as opposed to pulmonary). The candidates have been asked to comment on this topic on at least three occasions:

In the carboniferous pre-dawn of the JFICM geological period, this topic had also appeared in the Second Part exam (Question 14 from the first paper of 2001). One might have expected it to migrate into the First Part entirely, but it was asked again in Question 8 from the first paper of 2014. Even though it would be sensible to never expect it to appear in that exam again, the vestigial bud of a primitive summary has been left in the Procedures and Equipment section in case the examiners try to recycle it.

For most ICU trainees, the term "central venous pressure" would usually mean "the pressure you transduce from the central line", and in the vast majority of situations that would be sufficient.  Thus, the usual pragmatic definition would have to be something like this:

"The venous pressure of the right atrium of the heart, obtained by inserting a catheter into a vein (such as the subclavian vein) and advancing it to the right atrium through the superior vena cava".

Practically speaking, that's the pressure you would use at the bedside, depending on what your views on that are.  However, for exam purposes, we must transcend the vulgar notions of usefulness and practicality. For the CICM exams, you'd probably be expected to discuss it in Guytonian terms. Thus:

"Central venous pressure (CVP) is defined by the relationship between the right ventricular function...  and venous return curves."

In other words, in this clockwork universe, the CVP is defined by the intersection of three main variables: cardiac contractility, vascular resistance and the mean systemic filling pressure. At any given set of those three values, there can only be One True CVP. 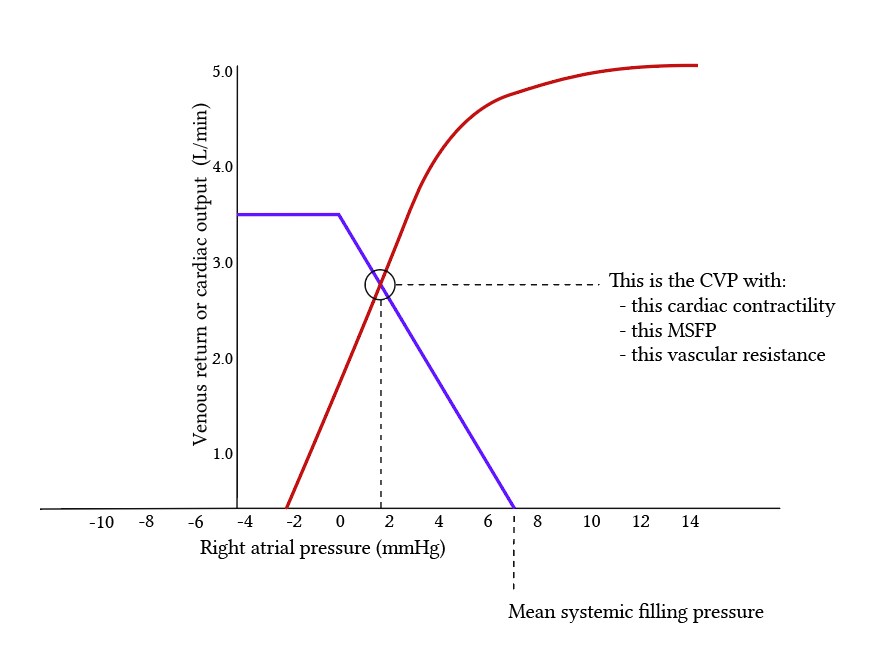 From the college comments to Question 6 from the second paper of 2019, "it was expected that answers include central venous blood volume, central venous vascular compliance, intrathoracic pressure and tricuspid valvular function". Some effort will be made to remix and recombine the Guytonian definition of the CVP to meet this expectation. At the same time, it would be wonderful if at least some of the ensuing discussion could remain attached to reality. Thus, in the discussion of the determinant factors, some attempt will be made to discuss the factors that affect the measured CVP, rather than just the abstract physiological variables.

The classification system for this list of factors is borrowed from Smith, Grounds & Rhodes (2005).  These authors created a particularly popular in their chapter for Functional Haemodynamic Monitoring (p101), and many other authors have also reproduced it, which makes it very likely that the college examiners came across it in the course of Googling up their written answer marking rubrics.

Central venous blood volume is usually listed as one of the determinants of CVP. This, in turn, depends on several factors, which can be interpreted using the cardiac and vascular function curve model of the circulatory system, after Arthur Guyton:

Elastance of the right atrium and greater vessels

The relationship of the pressure and volume in the central venous compartment is usually referred to as "central venous vascular compliance", even though elastance is probably a better term if one is specifically interested in looking at the change in pressure. This relationship is mainly affected by:

Properties of the tricuspid valve