This chapter is relevant to Section G4(ii) of the 2017 CICM Primary Syllabus, which expects the exam candidate to "describe the distribution of blood volume and flow in the various regional circulations ... including autoregulation". Numerous regional systems have themselves been the individual subjects of SAQs, and in fact this range of topics appears to be an area of priority for the CICM examiners. Observe the range of regional circulation questions from recent history:

So, the regional circulatory systems alone account for about 17% of the total range of cardiovascular system questions in the CICM Part One written exam, and most of the time one specific system becomes the main topic of the SAQ.

However, one time they took a break from directed questions, and looked for something general.  Question 12 from the first paper of 2014 asked candidates to "describe autoregulation within peripheral circulations". Pass rate was 8%. The examiners, un-self-critically, appeared almost surprised that "most candidates failed to fully comprehend the question", as if to them it had been worded perfectly, making abundantly clear their expectations. In fact, one may point out that each of the abovementioned regional circulation territories is a topic so vast and so unique that individual chapters were required to describe them, making it very difficult to wrap them all up into a single ten-minute answer. What would that even look like, one wonders?

Judging by the college answer, the real question should have been "describe the locally acting mechanisms which regulate blood flow and vascular resistance in the peripheral circulation without input from central vasomotor control or systemic humoral mediators". The examiners wanted us to "define and explain autoregulation", and to explain the mechanisms of myogenic and metabolic regulation of regional blood flow, namedropping some of the paracrine mediators such as adenosine, nitric oxide, endothelin, prostaglandins, and so on and so forth. Nothing regulatory which originates from central control (eg. sympathetic nervous system or humoral mediators such as vasopressin and angiotensin) was accepted. With these in mind, the following answer has been cobbled together to help the 92% of exam candidates who did not understand what the college wanted:

Clifford (2011) is the best modern account for this subject matter, and you can access it for free. If it has any flaws, it is that it is too long and detailed for a cursory glance. The article by Johnson (1986) is shorter, but older, and less detailed.

Autoregulation in general (forget blood flow for a moment) is "physiological processes in which an inhibitory feedback system counteracts change". Thus, autoregulation of blood flow is a system of physiological processes which counteracts changes in blood flow by inhibitory feedback. Giving credit to pioneering forefathers of cardiovascular physiology, one cannot help but quote William Maddock Bayliss (1902), who was first to describe this phenomenon:

"...The peripheral powers of reaction possessed by the arteries is of such a nature as to provide so far as possible for the maintenance of a constant flow of blood through the tissues supplied by them, whatever may be the height of the blood pressure, except so far as they are directly overruled by impulses from the central nervous system."

The latter definition is probably better, partly because it is easy to remember and includes all the relevant detail, and partly because Paul C. Johnson has presided over autoregulation research since the mid-1960s and is clearly one of the grand doyens in this area. Together with Waugh and Hinshaw, in 1963 he convened a 5-day symposium on autoregulation research during which most of the lasting definitions and nomenclature were established.

The term "myogenic" should generate in the reader an impression that this mechanism somehow originates in the vascular smooth muscle, and indeed that is the case. In a nutshell, it is muscle responding to being stretched by contracting. The result is a for of blood flow control: in the presence of increased flow, there is increased stretch, and the resulting constriction produces an increase in resistance and therefore restores the flow to its original level. To demonstrate the magnitude of the change, here is an annotated version of a graph from Schubert & Mulvany (1999), who reported on this mechanism in glorious detail. The data are from an artery in a rat tail, subjected to different levels of arterial pressure. 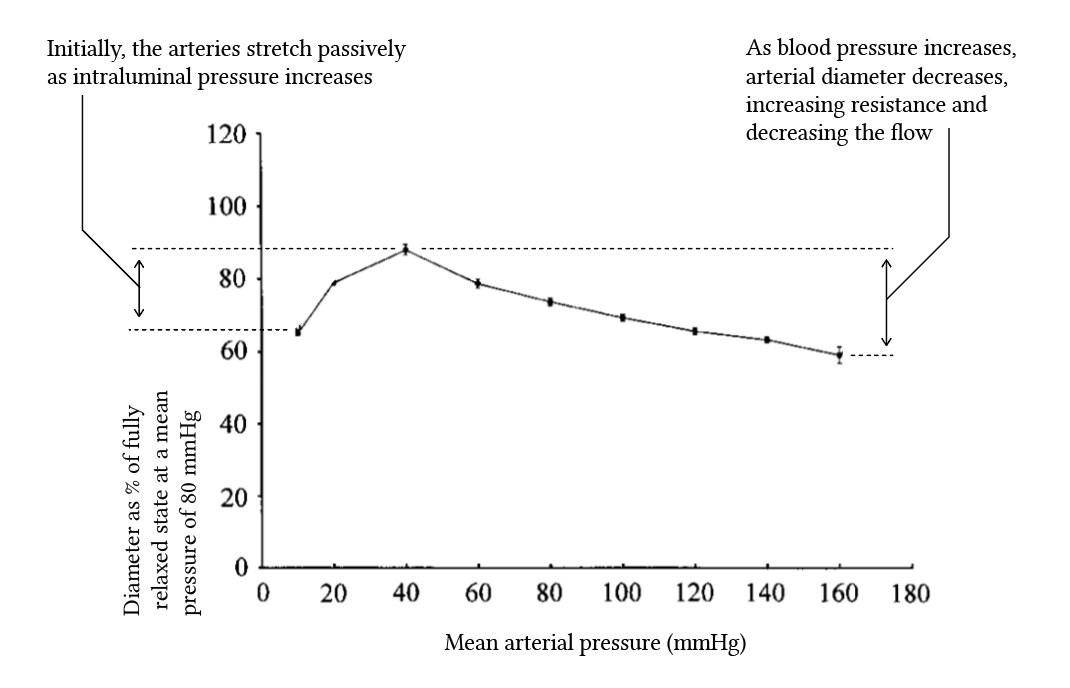 There is no soluble mediator or external control involved here; the muscle itself is responsible. This becomes apparent from multiple experiments where all the other vasoactive influences are eliminated; left to its own devices, the smooth muscle continues to behave in this manner. Meininger & Davis (1992) describe several settings where an intact myogenic response was seen even when the arteries were denuded of endothelium and fully blocked against sympathetic stimulus.

How does this work? There are many theories. It is clear that the smooth muscle must "sense" stretch by some very local mechanism. That mechanism then causes the muscle membrane to depolarise. The depolarization, in turn, opens voltage-gated calcium channels, and these channels allow extracellular calcium to enter the cell. The increase in intracellular calcium is the final common pathway of all vasoconstrictor stimuli, as it causes myosin light chain phosphorylation, and so the muscle contracts. The essential role of calcium is made rather clear by experiments in which it is eliminated from the picture. For example, the same diagram from Schubert & Mulvany (1999) also originally contained data collected from the same rat tails when they were bathed in a totally calcium-free solution. As you can see, in the absence of calcium, the increasing pressure just causes the arteries to dilate stupidly until they reach a sort of plateau. No clever regulation takes place; they are just passive conduits here. 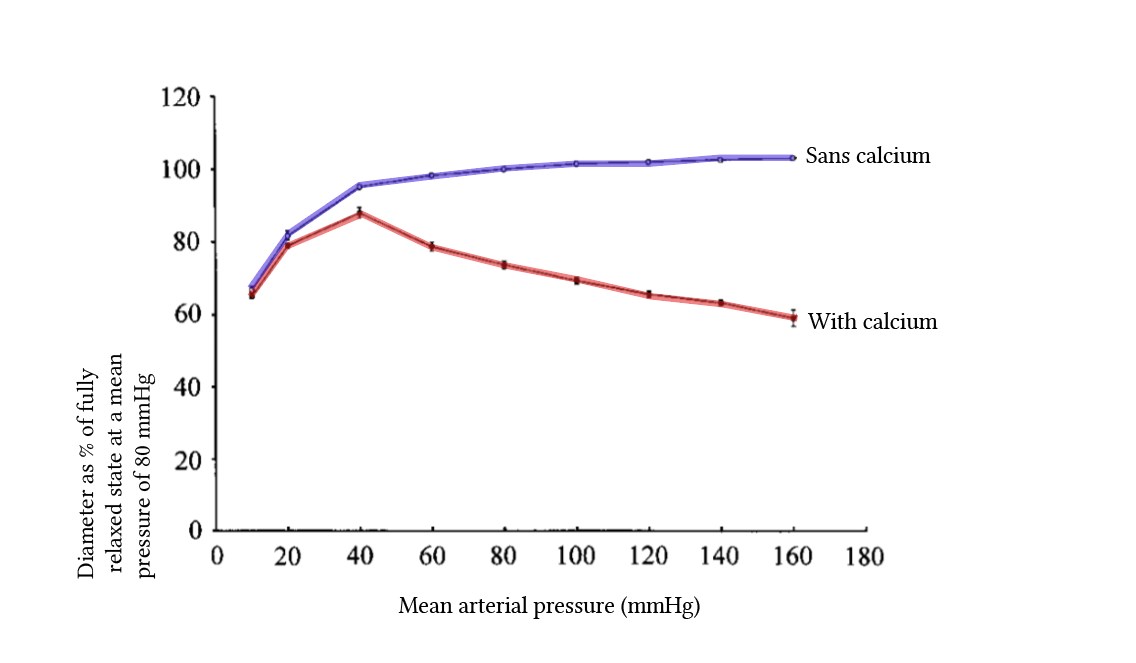 The main conundrum remains in determining the mechanism by which stretch is transduced into membrane depolarization. This riddle remains unsolved, apparently even today. Hill & Davis (2007) point to numerous possible candidates, including mechanosensitive ion channels and cytoskeleton components. It appears that transient receptor potential (TRP) family of cation channels is currently the frontrunner.

Metabolic regulation can be loosely described as "regulation of blood flow which is determined by metabolic demand"; i.e. the arterioles dilate in order to promote flow to the organ or tissue which suddenly requires more metabolic substrate. This mechanism is occasionally referred to as "active hyperemia" or "functional hyperemia". Realistically, the dilation seems to occur not to meet the increased demand for metabolic substrate, but as a response to the release of metabolic endproducts by the tissue, particularly the products of anaerobic metabolism released due to ischaemia. There are a large number of substances answering that description. A good list is offered by R.J Korthius (2011):

To be a plausible candidate for being a metabolic vasodilator, these chemicals must fulfil the following criteria:

When these criteria are applied to the abovementioned list of substances, it turns out that many of them do not satisfy them. Wild scenarios arise. For example, when Koller & Bagi (2002) occluded arteries denuded of surrounding muscle, they still dilated in response even though there were no parenchymal cells around to produce ischaemia-related mediators.

The strongest evidence for metabolic autoregulation seems to support potassium. It seeps out of exercising muscle, it becomes concentrated in the perivascular interstitium, it causes a dose-dependent vasodilation, and blocking its release attenuates the vasodilatory response (Clifford, 2010). Hydrogen peroxide release and hypoxia are probably the next most plausible factors.

Flow or shear-associated regulation is the phenomenon of proximal vasodilation in response to distal vasodilation. To put it in a less confusion form:

This response is relatively sluggish, as far as vasomotor reflexes go. According to Clifford (2011), it takes 30-40 seconds to reach a new baseline after a maximum distal stimulus has been applied. It is also highly variable between different vessel beds, suggesting that it has a different level of importance depending on which organ or tissue you are looking at.  The mediators released from the endothelium include nitric oxide, prostacyclin and EDHF (Endothelium-Derived Hyperpolarizing Factor, a mysterious substance or signal which appears to open potassium channels in vascular smooth muscle, allowing potassium to leak out of the cells along its chemical gradient resulting in membrane hyperpolarisation).

Conducted vasomotor responses represent regional control of one region by the vasomotor events of another neighbouring region. This is probably mediated by the electrotonic propagation of signals from one smooth muscle cell to another. Both vasodilation or vasoconstriction can propagate in this manner. Segal & Duling (1987), for example, vasodilated some 20μm hamster arterioles with acetylcholine, and found that larger, more proximal arterioles (120μm) also dilated, about 530 μm away (where the acetylcholine couldn't have possibly reached them).  This phenomenon was almost completely abolished by the administration of a hypertonic sugar solution, which shrinks the cells and makes them separate from one another, destroying gap junction interactions. Some sort of direct cell-to-cell transmission must be involved, the authors concluded. This phenomenon must have substantial functional significance; blocking gap junction transmission seems to severely impede the normal exercise-induced hyperemia of skeletal muscle.

The local release of vasodilating substances in the setting of infection or inflammation is clearly an important mechanism of regional vasodilation, and is discussed in detail elsewhere. In summary, these mediators include histamine, serotonin, prostaglandins E1 and E2, etc. etc. It is difficult to group this in the same chapter as "autoregulatory" mechanisms because these substances don't really mediate responses to changes in blood flow or local demand. However, if "local demand" can be interpreted as "I am infected tissue and I demand more neutrophils", then it might make some sense.

Bayliss, William Maddock. "On the local reactions of the arterial wall to changes of internal pressure." The Journal of physiology 28.3 (1902): 220.