This chapter is relevant to Section G4(ii) of the 2017 CICM Primary Syllabus, which expects the exam candidate to "describe the distribution of blood volume and flow in the various regional circulations ... including autoregulation... These include, but not limited to, the cerebral and spinal cord, hepatic and splanchnic, coronary, renal and utero-placental circulations". The reader is invited to regard the clause "not limited to" as basically a permission for the examiners to ask questions on any granular detail of cardiovascular esoterica. This time it was the skeletal muscle, but realistically this means anything is fair game.

Question 23 from the second paper of 2012 asked about the mechanisms that control regional skeletal muscle blood flow. The pass rate was 18.2%, which is understandable given that this topic is not mentioned in the syllabus and had never appeared in any of the previous papers. The examiner's comments were actually rather informative regarding the breadth and depth of the expected answer, and were used to guide the discussion below.

In terms of free peer-reviewed resources, the most detailed by far has to be the regulatory control chapter by Korthius (2011) from Skeletal Muscle Circulation. This chapter on its own would be more than enough to answer any potential CICM SAQs on this topic. Unfortunately, the amount of detail is so irresponsibly vast that one could not possibly recommend it to anybody as pre-exam revision.

The normal resting blood flow of a skeletal muscle which is doing absolutely nothing is said to be about 1-4 ml/min/100g. Or at least that's the range generated by studies which are usually performed on isolated muscles in animal models. For a representative example, Stainsby & Renkin (1961) measured a blood flow of around 2ml/min/100g in the gastrocnemius of the anaesthetised dog.

However, these numbers are almost certainly wrong. Unlike all the other organs where a physiology book might be able to confidently produce a factoid like "1000ml/min of goes to the kidneys", with muscle things are somewhat less straightforward because it is not one single organ and there is no single vessel which one might cannulate to measure the flow. As such, most of we believe about overall muscle blood flow is extrapolated from observing the behaviour of a single muscle, or a single group of muscle. And for the purpose of experimentation, the most conveniently available muscle groups seem to be in the legs of healthy young men, as they are conveniently supplied with one artery and one vein, and are often attached to highly suggestible individuals who readily sign consent forms. Andersen & Saltin (1985) did exactly this, measuring the blood flow to the quadriceps femoris of five young gentlemen, at different rates of exercise. As one can clearly see from their slightly mangled diagram below, blood flow to their quad (only one leg was tested) increased by a factor of three. 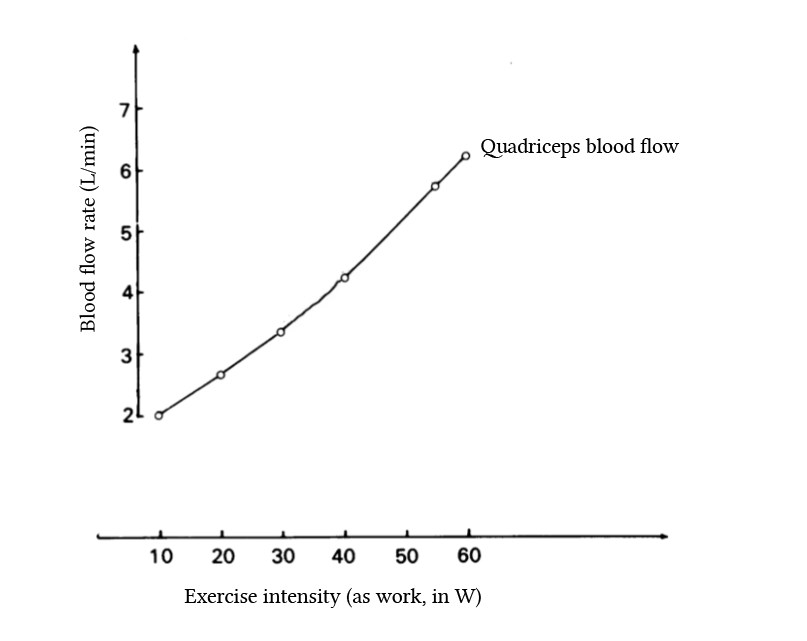 In case one finds it difficult to appreciate muscle workload when it is expressed in watts (W), it would be relevant to mention that the experiment protocol called for an increase in workload in 10-watt increments "until exhaustion", and none of the five subjects made it past 60W.  Richardson et al repeated a similar study in 1993 with sturdier subjects who could go up to 100W, and demonstrated that even in these extremes muscle blood flow still increases linearly in proportion to workload.

This brings us to the next most important point of this discussion: skeletal muscle blood flow scales massively to meet demand, more than any other regional circulatory system. A young Adonis on a cycle ergometer can crank up to a cardiac output of 30L/min, of which the vast majority (90%) ends up being distributed to their exercising muscles (Mortensen & Saltin, 2014). Regional tissue perfusion of muscle at that level of performance can increase to around 400ml/min/100g, which - for some muscle groups - can represent a 100-fold increase in blood flow.  And the blood flow response to exercise remains linear, which basically means that skeletal muscle can increase its capacity to accept blood flow far beyond the capacity of the heart to deliver it.

On the other end of the spectrum, the blood flow of muscle can be purposefully decreased, not in response to decreasing muscle demand but in response to the increased demand by other organs. Together with the skin and splanchnic circulation, the vascular beds of skeletal muscle act as a cardiovascular reserve, and blood flow from skeletal muscle can be redirected to nourish other more "vital" organs during times of haemodynamic stress. This was demonstrated with brutal clarity by Bond et al (1967). The investigators dropped the MAP of anaesthetised dogs down to 35-40 mmHg by draining most their blood volume into a bucket (well, about 20-30ml/kg of blood was removed, of a total 70ml/kg blood volume). As you can see from these slightly butchered data, in response the skin abruptly dropped its perfusion to basically zero, and muscle was not far behind: 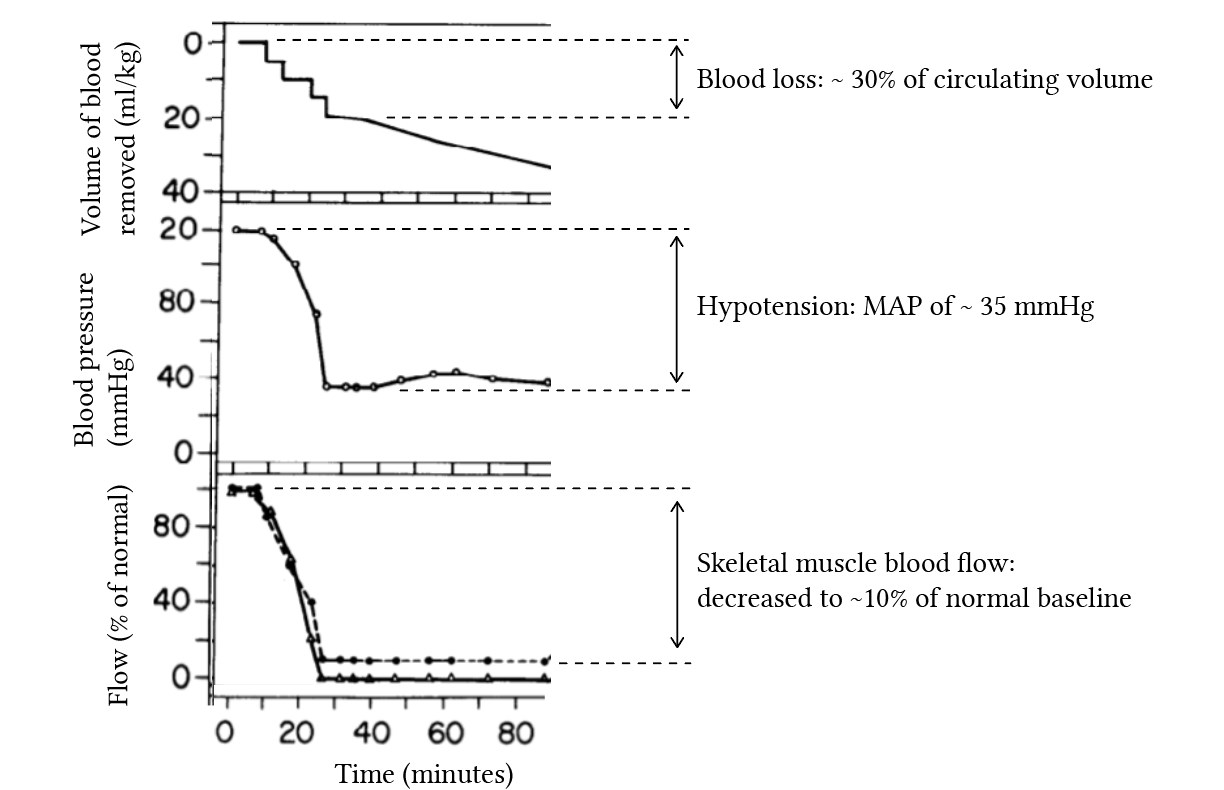 That "normal flow", in this case, was the resting blood flow to the relaxed skeletal muscle of an anaesthetised dog, which we already know is only something like 1-4 ml/min/100g. So with haemorrhagic shock, this was further reduced by approximately a factor of 10. In short, the regional circulation of skeletal muscle can alter its blood flow over three factors of magnitude, from 0.1 to 100 times the normal value. No other organ system is capable of this.

From the above, it follows that, in order to maintain their function, the regional circulation of muscle must be able to do three things, at minimum:

The maintenance of a stable blood flow is achieved mainly by means of intrinsic vascular mechanisms which are essentially the same for all blood vessels everywhere. Upregulation of flow to instantly meet increased demand during exercise is mainly managed by locally released vasodilators, of which some are the products of muscle metabolism. Lastly, the redistribution of blood flow away from muscle is managed by the autonomic nervous system and circulating catecholamines. This summary paragraph would probably not be enough for a CICM SAQ answer.

Like virtually every other regional circulatory system, the arterioles of skeletal muscle are able to control their blood flow by intrinsic pressure-responsive mechanisms. And yes, it generates a familiar-looking flow-pressure relationship curve. Here is one from the abovementioned Stainsby & Renkin study with the dog gastrocnemius: 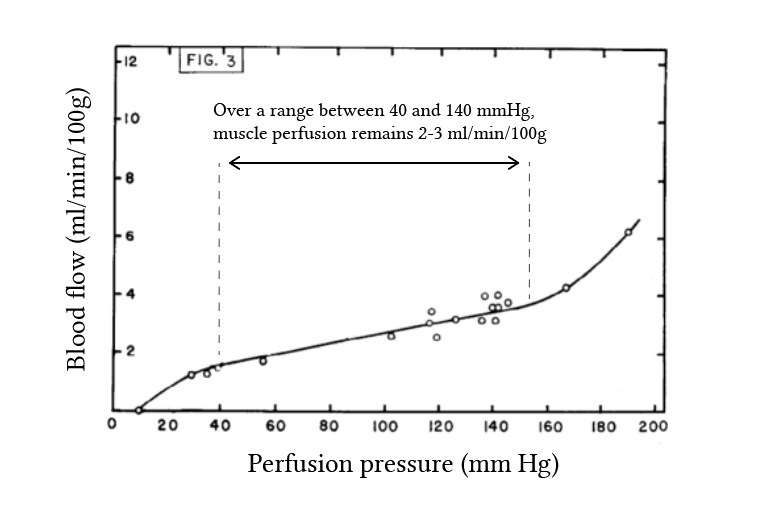 Without going into excessive detail (which would repeat the chapter on peripheral vascular resistance), this is an example of myogenic regulation, which is a calcium-related affair. Some sort of stretch-triggered mechanism (which remains unclear) produces an influx of intracellular calcium, triggering vasoconstriction and thereby counteracting the stretch stimulus. This appears to be an intrinsic property of vascular smooth muscle, insofar as a vessel still performs this trick even when denuded of endothelium. It also appears to be easily overridden, as vascular smooth muscle still dilates readily in response to exercise.

As already mentioned, there is clearly some sort of demand-related mechanism involved in the control of vascular resistance of skeletal muscle arterioles. The byproducts of muscle metabolism are convenient regulatory mediators for this purpose, as their regionally increased concentration suggests a spike in demand for metabolic substrate. Following from this, one might expect molecules like CO2  to act as vasodilators in the circulation of skeletal muscle. Their presence in the perivascular interstitial fluid should relax the vascular smooth muscle.  Similarly, the lack of metabolic substrate (eg. oxygen) should produce vasodilation.

Empirically, this appears to be the case. Stowe et al (1975) tortured a denervated muscle with electricity to simulate exercise, and, to be sure, it produced some hypoxic acidotic venous blood (pH 7.20, pO2 19 mmHg). This blood was then collected and funnelled into the arteries of a previously unmolested muscle, which has been resting peacefully. Vasodilation occurred. If the returned blood had previously been restored to a normal pH and oxygen concentration, the vasodilation was not observed.

CO2 also seems to have this effect. Kontos et al (1971) perfused muscles with CO2-rich blood and determined that there was a strong linear relationship, with perfusion pressure to the muscle dropping by 50% at a CO2 of around 80 mmHg. Hydrogen peroxide (H2O2), the necessary product of mitochondrial oxygen use, has also been identified as a vasodilator in skeletal muscle (Marvar et al, 2007). Numerous other factors have been listed by textbooks, including lactate, osmolarity, and potassium ion concentration, but these are usually mentioned without any references in an infuriating disregard of bibliographic conventions.

Numerous vasoactive mediators released by the vascular endothelium have been shown to affect the arteriolar tone of skeletal muscle, and these should probably be listed among the regulatory molecules. These include:

If this looks like a generic list of vasodilator molecules, that is because that's exactly what it is. One cannot, with a straight face, say that these substances are somehow unique to skeletal muscle, or that they play some sort of essential role in its remarkable capacity to change its blood flow. For example, clearly nitric oxide vasodilates skeletal muscle arterioles, as it dilates all arterioles, but it is not clear how it fits into the overall system of muscle blood flow control. For example, it does not appear to be essential for exercise-induced hyperemia. Radegran & Saltin (1999) inhibited the production of NO and found that blood flow still increased during exercise in a fairly normal fashion. Something similar has been found for all the other listed mediators, trivialising their role in the grand scheme of skeletal muscle blood flow regulation. Still, they exist, they dilate, and they get mentioned in official publications, which makes them essential for the CICM trainee, as they will probably be listed on the marking sheet in some viva somewhere.

All those cruel dog gracilis experiments mentioned above have generally had to use a denervated muscle. This is because the nervous system, specifically the sympathetic nervous system, plays a major role in the control of skeletal muscle blood flow. Skeletal muscle arterioles are well supplied with adrenergic fibres, and they extend along the progressively narrowing vessels for as long as those vessels have any smooth muscle (Saltzman et al, 1992). In contrast, muscle capillaries and venules don't seem to have much sympathetic innervation, if at all.

This sympathetic innervation is responsible for some of the normally high arteriolar tone which is observed in resting muscle. Basically, in the absence of this mechanism, muscle arterioles would dilate irresponsibly, and supply pointless luxury perfusion to an organ which has no need for it. Chen et al (1991) observed that small arterioles tended to increase in diameter by about 20% when these nerves were cut, over a rather short time course (5-15 minutes).

These circulating catecholamines can also produce skeletal muscle vasodilation. Recall that it is only noradrenergic stimulation of α-1 receptors that leads to vasoconstriction. However, muscle arterioles also have β-2 receptors, which produce vasodilation, and adrenaline is a rather potent β-2 agonist. Barcroft & Cobbold (1956) infused the forearm muscles of healthy volunteers with 10mcg/min of adrenaline and found that blood flow basically tripled, from about 4ml/min/100g to about 12 ml/min/100g: 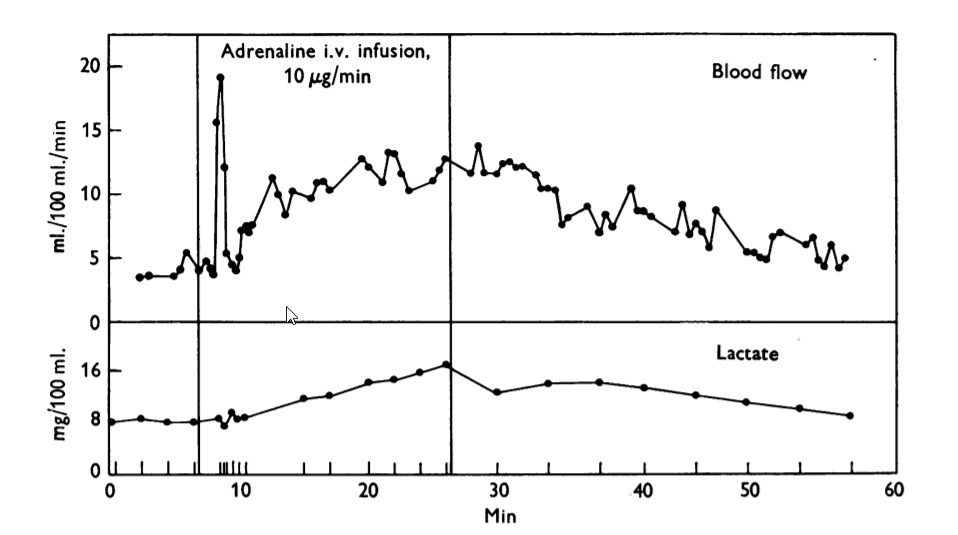 This seems to work in support of the long-outdated "fight or flight" model of the autonomic nervous system. When being chased around by various sabretooth cave sloths, our ancestors may have benefited from the increased muscle blood flow generated by their panicked adrenal glands, it is speculated. Circulating catecholamines also help by increasing cardiac output to the superhuman levels seen in young athletes. In short, beyond vasoconstricting skeletal muscle vessels, the sympathetic nervous system can also increase muscle blood flow by direct and indirect mechanisms.

Radegran, G., and B. Saltin. "Nitric oxide in the regulation of vasomotor tone in human skeletal muscle." American Journal of Physiology-Heart and Circulatory Physiology 276.6 (1999): H1951-H1960.