This chapter is relevant to Section G4(ii) of the 2017 CICM Primary Syllabus, which expects the exam candidate to "describe the distribution of blood volume and flow in the various regional circulations ... including autoregulation... These include, but not limited to, the cerebral and spinal cord, hepatic and splanchnic, coronary, renal and utero-placental circulations". The specifics of the uteroplacental circulatory system have never really emerged as a dominant theme in the CICM primary. They were asked about only once, in Question 9 from the first paper of 2018, and only as a sub-question worth 20% of the marks.

Wang & Zhao (2010) have an entire book on the vascular biology of the placenta, in case anybody wants to hyperfocus on this subject, and all of it is free. Only Chapter 2 is really relevant for exam revision, and it is thankfully brief. For uteroplacental blood flow regulation, Carter (1999) is the most comprehensive entry, but not available as full text.

Structure of the uteroplacental circulation during pregnancy

Normally, the uterus is supplied with blood by the anastomosis of the uterine and ovarian arteries, which join in the middle to form a plexus of arcuate arteries which wrap around the uterus. From these, penetrating radial branches are sent into the uterine muscle, which transition to decidual spiral arteries. According to Cunningham et al (2005), at term there are about 120 of these spiral arteries. From there, the maternal blood spills into the intervillous space. There are some outstanding diagrams to illustrate this vascular territory, but none is more picturesque than this drawing by Ranice Davis Crosby (1963): 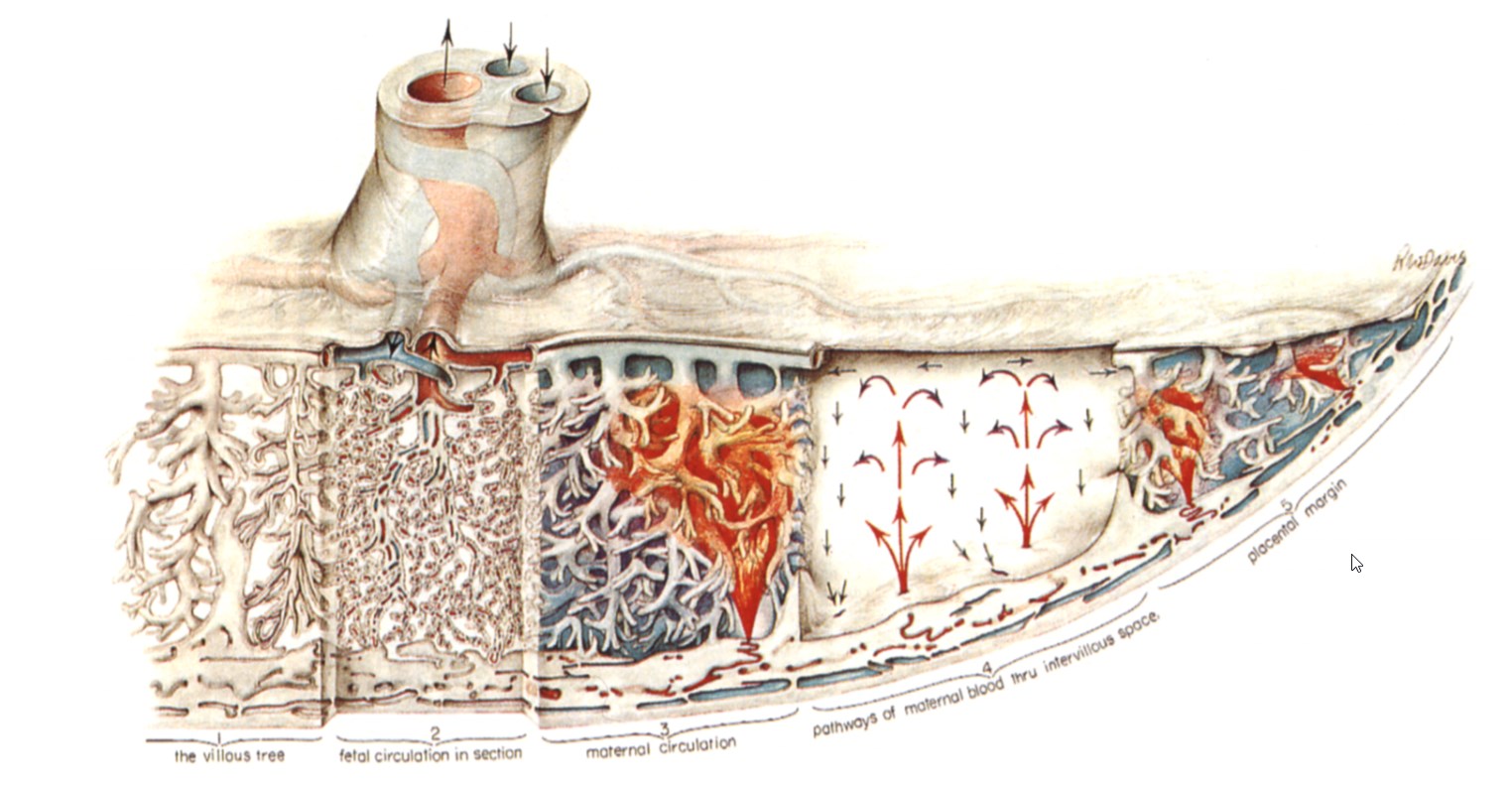 A schematic would be less visually interesting, but would be easier to reproduce in the exam setting, and is therefore probably more useful from an exam perspective:

This intervillous space is basically a vast blood-filled cavern which contains about 500ml of blood at term. Into this cavern, the tertiary chorionic villi - branching processes of the syncytiotrophoblast -extend like hungry grasping pseudopods. These processes are highly vascular, allowing for gas exchange between the foetal blood and the pool of maternal blood in the intervillous space. This is probably difficult to visualise, so here is an excellent stylised diagram from Gray's Anatomy (1918) paired with an equally excellent microscopy drawing stolen from the PoJa collection: 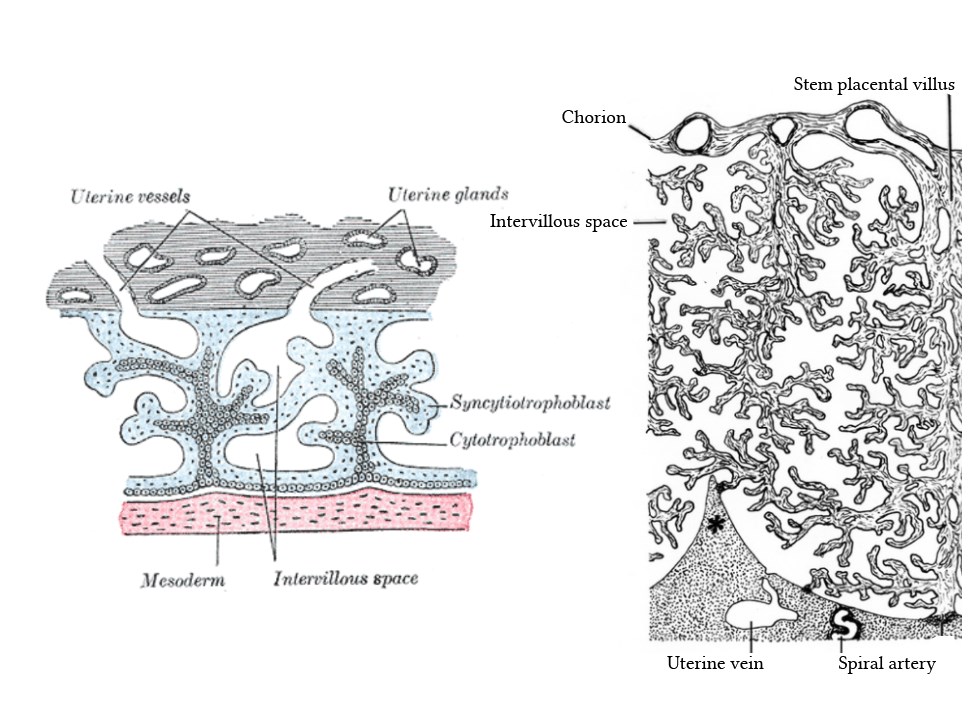 Those numerous interdigitations form gradually over the course of pregnancy, and the structure here (lovingly sketched with ink from low-magnification microscopy) is what things look like at term.  At this stage, the maternal blood pool in the intervillous space interacts with the foetal bloodstream over a topologically complex surface with an area of approximately 12m2 (Wang & Zhao, 2010). Arterial pressure pushing blood into this space also provides enough pressure to push it out again, and it is taken up into uterine veins, draining into a uterine venous plexus on either side of the cervix. From there, the final destination for this blood is the internal iliac veins.

The blood supply of the uterus is normally about 200ml/min, or about 3-4% of the total cardiac output. This figure quadruples at term. Thaler et al (1990) measured these changes over the course of several normal pregnancies using transvaginal ultrasound, and determined that at the end of the third trimester the diameter of the uterine arteries more than doubled (up to 3.7mm), and the blood flow rate increased to about 700ml/min, or about 14-15% of the normal cardiac output. About 90% of this blood flow nourishes the placenta, and the rest of it supplies the hypertrophied myometrium. The diagram below is a concatenated hybrid of two chart representations of the data from Thaler et al: 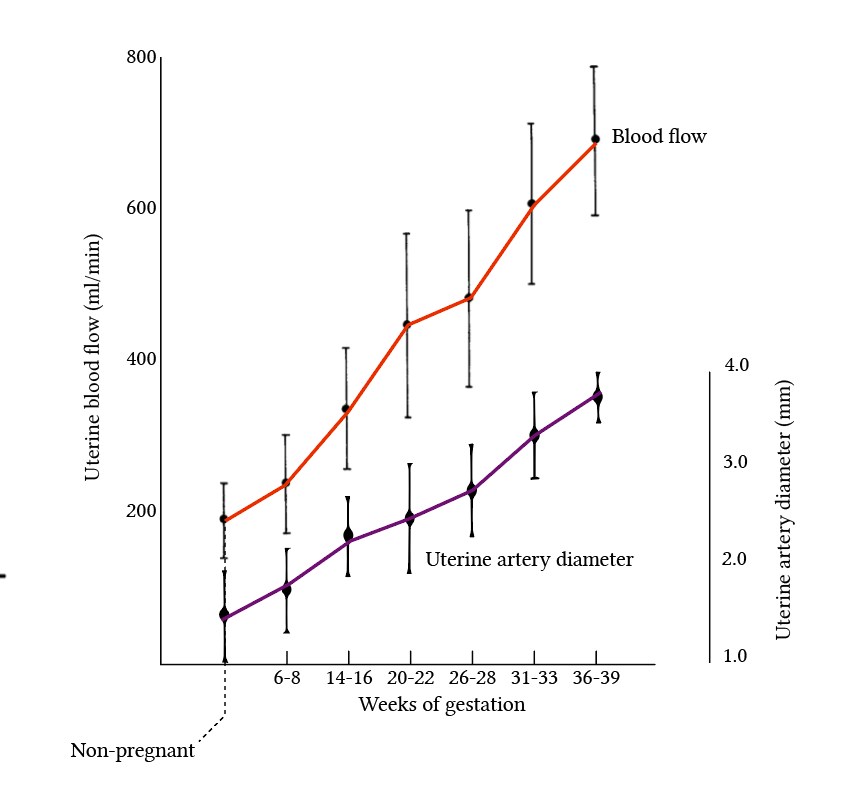 Obviously, for a large vessel to double in size like that, some sort of fairly drastic remodelling must take place. Osol & Mandala (2009) describe all sorts of major pregnancy-related changes in the collagen content and wall musculature of existing uterine arteries, in addition to accelerated angiogenesis which massively increases the total crossectional area of this regional circulation. The spiral arteries specifically end up having their walls replaced with trophoblast, and dilate by a factor of ten.

The increased total vascular diameter and decreased wall muscle content all lead to a substantial drop in vascular resistance, and at the end of it, the pressure and velocity of blood flow through the intervillous space ends up being quite low, about 8-14 mmHg according to Moll et al (1974).  It helps that there are no fine arterioles on the way to the placenta (as they are usually the vessels responsible for most of the vascular resistance). This is good: the pressure in the intervillous space needs to be quite low, otherwise the maternal bloodstream will put direct pressure on the foetal bloodstream.  On the other hand, it needs to be higher than amniotic fluid pressure, which is about 7mmHg (otherwise, flow into the intervillous space would cease). Ergo, the mean pressure in the spiral arteries of the uterus is about 12mmHg, according to experiments performed on some pregnant Rhesus macaques.

The heading might sound authoritative, but in fact, to quote Carter (1999),

"We do not know for certain that the maternal placental circulation is under physiological control."

That is a pretty serious statement to make, and yet it is basically true. It is not clear that there is any direct regulatory control over placental blood flow, apart from the pregnancy-associated gradual structural remodelling. The uteroplacental circulation is without arterioles, which would usually be the regulatory resistance vessels in any other circulation. The spiral arteries are uselessly flaccid, and entirely devoid of any autonomic innervation (Khong et al, 1997), and moreover they are so maximally vasodilated at term that so further vasodilation is possible, so those aren't regulating anything either. The task of regulating uteroplacental blood flow therefore falls to the radial arteries of the myometrium, which do have a substantial autonomic fibre supply, but it is not clear what the point of this is, as the effect of stimulating them is minimal.

Those autonomic nerve fibres which supply the uterus have a significant sympathetic component, which is said to account for the famous sensitivity of the gravid uterus to noradrenaline. This sensitivity is probably somewhat overhyped.  Steele et al (1993) found that yes, uterine arteries were more responsive to noradrenaline (particularly with the endothelium removed), but the increase in responsiveness was modest (~3% vs. ~10% of maximal contraction, at the same noradrenaline dose).

Apart from autonomic factors, several other vasoactive mediators have some effect on the uterine vessels. Thromboxane A2 and endothelin-1 are both potent vasoconstrictors of uterine vessels, with the former released from platelets and the latter from the vascular endothelium. Vasopressin and angiotensin have minimal effect on uterine vessels at "normal" physiological concentrations but act as vasoconstrictors at-low-moderate doses (Carter & Göthlin, 1970).

At this point, it would be important to separate "blood flow regulation" from "things which affect vessel resistance in sufficient doses". The abovementioned effects don't seem to make much of a difference on uteroplacental blood flow under normal circumstances. Still, they are probably worth mentioning, in case anybody ever needs to reproduce a list of them. Here is a convenient one from Greiss & Greiss (2008).

So, the uteroplacental circulation does not appear to have the same sort of regulatory mechanisms as, say, the cerebral circulation, or the coronary vessels. Instead of vasoconstricting or vasodilating in response to changing flow conditions, these blood vessels act as dumb conduits, and flow through them increases (or decreases) linearly, in proportion to pressure. This graph from Greiss (1966) speaks volumes: 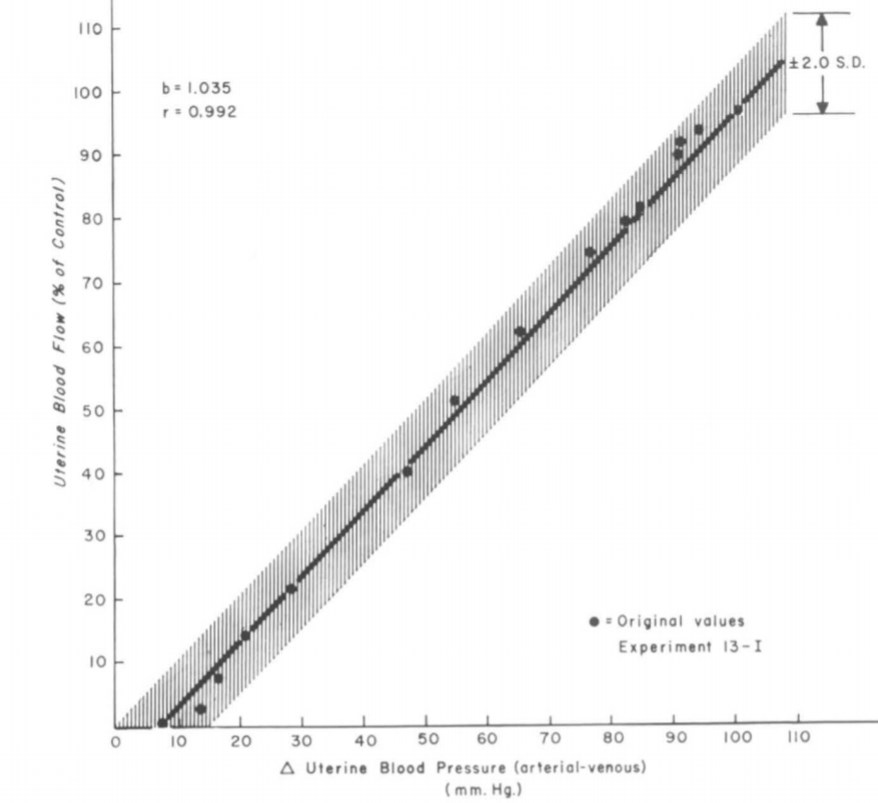 Thus, the uteroplacental complex has no way of increasing its blood flow when blood pressure decreases.  In this case, it has no option but to increase its oxygen extraction ratio. This is exactly what we find in empirical data; for example, Clapp (1978) had observed that the arteriovenous oxygen content difference (i.e. the oxygen extraction ratio) basically quadruples as uterine blood flow decreases: 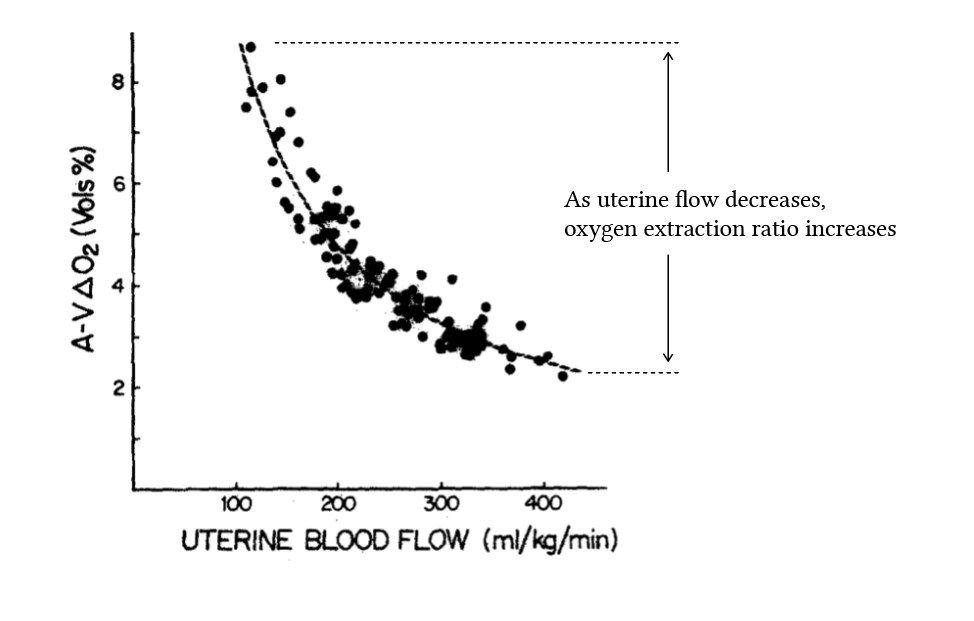 Clapp III, James F. "The relationship between blood flow and oxygen uptake in the uterine and umbilical circulations." American Journal of Obstetrics and Gynecology 132.4 (1978): 410-413.