Portal systems in the regional circulation

This chapter is probably relevant to Section G4(ii) of the 2017 CICM Primary Syllabus, which expects the exam candidate to "describe the distribution of blood volume and flow in the various regional circulations". Or at least this is the only syllabus item which seems to fit Question 9 from the second paper of 2011, which asked for a definition of a portal system, and "the anatomy and function of three portal systems in the body". The college answer was a spectacular model of assessment design, in the sense that it appears to actually answer the question without digressing overmuch on the topic of candidate underperformance (pass rate was 32%).

By far the best article for this topic has turned out to be an old paper by Henderson & Daniel (1978). At least in terms of portal systems listed, these authors win hands down (most others only mention the hepatic renal and pituitary systems).

Definition of a portal system

According to the examiners,

This is a verbatim quote from Dorland's Illustrated Medical Dictionary. As the examiners use these definitions to write the exam questions,  from the perspective of the exam candidates no higher authority exists. Other heretical versions also exist. From the fringe:

"what characterizes portal circulations is that they possess two serial capillary beds (supplying different cell types) that are not separated by the heart."

According to Henderson & Daniel (1978), we really need to find a better term to describe these systems, as "portal" really doesn't refer to any aspect of their anatomy or function, and is apparently a term we have borrowed from Etruscan haruspicy, where it referred to the hepatic vascular pedicle as the "gateway" to the liver.

Anyway, that aside, it becomes clear that essential structural elements of a portal system are:

Thus, it is possible to describe these systems by means of a childish diagram, variations on which will be repeated here for each system.

The hepatic circulation is discussed in greater detail elsewhere. In short, it has The portal system, from which the discussion of all other portal systems is prototyped. The best legitimate peer-reviewed resource for this would probably have to be Granger et al (2011).

The function of this portal system is to collect the blood from the absorptive capillaries of the gut and to convey it to the liver, where it can be distributed along the vast surface area of the hepatic sinusoid capillaries. There, so many things happen that it is difficult to summarise them. One might wrap everything up in the statement that portal blood undergoes metabolic and immune modifications in the hepatic sinusoid, which allow for the biotransformation of drugs or metabolic substrates and the clearance of pathogens. That blood is then returned into the systemic circulation via the hepatic veins.

Page (1986) and Daniel (1966) give good overviews of this strange little circulatory system. In effect, there are two portal circulations here, which both drain into the same secondary capillary bed. The old paper by Popa & Fielding (1930) in which this system was first described contains a spectacularly detailed anatomical diagram, which is quite visually effective but unfortunately too confusing for the exam candidates. So instead you get this: 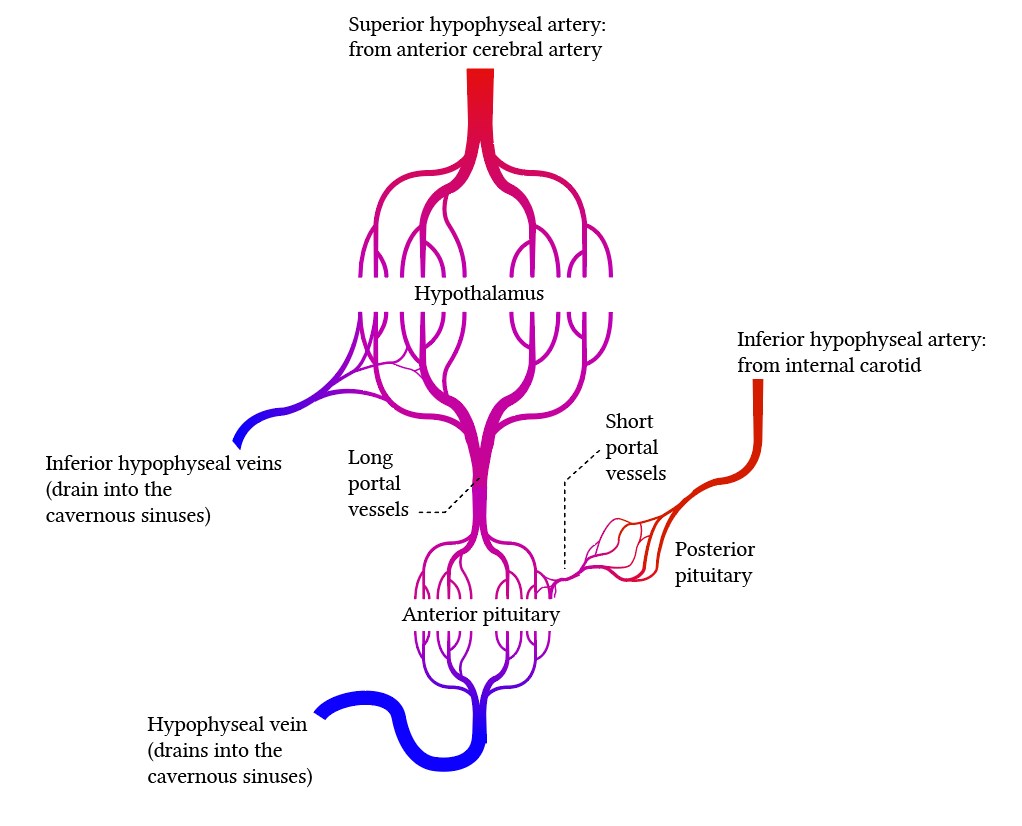 The function of the pituitary portal circulation is to act as a conduit for the quick transport of hypothalamic hormones into the anterior pituitary gland. The capillaries in the portal system are fenestrated, which means that relatively large substances can get through with relative ease. This is important, as may of the hypothalamic hormones are quite large - as an example, GHRH is a 44-amino-acid peptide and CRH is a 41-amino-acid peptide.

The use of a portal system here makes perfect sense for a number of reasons. In order to diffuse effectively into the anterior pituitary cells, these signalling peptides need to be present in relatively high concentration (as without a decent concentration gradient these substances would never cross the membranes). However, the hypothalamus is just a minuscule lump of neuroendocrine tissue, and would be incapable of pumping out the vast quantities of hormone molecules which would be required to achieve a high systemic blood concentration. In any case, that would be highly wasteful, as there are no systemic targets for these substances. Ergo, having these portal vessels allows the efficient delivery of concentrated hormones directly to the pituitary.

The renal portal system appears in the examiners' comments for Question 9 from the second paper of 2011, but its position in the list of portal systems appears to be contested. This is probably because the mammalian kidney lacks a "proper" portal venous circulation which is seen in fish birds and reptiles. Those guys get a portal vein which arises from other veins in the back half of the body (draining the tail, lower abdomen, sex organs, etc). That vein connects directly to the peritubular capillaries to the kidney, which gives rise to fascinating pharmacological phenomena. For example, when injecting drugs into the posterior bodyparts of a reptile, portal venous drainage may result in much of the substance being cleared by the kidney before reaching the systemic circulation, which may lead to a life-threatening standoff with an incompletely sedated crocodile.

The point of this portal venous system in the lower vertebrates appears to be to make available an alternative low-pressure blood supply system for the kidney, which increases the capacity of the kidney to reabsorb water and electrolytes. It is well-developed in fish and amphibians, diminished in significance in birds and reptiles, and abandoned entirely in mammals.

Anyway: this arrangement has still left mammals with a "portal system" of sorts, though it is not included in every list of portal systems (whereas for the splanchnic and pituitary circulations there is no controversy). It consists of the glomerulotubular circulation as the primary capillary bed, which forks into secondary capillary beds (vasa recta and peritubular) via afferent arterioles which act as the portal system: 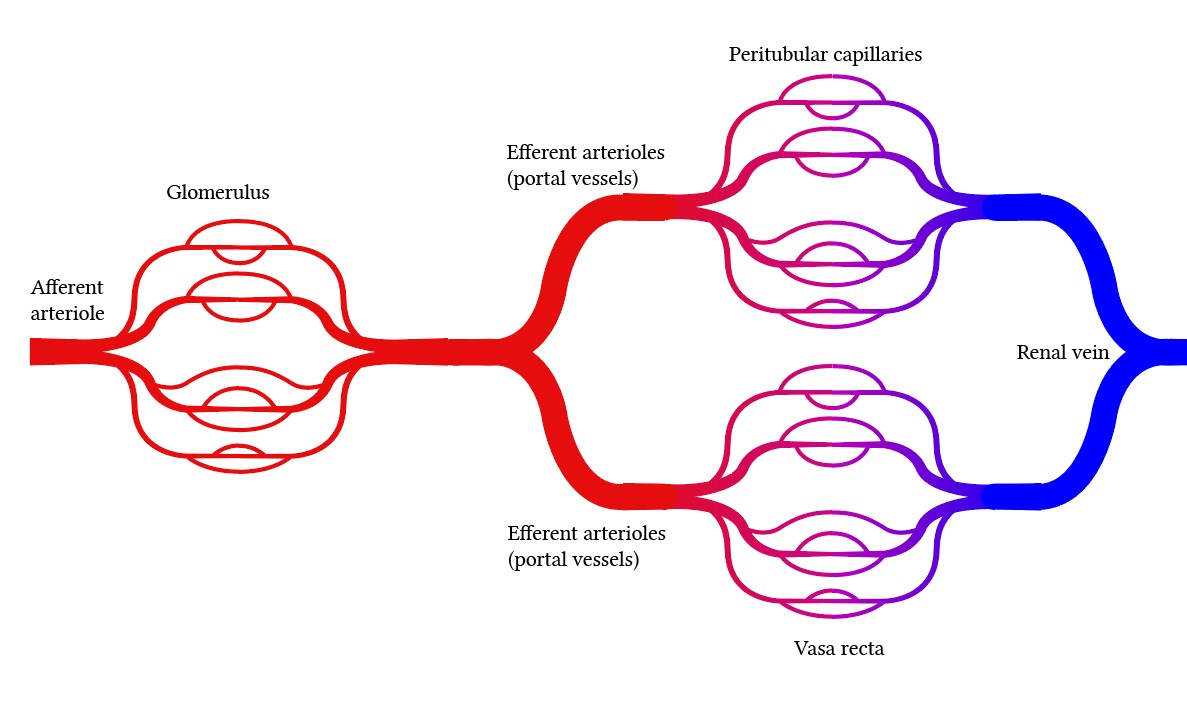 The functional purpose of this portal circulation is to reclaim water and solutes from the glomerular ultrafiltrate fluid. The peritubular capillaries do most of the solute reabsorption also supply actively excreted solutes to the proximal tubule. The vasa recta, on the other hand, are responsible for the maintenance of concentration gradients in the renal medulla, and are therefore essential for the kidney's ability to reabsorb water.

This is occasionally listed alongside the other portal systems, because it technically fits the definition (i.e. there are two capillary beds connected by a vessel without passing through the heart in between).

If one had to summarise the purpose of this portal system, one would have to admit that it is mainly there to allow the foetus to steal nutrients and oxygen from the mother.

Various other portal-ish circulatory regions exist, but they are generally not mentioned in mainstream textbooks. They will be listed here for completeness, but the trainees are cautioned not to mention them in written answers or vivas, as this may be viewed as heretically countercultural. Henderson & Daniel (1978) mention several such systems, such a the ovarian and testicular portal circuits, as well as adrenal and pancreatico-acinar portal systems. Not all of these have "primary" capillaries, and not all of them have been demonstrated in humans or even primates, making it difficult to write about them with a straight face.

Page, R. B. "The pituitary portal system." Morphology of Hypothalamus and its Connections. Springer, Berlin, Heidelberg, 1986. 1-47.

Popa, Gregor, and Una Fielding. "A portal circulation from the pituitary to the hypothalamic region." Journal of anatomy 65.Pt 1 (1930): 88.