Function of baroreceptors and clinical relevance of the baroreflex

This chapter is probably relevant to Section G5(ii) of the 2017 CICM Primary Syllabus, which expects the exam candidate to "describe the function of baroreceptors and ...relate this knowledge to common clinical situations". This is a separate syllabus item, distinct from Section G3(vi),"describe the cardiac reflexes".  It was also the subject of Question 16 from the second paper of 2014 and Question 8 from the second paper of 2007, which asked the trainees to explain or describe the role of the baroreceptors in the control of blood pressure.  Thus, the baroreflex got its own dedicated page. All the other less popular cardiovascular reflexes, as well as the cellular mechanics involved in the stretch-sensitive mechanoreceptors, are banished to the generic "cardiac reflexes" chapter.

Neurology of the baroreceptor reflex arc

In most diascussions of cardiac reflexes, the baroreflex is usually discussed first, not only because it is more "important" (some might say everything is important) but also because it is probably the best known reflex, and it has been known for the longest time.  This also means the author can indulge his fascination with old-school physiology papers.  Spyer (1981), though it was published forty years ago, is still the most useful comprehensive overview of this topic (102 pages!). A couple of extra decades here or there are not particularly important, as the neural pathways for this reflex were first discovered in 1852 (Estañol et al, 2011) and the behaviour of the reflex was fully described by the 1970s (looking at review articles like Kirchheim, 1976). If we had to force this concept into some brutally stupid exam-focused matrix, it would look like this:

A crude schematic is probably in order, particularly if it is an excuse to draw squidlike neurons and flaunt some beautiful anatomical art by Joseph Maclise (1841). 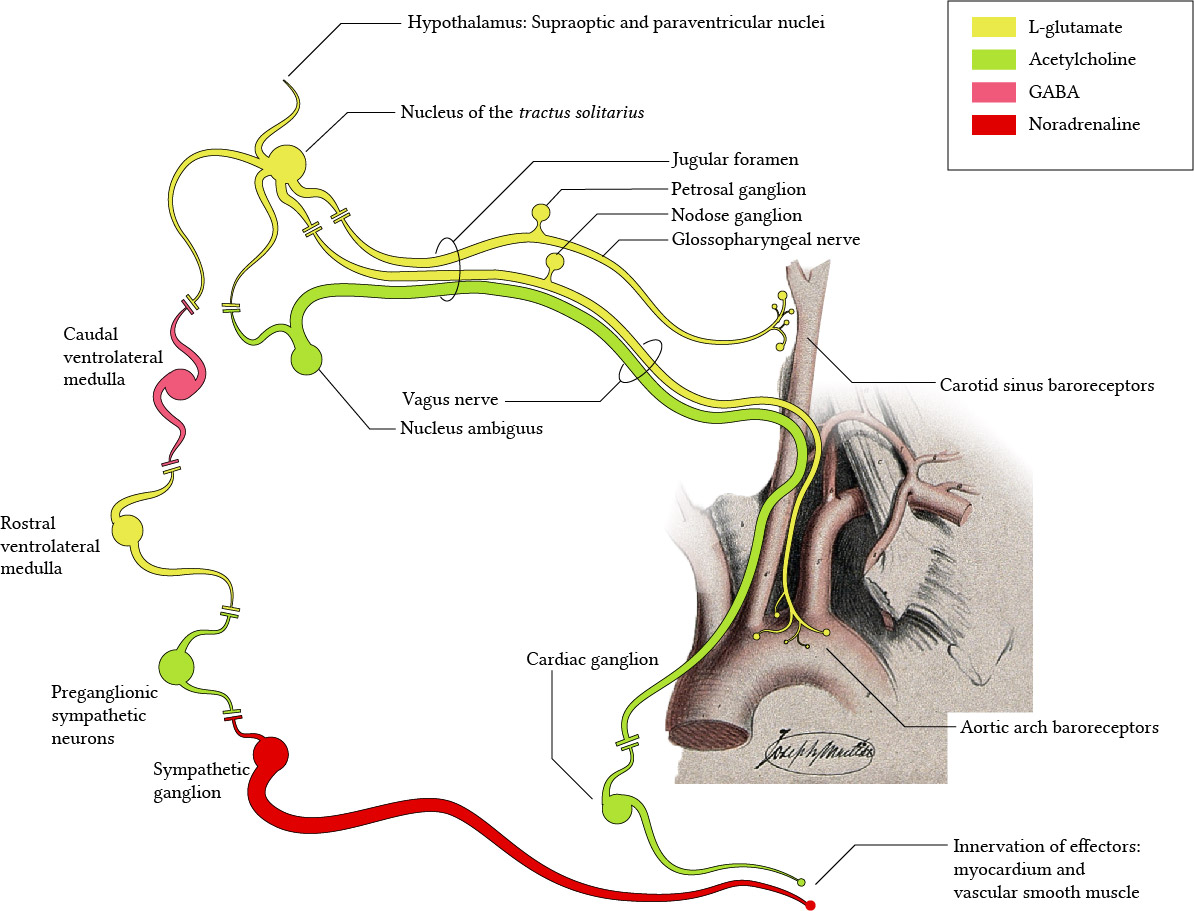 There is probably some merit in walking through this in some detail. This reflex arc is a fairly fundamental property of the human cardiovascular system, and one might be forgiven for dwelling on it for a minute. According to Spyer (1981), much of what we know about it seems to have come from animal experiments, and the favoured method of tracking the neural pathways has generally been to sever the nerve proximally, demonstrate the abolition of the reflex, and then to track the degeneration of the axons to see where the fibres lead.

The carotid sinus, anatomically, is a small neurovascular structure located at the dilated portion of the common carotid artery (the "carotid bulb"), just at the point of its bifurcation. It is not to be confused with the carotid body, which is a PaO2 / PaCO2 sensing chemoreceptor at the same location. For lack of a dirty limerick, to help their memory trainees may recall the alliteration that sinus senses stretch, and body senses breathing. The sinus itself is just a bundle of nerve endings which is located in an area of thickened adventitia around the carotid bulb. This image from Porzionato et al (2019) was disgracefully vandalised to demonstrate the thinning of the (pink) arterial media and the thickening of the (purple) adventitia, all the better to bring the nerve endings closer to the arterial lumen (as the nerve endings are mainly seen at the medio-adventitial junction). The silver-stained nerve endings are dark brown. 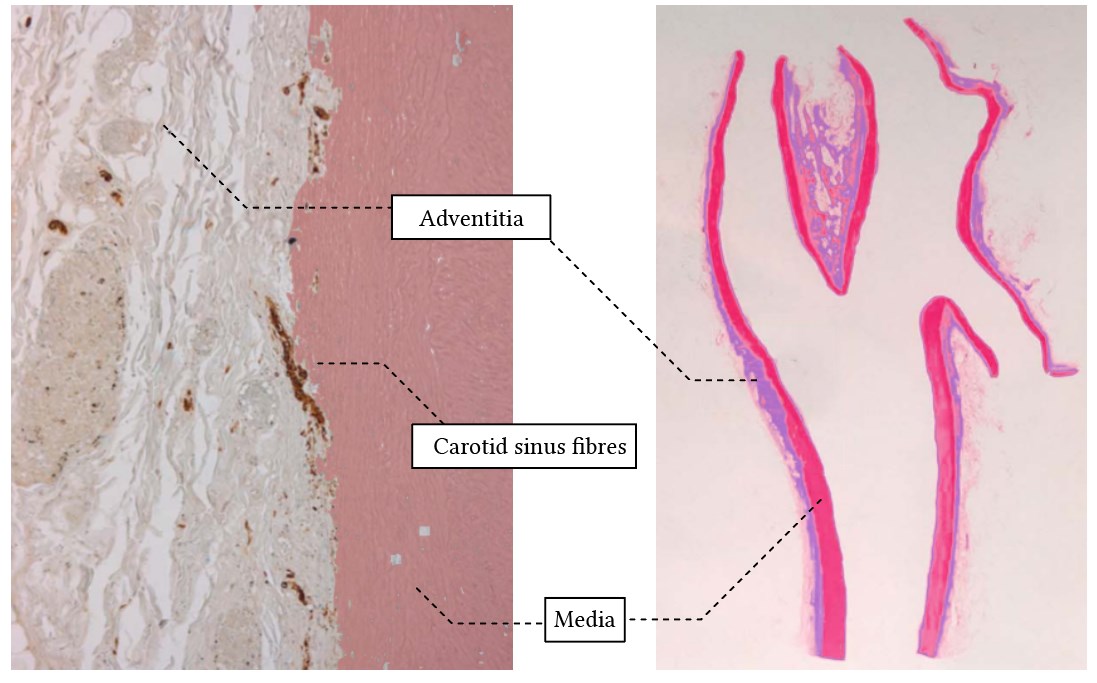 So. The carotid sinus receptors sit in the adventitia on the outer edge of the dilated common carotid, whereas the carotid body (glomus) is the pea-shaped structure nestled into the bifurcation of the vessels. The exact area covered by these mechanoreceptors is probably quite variable, as is the actual location of the dilatation (West et al, 2018). Generally, it is assumed that the entire surface of the dilatation is well-innervated, i.e. that whole 2-3cm segment of artery is the mechanoreceptor complex, rather than any specific discrete patch. That probably has clinical significance; when you massage the carotid sinus, your fingers do not need surgical precision.

Now that we have already discussed the mechanism of signal transduction in stretch-sensitive mechanoreceptors, to reveal other mechanoreceptor areas should be straightforward from a narrative perspective. What if baroreceptors, except aortic? From a purely mechanical point of view, these sensors are exactly the same as the ones in the carotid bulb. In fact, as they are closer to the heart, one might expect them to be more important in the regulation of blood pressure.

From an ultrastructural point of view, these receptors seem to obey the same rules as the carotid receptors: they sit in at the medio-adventitial junction.  Their distribution seems to be somewhat variable. The most commonly studied subjects for aortic baroreceptor experiments have been rats, mice, rabbits and cats, who all have slightly different areas of distribution. Human data seems difficult to track down. If we extrapolate from animal studies (Aumonier, 1972), we would expect the aortic baroreceptors to be found in the area of the aortic arch, mainly confined to a "saddle-shaped" area between the brachiocephalic trunk and the origin of the left subclavian.  This patch of sensors is not a circumferential area, i.e. it only wraps around about half of the aortic arch. The aorta is also not the only site for such mechanoreceptors: Aumonier found receptor tissue in various patches, all the way up and down the proximal greater vessels, including along the carotid and subclavian arteries: 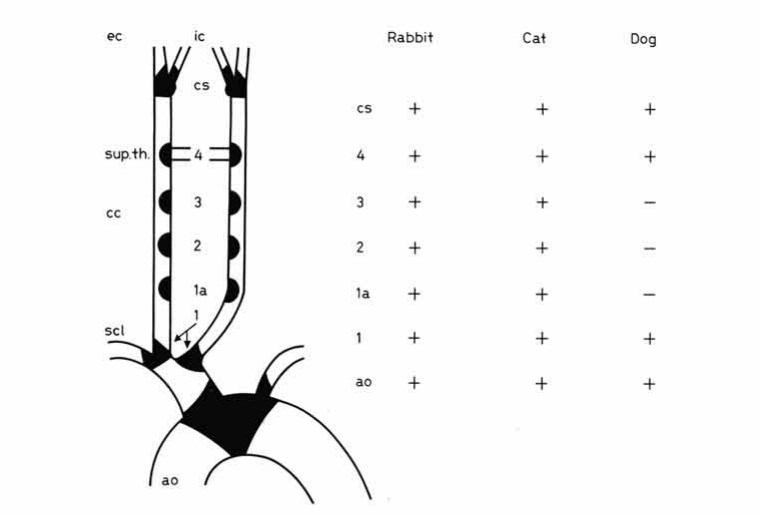 The observant reader will hasten to point out that this is clearly the aortic arch of some nonhuman mammal, and that this distribution may be completely different in people. To maintain their sanity, these readers should be reminded that interspecies and intraspecies variation of greater vessel plumbing is so varied that nobody should ever expect to confidently know the One and Only Baroreceptor Arrangement. There probably isn't one, and from a sensor efficacy perspective, who cares where the trick of chance has thrown them - as long as they are measuring the distension of a large proximal artery.

From the mechanoreceptors, both myelinated (A) and unmyelinated (C) afferent fibres travel up to the central nervous system. The large myelinated A-fibres carry fast signals which mediate second-by-second adjustments, and the slower C fibres presumably maintain some sort of slower baseline level of regulation (Porzionato, 2019).  There are two main afferent nerves here: the carotid sinus nerve and the aortic branch of the vagus nerve.

The carotid sinus nerve, as the name suggests, innervates the carotid sinus barosensors. It courses anteromedially to the internal carotid artery and joins the body of the glossopharyngeal nerve at the base of the skull, where its cell bodies lie in the petrosal ganglion.

The nodose and petrosal ganglia lie in the jugular foramen, and represent the last stop before the nerve fibres enter the brainstem. There, the afferent nerves synapse with neurons in the nucleus of the solitary tract. Both types of afferents mainly use glutamate as the neurotransmitter, i.e. the activation of baroreceptor afferents is an excitatory stimulus for this nucleus.

The nucleus of the solitary tract (NTS)  is a tiny group of mostly sensory interneurons in the posterior medulla, which is involved in regulating the autonomic nervous system. Its other roles include receiving information from the middle ear (via the tympanic branch of the glossopharyngeal nerve), receiving taste information via the chorda tympani branch of the facial nerve, and mediating the cough and gag reflexes. For this barocentric discussion, we will focus on its role in the negative feedback loops which control blood pressure and heart rate. The nucleus of the solitary tract puts the "negative"  into "negative feedback" by receiving the excitatory stimulus from the afferents, and translating this into an inhibitory (GABA-mediated) stimulus. In response to the glutamate-mediated excitation of the NTS by baroreflex activation, GABA-secreting neurons from the caudal ventrolateral medulla spray nice calming GABA all over the sympathetic regulatory centres in the rostral ventrolateral medulla.

The rostral ventrolateral medulla (RLVM) is the "vasomotor" centre, discussed in great detail by Brown & Guyenet (1985). It is a regulatory lever, pulled in one direction by excitatory glutamate-mediated neurotransmission, and in the other by GABA-mediated inhibitory signals. Under resting conditions, this nucleus has a constant tonic output, which is modulated by the abovementioned signals. Thus, the excitation of barosensors ultimately leads to an increase in GABA input, which has a depressant effect on the firing rate of RLVM neurons.

The rostral ventrolateral medulla communicates with (cholinergic) preganglionic neurons in the spinal cord. These, in turn, communicate with noradrenergic neurons in the sympathetic ganglia  The output of the rostral ventrolateral medulla is distributed widely into the sympathetic nervous system, and has numerous effects, of which the most important is the α-1 mediated tonic control of peripheral vascular resistance. For example, when blood pressure drops and baroreceptor firing rate decreases, the sympathetic efferent part of this reflex produces arteriolar vasoconstriction, particularly in skeletal muscle. Additionally, sympathetic fibres through the stellate and middle cervical ganglia innervate the conduction system of the heart, providing β-1 mediated control of heart rate.

Efferent fibres via the vagus nerve regulate the heart rate.

The nucleus of the solitary tract depresses heart rate by activating vagal efferents, which communicate with the cardiac ganglion. Increased cholinergic transmission along this efferent pathway inhibits the automaticity of the sinoatrial node, and influences the rate of transmission through the AV node. The right vagus does the SA node and the left vagus does the AV node, with enough overlap that the loss of a vagus does not produce total parasympathetic denervation. That means that the right vagus is more important, as the SA node dictates the heart rate, and the AV nodal conduction delay is a minor player (Parker et al, 1984). Generally, vagal input into the nodes is described as being more important than sympathetic input.

In summary, and walking through this process in baby steps, this is what happens when the baroreflex is triggered by an abrupt drop in blood pressure:

Because of the presence of fast myelinated fibres in the afferent and efferent arms of the reflex, control of vascular tone and cardiac output can be very rapid. Borst & Karemaker (1983) were able to time the vasonconstrictor response very precisely in patients whose carotid sinus nerve was already instrumented with a stimulator. As you can see, the response was almost immediate: 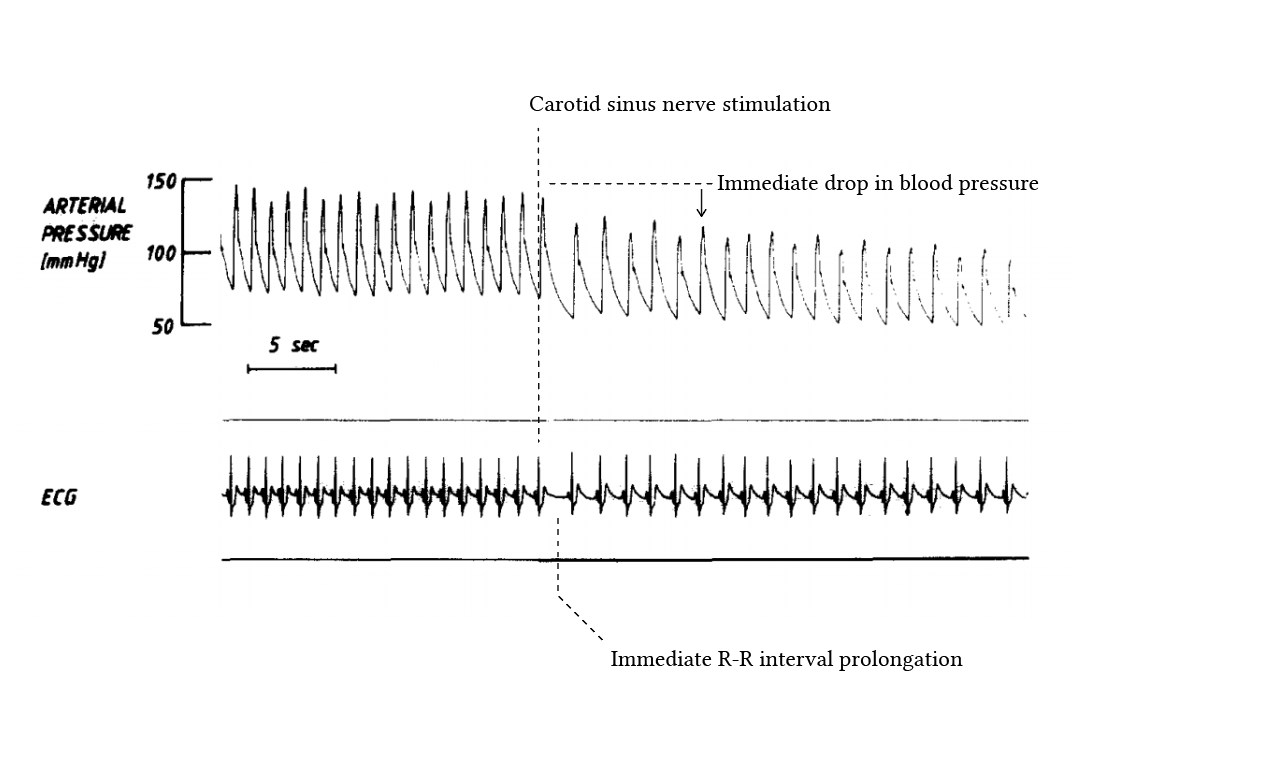 To be precise, the investigators recorded a latency of about 0.5-0.6 seconds for a change in sinoatrial node rate (the P-P interval), about 1.0 second latency for a prolongation of the PR interval (reflective of increased AV nodal conduction delay), and about 2-3 second latency for the vasodilator response. The rapid vagal effect is said to be related to the direct activity of acetylcholine on special inward-rectifying potassium channels; whereas other effects (eg. noradrenergic vasoconstriction) rely on the comparatively slower cAMP second messenger system.

How sensitive is this reflex? Turns out, parts of it are very sensitive indeed. Donald & Edis (1971) isolated carotid sinuses and aortic arches of dogs to see what the application of pressure to these structures will do to the systemic blood pressure. As the pressure to the barosensors was increased, so systemic blood pressure decreased, and the authors were able to plot these on a graph of pressure vs. pressure:

Aumonier, F. J. "Histological observations on the distribution of baroreceptors in the carotid and aortic regions of the rabbit, cat and dog." Cells Tissues Organs 82.1 (1972): 1-16.