This chapter answers Section G6(i) of the 2017 CICM Primary Syllabus, which expects the exam candidate to "explain the response of the circulation to changes in ...anaemia". The fact that this "ability" resides in the cardiovascular section, and the haematology section contains the almost identical Section Q (vi), "explain the physiological consequences of acute and chronic anaemia", suggests that separate committee members were instructed to create each section, and that they did not talk to each other, nor did the final document undergo any sort of editorial process.

specifically look at the circulatory effects of anaemia, and anaemia in general is probably common enough in the ICU that responsible practitioners of the critical arts should want to know something about it.

Unfortunately, there is no single overview which could answer this syllabus item on its own. Or rather, it probably exists, but is unreachable by modern man. "The physiology of acute isovolaemic anaemia" by Van Der Linden (2002) sounds like the perfect article to base your study on, except it is not available even in the form of an abstract, and nobody in this authors' orbit has online access to the transactions of the Belgian Surgical Society who published it. Instead, the content of this chapter had to be pieced together from several other sources, and they are listed throughout the text.

The dangers of anaemia

Most would agree that oxygen carriage by the circulatory system is an important (some might say, essential) component of multicellular life, while it expects to continue living outside of a hyperbaric oxygen chamber. Dissolved oxygen will not contribute enough to your total oxygen supply, as it maxes out at about 22.8 ml per litre of blood at normal atmospheric pressure (100% FiO2, at 0.03 ml/mmHg/L,  multiplied by 760). Ergo, haemoglobin is essential.

How much haemoglobin is required? Or, to rephrase the question, how little can you live with? Surprisingly little, provided your definition of "live" incorporates almost dying. An excellent case report by Essex et al (1997) presents a scenario which likely represents the limits of anaemic survival. It describes the fate of a young man with paroxysmal nocturnal haemoglobinuria, who was found peri-arrest on his floor at home with a haemoglobin of 12g/L and a haematocrit of 3%. He survived in spite of presenting to hospital with a lactate of 28.

Clearly, robust compensatory response can make up for a truly preposterous lack of oxygen-carrying capacity. The rest of this chapter will focus on the cardiovascular mechanisms involved in this response, rather than all the other interesting physiological effects of acute and chronic anaemia, which are exiled to the haematology section.

There are, of course, many scenarios where anaemia exists in the absence of volume loss. Perhaps your bloodstream grated those red cells like cheese. Or they got smooshed by a metallic valve. Or perhaps you never created any in the first place, owing to iron deficiency. But the most common cause is bleeding. Haemorrhage, from the cardiovascular perspective, is basically the loss of isotonic volume which also happens to have some red cells in it.

The red cell concentration of the volume remaining in the vessels is initially the same as that of the volume on the floor. In other words, if you abruptly have a massive 2500ml haemorrhage, the haemoglobin concentration of the remaining volume will still be exactly the same as it was before the haemorrhage. Anaemia develops gradually after bleeding, as the result of transcapillary fluid migration. This is the movement of extravascular fluid into the circulation which refills the circulating volume and dilutes the remaining red cells, producing the haemoglobin drop which we have all come to associate with blood loss. A more detailed discussion follows in the chapter on physiological consequences of haemorrhage, but for now it is enough to say that anaemia associated with blood loss takes some time to develop. By about 30 minutes, the transcapillary refill will have replenished the circulating volume, and a state of isovolaemic (isovolemic? isovolumic?1) anaemia prevails.

Weiskopf et al (1998) performed actual human experiments to see what this would look like. They floated PA catheters into a series of fit healthy victims and exsanguinated them from one arm while transfusing 5% albumin into the other. The pressures were maintained throughout, as you can see from their graphs reproduced below. Even though it defies convention to do so, the author has reproduced their data in reverse here, because it made more logical sense for him to see the haemoglobin going down from left to right. 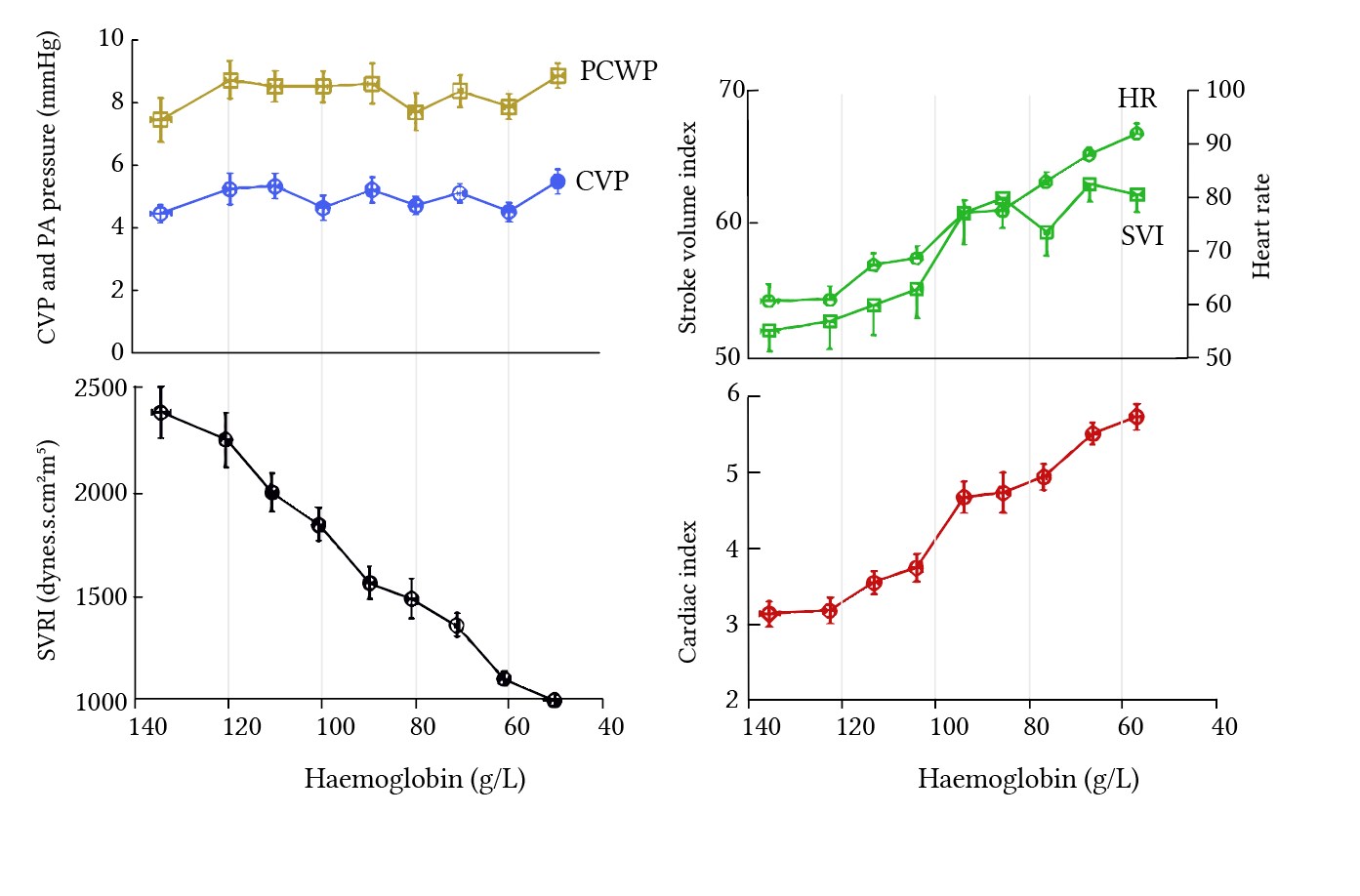 The capillary wedge pressure and CVP were super-stable in this data set because that's how the authors decided to establish that their subjects were remaining isovolaemic; in other words, they used these data to titrate the rate of albumin transfusion during the experiment.

In summary, dropping the haemoglobin from 140 to 50 did little to degrade the oxygen delivery to the tissues. None of the subjects developed a raised lactate. The oxygen extraction ratio changed only slightly, as the SvO2 dropped from around 76% to around 69%. In short, owing to robust cardiovascular response mechanisms, this fairly extreme anaemia was very well tolerated by the test subjects. The rest of this chapter will discuss the

Mechanism of the cardiovascular response to anaemia

Surely, one might conclude that the isovolaemic-ness of this state basically excludes normal mechanosensor mechanisms from participating. As far as the baroreceptors are concerned, everything is just fine. The pressures are the same. However, clearly the heart rate and stroke volume increase. So, what is it about anaemia that causes these cardiovascular events? Is it the loss of haemoglobin itself that triggers this response?

An elegant experiment by Rosen et al (1979) sheds some light on this matter. The investigators experimented on a group of baboons, exposing them to haemodilution by exchanging their original blood volume with one which had been diluted down to a Hb of 60g/L, using Dextran. Then, to determine the influence of oxygen carriage, they manipulated the p50 of the replacement blood by adding various measured amounts of pyridoxalated haemoglobin. For those unfamiliar with cancelled transfusion fads from the 80s and 90s, pyridoxalated haemoglobin is a weird undead version of haemoglobin produced by embalming expired packed cells in pyridoxal 5-phosphate (it binds to the N-terminal valine of haemoglobin, changing its affinity for oxygen). This Frankenglobin has a p50 value much lower than standard haemoglobin, and the investigators were able to vary the p50 value of their exchange transfusion all the way down to 10 mmHg. This allowed them to determine that haemoglobin concentration, in and of itself, does not have any influence on the cardiovascular response to anaemia. It is the delivery of oxygen that matters most.

Specifically, the delivery of oxygen to the aortic body chemoreceptors is the most important afferent element in the cardiovascular response to anaemia. Unlike the carotid bodies, the aortic sensors respond to oxygen content rather than oxygen tension. Lahiri et al (1981) demonstrated this in an elegant experiment where the aortic arch of a cat was poisoned with carbon monoxide. The blood perfusing it had a carboxyhaemoglobin concentration of 70%, but a completely normal oxygen tension (something like 75 mmHg). As you can see from the original data, the aortic chemoreceptors increased their firing rate thirty-fold. On the other hand, the carotid chemoreceptors were completely oblivious to the carbon monoxide toxicity. 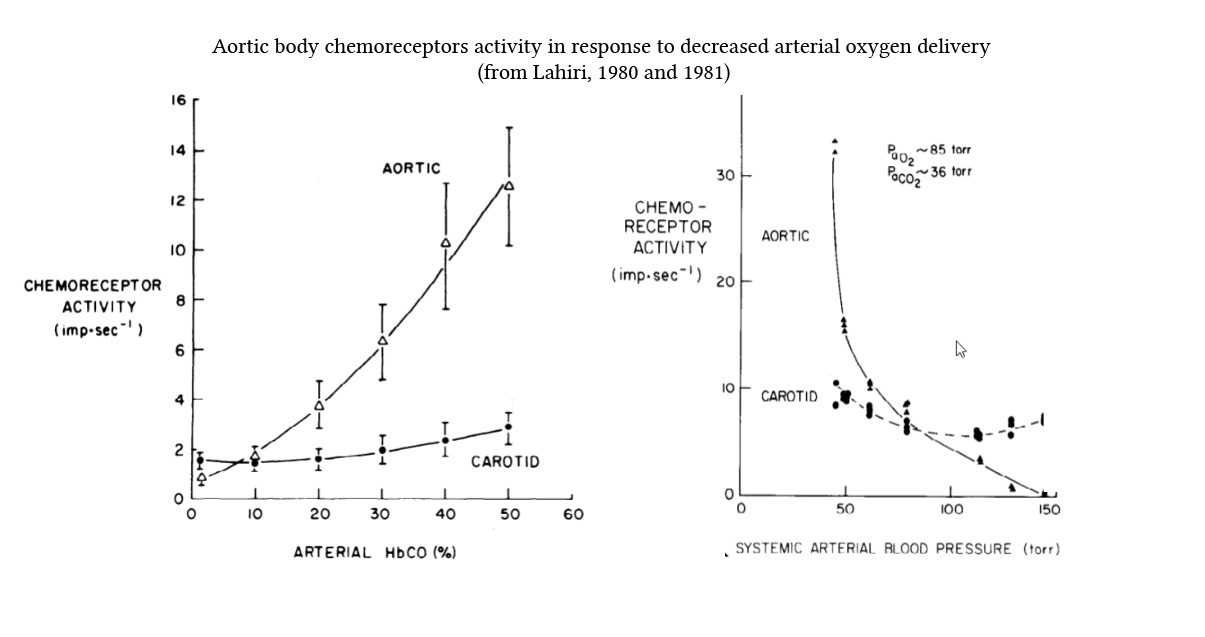 These chemoreceptors connect to the nucleus of the solitary tract, from where the rest of this cardiac reflex takes a relatively predictable course. The vagus nerve is both the efferent and the afferent limb here; specifically it appears that decreased output of vagal efferents is the main reason for the increase in heart rate and stroke volume (Fahim & Singh, 1992).

As you can see, the most startling observation from Weiskopf et al (1998) is the substantial drop in systemic vascular resistance. To go from an SVRI of 2500 to an SVRI of 1000 is not a trivial change - it resembles post-bypass vasoplegia or septic shock. This is completely the opposite to what you might expect to happen with baroreceptor activation. What accounts for this impressive vascular laxity?

Well; it appears that this systemic vasodilation due to anaemia is mediated by regional nitric oxide. This mediator is one of the agents responsible for the metabolic regulation of peripheral vascular resistance (R.J Korthius, 2011). In short, in systemic anaemia, this regional control mechanism becomes systemically important. This was demonstrated very effectively by Doss et al (1995). They took a bunch of rats, inhibited their NO synthesis, and then observed that isovolaemic anaemia did not produce any change whatsoever to their peripheral vascular resistance. Conversely, when they disabled the rats' sympathetic nervous systems with a high spinal lesion, anaemia-induced vasodilation was still observed, which clearly demonstrates that it is not an autonomic phenomenon.

Yes, severe anaemia (and therefore also severe polycythaemia) are scenarios where blood viscosity actually plays a significant role in the overall vascular resistance; whereas in pretty much every other circumstance it is an unfairly neglected part of the Poiseuille equation:

At this stage, the attentive reader will point out that the normal product of vasodilation is hypotension, and that even though aortic chemoreceptors mediate most of the cardiac output increase in acute anaemia, ultimately the baroreceptor reflexes must surely get involved anyway. This is probably correct. Anand et al (1993), observing chronically anaemic patients, noted that the neurohormonal mechanisms involved in regulating blood pressure were all substantially activated. Serum catecholamine levels were doubled, renin activity was increased 15-fold, and aldosterone levels wre three times higher than normal. As a result, these patients all had greater body water volume, higher CVP and PCWP, and higher total body sodium - basically all the things which you would expect from somebody whose circulatory system thinks it needs to defend volume. The cause of this, the authors reasoned, must surely be the activation of normal barosensory mechanisms in response to vasodilation.

Daly, M. de Burgh, Julie L. Hazzledine, and A. Howe. "Reflex respiratory and peripheral vascular responses to stimulation of the isolated perfused aortic arch chemoreceptors of the dog." The Journal of physiology 177.2 (1965): 300-322.

Biro, G. P., J. D. Hatcher, and D. B. Jennings. "The role of the aortic body chemoreceptors in the cardiac and respiratory responses to acute hypoxia in the anesthetized dog." Canadian journal of physiology and pharmacology 51.4 (1973): 249-259.

Whittaker, S. R. F., and F. R. Winton. "The apparent viscosity of blood flowing in the isolated hindlimb of the dog, and its variation with corpuscular concentration." The Journal of physiology 78.4 (1933): 339.