This chapter answers Section G6(i) of the 2017 CICM Primary Syllabus, which expects the exam candidate to "explain the response of the circulation to changes in ...exercise". Until Question 11 from the second paper of 2020, no written exam questions have ever been asked about this in the CICM First Part exam. Moreover, much of the material regarding oxygen uptake and cardiac output changes has already been described in the chapter on regional skeletal muscle blood flow.

Exercise and sports science are sexy topics, and therefore there is no shortage of literature out there to describe and summarise these matters in some detail. Laughlin (1999) is a particularly good example of this, containing all the material which is essential for the discussion. It covers all the same ground as covered in the official CICM text (Pappano & Weir, Ch.13),  and it's free.

Recall that skeletal muscle can increase its blood flow from 1-4ml/min/100g of muscle tissue at rest all the way up to 400ml/min/100g with vigorous exercise. This flow increase is mediated by a regional decrease in vascular resistance, which for muscle tissue is very high at baseline. The mechanisms which mediate this vasodilator response are numerous:

But the bottom line is, increased muscle activity requires increased muscle metabolism, and for us aerobic organisms this means the exercising muscle needs a large supply of oxygen. Unsurprisingly, this relationship is linear. Here, a famous old diagram is reproduced - it comes from an old physiology textbook by Rowell (1993). 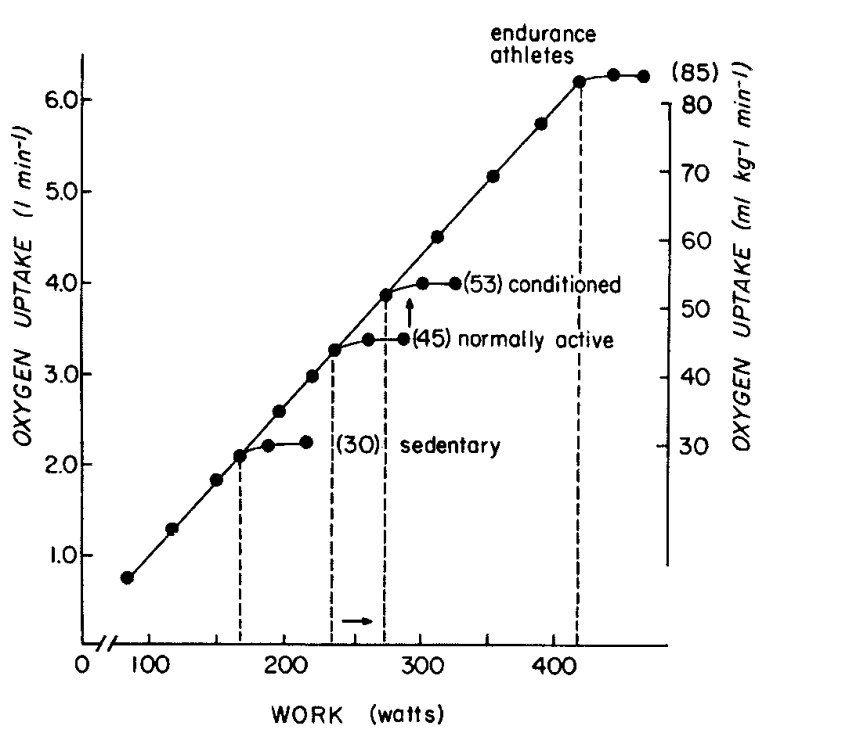 As you can see, the muscles of the sedentary sloth and the muscles of the performance athlete require the same amount of oxygen per unit work. The main difference between these individuals is the amount of oxygen delivery their cardiovascular systems can sustain. To supply such active muscle, athletic individuals can expect their cardiac output to increase up to 30L/min or so, of which the vast majority (90%) ends up being distributed to their exercising muscles (Mortensen & Saltin, 2014). The myocardium in this context also becomes an avid consumer of oxygen, as it takes considerable effort to move 30L of blood every minute.

Other organ systems which are not essential to exercise end up being sacrificed for the greater good; their blood flow diminished significantly as the autonomic nervous system redirects all power to the engines. The same basic diagram of blood flow distribution graphed against increasing VO2 is reproduced in multiple sources, and a Laughlin version is reproduced below. In case anybody is wondering, it comes from a 1987 study by Armstrong et al; the subjects were 20kg miniature piglets. 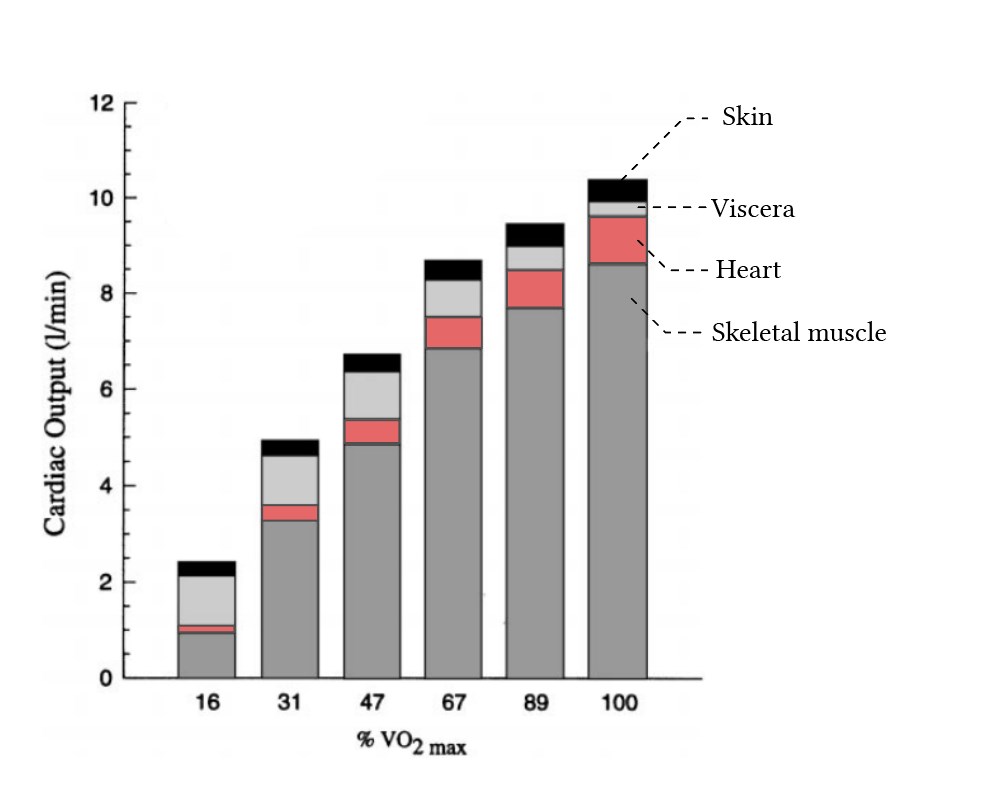 Apart from the noticeable increase in myocardial blood flow, one can see that skin blood flow is also increased. This is not what you would normally expect from a sympathetically mediated redistribution of blood flow, i.e. usually skin is viewed as a non-essential tissue. However, in the context of exercise, blood flow to the skin increases in order to improve the removal of metabolic heat. Only when the limits of endurance are reached does skin blood flow begin to diminish again, probably as a desperate measure to reserve every last drop of blood for the muscle fibres.

As muscle demand increases linearly, cardiac output must also scale up in proportion. As already mentioned above, in fit healthy individuals, the maximum attainable value can be truly massive. For instance, Ekblom & Hermansen (1968) recorded a cardiac output of 42.3L/min in one Swedish athlete - and that was before performance-enhancing drugs became mandatory in professional sports. In short, it can get quite high. This apogee is achieved by a combination of increased heart rate and stroke volume, which is logical (as those are the determinants of cardiac output). Typically, at this stage a graph such as this one is offered to the reader in support of this assertion, and to describe what happens at the limits of endurance. This version of it is from Munch et al (2013). The original (clear, professional) diagrams were dismembered and recombined into this single chart, which in retrospect was probably a pointless exercise as nothing of value was added. 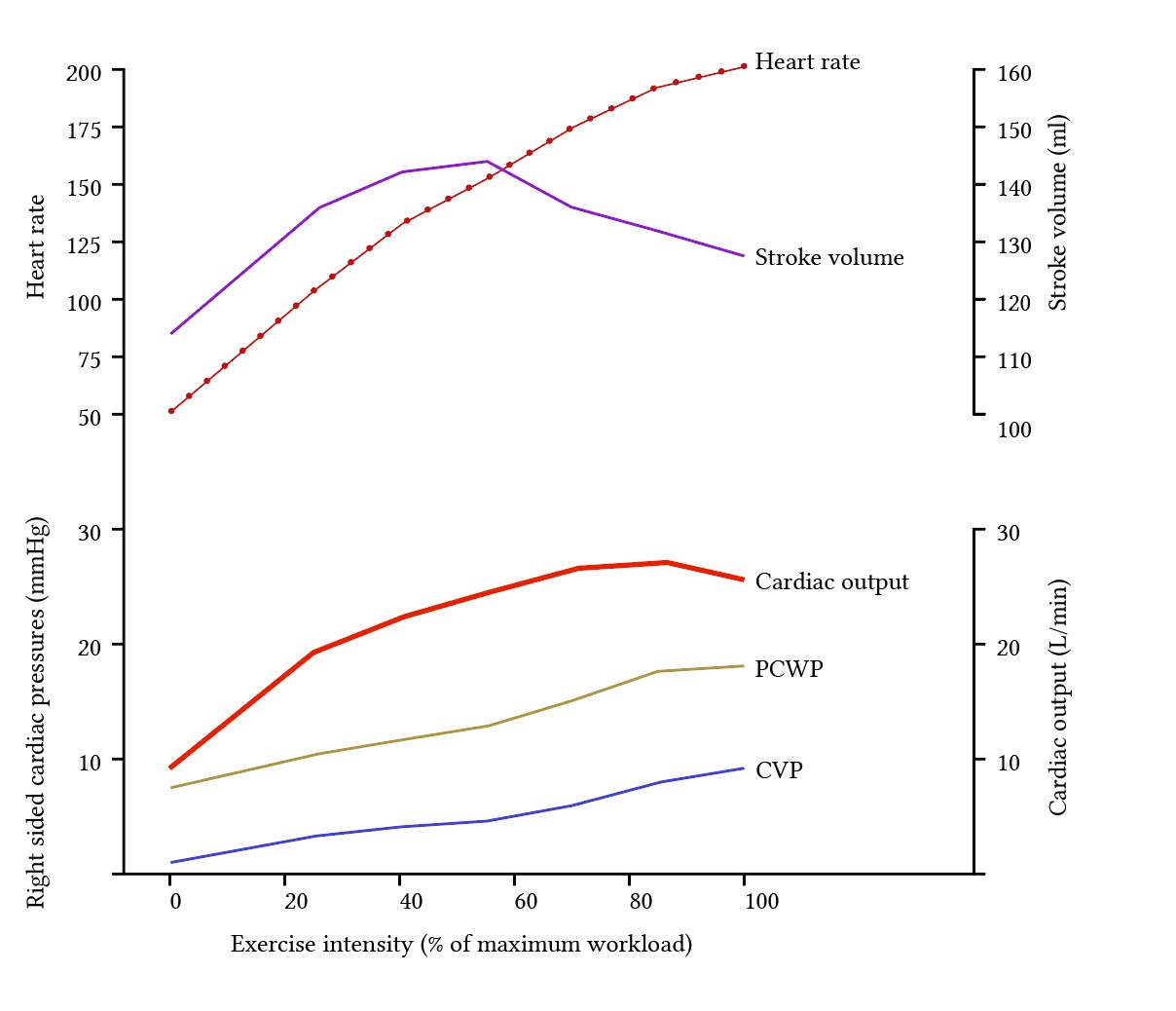 Additionally, one can see that the central venous pressures also increased. Cardiac output and venous return being equally matched, this makes sense- more blood is returning to the heart. Additionally, there is vasoconstriction which increases the venous resistance and decreases the venous compliance, changing the shape of the vascular function curve. In short, if you needed to go full Guyton on this, you could do so by means of the following graphical representation: 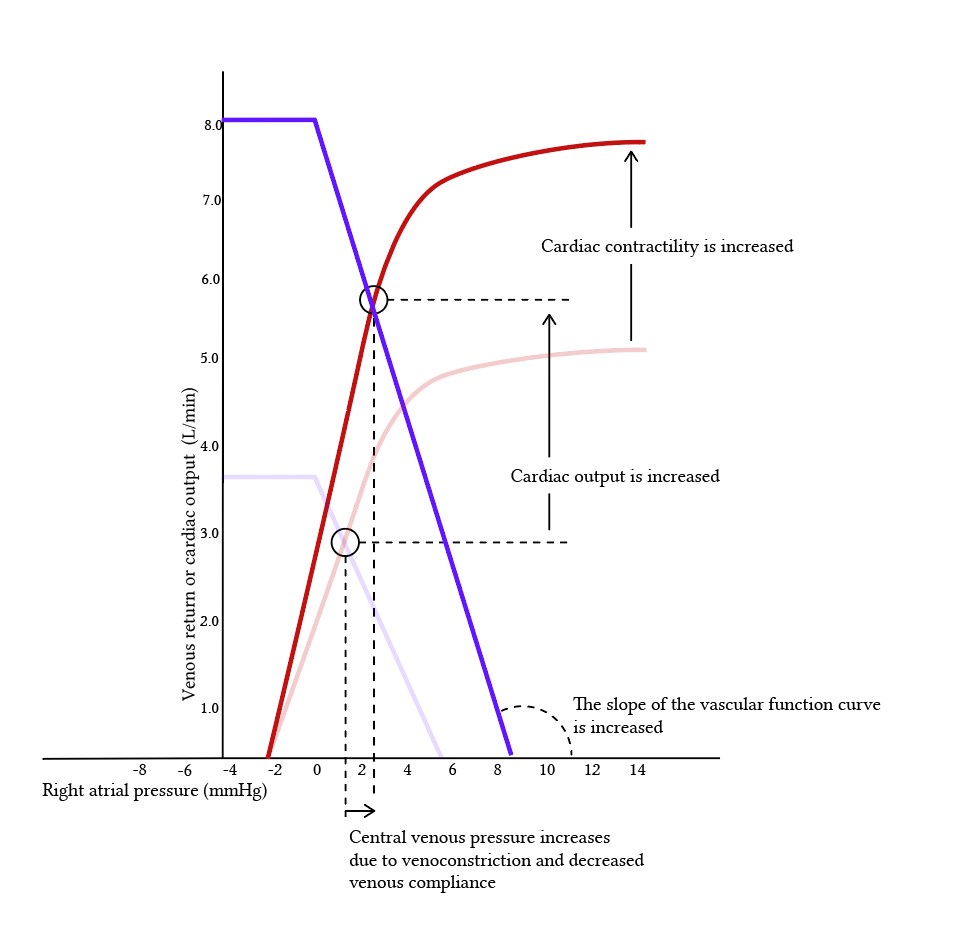 The net effect of exercise on blood pressure

The diagram below was stolen from McDougall (1993), via Laughlin (1999). It is reproduced here without any modification whatsoever, in honour of the gorgeous image of a test subject calmly operating a cycle ergometer in the corner. 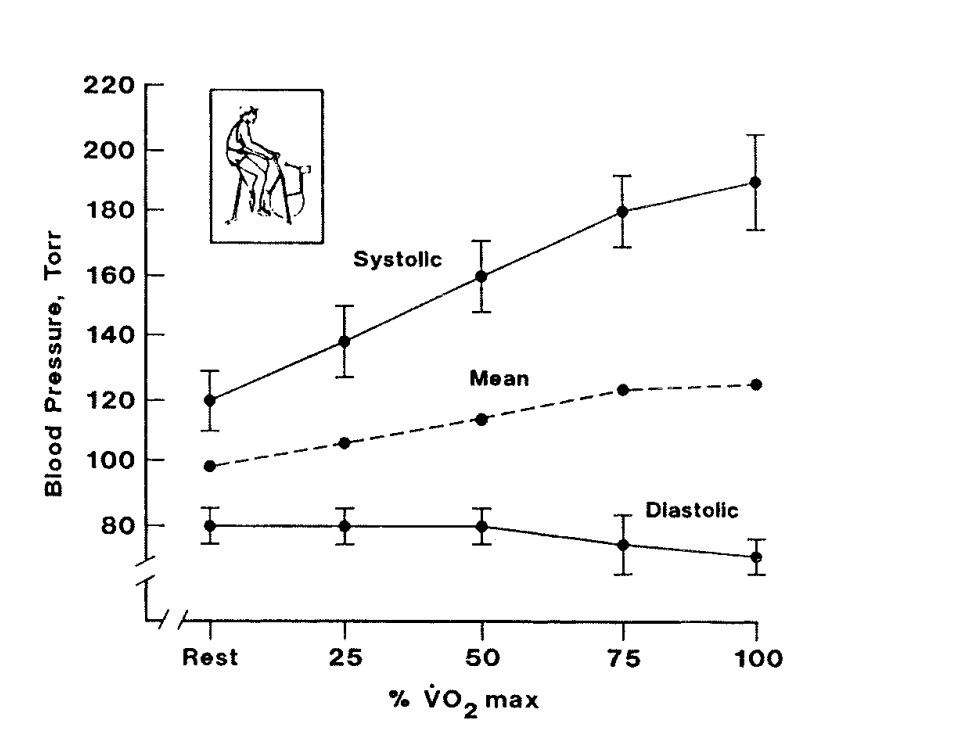 These changes, in summary:

Central regulation of the cardiovascular response to exercise

In the evolutionary playground of the early hominids (red in tooth and claw, etc) our ancestors would not have been grateful for a fight-or-flight response which only reacts some seconds after you've started running for your life. The muscle vascular beds would vasodilate in response to exercise, which would produce a drop in blood pressure, and of course eventually (over a few heartbeats) the baroreceptor reflex would pick up the slack and restore homeostasis, but by that point the syncopal Austalopithecus would have already faceplanted comically. Clearly, this would be an ineffective way of managing your circulatory system. There would need to be a mechanism which is controlled by higher centres and which would be able to anticipate the need for vastly increased cardiovascular resources.

Fortunately, these mechanisms exist, and  Nobrega et al (2014) have described them beautifully. There is probably no merit in discussing them in any great neurological depth, nor the hideous history of their early investigations (piles of dead cats with brains bisected along different transverse planes). It will suffice to broadly generalise that the mechanism which increases cardiac output in anticipation of exercise is also the same mechanism which helps motor function planning. The origin of these signals appears to be the motor cortex itself.