Physiology of the Valsalva manoeuvre

This chapter answers Section G6(ii) of the 2017 CICM Primary Syllabus, which expects the exam candidate to "Explain the physiological consequences of ...the Valsalva manoeuvre". It had only appeared once in the CICM First Part written exam, in Question 3 from the first paper of 2013. The poor representation of this item in the past papers should not discourage even the most cynical trainee from reading about it, as it has a rich and storied history of appearing in vivas. Or rather, in the ANZCA exam vivas; and CICM has a rich and storied history of lifting whole swaths of material from ANZCA syllabus documents and exam content. Ergo, our trainees should be prepared for this question as their inevitable future. Not to worry; it's quite straightforward.

The Valsalva manoeuvre is, fortunately, a favourite topic of reviewers, and there is no shortage of material to act as references; so much so that the trainee short on time is at risk of wasting it by having to filter through this abundance of material. One is advised to pick a resource and stick to it, as they all contain exactly the same information The best and most detailed one is probably Pstras et al (2015), but it is paywalled by Wiley. They already have enough money, so instead of buying Pstras, the next best (and free) article has to be Junqueira (2008), as it also contains all the graphs you might be called upon to reproduce, moreover being written in an easy engaging style. The asynchronous learner is redirected there for an example of what good technical writing is supposed to look like. Locally, cackhanded explanations of the cardiovascular responses to positive pressure ventilation may fill in some of the blanks which might not be totally clear from reading this chapter (eg. what happens to the LV transmural pressure). Apart from that unreliable non-peer-reviewed resource, the cream of the FOAM universe includes superb summaries by CVphysiology.com, LITFL, Part One and CICMwrecks.

Antonio Valsalva originally developed this manoeuvre in the 18th century, for the purposes of expelling purulent material from an infected middle ear. His work was preceded by 17th and 16th century works by mainly surgical specialists (Leonard of Bertapaglia and Ambroise Paré), who described the technique first, and it was followed by Edward Weber who described its cardiovascular effects; and so it is unclear how it could still be called the Valsalva manoeuvre. For the purposes of rapidly explaining it to somebody, the manoeuvre can be defined as:

"Forced expiration against a closed glottis"

However, that would probably not satisfy the examiners, as not all of our patients have control over their glottis. Pstras et al (2015) prefer to describe it as

"A forced expiratory effort against a closed airway"

That's more ICUish, but still does not describe exactly how forced, how much effort, and for how long. To add that level of complexity,  others have been even more prescriptive, demanding that a certain airway pressure be maintained, and for a certain duration. According to Kumar et al (2018) and Junqueira (2008):

This is also the description of the Valsalva manoeuvre used by the 2015 ACC/AHA/HRS guideline for the management of SVT, which they recommended on the basis of a couple of studies comparing the efficacy of different vagal manoeuvres. The argument for the ongoing use of this definition is therefore purely functional: the Valsalva should look like this because that's the kind of Valsalva that gets results.  To take things even further, Looga (2005) outlined a whole range of variation, including an inspiratory Valsalva manoeuvre and an "intermediate" one in which a smaller intrathoracic volume is used.

The four phases of the Valsalva manoeuvre

"Graphs required were those of the changes in intrathoracic pressure, the pulse pressure response and the heart rate response", the college remarked in their comments on Question 3 from the first paper of 2013. This is a good guide as to how one might discuss this topic, as one's encounters with the Manoeuvre are typically framed by the borders of a monitoring screen. A good arterial pressure trace was stolen from Wenner et al (2006) to facilitate the imagemaking process, and to add some much-needed authenticity to what is otherwise a fairly sterile hypothetical diagram.  Additionally, in case this picture is not worth a thousand words, some of what follows includes letters which were arranged into incomplete sentences, potentially with a beneficial educational effect.

Phase 1 of the Valsalva manoeuvre: Onset of strain 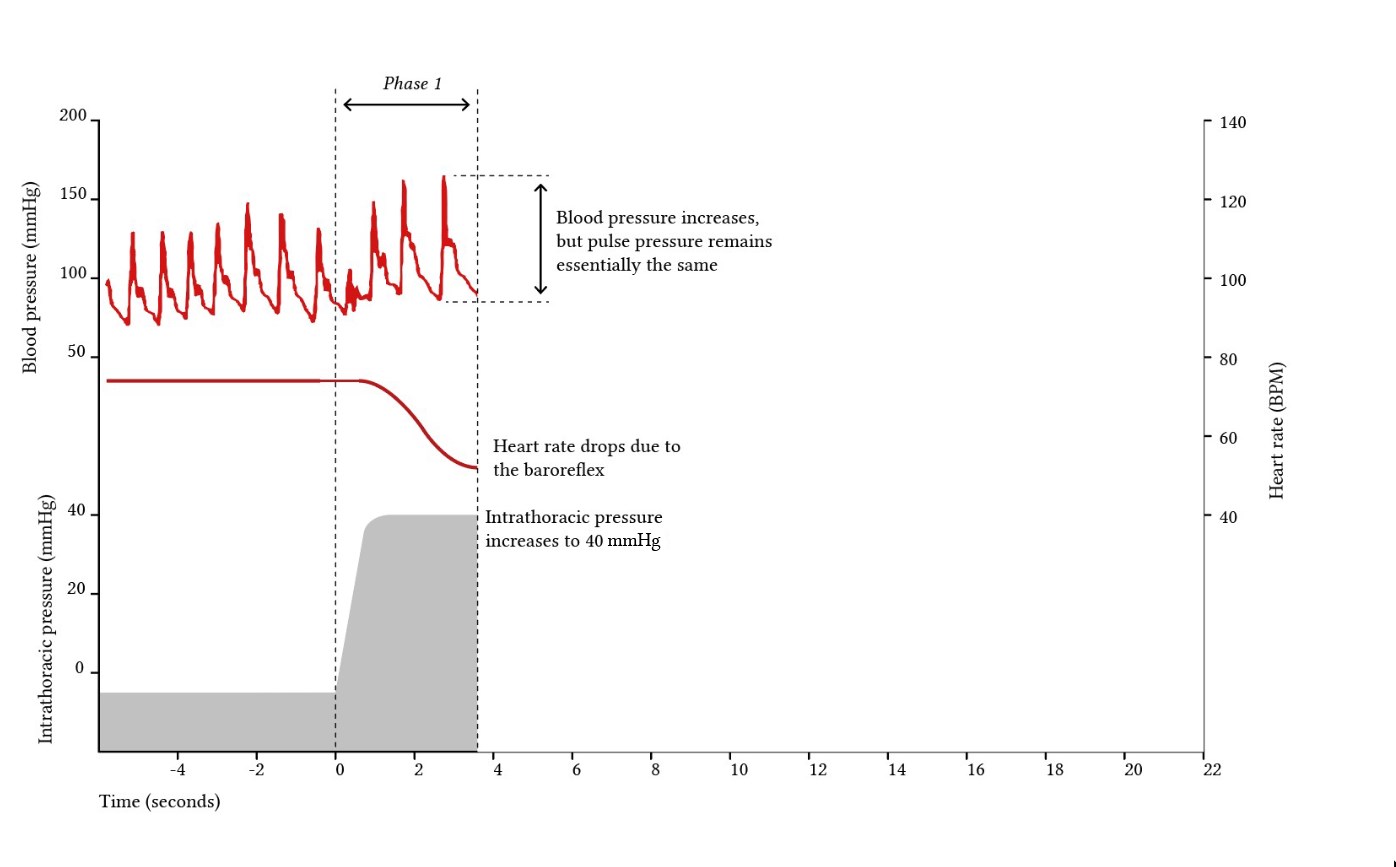 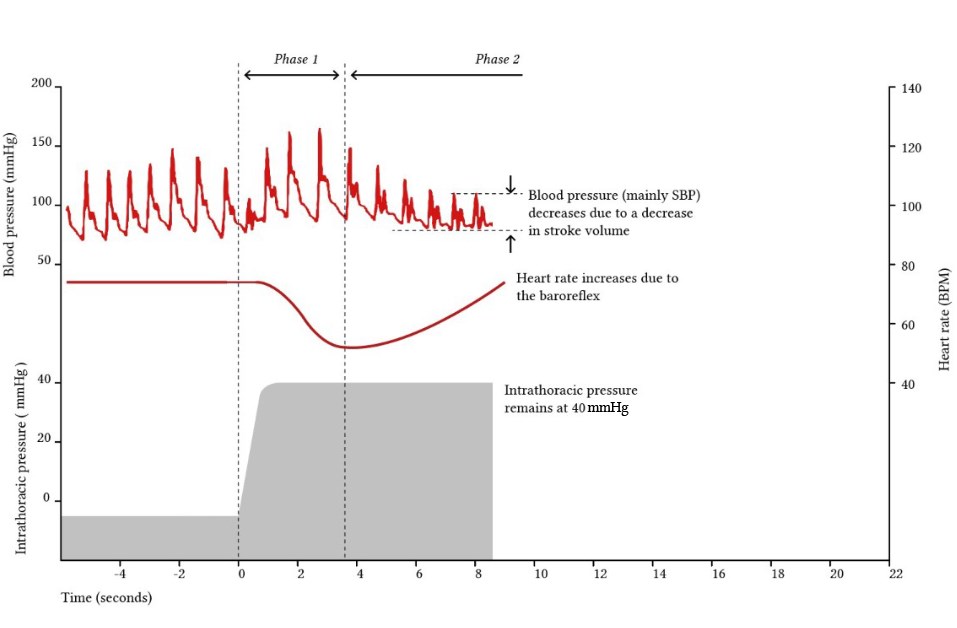 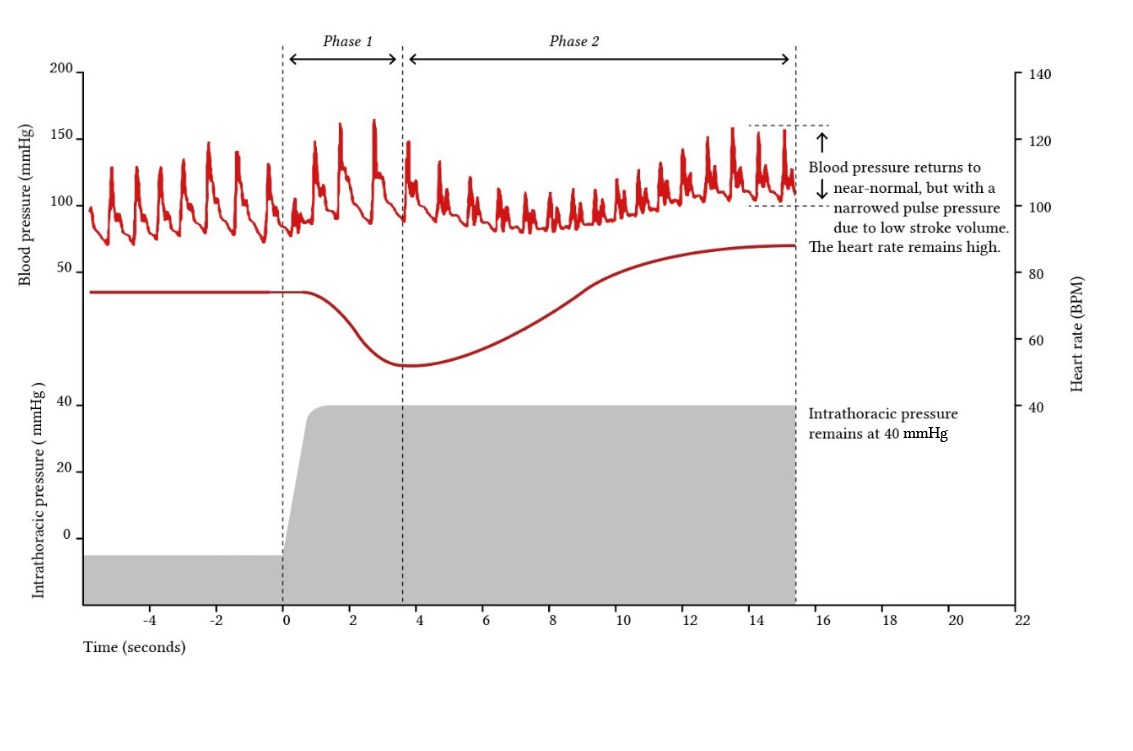 Phase 3 of the Valsalva manoeuvre: release 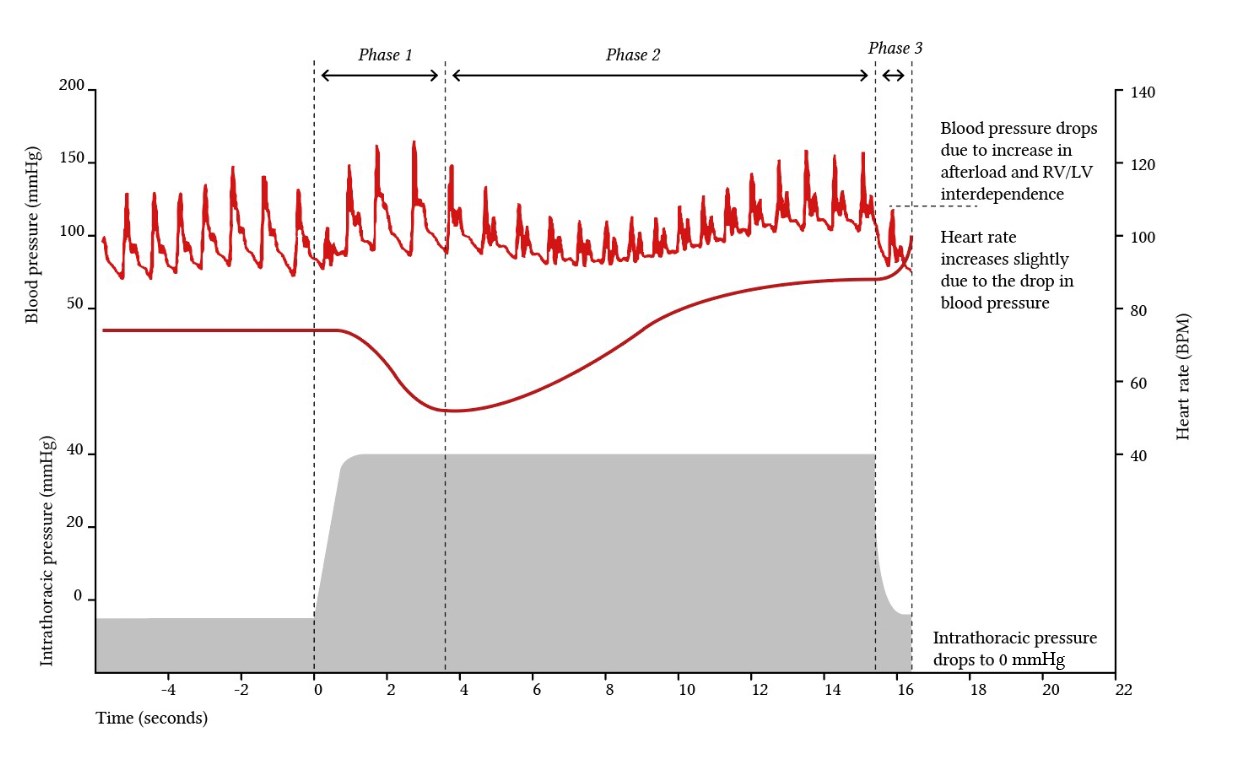 Phase 4 of the Valsalva manoeuvre: recovery 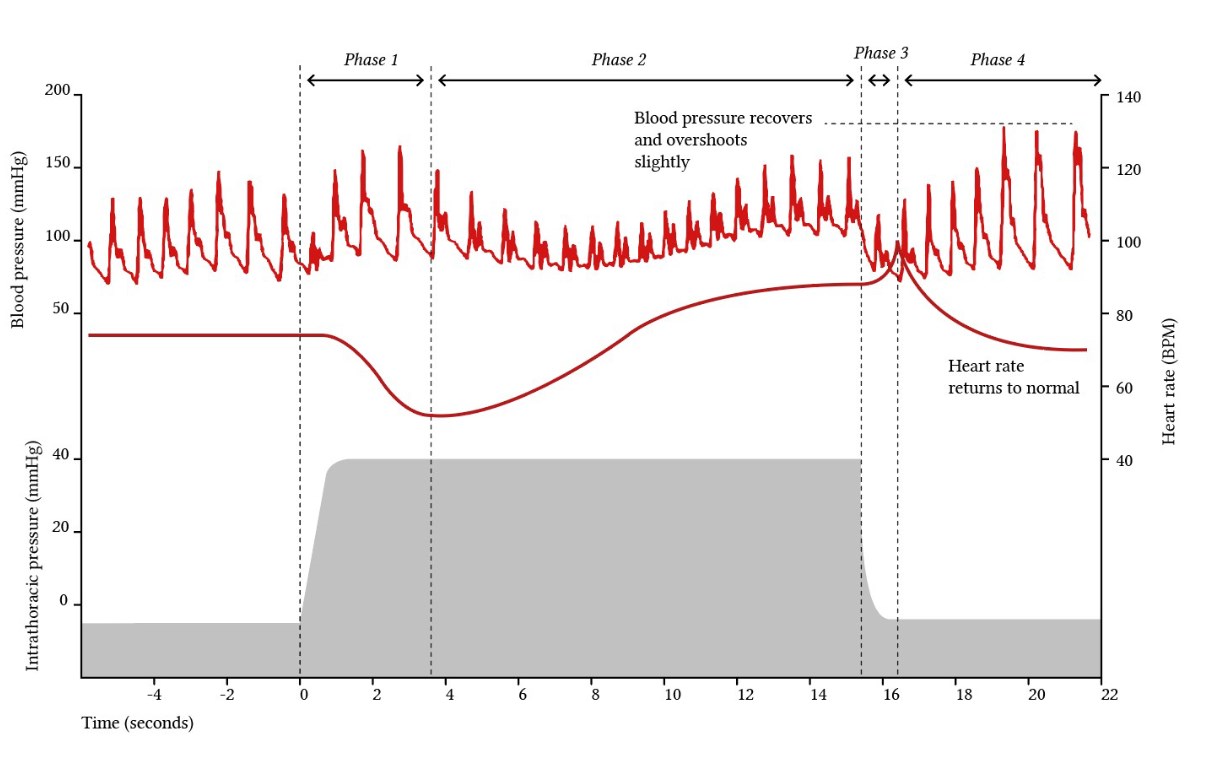 Now, it goes without saying that quoting the exact values for any of these changing haemodynamic variables is completely pointless. To inappropriately verb the eponym, one may say that every organism who Valsalvas, Valsalvas differently. As an example, Pstras et al (2015) report that it is possible to completely block your IVC in the course of this manoeuvre, and produce a brief sinus arrest. In short, though the graphs above are presented with reassuring number labels on the y-axis, those numbers can be viewed as purely decorative, and should not be used to generate a sense of perspective, or reproduced in the exam setting.