This chapter is vaguely relevant to Section G7(iii)  of the 2017 CICM Primary Syllabus, which asks the exam candidate to "describe the invasive and non-invasive measurement of blood pressure, including limitations and potential sources of error". It is also loosely associated with Section G7(ii),  "describe the principles of measurement, limitations, and potential sources of
error for pressure transducers, and their calibration".
It represents a summary of the important concepts for the purpose of rapid revision, with a focus on arterial blood pressure measurement.

The need for such a summary is not clear in the context of the CICM Part I exam, as the examiners have only ever interrogated the trainee's understanding of these matters once, in Question 2 from the first paper of 2019. "Hydraulic coupling and transducers" formed an important part of the answer there.  Overall, the subject matter seems like something foundational to ICU practice, and in his attempt to explain these issues to himself the author had written extensive notes on the subject early in his career. It seemed wasteful to destroy them, and they are reproduced here for sentimental reasons as much as for educational ones.

In summary, the components of the measurement system and their characteristics are as follows:

The fluid-filled transducer system used for this is the same as would be found in any other system measuring the pressure in any other fluid-filled compartment (central veins, cerebral ventricles). The physics behind this is discussed at great length in the chapter on "Pressure transducers for haemodynamic measurements" and "Resonance, damping and frequency response". These and other entries under the heading "Principles of Pressure Measurement" represent a redux of this chapter and add little to the learning process, in the same way that a four-hour director's cut adds little to the content of a motion picture which retains all of its positive qualities when cut by 50% for cinema release.

The arterial pressure wave travels at 6-10 metres/sec. The cannula in the artery is connected to the transducer via some non-compliant fluid-filled tubing. The transducer is usually a soft silicone diaphragm attached to a Wheatstone Bridge. It converts the pressure change into a change in electrical resistance of the circuit. This can be viewed as waveform.

The idea is that the fluid in the tubing transmits the pressure wave to the transducer - The whole principle rests on a continuous cylinder of saline connecting the artery to the pressure transducer. The design and engineering characteristics of this tubing has a significant influence on the function of the whole transducer system.

Without restating the material discussed in the chapter on resonance and damping, one can simply say that "damping is anything that has a "shock absorber" effect on the art line. Air bubbles, long tubing, narrow tubing or soft compliant tubing – all of these absorb some of the force of the pulse wave decreasing the amplitude of the oscillations. This is one of the reasons normal IV tubing is not used to set up an arterial line transducer kit: the IV tubing is too soft and compliant. An excessively elastic length of tubing will cause damping by absorbing the energy of the pressure wave, wasting it on deforming the walls of the transducer set (which will depend on the viscosity of the tubing material). The professional-sounding way to express this concept in the exam would be to say that elastic tubing increases the damping coefficient.  To modify a diagram from Gardner (1981), which describes the relationship between damping coefficient and resonant frequency on art line waveform interpretation: 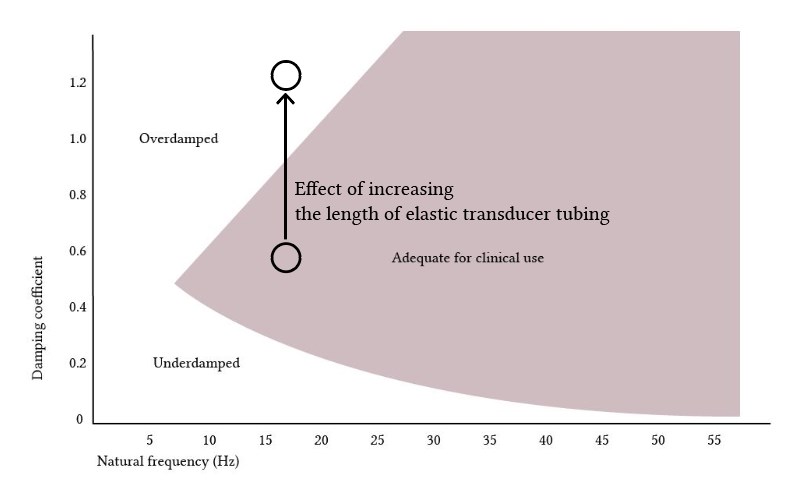 So: taking an otherwise adequate arterial line trace and increasing the damping by increasing the elasticity of the tubing will take it into an unuseable overdamped territory.  Overdamping results in a slurred waveform with overestimation of the diastolic and underestimation of systolic; however, the MAP value is usually preserved. In contrast, a kinked or clogged art line will see MAP systolic and diastolic all trending towards zero. 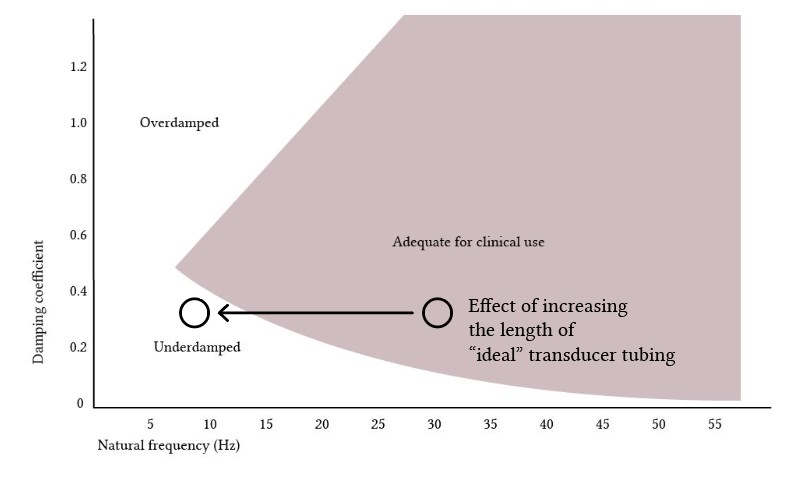 So, as you can see, increasing the length of this ideal inelastic tubing will also pull the transducer set into a territory where it loses its clinical utility. However, no tubing is "ideal" - it cannot be a rigid glassy pipe in order for it to remain clinically usable. So: what is the net effect of increasing tubing length in the real world?

Net effect of tubing length on resonance and damping coefficient:
why only 1.2 meters of tubing?

Yes, length of tubing can increase the resonance, and it can also cause overdamping.  The longer the tubing, the lower the natural frequency of the transducer system, so theoretically the more resonance. On the other hand, an excessively elastic length of tubing will cause damping by absorbing the energy of the pressure wave. In other words, longer tubing increases the damping coefficient and lowers the natural frequency. To put this on Gardner's diagram: 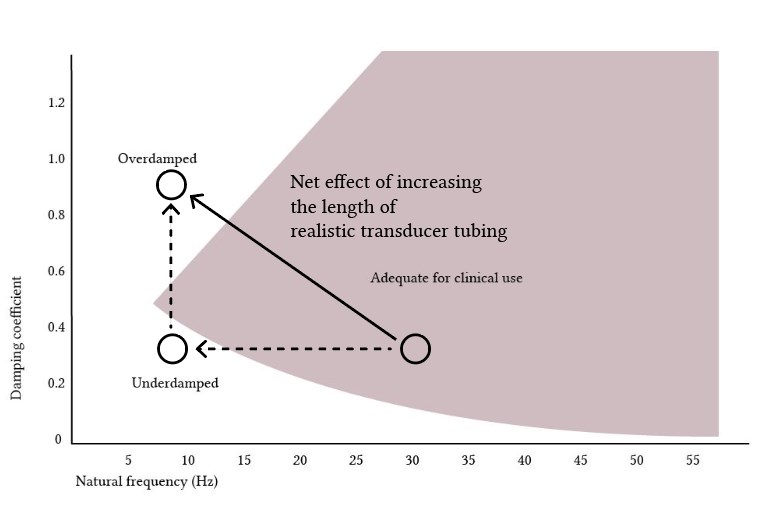 Zeroing and levelling the art line

Zeroing and levelling are occasionally used interchangeably, but they are not the same thing. They tend to occur together in the clinical setting, but the terms describe different processes. Zeroing exposes the transducer to atmospheric pressure via an open air-fluid interface, and levelling assigns this zero reference point to a specific position on the symbolic fluid-filled column that is the patient‘s body.

"Leveling" can be defined as "the selection of a position of interest at which the reference standard (zero ) is set". The canonical college definition is "a process which determines the position on the patient you wish to be considered to be your zero."  For reasons of convenience this tends to happen at the same time as zeroing the system to atmospheric pressure (which also sets the reference "0 mmHg" standard), but theoretically one could zero the transducer to atmosphere and then swing it wildly all around the room before levelling it against a reference point on the frightened patient.

The scientific basis for these reference points is murky, and relates vaguely to the idea that these are also the reference points from which your own pressure transducers (the atrial and arterial baroreceptors) "measure" the pressure for the purpose of maintaining cardiovascular homeostasis. This concept, in turn, relates to the idea of there being a "hydrostatic indifference point" where pressure and vascular wall stress remain stable irrespective of changes in body position, and which appears to be somewhere around the right atrium.  There are actually distinct hydrostatic indifference points for the venous and arterial circulation, and the right atrium is probably not where they are in the normal human (that right atrial location was determined in the 1930s by rotating the bodies of dead animals), but to discuss this here would represent an unforgivable digression. More detail is available in the chapter dealing with the physiological responses to changes in posture. For the purposes of day-to-day use, the arterial line should be zeroed at the "phlebostatic axis", whatever that is.

For every 10cm below the phlebostatic axis, the art line will add 7.4mmHg of pressure.

One may sometimes be interested in levelling the arterial line at another point. Essentially, the level at which you zero the arterial line will measure the arterial pressure at that level. Which means that if your patient is in some sort of unconventional position (eg. sitting bolt upright) you may wish to measure at the level of the tragus instead. An art line levelled at the level of the external auditory meatus will measure the arterial pressure in the Circle of Willis, which is a representation of cerebral perfusion pressure. Various eminent society guidelines recommend that for the use of cerebral perfusion pressure as a therapeutic target, the reference level should be somewhere around the middle cranial fossa.  Whether this matters or not is a subject of some debate.

Apparently, using heparinised saline improves accuracy somehow, but does not prolong patency. Most centres have abandoned this practice because of the increased risk of HITS. The normal rate of flow is 3ml/hr, just to keep the catheter from clotting. The flush rate of the fast flush is 30-60ml/min, so in absence of a good cannula, one can infuse the patient with a litre of flush fluid every 15-30 minutes.

I humbly thank Vincent Chen (President of AACN, I think) for helping me bring some sort of order and accuracy to this set of notes. The quality of this resource is enhanced by his contribution.

From Bersten and Soni's" Oh's Intensive Care Manual", 6th Edition; plus McGhee and Bridges Monitoring Arterial Blood Pressure: What You May Not Know (Crit Care Nurse April 1, 2002 vol. 22 no. 2 60-79 )

Scheer,Perel and Pfeiffer.Complications and risk factors of peripheral arterial catheters used for haemodynamic monitoring in anaesthesia and intensive care medicine. Crit Care. 2002; 6(3): 199–204.
For those who like hardcore physics, this excellent resource will be an enormous source of amusement. It appears to be a free online textbook of anaesthesia.

This FRCA study document on arterial pressure monitoring is a goldmine of detailed information.

Thomas, E., M. Czosnyka, and P. Hutchinson. "Calculation of cerebral perfusion pressure in the management of traumatic brain injury: joint position statement by the councils of the Neuroanaesthesia and Critical Care Society of Great Britain and Ireland (NACCS) and the Society of British Neurological Surgeons (SBNS)." British journal of anaesthesia (2015): aev233.