By Alex Yartsev - Jun 30, 2015
Last updated Fri, 05/14/2021 - 03:41
Topic: Cardiovascular system
All SAQs related to this topic
All vivas related to this topic
This chapter is relevant to Section G7(iii)  of the 2017 CICM Primary Syllabus, which asks the exam candidate to "describe the invasive and non-invasive measurement of blood pressure, including limitations and potential sources of error". The college examiners have never expected their candidates to analyse an abnormal CVP waveform and so the time-poor exam candidate can safely ignore this page and probably all the other pages in this CVP section. There are distinct CVP waveform patterns associated with atrial fibrillation, junctional rhythms, tricuspid valve disease and reduced right ventricular compliance, and one looks clever pointing these out to less informed people, but whether this cardiovascular nous adds significantly to one's performance as an intensivist is debatable.

Because the atrial contraction is responsible for the a wave, loss of atrial contraction results in a missing a wave. Very simple. The baseline in the picture is undulating to represent AF, but in reality this may not be visible because the atrium is contracting in such a feeble and disorganised manner that its activity may not produce any pressure waves whatsoever.

A good example of such disorganised atrial activity is offered below. In a junctional rhythm, the atrial contraction occurs at the same time as the ventricular contraction, which results in a fusion of the a and c waves. Here's an excellent live example of this which was captured by Dr Vidyesh Wakade (a longtime contributor of Deranged Physiology) in a patient recovering from cardiac surgery. The marvellous thing is that he managed to snap a rhythm strip where both sinus and junctional beats are present, to demonstrate how different the waveforms look. 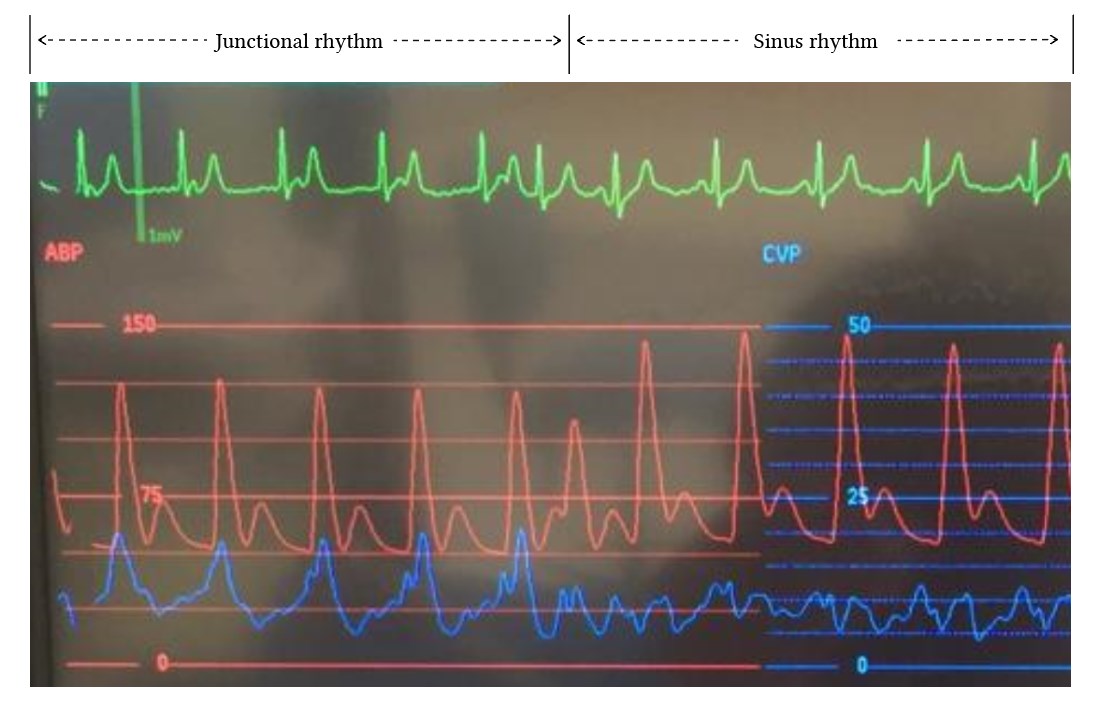 This represents a set of circumstances where the atrium contracts against a closed tricuspid valve, with the force of this contraction being reflected off the valve leaflets, forming a cannon a-wave.

Thus the causes of cannon a-waves are:

The most common clinical scenario where you might see this is in patients with ventricular pacing, as seen here: 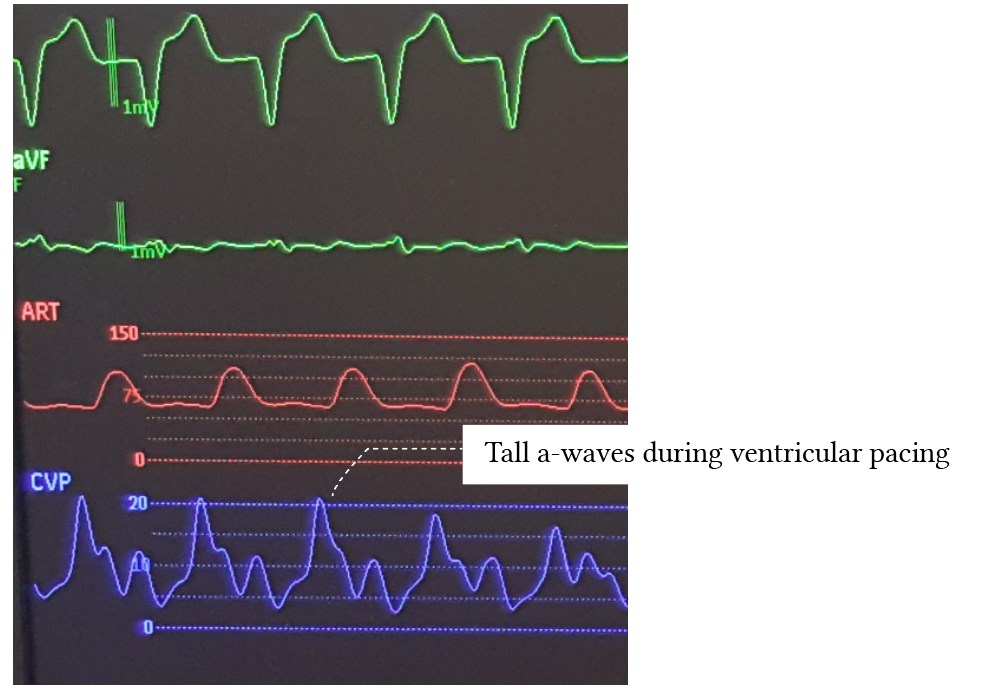 The consequence of this incoordination between atria and ventricles is a haemodynamic disadvantage, as the ventricles are robbed of a substantial amount of preload. The blood pressure may suffer substantially. Observe: in the example offered by my colleague, the systolic blood pressure difference was about 20 mm Hg. 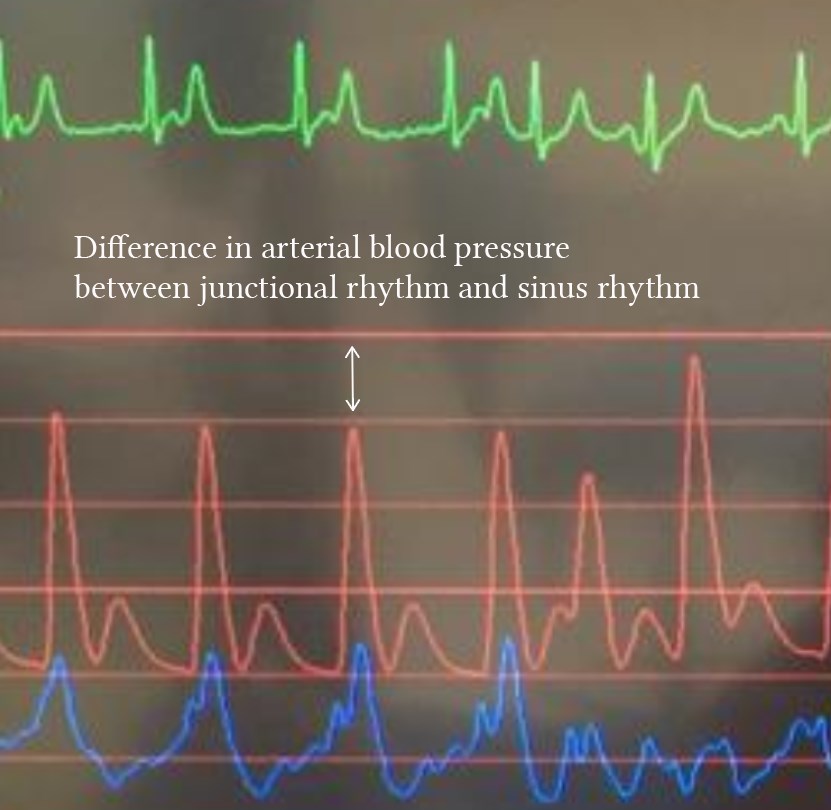 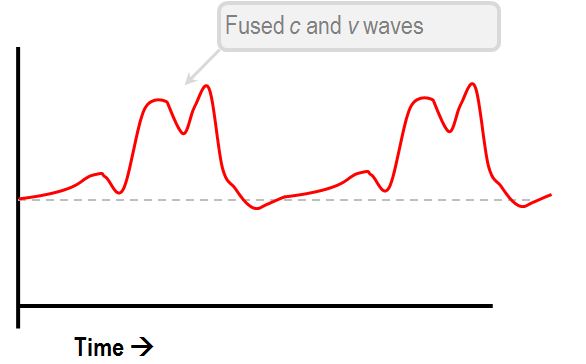 In tricuspid regurgitation, the backflow of blood out of the right ventricle obliterates the normal x descent. The c wave becomes accentuated and fuses with the v wave, as both are the results of right ventricular contraction (and the v wave peak pressure is often the same as the right ventricular peak systolic pressure). Though the diagram above represents these as two politely adjacent peaks, the reality is that they usually fuse completely to produce huge mutant waves, as seen here: 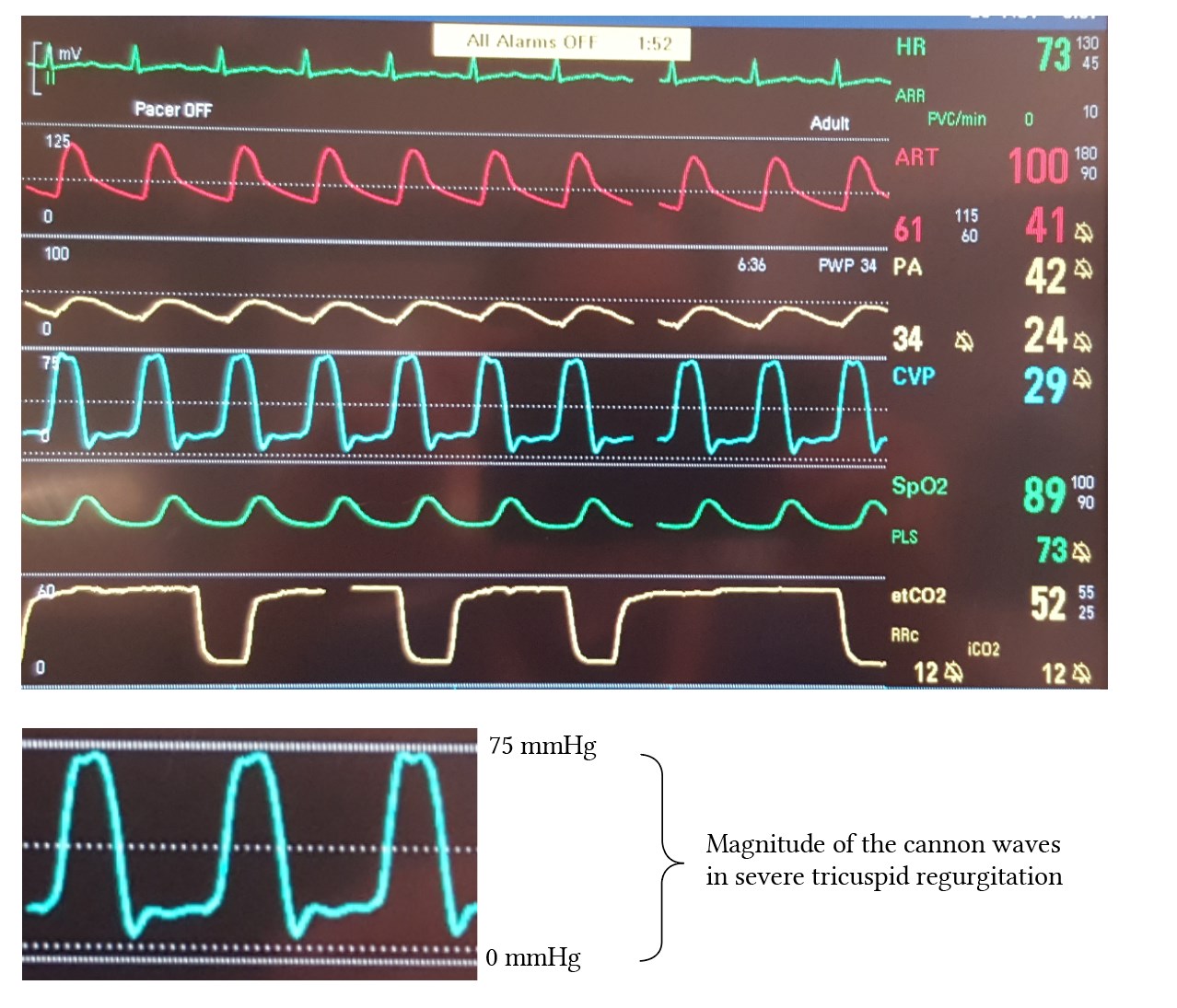 Note that the machine-reported CVP here is hilariously understated. Sure, 29 mmHg might seem like a high CVP, until you look at the scale on the venous pressure trace and realise that the systolic venous pressure is 75 mmHg. The tricuspid valve here was purely decorative, and served no useful function whatsoever.

Tricuspid stenosis produces a large a-wave because of increased resistance to flow from the atrium to the ventricle. The y wave is attenuated (i.e. of longer duration and of lower amplitude) because the right ventricular filling is slow and lazy, without a pronounced change in pressure which would normally occur.

This can also happen in pericardial disease (or anything which results in decreased myocardial compliance), the result of which is a restriction of filling for all the chambers.

Of courser, if tricuspid stenosis can cause these waves, then any loss of compliance ahead of the tricuspid valve can also do this. In this fashion one may have prominent a-waves in the presence of a reasonably normal tricuspid valve, with pulmonary stenosis or pulmonary hypertension.

Thus, the causes of dominant a-waves are

When you see them, they will usually not be particularly impressive. Here, a grainy shot from the author's phone in the noughties demonstrates a prominent a-wave in a patient with a moderately raised pulmonary artery pressure: In pericardial constriction, the CVP will be raised, and the x and y descent is steep and abrupt. This contrasts with cardiac tamponade where the y-descent is prolonged.

Most of this material can be found in From and Soni’s” Oh's Intensive Care Manual”, 6th Edition, as well as the CVC section from The ICU Book by Paul L Merino (3rd edition, 2007)

Additionally, I have made use of the amazing Essentials of Critical Care, 8th ed.(ch.3 - Monitoring in the ICU).

For those willing to pay for it, there is a good UpToDate article on this.