Anatomy of the pulmonary artery catheter

This chapter has absolutely no relevance to the CICM First Part exam or the their primary syllabus document. With the gradually diminishing role of the PA catheter in routine ICU practice, detailed knowledge about this device has been deprioritised. It may still appear in an equipment viva during the Second Part, and so it is perhaps worth knowing. Also, on a slightly less cynical note, one might occasionally want to use this in one's own practice, i.e. this knowledge could turn out to be valuable in a way which is completely unrelated to exams.

Design of the pulmonary artery catheter

Basically, this is just a long piece of PVC tubing with a balloon at the end. Simple as that. The whole point is: with the balloon, you can catheterize the right heart without fluoroscopy. Apparently Swan came up with it while watching sailboats; the correct term ought to be to “sail” the balloon into the pulmonary artery. They inserted it via a cut-down vein in the cubital fossa. After 40 or so dog experiments, they moved on to trial it in 60 humans, with encouraging results. The number of disastrous complications was comparable with the standard of the time (i.e. although in at least one dead patient their catheter was directly implicated as the cause of multiple pulmonary emboli, it was excused because thrombotic complications were par for the course in such patients).

There is little material out there to describe specifically the design and structure of these devices. Swan and Ganz (1970) made theirs from extruded PVC, which still appears to be the case. Their original paper was rather generous with images of the original equipment, which is reproduced here without any permission whatsoever: 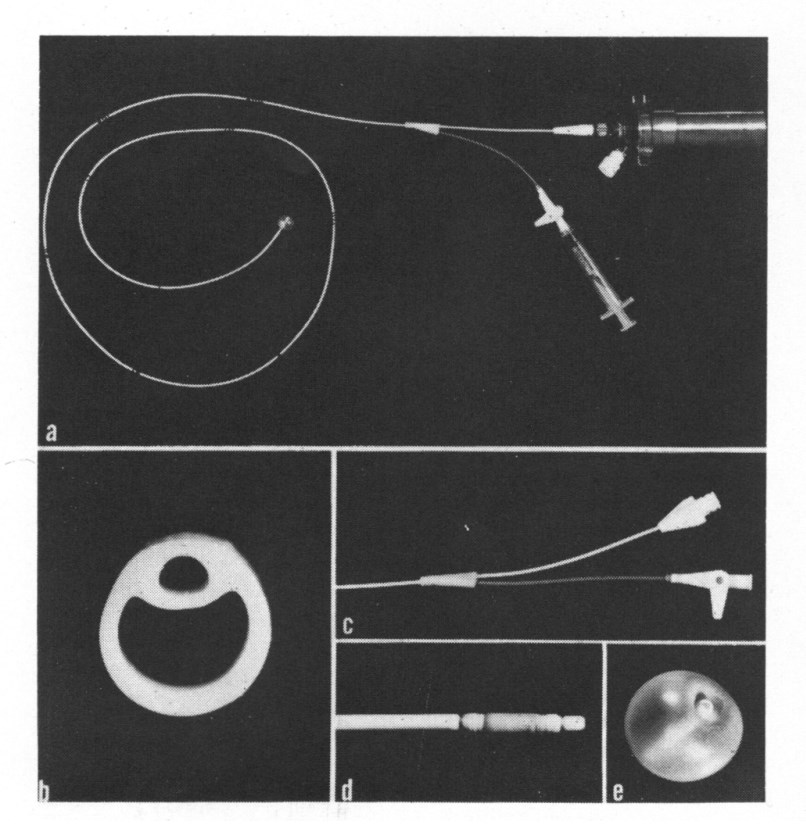 This was a thin 1.7mm (5Fr) line with only two lumens. The picture in (b) is a crossection of the catheter, demonstrating a large blood lumen for pressure measurement, and a smaller circular lumen for balloon inflation. Once it has been pointed out, one can't unsee the smiling cyclops in the image. The balloon was rather small, and had a maximum volume of about 0.8ml, as compared to the relatively generous 1.5ml balloons of the modern era. The authors did not expect to be using this device for indicator dilution cardiac output measurement, and so there is no facility to administer injectate or measure temperature.

Fifty years later, here is a picture of an actual decommissioned catheter from Edwards (2019 model), with all sorts of modern bells and whistles, including a totally MRI-unsafe heating filament for continuous thermodilution measurements. 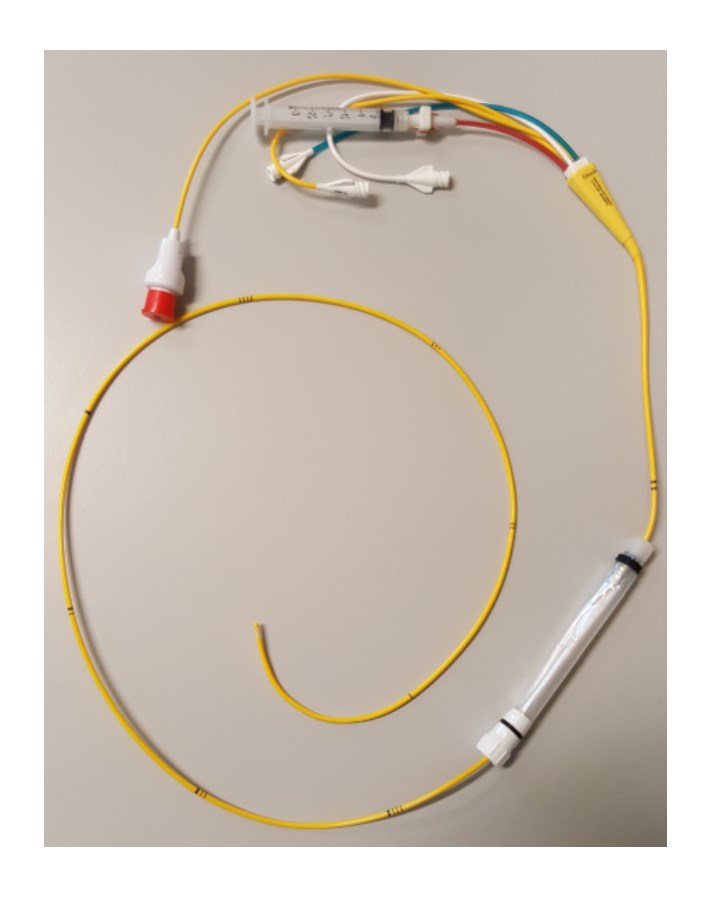 This is a 7-French catheter which is 110 cm long (some other catheters have 90cm versions). These new-fangled models are rather feature-rich, which calls for a nerdy deep-dive.

Let's start with the tip. 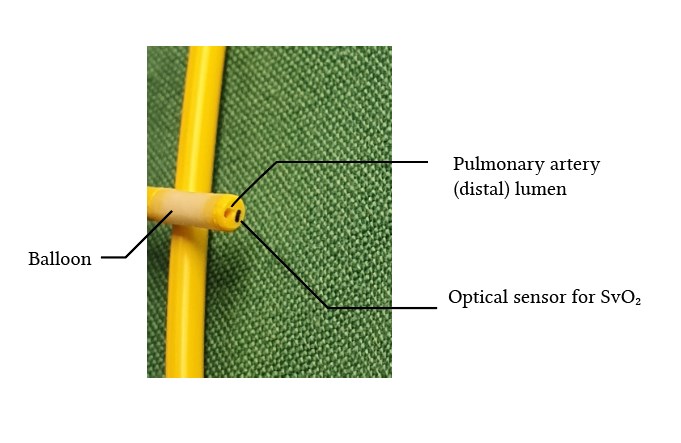 The tip usually only has one open lumen, that being the distal lumen which is used to transduce PA pressure and collect PA blood samples. Theoretically, you could also give fluid boluses and medications through this lumen, but practically this would be insane as it is usually a massively long 21g (0.64mm) lumen, with a maximumum infusion rate of around 6ml/min. The tip of this particular catheter (a 744F75 model) also features an optical sensor for the continuous monitoring of SvO2, if you're a believer in that sort of thing.

The balloon is located at the very tip, so that when it is inflated there is no protruding catheter bits poking out. Supposedly, this design feature minimises possible trauma to intracardiac structures, as the soft inflated balloon-tip should bounce harmlessly off valve leaflets and fragile atrial walls, instead of brutally perforating them as it apparently otherwise would. 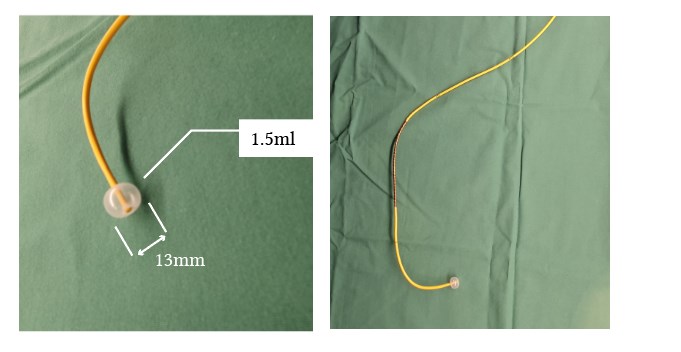 The volume of the balloon is limited to 1.5ml, which blows it up to a diameter of 13mm. It is limited not by any intrinsic property of the balloon, but by the design of the special syringe which comes with the kit. This syyring has little plastic nubs on the inside of the cylinder which prevent the descent of the plunger to any volume beyond 1.5ml. 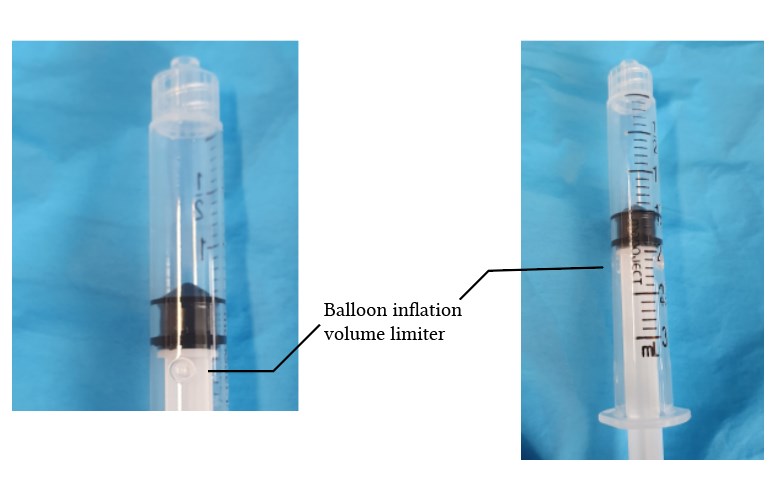 Theoretically, one could overcome this limit by using a completely different syringe, or using this syringe multiple times, in which case the balloon can be inflated to all manner of crazy volumes; but of course this would also be insane. The main objective of this safety feature is to prevent pulmonary artery rupture due to "over-wedging".

Moving proximally, about 4cm from the tip you will find the thermistor which measures the change in temperature of pulmonary arterial blood as it moves past the catheter. It is buried within the PVC structure of the catheter, and you can only barely see its little dark outline if you hold the catheter up to the light: 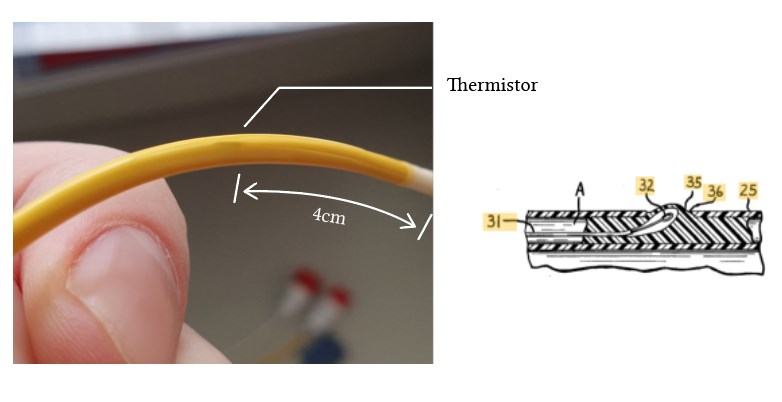 This thermistor, according to the 1976 patent for this technology, is a small resistor which changes its resistance according to temperature, "potted in a plug of adhesive 35 at an exterior opening 36 in the lumen A". All resistors do this to some extent, and the manufacturers would usually select one which is maximally sensitive within a range of temperatures typically seen in the human body. Specifically, the Edwards device has an optimal sensitivity range of 30-40º C, and the packaged monitor system tends to throw errors if measurements outside of this range are collected. It must be encased in the plastic below the skin of the catheter because exposure to water can produce a short circuit and give bizarre readings, not to mention the potentially game-ending effect of intracardiac microcurrent.

The next stop along the catheter is a thin black marker which identifies depth. These markers are positioned along the length of the catheter. 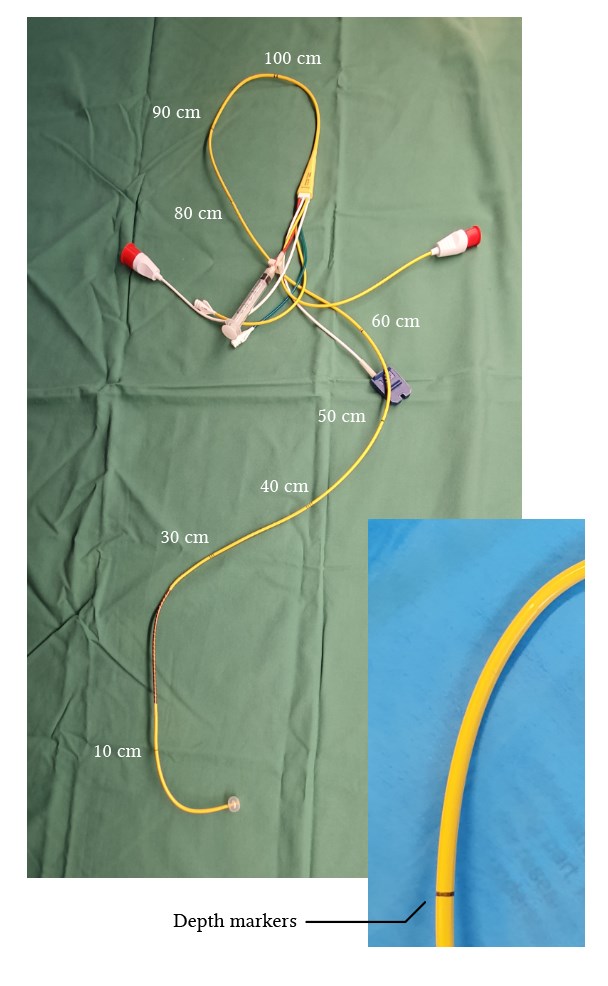 Instead of writing the depth in cm along the catheter length, like for example the PICC line manufacturers tend to, these markers are symbolic (one thin line for 10cm, one thick line for 50cm). The main reason for this is to make them easier to see through the transparent plastic sheath: 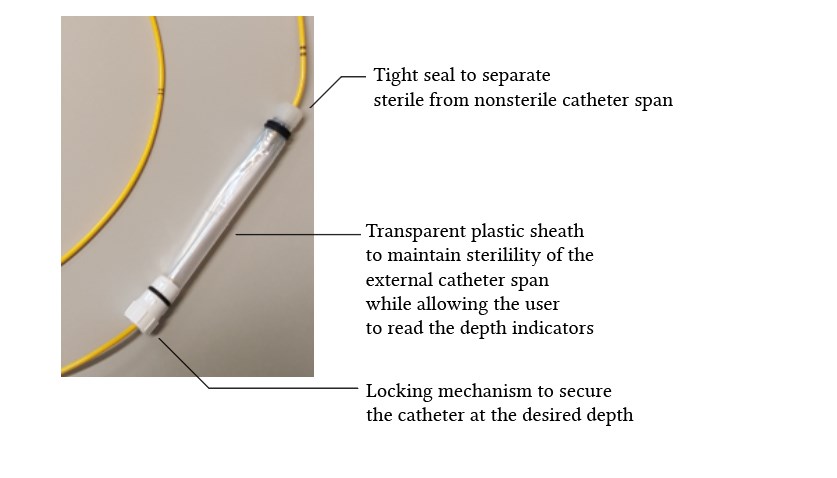 On this model of PA catheter, the next stop is the thermal filament, which is basically a coiled wire at a depth of approximately 15-25cm.

This is the "thermo" element of the continuous thermodilution gimmick which is a major marketing point for this device. The temperature of the filament pulses slowly in some pseudorandom sequence of 30-60 second on-off intervals (to make sure there is no interference from truly regular influences, such as respiration). For safety purposes, the filament is limited to a maximum heating temperature of 44 degrees (Scott, 2016).

The next feature along the catheter length are the proximal lumens. There may only be one (proximal injectate lumen at 26 cm), or there may be two - with a right atrial lumen at 30cm (usually designated as "VIP", or "venous infusion port"). 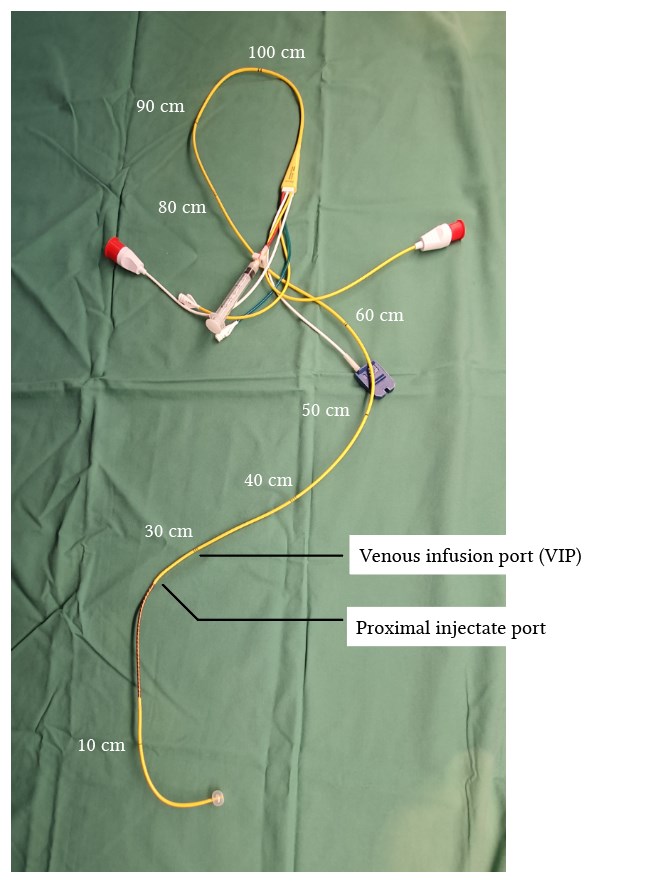 The specific catheter depicted here doesn't actually have a VIP lumen, but its position was labelled on the image anyway, in case the reader has difficulty conceptalising where 30 cm is. From the name and intention of this lumen, this depth (30cm) is where the manufacturer expected the right atrium to be when the tip of the catheter has come to rest in a good position. It is designed for drug administration, which could have a role to play, considering the patient requiring a PA catheter is likely to be in need of multiple simultaneous infusions, and one may run out of lumens.

The hub of the PA catheter separates the lumens and other connectors into a sort of cauda equina of multicoloured tubes and wires. The most common arrangement is depicted below: Important features here include the colour coding of the lumens and the special locking mechanism which permits the tip balloon to remain inflated. The balloon lumen is red, and the boxy connector is sufficiently different from other normal connectors that it should never be mistaken for an infusion port. The injectate lumen is blue (which presumably iindicates that it is intended for cold thermodilution injectate), and the PA distal lumen is yellow (as is the rest of the catheter, and conventionally the catheter waveform).

Incidentally, yellow seems to be the internationally accepted colour for the PA waveform on monitoring, for the PA lumen, and for the PA catheter as whole - as if all manufacturers everywhere had conspired to make them all the same.  It is rather difficult to track down the origins of this convention, but it clearly long-standing. An article from 1984 (Dodson & Newland, from Anaesthesia and Intensive Care) ends with an "Ode to a Swan" by Anonymous, a short poem which addresses the catheter directly as "o wondrous yellow snake". If that colloquialism was so widespread even at this early stage, yellowness must already have been a well accepted common property of these devices. Moreover, it appears some element of herpetology has always been a part of the nomenclature.  Though it is approximately as far as you can get from a legitimate peer-reviewed source, one answer can be found in a comment by Eric Bauer to a blog post by Bruce Hoffman (2018), which seems to suggest that Swan and Ganz took cues from a common saying used to help identify venous snakes in North America. The saying "red touch yellow will kill a fellow" is apparently used to identify the colour patterns of a New World coral snakes, and to tell them apart from the nonvenomous king snake which has adapted a similar colour pattern by Batesian mimicry.

Safety features of the PA catheter

One day, somebody somewhere might ask an exam candidate to identify all the safety features of the PA catheter.

This a full-text version of the seminal paper from 1970:

A manufacturer (Edwards) offers some free information about the PA catheter on their product page.

The PA catheter section from The ICU Book by Paul L Marino (3rd edition, 2007) is a valuable read.