This chapter is relevant to Section G7(iv) of the 2017 CICM Primary Syllabus, which expects the exam candidate to "describe the methods of measurement of cardiac output including calibration, sources of errors and limitations ​​​​​". The indicator dilution method has never been the sole focus of a CICM viva or written question, but it is a ripe low-hanging fruit for viva writers, and they will eventually find it. Moreover, a nerd might also point out that a firm grasp of this concept is essential for the understanding of modern methods of cardiac output monitoring.

For the pragmatic trainee, only some condensed bare minimum is required from peer-reviewed literature. Ehlers et al (1986) give a one-page summary of the main principles, and that is probably all you want if the wolf is at the door. Slightly more detail can be found in the very PAC-centric article by Reuter (2010). Those with ample leisure time and endless appetite for integration calculus will find joy in Profant et al (1978) and Valentinuzzi et al (1969).  For a bit of culture and history, the process by which we arrived to the modern version of this principle starting from Stewart's dog experiments is beautifully detailed in a retrospective by Argueta & Paniagua (2019).

At a basic level, the indicator dilution technique determines the rate of flow from the rate of change in the concentration of substance after a known amount of it has been added to the bloodstream. In pre-digested point-form, this concept can be explained as follows:

This "known substance" could potentially be anything. In fact, it does not even need to be a substance; or rather, it is possible to just change the characteristics of the blood itself, and to then measure the rate of change in that characteristic. Options include:

The latter (i.e. changing the temperature characteristics of a volume of blood by heating or cooling it) is a favourite technique because it does not require the adding or subtracting of anything from the bloodstream, and therefore bypasses the possible safety/toxicity caveats to the use of chemical indicators.  Instead of indicator dilution, you'd call that "thermodilution", and discuss it in a chapter which specifically references the pulmonary artery catheter.

But let's get back to those indicators. The "known substance" is usually indocyanine green, a benign dye which is strongly protein-bound and has a very rapid (~ 150sec) hepatic clearance. Using its handy greenness, a crude diagram could also be used to illustrate this concept: The end result, for the experimenter, would be a concentration over time curve, which looks like this: 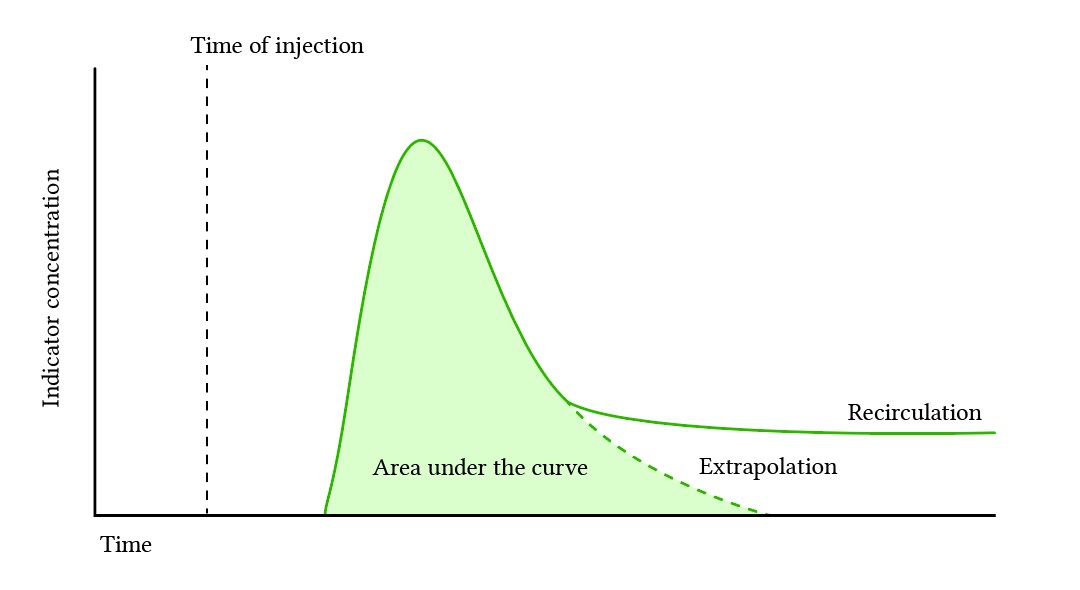 As you injected the indicator upstream, its circulation past the detector is delayed somewhat. Then, the bulk of the indicator swims by, creating a nice curve. At the end, there is a long tail to this graph, which will eventually reach zero; however under most circumstances, the indicator is not eliminated over a single circulation time, and so the graph will not reach zero, as indicator molecules coming back through the circulatory system will still be detectable. Thus, the curve needs to be extrapolated, as you are really interested in a single indicator dilution circulation.

Derivation of cardiac output from the indicator dilution curve

The graph described above basically describes a change in concentration over time. Let's digest that for a moment. Or, better yet, with the aid of an excellent article by Valentinuzzi et al (1969), let's digest this very very slowly over a thousand years.

Or, if you were to rearrange for volume,

Now, in the circulation, volume is moving, which is basically flow, or volume divided by time:

Since the volume into which the diluent is also moving, and V  = m/C,  the indicator-laden flow of diluent can be expressed as:

That's obviously only applicable to a system enjoying constant flow,  rather than then pulsatile abruptness of the human circulation, but it is enough to demonstrate the principle: flow of indicator is equal to the dose of indicator divided by the concentration multiplied by time. Fortunately, the concentration/time graph produced by the detector gives us the latter variable (Ct), as it is the area under the concentration/time curve. Thus, flow (let's call it cardiac output, at last) can be represented as follows:

This is the basic premise of indicator dilution methods of cardiac output measurement, and this equation is a massively oversimplified form of the Stewart-Hamiltion equation, which will be the topic of the next section.

The whole concept originated from some experiments by George Neil Stewart, who was trying to measure the cardiac output of dogs. At this stage, there was no cardiac output data available for anybody, making this something of a pioneering step. "We possess very few accurate data for determining the quantity of blood that passes through the cavities of the heart in a given time, or is discharged at each beat", Stewart complained. This first series of experiments used a 1.5% sodium chloride solution, the passage of which through the bloodstream was detected by means of a Wheatstone bridge transducer - as the saline changed the electrical resistance of the blood. In this original paper, the description of the method was actually rather secondary to the measurement of the blood flow, and most of the results section focused on the cardiac output findings (Stewart reported them as a fraction of body weight per second, which was the fashion at the time).

There was certainly nothing in this first paper by Stewart which might have resembled the modern form of the equation. That came later,  from William F Hamilton, or more specifically from an article he co-authored (Kinsman et al, 1929). These investigators were using various dyes (eg. brilliant vital red or T-1824, which is Evan's blue), injecting them into the venous circulation and then recording their concentration at the radial artery in an early form of transpulmonary dye dilution.  Their formula looks familiar to the modern reader:

This called for spot measurements of concentration, taken at different time intervals during the first dye dilution curve. The reason intermittent points were chosen was purely pragmatic: "the mathematical operations of integrating the whole curve are so complicated that for practical purposes it was thought best to average readings taken from it at finite intervals." However, the authors freely admitted that "for strict mathematical accuracy, the curve should be integrated". With the advent of electronics, the calculation became automated and the formula could afford to mutate into its complex modern form:

Or at least that's the form it takes when you use it to perform thermodilution measurements of cardiac output, which is where one would typically encounter it. Specifically, this version of the equation (which is frequently seen in textbooks and which was reproduced in Part One) relates to the old-school method of measuring thermodilution curves by manually printing them on graph paper,  and can be traced all the way back to Frone & Ganz (1960). They had to make adjustments for the specific heat and specific gravity of dog's blood ("spec, heat 0.965 cal./Gm., spec, gravity 1.018 Gm./cm.3 "), and that is also where the k2 constant comes from (the recorder had to be calibrated against an injectate of a known temperature). These days this constant has been replaced by a correction factor which is supplied by the manufacturer of each individual piece of cardiac output monitor equipment, accounting for a whole host of empirically determined factors like the amount of injectate still lect in the PAC lumen and the rate of heat loss through the catheter wall during injection.

Classical descriptions of indicator dilution cardiac output measurements explicitly reference the use of indocyanine green, a relatively benign substance which binds tightly to proteins in plasma and becomes basically confined to the circulatory system, in terms of its distribution. It is a fairly safe option even up to doses of around 60mg/kg, except for the fact that it can cause anaphylaxis, and that under the influence of UV light it seems to decompose into god only knows what. Those things aside, it is a great dye for indicator dilution, as it has peak spectral absorption of light at a near-infrared wavelength of about 800 nm, making it easy to detect. One can usually just use a transcutaneous probe, similar to a pulse oximeter, which is usually placed on the ear.

So, that's how you can measure cardiac output without having to dick around with mixed venous gases or collecting every last millilitre of exhaled breath into billowing gas bags. But is it relevant? If these methods of cardiac output monitoring are so good, then how come, at this stage the CICM trainee might ask, have I never seen indocyanine green at the bedside table of an ICU patient?  In short, what is the point of knowing about all this stuff?

Well. Though dye dilution is basically limited to laboratories and PhD candidates, dilution of other sorts is still in popular use. Even after 15 years since the PAC-MAN trial, the Swan Ganz catheter is still not dead somehow, and intensivists are still sometimes expected to interpret cardiac output produced by thermodilution. Transpulmonary thermodilution by PiCCO also lives on. Apart from temperature-based measurements, indicator substances such as lithium are used by various proprietary haemodynamic monitoring systems (eg. LiDCO). In short, there is still some reason to know about this seemingly ancient method of cardiac output measurement, even though it might seem like a historical footnote in this echo-heavy era.

But is it accurate? "Good enough for government work" would be a better way to describe it. Hamilton et al,  in 1948,  measured direct Fick and dye dilution cardiac output values and found that they agreed only within 25%; in other words, a 5.0 L/min cardiac output could in reality be 3.75 L/min or 6.25 L/min, which does not sound particularly encouraging. Numerous sources of error exist, which can alter the measurements and produce a falsely depressed or falsely elevated value. Consider the number of variables in the thermodilution variant of the Stewart-Hamilton equation, including all the empirically derived fudge factors - any of these can be wrong, leading to markedly different results. It would be tempting to go into these right here, but the feng shui is all wrong. Thermodilution is the most usual indicator dilution measurement method, and it has a series of unique caveats which are often the topic of exam questions, whereas dilution measurement in a broader sense is much less popular. Thus, somewhere else there is an entire chapter dealing with the causes of inaccurate thermodilution cardiac output measurements, and here it will suffice to say that the precariousness of these measurements is enough to discourage many people from relying on these devices.

Stewart, George Neil. "Researches on the circulation time and on the influences which affect it." The Journal of physiology 22.3 (1897): 159.

Valentinuzzi, M. E., L. A. Geddes, and L. E. Baker. "A simple mathematical derivation of the Stewart-Hamilton formula for the determination of cardiac output." Medical and biological engineering 7.3 (1969): 277-282.

Frone, A., and V. Ganz. "Measurement of flow in single blood vessels including cardiac output by local thermodilution." Circulation Research 8.1 (1960): 175-182.