This chapter is directly relevant to Section G7(v) of the 2017 CICM Primary Syllabus, which expects the exam candidate to "Explain the derived values from common methods of measurement of cardiac output including transpulmonary thermodilution and pulse contour analysis devices (e.g. variables such as EVLW, GEDV, SVV in addition to CI, SVI, SVRI, LVSWI etc.)​​​​​". That in itself would be a ten thousand word treatise,  but the "etc" stretches it out into something truly monstrous. Consider this print out spat from a mid-range  PA catheter output manager system, integrated with the monitor software and ventilator: 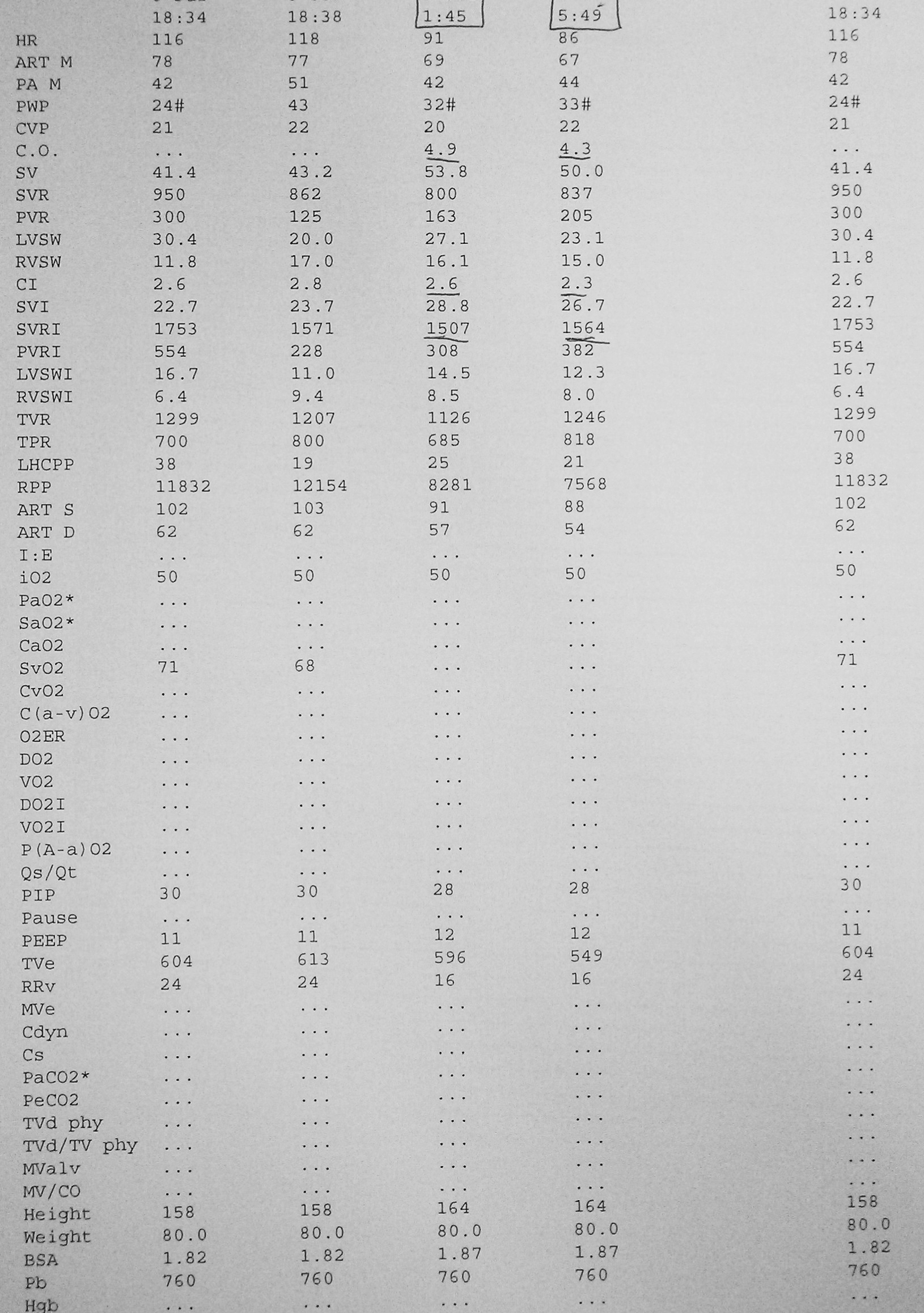 Confronted with this superabundance of abbreviations, most ICU trainees would immediately stop reading, having concluded that there is no merit in learning anything about them, as no exam anywhere could possibly ask for any detail at this level of granularity. And they would be correct in this, with the exception of SVR, which is the one variable that has been asked about repeatedly. Multiple questions from the Part 2 exam have required, directly or indirectly, for the trainee to calculate the SVR:

Out of respect for people who are looking for a quick answer, the SVR equation is:

And for the rest, equations and short descriptions are listed below, in case anybody ever needs to know this stuff. Helpfully, this content can also be found in many other places, most notably this LiDCO propaganda flier, or this paper by Wigfull & Cohen (2005).

The pulmonary catheter (even an extra-fancy one) only measures a few variables directly:

Additionally, other measured variables from various sources are usually fed into the monitoring equiment interfacing with the PA catheter, which can then be used to generate even more derived numbers. These added variables are usually:

From these, a thousand derived factors can be pointlessly generated.

On the indexing of haemodynamic variables

It is intuitively understood by all critical care staff that a cardiac output of 5L/min is normal for a 70kg standard human, but vastly excessive for a little mousey teenager and is totally inadequate for a morbidly obese ex-footballer. Indexing of such variables to body size is therefore required, so that they can be compared between patients, and against expected normal range values.  This idea came about in the 1930s, and its origin is generally attributed to Arthur Grollman, who described it in his 1932 book, The cardiac output of man in health and disease. Reviewers lauded the stability of this variable across many different individuals at basal conditions, and it clearly has some longevity in medicine, as we keep using it even to this day, over ninety years later.

Indexing works by taking a measured variable and dividing it by some parameter related to the patient's body size. One could potentially use body mass as that parameter, but this would probably lead to various errors. The human body, as it gains weight, does not gain it proportionally - most of the gained mass is gained as fat, and fat is not a particularly hungry tissue from the standpoint of metabolic need.  The blood supply required by adipose tissue is therefore only about 2-3 ml/100g/min (which is discussed in greater detail in the chapter on the cardiovascular consequences of obesity).  In short, the normal expected blood supply requirements of a person with a vast overabundance of fatty tissue would not be a direct mathematical scaling of a lean person's metabolic demand, if weight was the multiplier. For this reason, we tend to use body surface area (BSA) when we "normalise" haemodynamic parameters by indexing them.

The BSA is an index of body size calculated using total body weight and height, usually by using Mosteller's formula:

The use of BSA is still an imperfect method of indexing haemodynamic variables, and may break down in various extremes. The morbidly obese, for example, can have an elevated BSA which could potentially decrease their cardiac index to the point where it ends up below the normal expected range, whereas their cardiac output might actually be quite sufficient for their body (Adler et al, 2012). Similarly, children have a higher metabolic rate and a low BSA which means their cardiac index measurement can appear normal but be in fact inadequate to meet their needs. An alternative is to use non-indexed values, or to use the BMI as another method of indexing for body size. Stelfox et al (2006) reported  there should be an extra 1L/min of cardiac output per every 12.5kg/m2 of BMI above the normal range.

And now, without further ado,

This list is by no means exhaustive, and the amount of detail included in it is minimal. In creating it, the author had assumed that nobody would ever be interested in this material, for any reason. However, just in case, links are provided, either to local resources or peer-reviewed papers. The normal values come from this counterintelligence by Edwards Lifesciences.

The normal values, and all these equations (plus many many more) can be found here, at the LIDCO group "Normal Hemodynamic Parameters" page.

Cournand, A. R., et al. "Measurement of cardiac output in man using the technique of catheterization of the right auricle or ventricle." The Journal of clinical investigation 24.1 (1945): 106-116.

Grollman, Arthur. The cardiac output of man in health and disease. CC Thomas, 1932.