This chapter is probably relevant to Section G8(iii)  of the 2017 CICM Primary Syllabus, which asks the exam candidate to "understand the pharmacology of anti-hypertensive drugs".  Calcium channel blockers, like beta-blockers, straddle the antihypertensive and antiarrhythmic functional classifications. So as not to duplicate content, insulting the reader with repetitive material, the antiarrhythmic properties of these drugs will be carelessly disregarded in this chapter. The main focus will be on common properties of these drugs, and in particular on producing some sort of structure which might help the candidates answer future questions, as lamenting a lack of structure seems to have been the most common college examiner comment.

Historically, the SAQs on calcium channel blockers have not asked anybody to compare between the properties of drugs from the same class, but rather to "describe the pharmacology"

Godfraind (2017) is probably the best reference for structure/function relationships, which makes some sense given that Theophile Godfraind is basically the father of modern calcium channel blockers, working in the field since 1960s. He also published an excellent thing in 1994 which is still the best resource for a discussion of calcium channel blocker cardioselectivity, and which happens to be free from Springer.  For pharmacokinetics, one can't go past Kelly & O'Malley (1992), and for the mechanism of action and clinical effects Abernethy & Schwartz (1999) is the most concise paper, though unfortunately paywalled by NEJM.  The trainees are reminded that the detailed scrutiny of these references in the pursuit of a comprehensive knowledge of calcium channel blockers should not be viewed as an effective use of their final pre-exam hours, as the grey box above probably already represents something well in excess of the expected minimum knowledge.

An excellent peer-reviewed account of how these drugs were discovered and developed can be found in Drapak et al (2017) and Godfraind (2017), made more authentic by the personal involvement of the latter. In short, we have this class of drugs because back in the early 1960's a whole series of Big Pharma giants threw money at the problem of finding new any-anginal agents. Specifically, they were looking for coronary vasodilators, armed with some new research frameworks outlined by Arunlakshana and Schild (1959). Ultimately, as the result of this broad screening of multiple molecules,  Bayer gave us dihydropyridines, Tanabe gave us diltiazem, Knoll produced verapamil, and Janssen Pharmaceutica produced a whole series of vasoactive substances which went nowhere (lidoflazine, cinnarizine, flunarizine).

Anyway. The history of calcium channel blockers is tied closely to the history of calcium channel research, and verapamil already existed in some nameless form even in the early 1960s, as a substance which was known to mimic the effects of severe hypocalcemia on myocyte cultures. From the first available agents (verapamil and nifedipine), the main improvements in chemistry have focused on producing drugs which were longer-acting, allowing for once-daily dosing.

Several other agents are on the market (felodipine, nicardipine, isradipine, etc), but their market share in Australia is smaller, and moreover it was felt that all the dihydropyridines are so very similar that from an educator's perspective it would be pointless to list them all. As such, only drugs with specific applications (nimodipine) or curious pharmacokinetic weirdness (clevidipine) will be singled out for discussion here. Also, amlodipine, because according to Eliott & Ram (2011) it accounts for about 70% of calcium channel blocker sales. There is not much to know about the pharmaceutics of these drugs, except that all of them (with the exception of diltiazem and nifedipine) are sold as racemic mixtures, where one of the stereoisomers has absolutely no activity.

Routes of administration and GI absorption

Diltiazem, verapamil, nimodipine have alternative IV formulations, and clevidipine is the only one which is not available as a tablet. Their other pharmacokinetic parameters, listed below, come from Kelly & O'Malley (1992) where Tabel II also lists the references from where these numbers were derived. Clevidipine was not available in 1992, so those data were extracted from Nordlander et al (2004). Everywhere else, (potentially broken) links point to the relevant resource;.

These data have implications for their clearance in severe toxicity. Dialysis is unlikely to get rid of enough molecules to make much of a difference over a reasonable timeframe. However, the high lipid solubility of some of these drugs (eg. amlodipine) has prompted some authors to recommend a lipid emulsion as an antidote. Sebe et al (2015) reported on three years of experience (15 patients) and described the results as positive, in the face of a 20% adverse event rate.

The lipid solubility of these drugs also has some non-toxicological relevance. Zweiten (1998) discussed that, with the increased distribution of these substances into the lipid bilayer, membrane depots should theoretically form, which should therefore lead to a longer duration of action and slower onset of activity. This is a good segue to...

Half-life and duration of effect

The time to peak effect and the elimination half-life are mainly from Abernethy & Schwartz (1999):

As you can see from this table, the elimination (plasma) half-lives of these agents are completely unrelated to the duration of their clinical effect. For example, lercanidipine has a relatively short half-life, but because of its high lipid solubility it forms a lipid depot and associates with its target for longer, which means it only needs to be taken once daily.

Out of these drugs, clevidipine is clearly an isolated abnormality, owing to its extremely rapid hydrolysis by plasma esterases. Which brings us to the topic of metabolism:

Kelly & O'Malley (1992) have this excellent table which summarises the pharmacokinetics of then-available drugs.

CYP 3A4 is important to mention, because it is the pharmacokinetic workhorse of the liver. Fully 50% of routinely used xenobiotics end up being metabolised by this enzyme isoform. It is important to point out that verapamil and diltiazem also act as inhibitors for CYP 3A4,  in addition to relying on it for their clearance.

Why is is this miniscule detail being mentioned here? Well. Question 8 from the second paper of 2017, which was all about nimodipine, specifically asked for an answer "including important drug interactions". Thus, following from the above, the metabolic clearance of nimodipine would be increased by phenytoin, rifampicin and corticosteroids, and decreased by diltiazem, verapamil, erythromycin, and grapefruit.

There's a couple of ways to classify CCBs. One way would be to draw a functional divide between agents which are mainly cardioselective and agents which are mainly vasodilatory. That way, you would end up with a dihydropyridine group and a non-dihydropyridine group.  This is what many textbooks tend to do. Judging by the college answer to Question 17 from the second paper of 2011, the examiners wanted us to subdivide things even further, and separate the cardioselective group into phenylalkylamines and benzothiazepines:

For some reason, the examiners had offered numbered Types instead of chemical classes ("Type I :
Phenylalkylamines eg verapamil, Type II : Dihydropyridines eg nimodipine and Type III :
Benzothiazepines eg diltiazem"). This seems to be an alternative naming strategy which you only see in some of the older papers (eg.  Singh, 1986), and it will not be used here because it fails as nomenclature (i.e. numbered class names describe nothing useful) and because it might breed confusion with the already confusing number-based classification of antiarrhythmic agents.

Anyway: structure and function. The best resource for this was a 1991 article by David Triggle, which is fortunately available in full text. In short, each of the abovementioned classes is chemically distinct from the other, which makes them somewhat difficult to discuss. Dihydropyridines are relatively easy, because these are a large group of molecules which all share a common structure. There's a phenyl ring with a variable substitution position, and two groups at the C3 and C5 positions. The latter seem important - the substitution of NO2 for CH3 here turns isradipine into a calcium channel agonist. 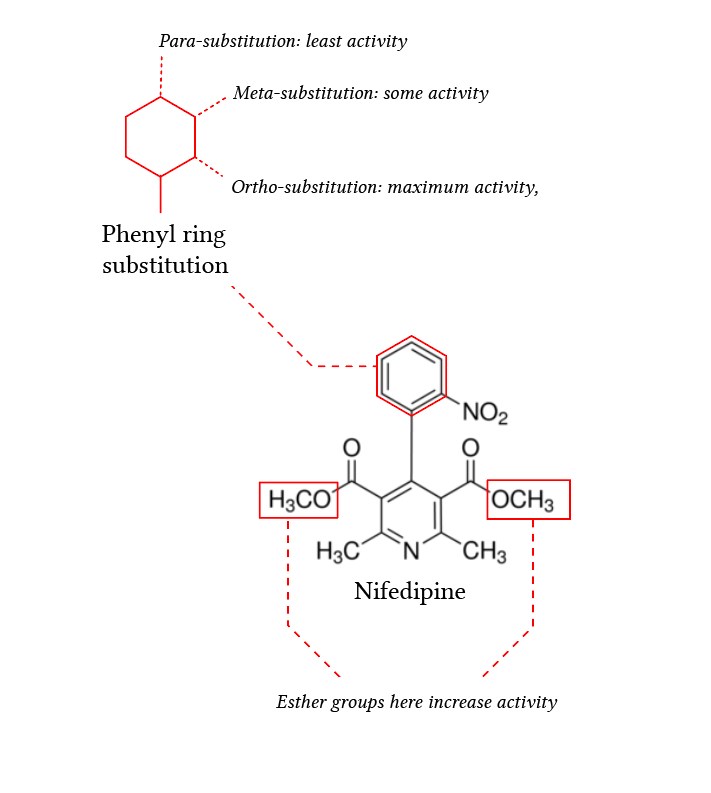 Which brings us to...

One can summarise this whole section by saying that calcium channels are a complex pore-forming transmembrane protein, and all the commercially available calcium channel blockers interfere with its activity in one of three distinct ways. It is possible to go completely mad with detail here, but all you really need to know is summarised in the second paragraph of Abernethy & Schwartz (1999). In short:

Different classes of calcium channel blockers interact with their targets in slightly different ways, which explains their selectivity and different clinical effect:

To briefly recap the physiology of L-type calcium channels:

Abernethy & Schwartz (1999) are again probably the best resource for a detailed overview of this topic. For the ICU trainee, their elaborate digressions on various outpatient antihypertensive therapy trials are probably irrelevant.

Singh, B. N. "The mechanism of action of calcium antagonists relative to their clinical applications." British journal of clinical pharmacology 21.S2 (1986): 109S-121S.

Morel, Nicole, and Theophile Godfraind. "Characterization in rat aorta of the binding sites responsible for blockade of noradrenaline‐evoked calcium entry by nisoldipine." British journal of pharmacology 102.2 (1991): 467-477.

Kishor, S. "A COMPLETE GUIDE ON THE PHARMACOLOGIC AND PHARMACOTHERAPEUTIC ASPECTS OF CALCIUM CHANNEL BLOCKERS: AN EXTENSIVE REVIEW."