This chapter is (barely) relevant to Section G8(iv)  of the 2017 CICM Primary Syllabus, which asks the exam candidate to "understand the pharmacology of antiarrhythmic drugs".  These are a favourite of the college. For a variety of fairly commonsense reasons, there is an emphasis on testing the trainee's understanding of these drugs, as they are at the same time common, powerful, dangerous, and often poorly understood.  However, historical CICM examiner focus has been interestingly narrow:

Do you notice a trend here? There is clearly some thirst among the examiners for a) certain iodinated compounds and b) cardiac glycosides. Owing to this clearly preferential treatment, each of these drugs has been given a chapter of its own, all the better to be familiar with their properties. The other agents have been piled unceremoniously into the wastebasket chapter below, mainly because the topic of antiarrhythmic classification has only ever appeared in one SAQ.  What follows is a merciless oversimplification of a fascinating topic, but even this is probably excessive, as the college clearly just wanted people to earn three marks by dumbly listing the Vaughan Williams classes.

Realistically, the revising exam candiate would find that the Part One entry contains all the essential information required to pass these SAQs. It also helps that it is presented in a highly condensed form, free from verbal greebles and nurnies. For something published in a respectable journal (i.e. one which you have to pay to get published in), one could use something like Capucci et al (1998). This probably represents some sort of maximum of what a normal exam candidate should be expected to absorb. On the other hand, for the reader with an infinite capacity for minute pharmacological detail, the 1998 report by Carmeliet & Mubagwa will satisfy even the hungriest brain parasites. It is 72 pages long, and dense like a neutron star.

For the purposes of studying for the CICM First part exam, there is really only one system. One might occasionally hear it being referred to as the "Vaughan and Williams" or "Vaughan-Williams" classification, which is, of course, inaccurate because it is named after Miles Vaughan Williams, the celebrated pharmacologist and ninety-year-old fitness guru. His classification system was first presented in April of 1970, at the Symposium on Cardiac Arrhythmias in Elsinore, Denmark (yes, that Elsinore). The original 826-page symposium is not available electronically, and the nearest physical copy lays 110km north of the author, at the University of Newcastle Auschmuty Library. Fortunately, five years later, it was incorporated into a textbook, through which archaeologists can discern its original shape.

It seems like a possible fourth class was also being considered in 1975, as verapamil had recently appeared onto the scene and had clearly demonstrated antiarrhythmic properties. However, it was not formally added at this stage.  In fact, like everything that gets incorporated into a textbook, this three-class system turned out to be extremely tenacious and remained basically unchanged well into the 1980s even as novel agents were developed and new physiology research had come to light.  The next reassessment of the Vaughan Williams classification was his own (1984), where he rephrased the class definitions, added calcium channel blockers, and further subdivided Class I into Ia, Ib and Ic on clinical grounds:

However, the modern reader will readily point out that not only do we have multiple other agents currently used to treat or prevent arrhythmias, but there are also many agents which were already well established in he 1980s (eg. digoxin) which seem to be unfairly omitted from this classification system. Moreover, many among the listed drugs have multiple effects across multiple classes (famously, amiodarone).  In response to these shortcomings, Rosen & Schwartz (1991) offered to reclassify antiarrhythmic drugs without trying to pigeonhole them into limiting categories. They called their system "The Sicilian Gambit",  in reference to an opening chess move which involves the sacrifice of pieces in order to achieve a strategic advantage. Confusingly, they called it "Sicilian" because the European Societ of Cardiology met in Sicily that year, and not because of the Sicilian defence which is another popular opening move.  These random details notwithstanding, the authors had a rather noble purpose: to bring the classification of antiarrhythmics out of its Vaughn Williams disarray, and to present the agents in a spreadsheet which illustrates their multiple simultaneous effects, like so: 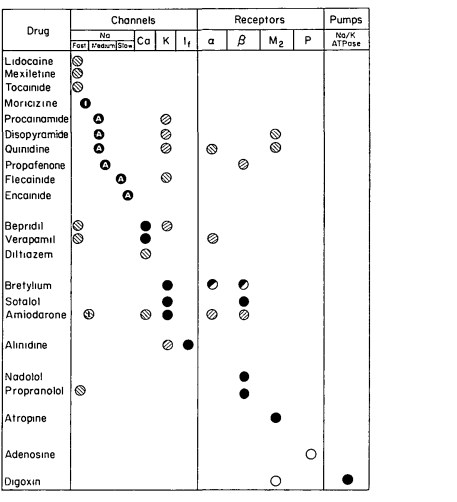 Unfortunately, judging by the limited acceptance of this schema, it appears that everybody else had preferred disarray.  To illustrate how much this is the case, one is directed to the last entry into this saturated field, made by Lei et al (2018), on the centenary of M. Vaughan Williams'  birth. Their system is well-reasoned, comprehensive, inclusive of all existing agents, and therefore unwieldy and awkward:

This system is reproduced here mainly because of the authors' fondness for awkward things, and in the hope that it one day finds more recognition than it currently has. One must remember that the official college textbook (and basically all the other influential material on this topic) were published before 2018 and will therefore be parroting the 1984 version of the Vaughan Williams classification. Moreover, many of the CICM Part I examiners will have trained during this time period and will have some nostalgic fondness for the old system. Therefore, the trainee is advised not to startle these people with any unnecessarily modern concepts. One should not present oneself as a dangerous radical anarchist during one's pharmacology viva. It is in this counterrevolutionary spirit that the rest of this discussion will be conducted.

Anyway.  From the emphasis on mechanisms of action which is inherent in this classification system, it follows that the only logical way to systematically discuss these agents is to start with their pharmacodynamic properties, and to handle the boring pharmacokinetics as an afterthought and shadow. This would be fairly consistent with college expectations, as they really only ever seemed interested in the ADME of amiodarone and digoxin, and those are handled separately.

Origins and mechanisms of arrhythmic and antiarrhythmic effects

To paraphrase the entire chapter dealing with abnormal cardiac electrical activity, as well as Grant (1992) and Barrio-Lopez (2020), arrhythmias arise because of:

Now, for each class, some sort of short point-form summary of pharmacodynamic properties will be attempted, mainly in case one day these drugs become the topic of an SAQ. This has already happened to Class I agents in Question 9 from the second paper of 2012, which means that these are probably fair game.

Class I agents are sodium channel blockers. They generally bind to a site inside the pore of the Nav1.5 subunit of the fast voltage-gated sodium channel, which is responsible for Phase 0 of the cardiac action potential. All prefer to bind to open or inactivated sodium channels (though the slowly dissociating Class Ic agents remain bound even when the channels return to their resting state). Speaking of which, this class is further subdivided into subclasses according to what the drugs do to the action potential and what dissociation kinetics they have:

The antiarrhythmic effect is felt in multiple ways:

There is also a sub-classification of beta-blockers, one of which can be mentioned here:

Though most of the antiarrhythmic effect comes from their β1 effects, one needs to mention that some of these drugs have sodium channel blocker properties (propanolol) and others block potassium channels (sotalol).  However, they do not need those effects. Beta blockade has a rather diverse and potent effect on multiple cardiac ion channels, as listed in this table paraphrased from Dorian (2005):

So, from a glance at this, one might surmise that beta-blockade favours rapid repolarisation of the membrane, supports currents which maintain its polarity, and opposes currents which promote depolarisation. Again from Dorian (2005), this slightly altered diagram of the beta-blocked cardiac action potential illustrates the net effect of these ion current changes: 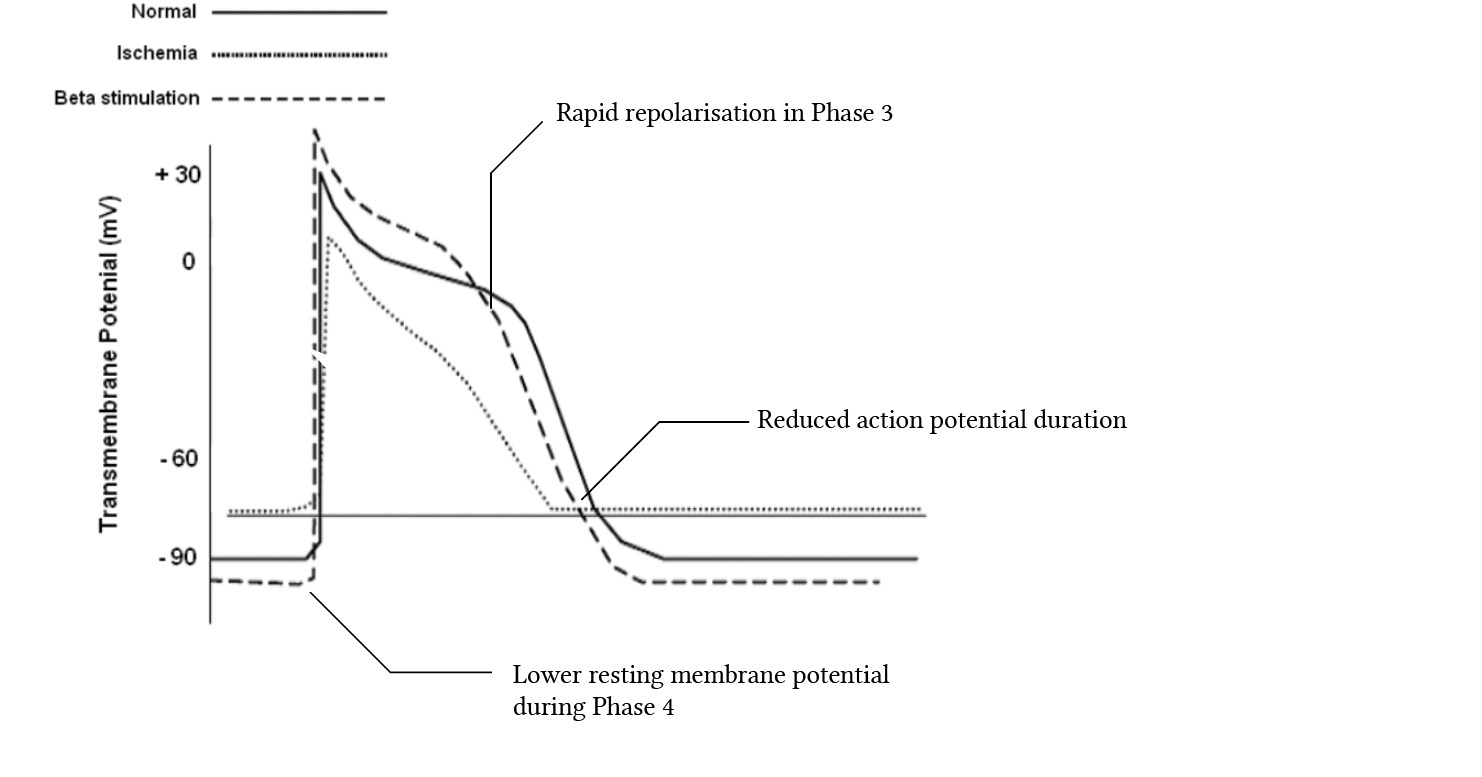 So, how does this affect arrhythmogenicity? In summary:

Amiodarone sotalol ibutilide and vernakalant are really the main contenders here, though worldwide there is an even larger selection of these agents available. This class prolongs repolarisation by interfering with the function of inward rectifier and outward delayed rectifier potassium currents, increasing the duration of the refractory period and of the action potential as a whole.

It is hard to discuss the Class III effects because the poster child for this class is amiodarone, and it acts promiscuously on all Class I-IV molecular targets. In fact, all Class III agents have some kind of extra weirdness (sotalol is a beta-blocker, ibutilide acts on slow inward depolarising sodium currents, etc). A "pure" potassium channel blocker effect is therefore difficult to describe using an example. Strictly speaking, they should only prolong repolarisation. The best resource to explain this would probably be the little fragment from Cardiac Electrophysiology: From Cell to Bedside (p. 518 of the 2017 edition). In short, these drugs mainly block Ikr, Iks and Ik1 currents which are responsible for Phase 3 of the cardiac action potential. Class III drugs are not unique in the effect, as there are many other drugs which interfere with this current (notably, macrolide antibiotics and antipsychotic drugs). One might say that some drugs prolong the QTc as an accidental side effect, but Class III agents do it intentionally. In the form of a diagram, one would express  this like so:

Verapamil and diltiazem are the only real representatives here, as these are non-selective agents, whereas the dihydropyridine subclass tends to only affect the calcium channels in the vascular smooth muscle. Walker & Chia (1989) offer a good summary of their antiarrhythmic effects. In brief, their main effects are on pacemaker tissue, and on Phase 2 of the cardiac action potential.

At risk of being seen to promote the apostate classification system by Lei et al (2018), one needs to tentatively recognise that there are other drugs out there (digoxin, magnesium, adenosine, etc) which do not fit neatly into the Vaughan Williams classification.

Johnson, E. A., and M. G. McKinnon. "The differential effect of quinidine and pyrilamine on the myocardial action potential at various rates of stimulation." Journal of Pharmacology and Experimental Therapeutics 120.4 (1957): 460-468.

Borchard, U., and M. Boisten. "Effect of flecainide on action potentials and alternating current-induced arrhythmias in mammalian myocardium." Journal of cardiovascular pharmacology 4.2 (1982): 205-212.

Bigger, J. Thomas, and William J. Mandel. "Effect of lidocaine on the electrophysiological properties of ventricular muscle and Purkinje fibers." The Journal of clinical investigation 49.1 (1970): 63-77.

Cheng, Tsung O., et al. "Effect of quinidine on the ventricular complex of the electrocardiogram with special reference to the duration of the QT interval." American heart journal 51.3 (1956): 417-444.