Classification of inotropes and vasopressors

This chapter is relevant to Section G8(i)  of the 2017 CICM Primary Syllabus, which asks the exam candidate to "Understand the detailed pharmacology of inotropes and vasopressors". Unsuprisingly, this ICU specialist training pathway dedicates a lot of assessment bandwidth to making sure the trainees are completely at home with the use of these substances. They are our most commonly used instruments, and some might say that the history of intensive care is really the history of vasopressors and inotropes.

Questions about inotropes and vasopressors from past Part One papers include the following:

As you can see, a couple of questions ask for a classification of these drugs. This is the main objective of this chapter. Unfortunately, there is no single widely-accepted classification system available, not in the same way that antiarrhythmics or antihypertensives might be classified. Moreover, it appears that every expert who is commisioned to write a review article on this subject had felt compelled to generate their own unique classification system.

What would CICM say? Examiner comments to Question 1 from the second paper of 2014 are an example of how to effectively demonstrate your contempt for the trainees through the careless laziness of your feedback. "The poorer answers suffered for want of a useful classification system", they said, and they said little else in their two-line "model answer". Logically, that is a fair statement, as this author also suffers for want of a useful classification system, there being none available anywhere.  Fortunately for trainees, an earlier group of college examiners very clearly outlined what they expected in their comments to Question 7 from the first paper of 2010. The classification system which follows is based on their detailed statement.

Let's try to reconstruct what they wanted when they said "this question required a classification based on chemical structure and class action". The question was about inotropes only, which actually makes it a little bit easier. From the way the college comments are structured, it appears they wanted a two-tiered system, with the first order occupied by pharmacological class.

Different approaches to classification of inotropes and vasopressors

There are lots of different ways to classify vasopressors and inotropes. The best one can do in this lawless chaos is arm the trainees with several different frameworks which they can reliably deploy depending on their circumstances.

Classifications based on organic chemistry

These are probably the least useful classification systems in medicine, because they usually tell you nothing about either the clinical effects, molecular mechanisms or even chemical properties of these drugs. There is literally no merit to this exercise, except that it generates headings to break up the columnar monotony of an unordered list. Observe:

Classification based on pharmacological drug class

Surely, we should expect more from our taxonomies. For example, you should at leas be able to have a guess as to what the drug will do, on the basis of how it is classified. On that basis, one could classify inotropes and vasopressors according to their pharmacological class:

It seems what the college wanted in Question 7 from the first paper of 2010 was this system, lightly rolled in the previous chemistry-based system. Yes, this is a bit more informative than just a purely chemical classification, but it just seems to include an unnecessary extra step. Pharmacological class is itself based on the molecular mechanisms of drug effect; surely we could just skip to that instead?

Classifications based on the molecular mechanism of action

This would be a system that organises the available substances according to the manner by which they activate the intracellular mechanisms which lead to muscle contraction. For a good example of what that might look like, have a look at this system proposed by Feldman (1993), who was clearly taking a page out of Vaughan Williams' book:

Unfortunately, the Feldman classification did not catch on, which is why you've never heard of anybody referring to levosimendan as a "Class III inotrope". Additionally, it does not incorporate vasopressors, and doesn't even include all inotropes (i.e. what about calcium chloride?)

Classifications based on ionised calcium

Looking closely at the mechanisms listed above, one comes to the conclusion that an increased interaction of calcium with contractile proteins is the end product of all inotrope function, and all vasopressor function for that matter. From this, it follows that inotropes and vasopressors could be classified in terms of how they affect calcium handling. Palmer & Pennefather (2009) presented this classification method; except they don't appear to be advancing this classification system as their own; rather, when it is presented, the presentation is nonchalant, as if it's always been like this. "Inotropes are classified according to their effects on intracellular Ca2+", they casually toss. Thus:

Even though they managed to find a spot for calcium salts, this is again imperfect. For example, levosimendan would end up in both of the latter two categories. Also, vasopressors are sorely neglected (whither angiotensin?). Lastly, these mechanism-based classification systems both have the same flaw - they are entirely divorced from clinical meaning, i.e. by looking at a drug's position within such a classification system, one really cannot determine how it works or what effect it might have on the patient.

Classifications based on clinical effect

A purely functional classification system has the advantage of telling you what the drug is expected to do, at a glance. And then you would be able to immediately determine what alternative drugs exist in the same functional class. Jentzer et al (2015) offer an example of such a system: 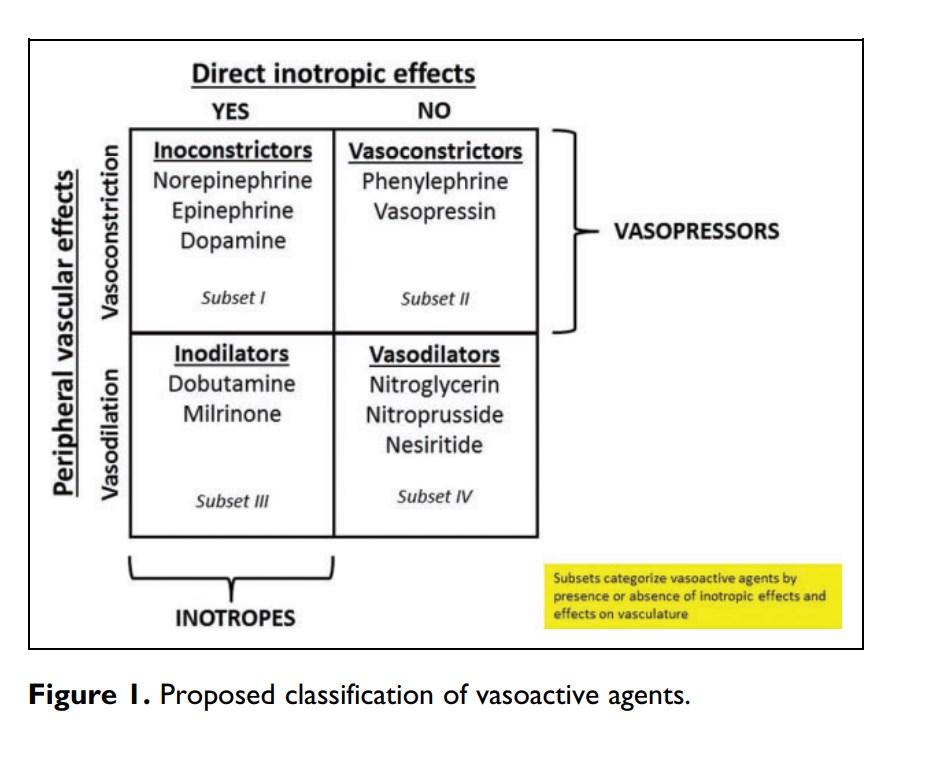 Not only does this readily expand to accommodate weird drugs with mixed effects, but it incorporates vasodilators with no inotropic effects, and is in the running for some sort of "periodic table of inotropes". Unfortunately, it cannot accommodate drugs with dose-dependent variations in activity (eg. dopamine), and for pathology-related effects (eg. where adrenaline acts as an inodilator in maximally vasoconstricted cardiogenic shock patients). Moreover, from looking at this classification, you would not be able to tell which agents will have a clearly synergistic effect, and which will interfere with each other by targeting the same receptor class. Also, there is no obvious place in this for agents which have a purely inotropic effect (eg. high dose insulin).

Characteristics of an ideal inotrope, according to Eliott (2006), are:

To this, you could probably add:

To arrange this into a structured exam answer which incorporates adrenaline without wasting time, one would have to use a table:

Jentzer, Jacob C., et al. "Pharmacotherapy update on the use of vasopressors and inotropes in the intensive care unit." Journal of cardiovascular pharmacology and therapeutics 20.3 (2015): 249-260.