This chapter is vaguely relevant to Section E(ii) of the 2017 CICM Primary Syllabus, which expect the exam candidate to "describe ... cellular organelles and their properties". Organelles individually have never appeared in the written or vivas, but on occasion some trainees have been asked to draw a  labelled diagram of a mitochondrion and to discuss its function. From the clinical relevance of this exercise, it follows that there is a non-zero chance that at some point in the future the CICM primary candidates may be called upon to draw a Golgi apparatus or some sort of reticulum. If this nightmarish scenario should ever materialise, the bulk of this chapter will finally become useful.

An excellent published resource for this topic is Tour of Organelles Through the Electron Microscope, a reprinting of a classic Harvey lecture by Keith R. Porter (Satir, 2005).  That's probably already more than you need to know for the CICM examination system, no matter how unrealistic and deranged it may become with the coming years. However, if "more than you need to know" is still not enough, you may wish to avail yourself of Cellular Organelles and the Extracellular Matrix by Edward and Neville Bittar (Volume 3 from the Principles of Medical Biology, 1996). In this book, each organelle gets its own chapter.

Charles Garnier is said to have first noticed the ER on light microscopy, but generally, the characterisation and the name "endoplasmic reticulum" were crafted by Porter et al. (1945). The investigators reported the presence of a "lace-like reticulum" which Keith Porter later (1953) described as "endoplasmic reticulum" because of his observation that "this component is absent from the thinner (ectoplasmic) margins of the cell and appears instead to occupy the central or endoplasmic portions of the cytoplasm". 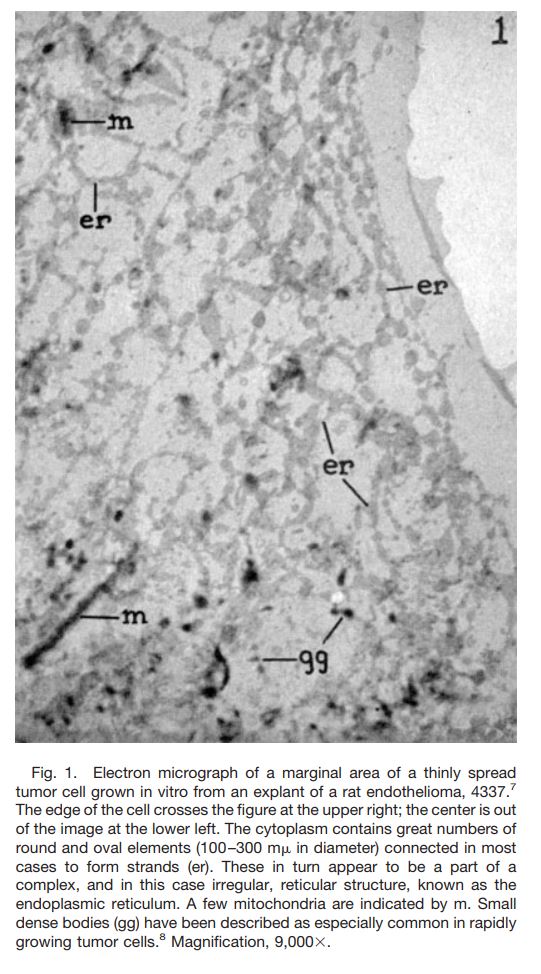 Porter himself, many years hence in his illustrious career confessed that these things got named in a fairly haphazard fashion by people like himself who had no idea of what they were looking at or what its function might be. The complexity of this three-dimensional structure also is not apparent from thinly sliced osmium-fixed slices. What appears as a "lace-like reticulum" in cross-section is in fact a 3D mesh of tubular structures and sheets.

An excellent rendering of this structure is offered by Bruce Blausen via Wikipedia. Unlike virtually every other image in the cellular physiology section, this one is licensed for use by any well-meaning author. The image gives an accurate impression of the endoplasmic reticulum network as a complex and large-scale network which extends to virtually all organelles in the cell. As you can see, it  is everywhere in the cell, wrapping around everything and contacting every organelle. It is like the circulatory system of the cell. 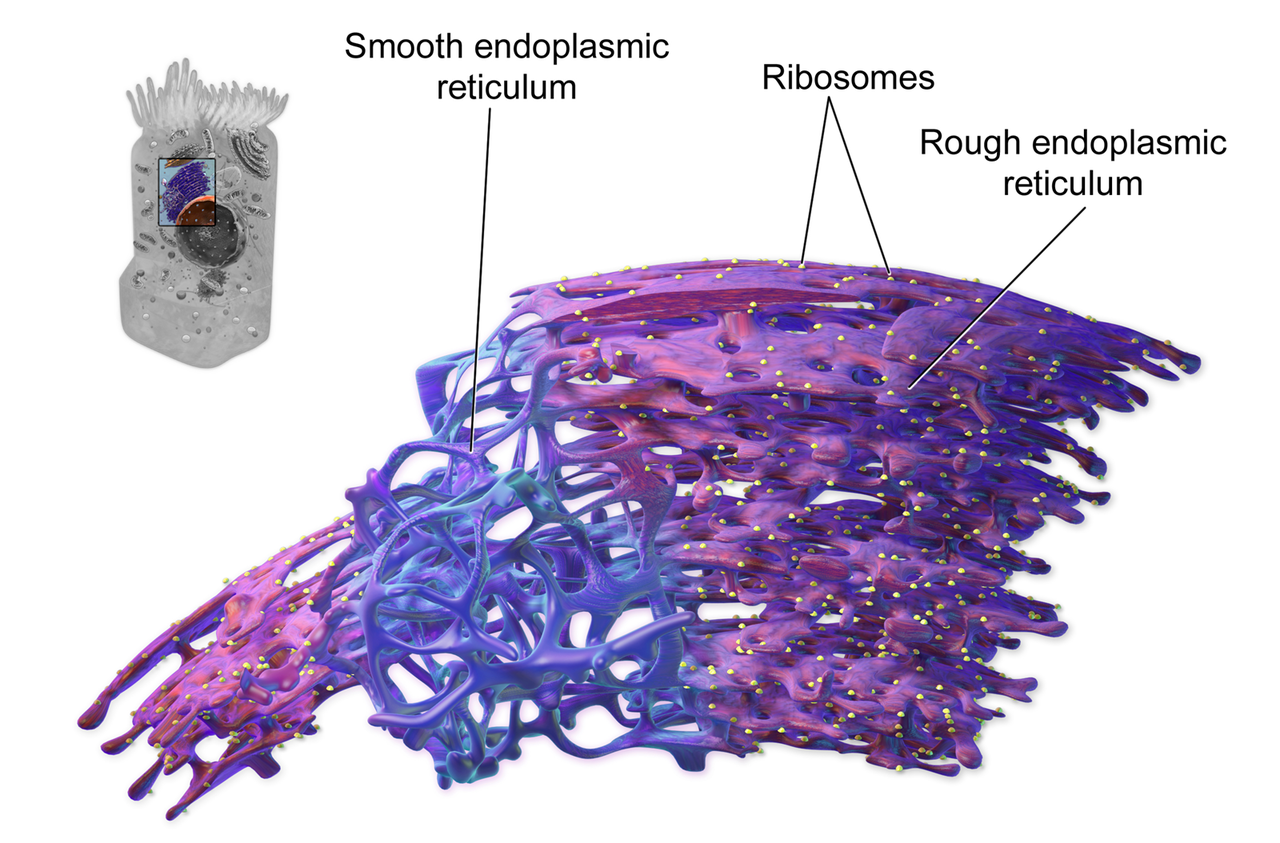 From the constant references to the ER as a tube or a network of tubes, one might conclude that there is an inside and an outside to it. In fact, the inside part of this complex network of tubes appears to form one continuous space. This was demonstrated with some elegant experiments. For example, by injecting Purkinje cells with a highly lipophilic dye which should really stay between the layers of a lipid bilayer, Terasaki et al (1994) were able to track its spread throughout the endoplasmic reticulum, demonstrating that all the membranes and cavities form one complicated and continuous network.

As far as its function goes, the endoplasmic reticulum can be summarised as "everything". According to an excellent review by Voeltz et al (2002), its functions include:

One generally hears about "rough" and "smooth" reticulum, which is a classification based on electron microscope appearance. Rough reticulum is said to appear rough because of the presence of multiple ribosomes. Functionally, cells which synthesize steroids or metabolize hydrophobic substances (eg. liver cells) are rich in smooth reticulum, whereas cells expected to fabricate large amounts of protein are rich in rough reticulum.

If you love the Golgi body enough to get it on a T-shirt, you'd probably also enjoy reading the Farquhar article (1981) about this structure, from whence this image comes from. 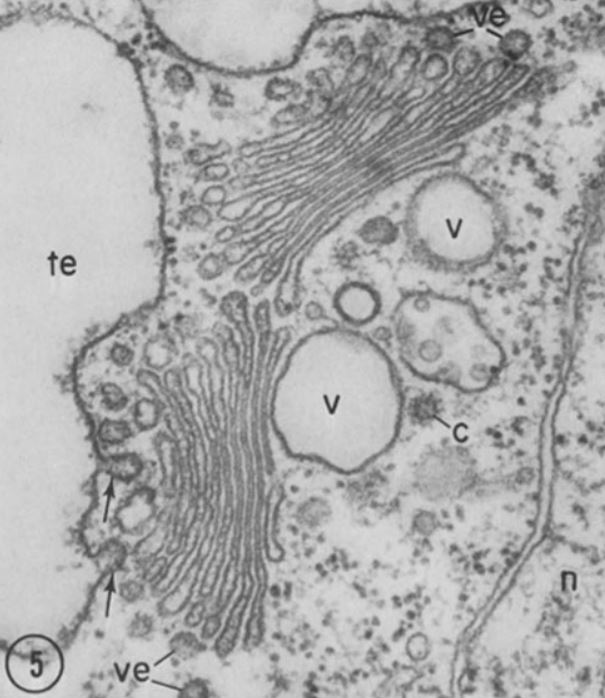 In the extremely unlikely case that anybody ever asks for an ICU trainee to discuss this thing, that will probably come in the form of a "describe the structure and function" question. At a basic level, the Golgi apparatus is a processing and distribution area for proteins and lipids. Structurally, there are discrete entry and exit points for the raw substrate and finished products, and there is a central processing/packaging area which does all the hard work. 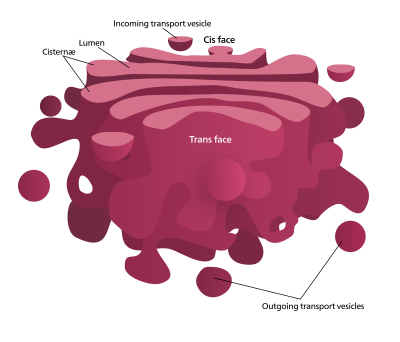 If one were ever in a situation where one were for some reason required to draw one of these things, essential structural components for one to label would include:

Structure of the cell nucleus

The nucleus is so central to the existence of the cell that often it is not included in the list of intracellular organelles, as if to separate it from the plebs. It is undoubtedly an important member of the intracellular contents, and worth discussing. For something formal,  Lamond & Earnshaw (1998) have an excellent article available through ResearchGate. In summary, the main function of the cell nucleus is to concentrate and maintain the genetic contents of the cell, which include the regulation of gene expression and replication. 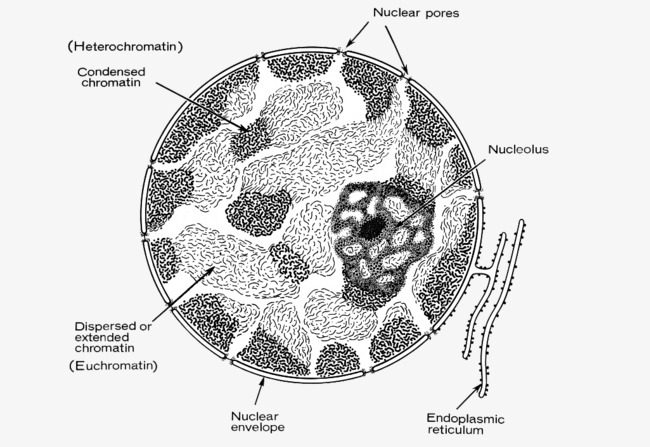 The image comes from an online clipart database, and it suits the purposes of this summary, though it has no reference and is attributed to an artist know only as "s m". An informative example from real life is below: this is the cell nucleus of a plasma cell from the bone marrow of a guinea pig, which has all the important elements on show. 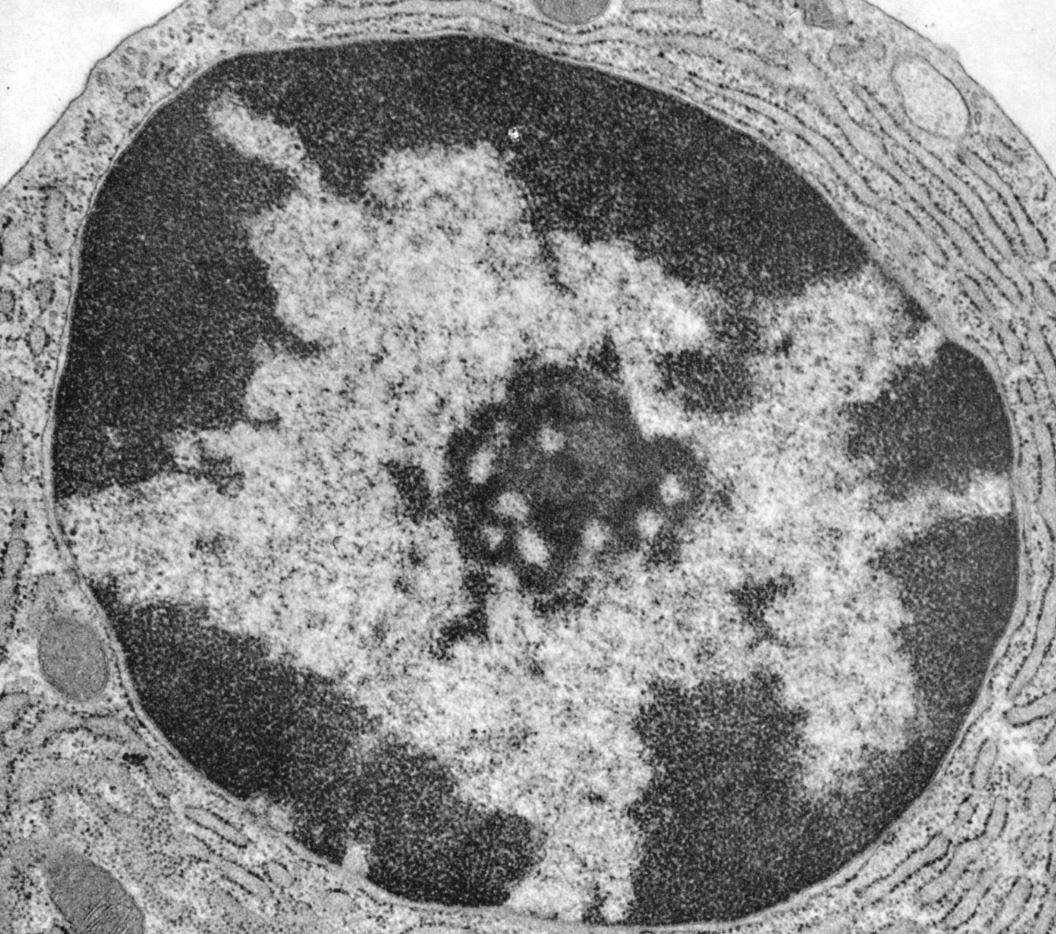 If one were ever called upon to draw a labelled diagram of this thing, it would be important to label it with the following components:

Another trivial-sounding factoid about the nucleus is its mechanical rigidity. Unlike the rest of the cell, which is a fairly squishy sack of gunk, the nucleus is approximately 5 to 10 times stiffer than the surrounding cytoskeleton and tends to be the most important determinant of whether or not a cell can fit through a gap of some sort (Lammerding, 2011). This might not sound like it means anything, but in fact it is probably one of the reasons that red blood cells do not have a nucleus - it allows them to deform effortlessly and squeeze through tight capillaries, which with a nucleus they might not be able to do quite so easily.

Structure of the  mitochondria

Most of the times, when one looks at this in a textbook, one is generally greeted with an image of a bean-shaped structure, usually brown in colour for some reason, and sectioned to reveal the characteristic cristae. These diagrams are usually approximated from electron microphotography by early authors such as Palade (1952), or Plummer & Bredl whose image can be seen below (misappropriated from Cellular Organelles by Bittar, David Drake Tyler's chapter). 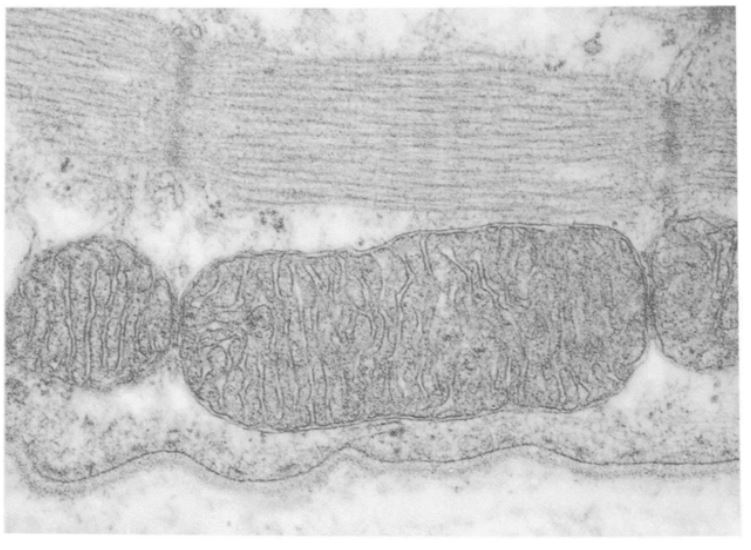 That is a mitochondrion from a tibial anterior muscle cell of a Great Dane, magnified  66,000 times. With this sort of image, it is possible to discern most of the main structural elements of the mitochondrion. To show these off, the temptation is great to offer a high-quality 3D rendered professional image of this organelle. However that is probably going to be unhelpful. In the previous CICM part 1 exams, trainees have been asked to draw this thing, which means they should probably have a lower artistic benchmark to aim for. Ideally, something relatively scrappy and hand-drawn. Fortunately, Tyler also gives us one of those: 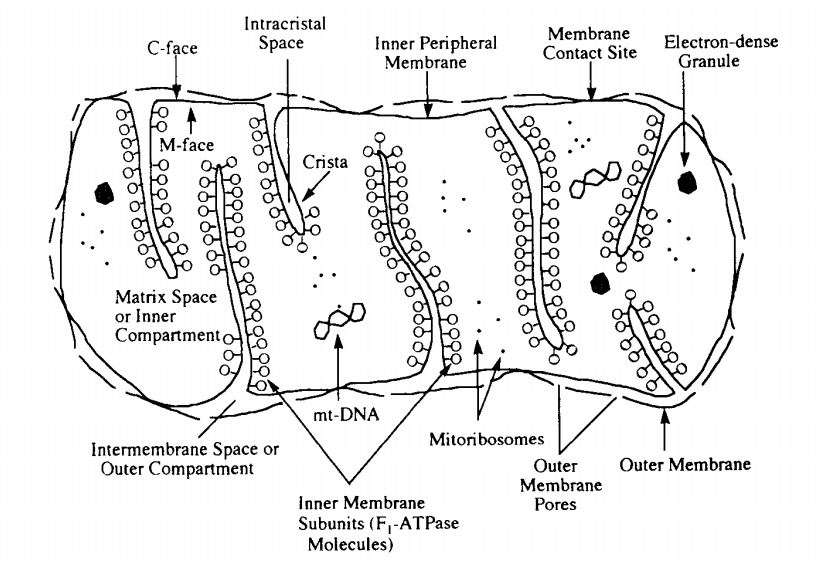 What minimum labelled structures would the college have wanted as a part of this diagram?  In Question 18 from the first paper of 2016, the only structural elements listed by the college examiners were "double membrane structure with cristae and enzymes lining the membrane and within the matrix". That's probably not enough.  If we were to use Tyler's chapter as the benchmark, you'd have to at least include the following:

The function of mitochondria being an entire massive topic all of its own, one might limit oneself to some abbreviated statements, such as:

As the name might imply, these small bodies are dedicated to the task of lysis.  If you need a detailed breakdown of this matter (pun totally intended) Luzio et al (2007) have you covered. In brief, lysosomes are a membrane-bound compartment in the cell, the last member of the endocytic pathway. Endocytosis, the process of engulfing things into the cell, produces pockets of material inside the cytosol which are bounded by the cell membrane, of which the lysosomes are one species.  Mukherjee et al (1997) is probably the most lucid explanation of what this is for and how it works. In brief:

Lysosomes are sufficiently morphologically diverse that offering an electron microscopy image of one would not be useful (not that it ever is), because their appearance differs significantly depending on their contents. One can compare them to the vacuoles of yeasts and protists, which have no lysosomes but where vacuoles fulfil the same role. In the same way that the contents of an amoebas vacuole reflects the random bunch of stuff it ate in the last half an hour, so does the lysosome contain the proteins and products of degradation which reflect the recent catabolic history of the cell.

Satir, Peter. "Tour of organelles through the electron microscope: A reprinting of Keith R. Porter's classic Harvey Lecture with a new introduction." The Anatomical Record Part A: Discoveries in Molecular, Cellular, and Evolutionary Biology: An Official Publication of the American Association of Anatomists 287.2 (2005): 1184-1204.