Composition and properties of cell membranes

This chapter is vaguely relevant to Section E(ii) of the 2017 CICM Primary Syllabus, which expect the exam candidate to "describe the cell membrane and [its] properties". Historically, this has not been very fertile soil for past paper questions. In Part 1 papers, only  Question 16 from the first paper of 2014 asked for specific details about the cellular membrane, and even there the examiners were mainly interested in the mechanisms of transport across cell membranes instead of the (fascinating) properties of the membrane itself. Elsewhere, the matter was touched upon even more briefly. In actual fact, it is rather difficult to say what exactly constitutes a minimum level of knowledge for this topic. The syllabus document is ever-uninformative, and the college answer to Question 16 is a single paragraph which merely remarks that the topic of membrane structure was "generally well covered by most candidates". Taking liberties suitable to an unimportant topic, the author has taken it upon himself to create a list of facts an ICU trainee might need to expectorate during the memory retrieval exercise that is the CICM primary.

In the event that further reading or references are required, the 2nd edition of The Cell contains a chapter on the "plasma membrane" which will satisfy the minimum college requirements, whatever they may be. The exact same answers are made slightly more available by Raicu & Popescu (2008), where well-referenced descriptions and explanations are offered, but their book chapter is paywalled by Springer, and towards its end degenerates into thick dense mathematics.  For historical detail, the original fluid mosaic model article by Singer et al (1972) is available for free, and probabl;y worth reading because this model is still in use (albeit with modificatioins). For a totally unreasonable excess of detail (eg. a discussion of the energy cost of stretching or bending the cell membrane) one may explore Rob Phillips' Membranes by the Numbers (2018).

Structure of the cell membrane

If one were ever asked to quickly list the structural components and characteristics of a cell membrane, one would probably need to rely on some sort of pre-memorised script, because most normal ICU trainees do not carry such information in their head. For this purpose, a script was created:

Interestingly, we've known that this thing is a lipid bilayer long before electron microscopy revealed this visually. This dates back to the 1930s.

Anyway. How thick is this membrane? That's quite difficult to establish precisely. The scale of this structure is so small that even modern TEM techniques are unequal to the task of producing anything better than grainy low-res images, making it difficult to measure this precisely.  Textbooks vary in their estimate of the exact phospholipid-to-phospholipid thickness, but most of them generate some numbers in the order of 5-10 nm:

The lower range of numbers (eg 4-5 nm) is  usually referring to membranes of procaryotes, quoting data from authors like Gan et al (2008) who reported on the "basic architecture of purified, frozen-hydrated sacculi" (the sacculus being the peptidoglycan polymer which is essentially one big bag-like molecule which wraps around a bacterial cell). Phillips (2018) has some excellent microphotographs with little calipers which illustrate the thickness of this structure. The Myxococcus  and Shewanella images above were stolen shamelessly from his paper. 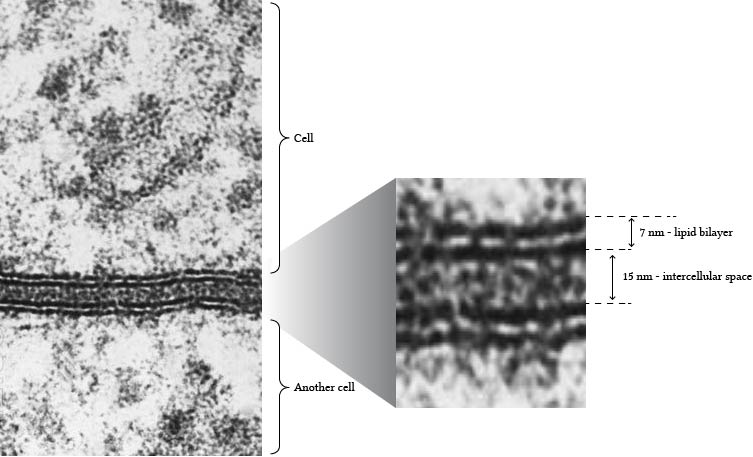 It is also possible to mathematically estimate the thickness of a lipid layer with some level of confidence.  Irving Langmuir (1917) put a known (Avogadro's) number of palmitic acid molecules in a body of water and then calculated the area covered by each molecule, concluding that "the molecules arrange themselves on the surface with their long dimension vertical" - something which has been subsequently confirmed by several other methods. In case you were wondering, the thickness of such a palmitic oil slick is 2.4 nanometres. For the typical eucaryotic phospholipid (eg. phosphatidylholines such as POPC and DLPC), the typical molecular length is about 2.1-2.7 nm, giving a bilayer thickness of around 4-6 nm.

The whole membrane, of course, ends up appearing thicker than this (hence the 7-10 nm estimates) because it is packed full of proteins and polysaccharides, such that the entire membrane probably resembles a "cobblestone pavement" (Takamori et al, 2006) with the lipid bilayer acting as a thin mortar between large thick clusters of transmembrane proteins. Again borrowing (stealing) shamelessly from Phillips (2018), the diagram below demonstrates the relative sizes of these transmembrane structures.

Of course, this beautiful CGI diagram does not represent what the ICU trainee is likely to produce in the exam, when the question asks them to "describe, with the aid of a diagram, the structure of the cell membrane". It would probably look something like this:

The minimal elements expected from such a diagram are difficult to reconstruct from college examiner comments to Question 16. All they said was that the structure "was generally well covered by most candidates". Working from nothing, one might conclude that the minimum probably consist of the following:

Chemical composition of the cell membrane

In a brief summary, the cell membrane is composed of three main types of components:

Lipid component of the cell membrane

Though there are literally hundreds of different types of lipid molecules in every cell (and every organelle has a slightly different mix), there are a few which are of key importance, their mass accounting for the majority of total membrane lipid:

More detail can be fund in Thomas Heimburg's article (2009); his table is reproduced below to illustrate the extreme variability in lipid composition between cell types and even within the same cell:

Cholesterol is also a major membrane component and is present in a fairly variable amount, depending on the cell and species. For example, human RBCs contain about 20% cholesterol by weight, while rat liver mitochondria contain only 3% (Heimburg, 2009). Of the different lipids in the cell membrane, some play a role which has some sort of special physiological significance, whereas others appear to be essentially filler and ballast. Of the special lipids, phosphatidylinositol is involved in second messenger systems, and phosphatidylserine is a signal molecule which is everted onto the external side of the membrane when a cell is undergoing apoptosis, signalling to macrophages that it needs to be demolished. Additionally, the negative charge of the inner lipid heads gives the inner side of the membrane a net negative charge, which helps maintain the transmembrane charge gradient.

Protein component of the cell membrane

The cell membrane is full of proteins (50% of it by mass is proteins). The function and activity of these things is much more interesting than their structural properties. If one had to say something about them, one would classify them thus:

Generally these proteins do not sit inertly in the lipid bilayer. They are able to diffuse laterally (unless firmly anchored to some piece of cytoskeleton) and they can rotate randomly.

Polysaccharide component of the cell membrane

There are carbohydrate components in the cell membrane, which are generally somehow integrated into the lipid or protein components of the membrane, i.e. as glycolipids or glycoproteins. Generally speaking, the glycosylated bits of proteins and lipids are sticking out into the extracellular surface of the membrane, forming a carbohydrate layer on the outer surface of the cell. This is the cellular glycocalyx. Depending on the cell type, this carbohydrate coat may have minor structural importance, or it may have profound organism-level significance like the endothelial glycocalyx, depicted below in an electron microphotograph which is difficult to attribute (it comes from here but I am sure they are not the original owners)

Cells for which the glycocalyx plays a major structural or functional role are numerous. In general, if the cell is designed to be coated in some sort of mucus, chances are it's got a fairly thick glycocalyx (as mucus is generally a polysaccharide product). Examples (from Tarbell & Cancel, 2016) include:

Obviously, not all cells are overgrown with a thick coat of polysaccharides as depicted above. Some cells may have only a minimal glycocalyx in terms of cell membrane mass, which nonetheless has substantial importance. For example, the ABO blood grouping system is based on the recognition of polysaccharide surface antigens jutting out of the membranes of red cells.

Water in the cell membrane

The cell membrane has a surprising amount of water in it, for something that is supposed to be a mainly lipid-based cellular object. Water is in fact an active structural component of the cell membrane. The water is present in two main forms:

So, the membrane is not exactly a rectangular slab of butter as often presented by scientific illustrations. Disalvo et al (2015) discuss this aspect in great detail. In short, it is probably important to remember that there is plenty of water in the membrane, and that it does useful things. When one takes a sample of purified membrane phospholipid and allows it to form spontaneous liposomes in solution, they will swell and shrink according to the osmotic changes in that solution, demonstrating that water goes in and out of them (Van Zoelen et al, 1978). The lipid bilayer molecules do not fit neatly together but rather are piled somewhat haphazardly, with gaps between them formed by the "kinks" in their hydrophobic tails. Gaps, therefore, appear in the lipid bilayer internal structure, vacancies which readily admit molecules of water and perhaps even a stray ion or two. The water which courses through these channels would certainly not be a normal bulk water flow, but likely some sort of highly organised water, with substantially different solvent properties. Its presence permits lipid-water-protein interactions which strengthen the lipid-protein associations where the protein is hydrophobic. Conversely, the presence of whole nanometer-scale pools of water inside the membrane permits the insertion of polar protein molecules into the non-polar bilayer.

Ions associated with the cell membrane

The cell membrane is a charged object suspended in a soup of dissolved ions, and therefore it is unsurprising that it might interact somehow with the ionic constituents of extracellular and intracellular fluid. Much of these interactions are due to the intrinsic surface charge of the membrane components:

This leads to an intrinsic net negative charge on the cell membrane surface. This repels anions such as chloride and attracts cations such as sodium and potassium, acting as a powerful inhibitor of their migration.

This phenomenon in a living membrane is highly complex and variable: the surfaces of the membrane are heterogeneous, and there are islands of variable charge (some of it positive, some negative) which migrate around the lipid bilayer. On top of that,. the presence of membrane proteins and polysaccharides (all of them with their own dissociation properties and ion adsorption capacities) make it difficult to behold the cell membrane as some sort of uniform capacitor with ions neatly arrayed along either side.

Fortunately, we are able to create phosphatidylcholine liposomes in the lab which are more uniform and better behaved. Under these conditions, it is possible to demonstrate that monovalent and divalent cations are adsorbed onto the membrane surface, and that these ions then change the membrane surface charge density and ion permeability (Kotyńska et al, 2009). This adsorption depends on several factors, of which the most important is probably the pH of the extracellular fluid: changes in pH alter the surface charge of the membrane with the membrane becoming more positive at lower pH and more negative at higher pH. Interestingly, the pH range at which there are real differences are quite beyond the range of survivability; at a clinically relevant pH range (pH 6.5-7.5) the surface charge density is relatively stable.

Anyway. The upshot of ion adsorption on the membrane surface is of twofold significance:

Langmuir, Irving. "The constitution and fundamental properties of solids and liquids. II. Liquids." Journal of the American chemical society 39.9 (1917): 1848-1906.

Dobrzyńska, Izabela. "Association equilibria of divalent ions on the surface of liposomes formed from phosphatidylcholine." The European Physical Journal E 42.1 (2019): 3.