The most thorough and definitive resource for this topic would have to be Nicholas Sperelakis' Cell Physiology Source Book, where Chapter 15 (p.243 of the 3rd edition) discusses the Gibbs-Donnan equilibrium in miniscule detail. That's probably also a good reference for a discussion of why the Gibbs-Donnan effect is not the main mechanism responsible for the resting membrane potential. Guyton & Hall mentions the Donnan effect in relation to capillary fluid shifts around page 196 of the 13th edition, and the treatment of this phenomenon there is most unsatisfying. Ganong's Review of Medical Physiology does a slightly better job (p.6 of the 23rd edition), three or so paragraphs which is probably good enough for government work. If one is temperamentally unsuited to piracy, one can pay for these textbooks and find these references inside them. Alternatively, Nguyen & Kurtz (2006) have a free article online which discusses the concept in great detail, with overmuch algebra and a focus on the Gibbs-Donnan equilibrium between interstitial and intravascular fluid.

Definition and history of the Gibbs-Donnan (or just Donnan) Effect

One might expect it to be best defined by Frederick George Donnan himself (eg. in a posthumous reprint of his 1911 paper) but unfortunately Donnan himself had never been familiar with the needs of CICM primary candidates and therefore made no effort to abbreviate his principle into a memorable soundbite. Instead, the paper is an excellent, well written long-form explanation of the effect, probably better than anything subsequently published in glossy colour textbooks.  If one needs a short definition, one can be reconstructed from the first paragraph of the entry from the Encyclopedia of Membranes (Drioli & Giorno, 2015):

Is it the Donnan effect, or is it the Gibbs-Donnan effect? Donnan never called his effect "the Donnan effect", but from 1911 onward it became known as such, and at this stage there was zero Gibbs in the public mentions of this concept. J.W Gibbs was predominantly a physicist and mathematician who contributed (massively) to chemistry some decades before Donnan came along. The relationship between the Donnan effect and the published works by Gibbs was unearthed in 1923 by G.S Adair, who found a Gibbsian equation from 1906 which was essentially identical to Donnan's equation. There is little doubt that Donnan was significantly influenced by Gibbs, to the extent of giving addresses in his honour and describing him as "a man of genius, combining profound insight with the highest powers of logical reasoning" (Donnan, 1925). Subsequent publications by Donnan (eg. Donnan, 1924) are well-furnished with appropriate attributions, i.e Gibbs' equation is acknowledged at the very beginning. Donnan even went on to publish what appears to be a two-volume hagiography of Gibbs' scientific works. So, whose effect is it? "Gibbs-Donnan" seems to be the most politically correct approach where the chronologically earlier author is given primacy, but many writers omit Gibbs even now. This is a state of affairs which Josiah Willard Gibbs would probably have been quite at peace with, considering that he possessed a character rather devoid of flamboyant ambition, and was "not an advertiser for personal renown".

Explanation of the Gibbs-Donnan effect

Because of some inherent lassitude on the part of the author, what follows is essentially a recapitulation of the original description Donnan gave for his own effect in 1911, but with potassium substituted for sodium. This simplified two-compartment experiment remains an effective means of explaining the concept; to add cellular realism to this description would sacrifice clarity to accuracy. 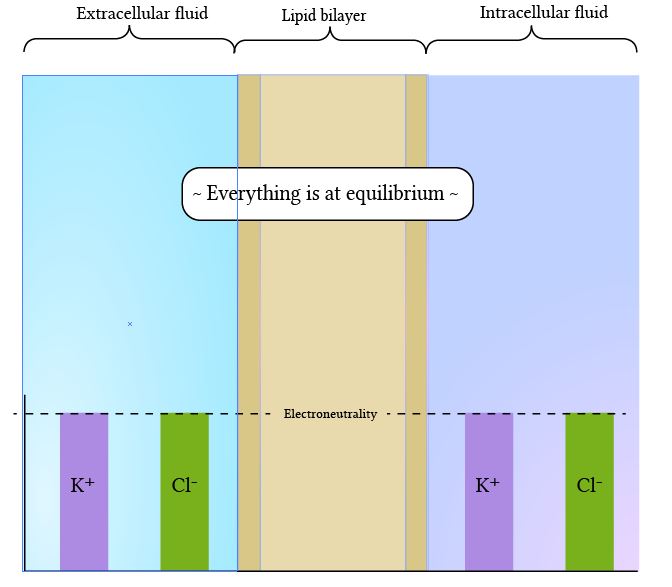 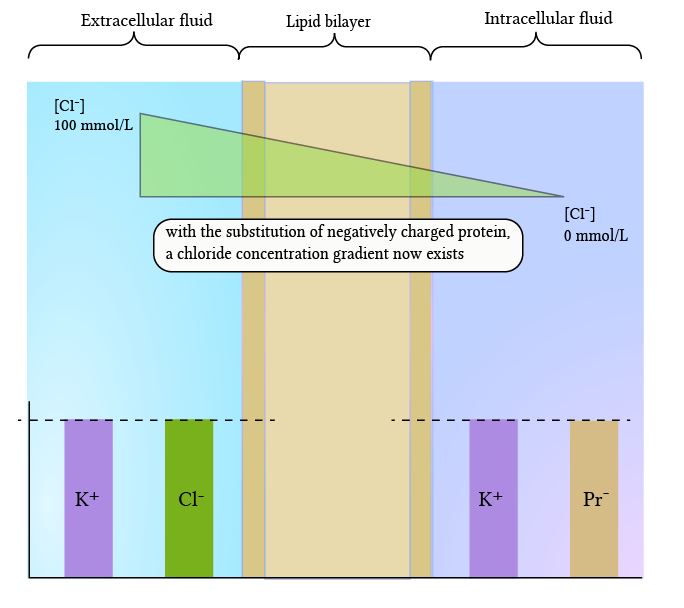 So, because the membrane is permeable to chloride ions and now there's a concentration gradient, some of the chloride ions diffuse into the intracellular compartment. By necessity, they are accompanied by some potassium ions, so that electroneutrality is preserved. 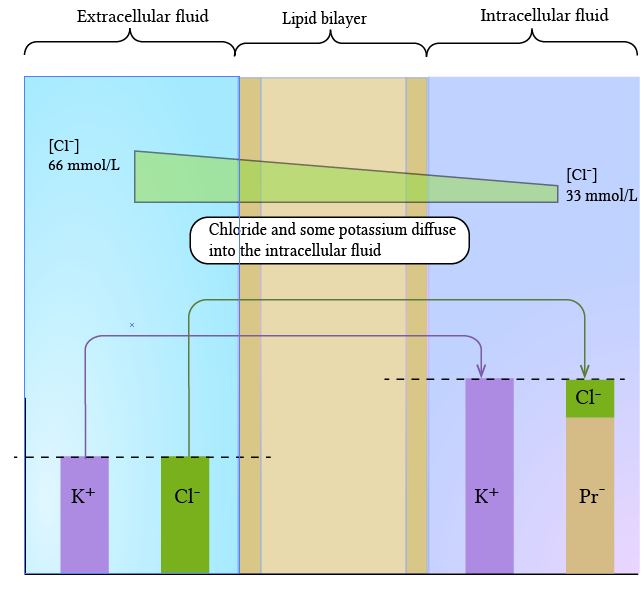 The chloride ions are also repelled by the negatively charged protein in the intracellular compartment, and so the bulk of the chloride remains on the extracellular side of the membrane. 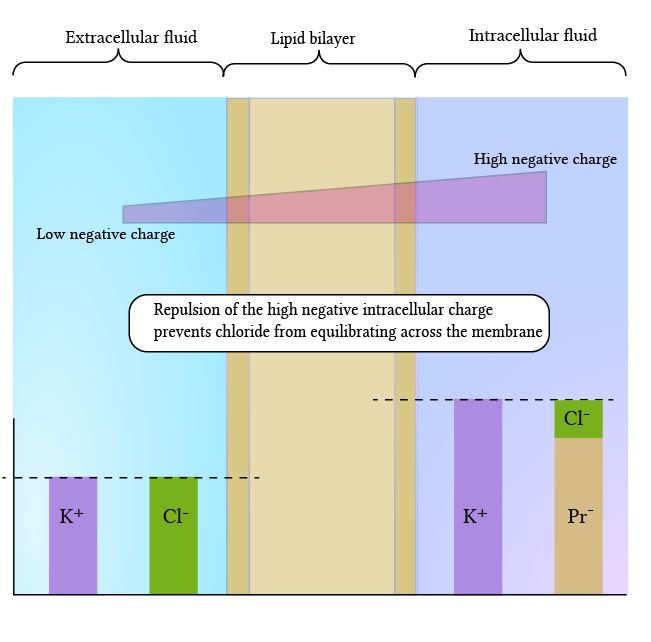 Without falling into a rabbit hole of quadratic equations, it will suffice to say that if we started with concentrations of 100 mmol/L  on either side, once protein is added we end up with about 33 mmol/L of chloride on the intracellular side, as well as 133 mmol/L of potassium; the extra ion molecules came from the extracellular fluid, and therefore that compartment becomes relatively ion-poor, with about 66.6 mmol/L of each species. 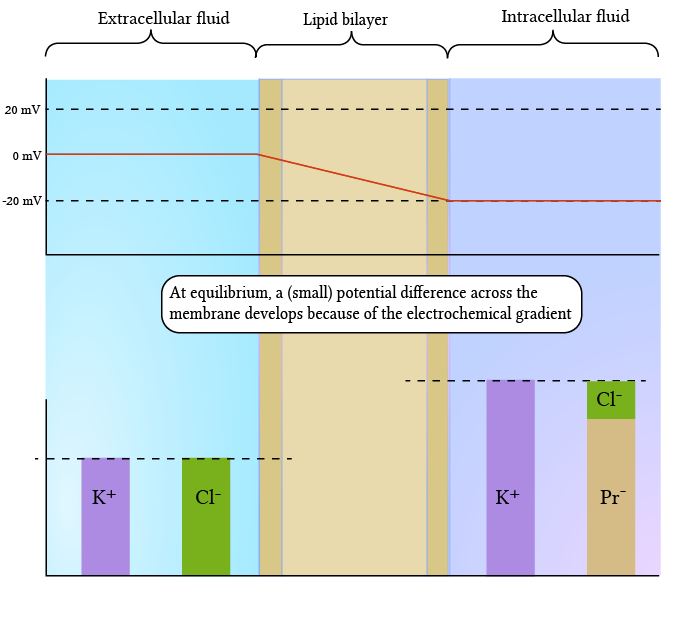 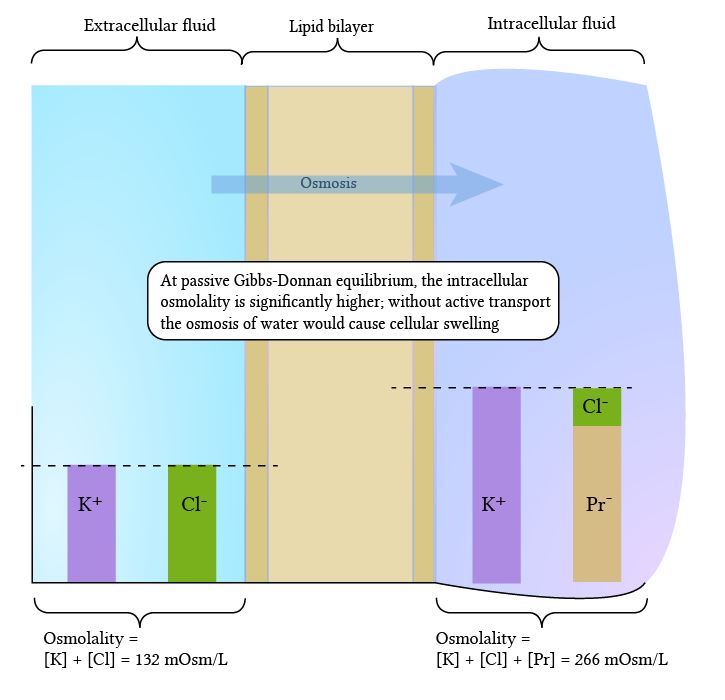 In fact, in this (wildly physiologically inaccurate) thought experiment, the difference in osmolality is quite stark (there's about 134 mOsm/L difference). With this sort of osmotic gradient, water would surge across the membrane, causing the cell to swell hideously and explode.

Obviously, that does not happen in vivo. The Na+/K+ ATPase plays a major role in preventing cellular osmoexplosion by pumping three sodium ions out of the cell in exchange for two potassiums. The terrible sodium permeability of the cell membrane means that the sodium generally keeps to the extracellular compartment, maintaining the osmolality there. As a result, a second Donnan effect (this time with the non-diffusible ions being extracellular sodium) is established across the membrane, which maintains an osmotic counter-gradient for water movement. Thus, there is a "double Donnan effect" in action at every cell membrane. For exam purposes, the CICM trainee would be advised to avoid terms like "osmoexplosion"; the formal statement would be that "ATP-powered sodium pumps decrease intracellular osmolality by actively transporting sodium out of the intracellular fluid, thereby maintaining cell volume homeostasis via a second Donnan effect".

The importance of Na+/K+ ATPase in maintaining a stable cell volume was well established by a series of early authors who disabled the pump using various methods and then observed as the cells swelled and ruptured. For example, Russo et al (1977) used hypothermia to halt all cellular metabolic activity and thereby abolish ion pumping. The rat liver slices were incubated at 1ºC for 90 minutes and then examined under an electron microscope, comparing them to normothermic controls. With ion pumps disabled, the cells increased in size markedly. Their water content increased by about 60%, and their sodium content more than quadrupled.

And at this point, reader, it appears convenient for us to briefly stop and sing an ode to Na+/K+ ATPase, mainly because we have just finished discussing its importance. It also happens to have become a 25% part of Question 2 from the first paper of 2022.

Structure and function of the Na+/K+ ATPase pump

How this subject matter makes a good intensivist, who could say. But it is hard to argue against knowing a little bit about this protein, as it certainly seems rather central to all cellular life.

For a lot more detail, the interested reader is referred to Clausen et al (2017)

Gibbs-Donnan effects beyond the cellular scale

Apart from influencing the confusing ATP-pump-infested environment of the cell, the Gibbs-Donnan effect also influences other macroscopic environments, and through a detailed discussion of these matters falls outside the remit of this chapter, it would be amiss to completely ignore these applications of the concept. In short, wherever a membrane separates compartments and isolates a non-diffusible substance within one of them, we can find some application of the Gibbs-Donnan effect.

In Australia, Kerry Brandis' The Physiology Viva is usually the first detailed introduction to this concept one encounters after leaving med school, and the example discussed below has been elaborated from his excellent notes on the subject. If one requires something more substantial from the published literature and is unwilling to pay for Brandis' book, Nguyen & Kurtz (2006) have produced an excellent review of the subject, bristling with a dense thicket of mathematical derivations. To maintain some vestiges of exam focus, these have been omitted from the discussion below.

In short, again we are presented with two compartments, this time interstitial and intravascular. Let us fill these with physiologically plausible concentrations of electrolytes.

All the ions are staying put. There are no forces shifting them around. Now lets add some anionic protein, as before.

Now, there is an electrostatic force repelling chloride out of the intravascular compartment. Consequently, more chloride collects in the interstitial fluid. The same force is attracting sodium back into the intravascular compartment. This competes with the concentration gradient. In order to render the concept easier to understand, the author has resorted to kindergarten-level graphic design, representing the electrochemical gradients with coloured slopes. One can almost imagine little ions sliding down them.

The attractive force of anionic protein for sodium competes with the concentration gradient sucking it back into the interstitial compartment. At a certain concentration, some sort of equilibrium is reached.

Water is osmotically attracted into the vascular compartment. The movement of water would then dilute the concentration of the ions, and there would be a change in their concentration gradients. So there is no stable steady state.

There is movement of some ions out of the intravascular space, but at Gibbs-Donnan equilibrium there are still more particles in the vascular compartment, exerting an oncotic pressure.

Donnan, Frederick George. "Theory of membrane equilibria and membrane potentials in the presence of non-dialysing electrolytes. A contribution to physical-chemical physiology." Journal of Membrane Science 100.1 (1995): 45-55.

Russo, M. A., G. D. V. Van Rossum, and T. Galeotti. "Observations on the regulation of cell volume and metabolic controlin vitro; changes in the composition and ultrastructure of liver slices under conditions of varying metabolic and transporting activity." The Journal of membrane biology 31.1 (1977): 267-299.

Clausen, Michael V., Florian Hilbers, and Hanne Poulsen. "The structure and function of the Na, K-ATPase isoforms in health and disease." Frontiers in physiology 8 (2017): 371.