Control of intracellular volume and composition

This chapter is vaguely relevant to Section E(i) of the 2017 CICM Primary Syllabus, which expect the exam candidate to "to describe the composition and control of intracellular fluid and the mechanisms by which cells maintain their homeostasis and integrity". This broad statement clearly reaches across the territories bounded by syllabus subheadings, and could just as easily belong in Section I (Body fluids and electrolytes), for example where the mechanisms that maintain intracellular volume are discussed. The chapters on the maintenance of the resting membrane potential and (more so) the chapter on Gibbs-Donnan equilibrium both feed into this topic area and some effort was expended on making sure that the relevant concepts are briefly revisited here.

Challenges to intracellular volume and fluid composition include:

The main regulatory methods available to the cell for adjusting its own intracellular ion concentration and osmolality are:

In response to extracellular hypertonia:

In response to extracellular hypotonia:

The topic of cellular homeostasis has never really appeared in any of the SAQs. The viva information supplied by the college is extremely sparse, but what we can make of it suggests that there has never been a viva on this topic either.  The ANZCA exams, from where a depressingly large number of CICM SAQs seem to come from, also appears to be devoid of such questions.  However, it is certainly something which could come up very easily. The topic is broad, which would force the exam candidate to think across several domains of knowledge.  They would need to synthesise some knowledge about selective membrane permeability, the osmotic implications of the Gibbs-Donnan effect, the action of the active transport pumps in counteracting this, and the influence of idiogenic osmoles on the intracellular osmolality. This could make a vicious SAQ or viva station. In short, one ought to have some sort of defensive structure in the event this ever comes up.

A good review article by Kevin Strange (2004) covers the regulation of cell volume very well, to the point where this free resource could easily satisfy the needs of a trainee who is unwilling to pay for textbooks. An alternative is the 2007 article by Florian Lang, which presents virtually the same material with a slightly different structure, and which touches on some of the extracellular regulatory mechanisms (eg. the impact of metabolism and hormones). Lang's earlier article from 1998 is even more detailed and was the main resource for this summary chapter.

Maintenance of cell volume and composition at rest

Let us consider a scenario where a cell is just sitting there in a warm pool of nicely isotonic fluid. Even under these circumstances, the situation is far from calm, insofar as the Gibbs-Donnan equilibrium is far from equilibrium. Without restating the main content of that chapter, it will suffice to say that:

One can see how this is untenable. The Gibbs-Donnan effect, left to its own devices, would produce an osmotic influx of water throughout the cell membrane, and the cell would swell hideously to the point where its membrane loses integrity.   Thus, the Gibbs-Donnan effect only operates successfully in the presence of Na+/K+ ATPase, which dutifully removes excess sodium cations from the intracellular space, maintaining a low intracellular sodium concentration and therefore a relatively isotonic intracellular environment.

As seen from the above, the maintenance of cell volume is a constant source of resting energy expenditure for the cell. The leakier the membrane, the more energy is required to keep sodium out (as it continues to leak back in).

Let's say you have either disabled the Na+/K+ ATPase, or so crippled the cell that it is incapable of powering this ATP-hungry bilge pump. What happens?

Well. The diagram below was stolen from Rex Jamison's 1974 pape, as it is sufficiently simplified and cartoonish to be easily reproduced as a hurried sketch by an exam candidate. 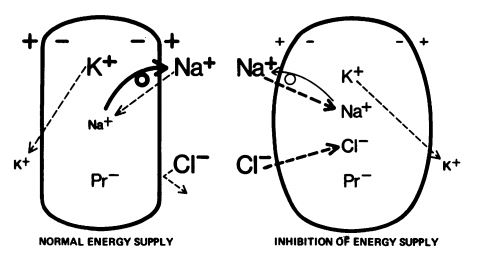 In short, the cells, when confronted with a loss of high energy phosphates, cannot maintain sodium efflux. The influx of sodium remains the same, or it may even increase because the intracellular fluid pH tends to drop in ischaemia and there is this annoying Na+/H+ exchanger which allows more sodium into the cell (inhibiting this protein appears to protect myocytes from ischaemia). As the cell membrane depolarises due to loss of electrochemical gradient, voltage-gated sodium channels also open.

The net effect of all these mechanisms is the unopposed entry of sodium into the ischaemic cell. Van Echteld et al (1991) cleverly used a sodium isotope (23Na) to determine how much sodium gets in there, and how soon. The isolated rat hearts had a baseline intracellular sodium level of around 10 mmol/L, and it increased to around 25 mmol/L after 30 minutes of ischaemia. This results in an uncontrolled increase of cell volume driven by the osmotic movement of water into the cell.

Sodium disturbances are not included in this list, as the cell membrane permeability fo sodium is poor. Changes in extracellular sodium are more interesting in terms of the osmotic effects they produce, i.e. by influencing the tonicity of body fluids, sodium changes can cause cell shrinkage or cell swelling. The responses to such "anisotonic" body fluids are discussed next.

If the extracellular fluid osmolarity was to increase, the net movement of water would be out of the cells, and this would result in cell shrinkage. The acute regulatory mechanism which response to these sorts of events can be summarised as "absorb more KCl and therefore water". That is basically the net outcome of the following steps:

The net effect of this is some early short-term volume gain. However, if extracellular osmolality remains raised (eg. you are gradually dehydrating from hyperglycaemia and becoming increasingly hypernatremic), the cell needs to take more durable steps to protect itself from osmotic shrinkage. The main objective is to equalise the intracellular osmolality so that intracellular and extracellular solute concentrations are relatively equal, or at least within some acceptable range. The long term plan involves the generation of idiogenic osmoles, molecules of impermeant solute which stay in the cell. These are discussed in some detail below.

Now, let's say the extracellular environment is losing its tonicity.  Let's say this happens acutely, as for example in the context of a dialysis session where suddenly the serum urea drops from 80mmol/L to 10mmol/L.  In the absence of regulatory mechanisms, the cell would swell because osmotically active intracellular content exerts a potent osmotic force on extracellular water. Kinne et al (1993) present a somewhat extreme scenario, where rat renal medulla cells were incubated in a 600mOsm/L solution for a while before being dumped into a relatively hypotonic 300 mOsm/L pool. 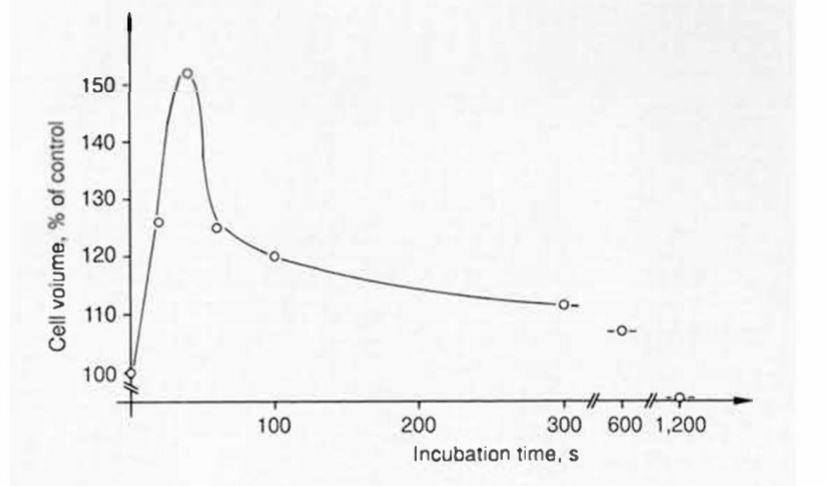 As you can see, within a minute or so, the cells swelled to approximately 150% of their size. However, this is rapidly corrected by cellular regulatory mechanisms.

In addition to these manipulations of ions, the rapid efflux of idiogenic osmoles tends to occur. Those solutes are slow to synthesise, but releasing them is a rapid process. This is probably responsible for quite a lot of the rapid drop in cell volume as seen in Kinne's graph. The change of membrane permeability to sorbitol (one of the idiogenic osmoles) is particularly quick - within 60 seconds of hypotonic exposure, the membrane becomes 45 times more permeable to sorbitol.

By naming one of these organic intracellular solutes, one is committed to discussing them in greater detail.

The first time any Australian critical care trainee encounters this term is usually in Kerry Brandis' Physiology Viva handbook for the ANZCA Part I examination. The term is often seen in the literature, where terms like "idiogenic osmoles" an "organic osmolytes" are used fairly interchangeably.

What are these molecules?

These molecules are a heterogeneous bunch, consisting of polyalcohols, amino acids and methylamines. They are either generated de novo in the cell, or absorbed from extracellular sources, or their intracellular concentration increases gradually because degradation mechanisms have been disabled.

How long does it take to generate idiogenic osmoles? A while, is all one could confidently say. We have some experimental evidence to suggest that the necessary interval is measured in days rather than hours. For instance, Lien et al (1990) tortured some rats with hypertonic saline, and dissected the brains to determine their osmoregulatory response. After two hours of being exposed to a serum sodium of 194 mmol/L, there were no acute changes in intracellular organic osmole concentration. However, after 7days, all of the abovementioned osmoles increased in concentration, such that the authors estimated they contributed at least 35% to the total change in intracellular osmolality. When the rats were allowed to manage their own sodium (i.e. the water dish was once again made available to them), the intracellular osmoles returned to their original concentrations over the course of 2 days.