This chapter is related to Section U1(ii) from the 2017 CICM Primary Syllabus, which asks the exam candidate to  "describe the physiology of insulin, glucagon and somatostatin". It has never really appeared in the CICM exams directly, which makes it somewhat pointless to discuss it in too much detail, but as a part of a syllabus item it could never be overlooked by somebody so given to the pursuit of completeness. Thus:

The best peer-reviewed references for this topic would have to be the excellent articles by Taborsky (2010) and Gerich (1981), both titled "Physiology of glucagon". The Endotext entry by Rix et al (2019) is also brilliant. Each of these recommendations gives glucagon exactly the treatment it requires for the CICM First Part Exam, i.e a concise clinically relevant explanation without frivolous digressions into molecular biochemistry.

Production and storage of glucagon

Like a lot of peptide hormones and almost exactly like insulin, end-product glucagon is a fragment of a much larger molecule that gets stored in granules after manufacture. It is produced as a prepropeptide, which gets to 20-amino-acid signal residue removed to make proglucagon. What happens afterwards depends on which tissue is doing the slicing. In the α-cells, proglucagon is cleaved to give glucagon, a 29-amino-acid peptide, and like with insulin the rest of the molecule ends up as a large biologically irrelevant proglucagon fragment, which is not special enough to have its own name (unlike C-peptide). However, if only this useless remnant was not nerfed by the addition of a few amino acids, it would actually be GLP-1 and GLP-2 (Glucagon-Like Peptides), which have all sorts of regulatory roles. That is exactly what happens in other tissues. If the proglucagon is made in the cells of the small intestine, they will leave the extra amino acids attached to the glucagon molecule (which then becomes the useless remnant), and secrete the active forms of GLP-1 and GLP-2 instead.

Those are only a couple of examples, and in fact there are a whole range of possible proglucagon-derived peptides listed in this paper by Drucker (2005). The only possible reason to mention these molecules here is their developing importance in the unexpected ven-diagram overlap of  chronic diabetes management and social media. Semaglutide and dulaglutide, the injectable GLP-1 receptor agonists, and the dual GIP/GLP-2 receptor agonist tirzepatide, have developed into a cause célèbre mainly by virtue of producing a reliable weight loss of about 10kg. It may not be long before these substances are encountered by the intensivist, either among the list of a patient's regular medications, or their own.

Glucose sensing by α-cells and release of glucagon

Pancreatic α-cells probably monitor blood glucose using the affinity of their intracellular glucokinase as the homeostatic setpoint, which is basically the same mechanism as β-cells.  This assertion should not be accepted as a statement that the seas of glucagon research are calm. Even as recently as 2014, Gylfe & Gilon were speculating that "it seems plausible that the different types of islet cells may share features of glucose recognition", i.e. it was not clear how this mechanism worked at all and people were making assumptions on the basis of fairly tenuous observations. For example, it was noted that the rate of glucose entry into α-cells was about five times higher than the rate at which those cells metabolised it, which suggests that they must be doing something suspicious with it (like using it to regulate glucagon exocytosis).  Only in 2020 Moede et al were able to demonstrate that knocking out glucokinase tends to dysregulate glucagon release, uncoupling it from the glucose level.

Whatever the mechanism, exocytosis of glucagon is maximally inhibited at BSL values of around 7-8 mmol/L. Like the effects of glucose on insulin secretion, for glucagon hypoglycaemiais only one of the regulatory influences, i.e. the direct effect of hypoglycaemia is only one possible way to stimulate glucagon release, among many.  Which is a convenient smooth transition to:

Like with insulin, all manner of regulatory and counter-regulatory stimuli affect the release of glucagon, apart from hypo and hyperglycaemia. It would probably be easiest to note these as an unordered point-form list, as this is probably how they would be asked in an exam (eg. "list the factors that affect glucagon release").

The autonomic control of glucagon secretion needs to be expanded somewhat, as it seems to be fairly important. Ahren et al (1987) zapped the pancreatic sympathetic nerves of a dog with 10 mA current and noted a marked increase in the secretion of glucagon, which was largely replicated by infusing noradrenaline directly into the pancreas. Counterintuitively, vagal stimulation also increases glucagon secretion, albeit to a lesser extent (and apparently via a mechanism which is unrelated to muscarinic acetylcholine neurotransmission, according to Ahren & Taborsky, 1986).

Again, like with insulin, glucagon secretion varies over the course of a day, and includes basal and postprandial components. Yes, reader, this does mean that at any given time under stable fasting conditions there is some simultaneous insulin and glucagon secretion, producing two competing effects on macronutrient metabolism. When textbooks mention this, they usually produce some diagram demonstrating a mirrored rise and fall in hormone concentration, and of these the most illustrative is the one from Hellman (2009), where isolated islets were perfused with 20mmol/L glucose solution: 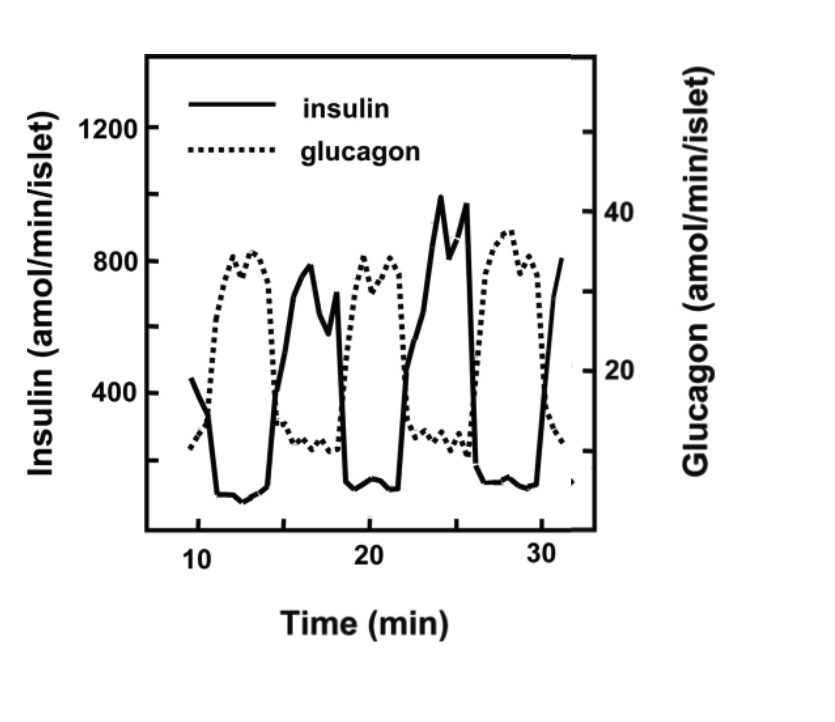 So: insulin increases, glucagon decreases. This is logical. Part of the reason for this is the effect of glucose which does something different to hormone secretion in α- and β-cells, and part of it is the paracrine inhibitory effect each hormone have on each other.

Unlike insulin, which has a massive 320-kDa receptor complex with an intracellular tyrosine kniase domain, glucagon binds to a relatively modest G-protein coupled receptor which only weighs something like 90 kDa. Specifically, these receptors are coupled to Gs and Gq.

Insulin receptors are literally everywhere, but not so much for glucagon. Watanabe et al (1998) found them in the brain small intestine and kidney, but the liver has by far the highest density of receptors. From this, it logically follows that glucagon should mainly have hepatic effects. Which brings us to:

That stable basal rate of glucagon release, that sustains a certain level of hepatic glucose delivery in the fasting state?  Shame if anything were to happen to it, said Liljenquist et al (1977), as they severed the endocrine chain of command by pumping somatostatin into "four normal men". Turns out, of the basal glucose secretion by the liver between meals, about 75% is the result of basal glucagon stimulation. The investigators were forced to administer exogenous glucose (about 100mg/min, or about 30mmol/hr) so that their subjects would maintain a stable BSL.

So, in short, glucagon is critical for the delivery of glucose to the tissues.

How does this work? Like insulin, several steps are involved, the molecular biology of which would surely depress and bewilder the CICM exam candidate. It is better to present the final effects, which was also the course taken by Rix (2015).

Additionally, glucagon has some low-key influences in other organ systems:

In vast supraphysiological doses, glucagon has one last effect that needs to be discussed. It increases cardiac contractility by a mechanism that is thought to be related to the generation of intracellular cAMP. This bypasses the normal mechanisms of cAMP signalling, as it activates adenylyl cyclase without having to stimulate the adrenergic G-protein coupled receptors. The natural logical extension of this mechanism would be to use glucagon to bypass those receptors if they have been blocked, for example in β-blocker overdose.  This has been around for a while, i.e. there are case reports of glucagon as an antidote dating back to 1976, but most modern authors tend to agree that high dose euglycaemic insulin therapy is superior. White (1999) discusses the mechanisms and various disadvantages of this technique in an excellent review paper, and the interested reader is redirected there with the caveat that modern CICM exams are highly unlikely to ask about this subject.

Liljenquist, J. E., et al. "Evidence for an important role of glucagon in the regulation of hepatic glucose production in normal man." The Journal of clinical investigation 59.2 (1977): 369-374.

Roden, Michael, et al. "The roles of insulin and glucagon in the regulation of hepatic glycogen synthesis and turnover in humans." The Journal of clinical investigation 97.3 (1996): 642-648.